Keerthana Ravi of the RasaBodhi Arts Foundation recently organized the four-day virtual dance event Evam on the digital platform Shaale.com. In previous years, Evam has been a unique, crowd-funded classical arts festival held in Mumbai. This year, each performance stood out for its innovation, creativity and perfection.

The first day featured three dancers who were a part of a bigger production  curated by Usha RK titled Veer Bala. The production features the stories of three brave Indian queens who fought for their people – Rani Lakshmibai of Jhansi, Kettur Rani Chenamma and Rani Rudrama Devi of the Kakatiyas. These were portrayed by Poorna Acharya (Kathak), Shivranjani Harish (Bharatanatyam) and Dakshina Vaidyanathan Baghel (Bharatanatyam).

The programme started with a clip of Bharatanatyam dancer Prachi Save Saathi dancing at the Mumbai seaside on a concrete path. It must have hurt, but her footwork was smooth and so was her dancing.

The stories of the three brave queens, said Usha RK in her introduction, showed that bravery was not restricted to men and that in our Indian history, we have had equally brave women warriors. The dancers fit their characters well. 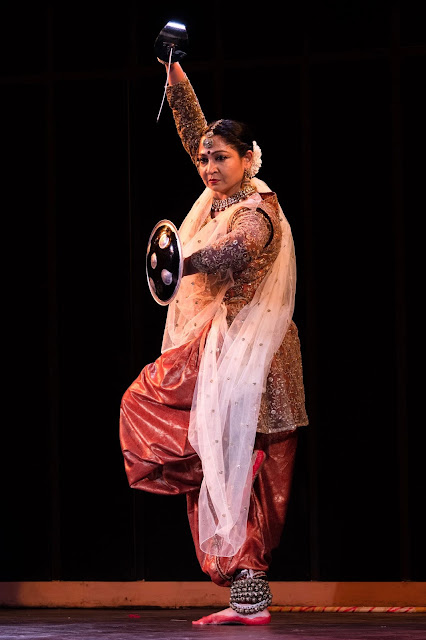 First was Poorna Acharya playing the Rani of Jhansi in Kathak. She wore a red costume and a huge nath. She took stances showing valour, doing fighting gestures in chakkars. The story of Rani of Jhansi is familiar to all – she was widowed young and was a mother to an adopted infant when her husband died, but she put aside her grief to raise her son. Poorna was able to show in her bhava how she put her son to sleep, covered him, fed him, and then when she had to fight the Britishers, her depiction was of the rani wearing her armour and carrying her child on her back, tied to a cloth around her chest. It was effectively portrayed, but the lighting at times was tinged with too much blue.

Poorna’s storytelling was quite effective and at times, she really shone in her gestures. The nritta was neat, with footwork and bols, but there were abrupt breaks at times in her storytelling and I found her sometimes lacking in balance in her stances.
-- 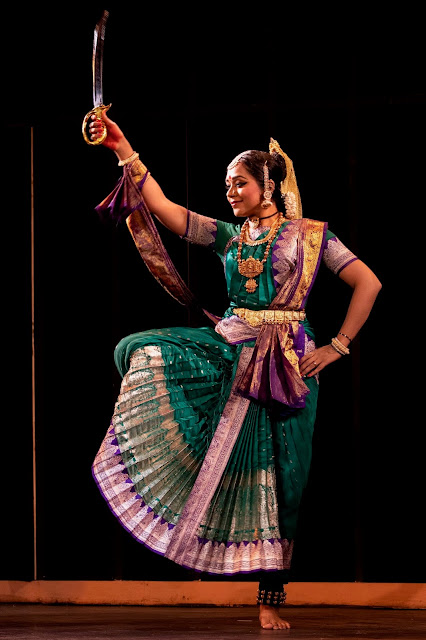 Kettur Rani Chenamma was a brave woman who was adept at sword fighting, archery and horse riding. Her husband was Raja Malasraj, who died in 1860; thereafter, she adopted a son and fought the Britishers for her kingdom. Shivranjani was very appropriately dressed in a red sari, wearing all the finery of a queen. The nritta portions were very neat, the footwork rhythmic, hands moving precisely, the dancer covering the stage. Her live musicians complemented her performance. Her strong point was her abhinaya, which she used in depicting the sequences in the story. She showed how the queen, as a girl, did not like playing but was trained as a warrior, and then the death of her husband, her coronation as the queen, how she was attentive to her people and chose to adopt a son from among them. Her very emphatic ‘no’ to the kappa or tax demanded by the British collectors was depicted through vachikam abhinaya. Then the depiction of the war scenes, her hiding and entering the war zone, and finally, the coronation of her son. The queen is described as veer nayaki, nirottama, and the portrayal was also very strong.
--

Dakshina played Rani Rudrama Devi, another great warrior queen of India. I have watched Dakshina perform this live before the pandemic (click here for the earlier report). Historical records place her death in two different years, and one explanation was that portrayed by Dakshina. The rani faced a dilemma when her army was betrayed by an insider, Ambadeva. She chose to escape the battlefield undetected and sneak back into her palace, where she lived for many more years and trained her grandson Pratap Rudra in warfare and governance. That might be the reason for the earlier date ascribed to her demise, when it was presumed she was killed in battle. Among the exemplary changes she instituted from behind the scenes was the storage of rainwater in reservoirs to aid agriculture during the dry season, and the recruitment of non-aristocrats as warriors. When Pratap Rudra came of age, he fought and defeated the traitor Ambadeva, upon which, it is said, Rudrama Devi finally left her body.

Dakshina began her performance very dramatically, holding the first stance of keeping one leg up and folded, supported by her hand, staring straight ahead, moving up and down gently with one hand raised, as if riding a horse, galloping towards the warzone. She was costumed in a red sari with a green blouse and a turban on her head. The next few scenes were of sword fighting with the soldiers of Ambadeva, a traitor in her kingdom, and Rani Rudrama Devi getting hurt and falling at the end of the war. That was again a very dramatic moment, when Dakshina portrayed a sword stabbing her in the stomach, her falling in pain and then bravely getting up to remove the sword from her stomach and tying a piece of cloth on her abdomen. She pays obeisance to the Kakatiya flag and makes a pledge to seek revenge from her enemy and raise her grandson, Pratap Rudra, to become a great warrior. As she is leaving the battlefield as a loser, she faces the dilemma of whether to stay on in the war and fight to death with her comrades or escape like a coward and save her grandson. But her honour loses to her pledge to raise an army against Ambadeva and avenge her kingdom.

The further portrayal by Dakshina of gathering some of her countrymen and escaping to her grandson was done very aptly. The bols and jathis for the fighting scenes had the rhythm of the war drums. She goes into hiding and raises her little grandson, training him in sword fighting. Here again was very sensitively performed abhinaya where she gives a small sword to her grandson and does baby moves of sword fighting. Then she went on to show how a great warrior, Pratap Rudra, was being reared: Rudrama Devi feeding him, loving him, and then finally, putting the rajya tilak on his forehead when he is grown up. And then there is the war again between Pratap Rudra and Ambadeva, the traitor. Dakshina showed the depth of Rudrama Devi’s devotion to her kingdom as she puts the dust of her land on her head and salutes the flag as she watches her grandson fighting through a window. Again, she reminisces about being torn between her duty and her honour, how she had secretly left the kingdom and secured her people, how she had reared Pratap Rudra and how, now that he has won the war against Ambadeva and the war drums are playing to declare him the victor, he’s being showered with flowers as the Kakatiya flag flies high. As her duty is done and her past undone, she heaves a sigh of relief and falls to her final sleep.

Dakshina is a dancer of great virtuosity and she will keep the flag of her family, which has greats like Guru Saroja Vaidyanathan and Rama Vaidyanathan, her grandmother and mother, flying high. Her technique comes out as flawless and she absolutely melts into her character. And as she always says, she doesn’t have to step out of her technique for the portrayal and abhinaya. This is a performance worth a watch.