Rajasthan Academy organized an event titled Ojaswini on 5th June at the IHC in Delhi. The performance explored the ashtanayika as described in Geet Govind by Jayadev. The performer of the evening was Dr Sandhya Purecha, a Bharatnatyam dancer and dance teacher. She is the director of Kala Parichaya and secretary of SBBNT&RC (Shri Sarfojiraje Bhosale Bharata Natyam Training and Research Centre). She has been trained under Acharya Parvati Kumari in the Thanjavur style. She has been awarded the Sanskrit Sadhna Puraskar by the government of Maharashtra, and has done a doctorate in the Natya Shastra. 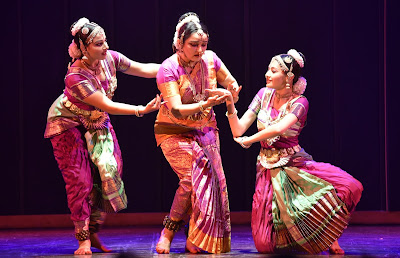 The ashtanayika has been visited frequently by many dancers, but the music and poetry are differently interpreted each time. Speaking on the concept, Sandhya said, “I am basically a Sanskrit student and did my MA and PhD in the Natya Shastra. For the concept of ashtanayika, what came to my mind was the gentle lyrical poetry of Jayadev’s Geet Govind, where Radha takes on the virtues of ashtanayika. The purpose was to merge the Natya Shastra and Geet Govind, and I also found many paintings on Geet Govind and the ashtanayika. So I decided to combine them in a performance showing literature, dance and paintings. The music was composed by Shivaprasad, and the original ragas from Geet Govind were changed to suit the dance. The ideology behind the poetry is that selfless love becomes immortalized, since we worship Radha-Krishna, and not Rukmini-Krishna.”

Sandhya began her performance with her discipes, Mandira Joshi and Suhani Dhanki, dancing the Ganapati Kautukam in raag Nattai, Aditalam. Geeta Govind by Jayadev is poetry about Radha and Krishna - their union on the earthly level is that of meeting and separation and on the spiritual level that of merging of the soul and the Almighty. The first nayika portarayed is the abhisarika. She dresses up and leaves to meet her beloved, giving up her modesty in her desperation. Next is vasakasajja, who dresses up for the union and adorns her room with flowers and scents. 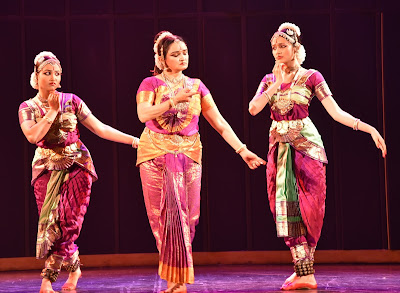 When Radha cries for Krishna, misses him, she becomes the vipralabdha, who is insulted and deceived. When Krishna appears with signs of lovemaking, hair on his clothes, lips that have been kissed, Radha becomes the khandita, who is distressed. When she becomes jealous and agonized by the separation, she becomes the kalanaharita. Krishna then tries to appease her . ‘Priya charushile’ is a famous ashtapadi by Jayadev where Krishna asks for the lotus feet of Radha to be placed on his head. Radha and Krishna then are united. She dresses up again for the union, applies chandan on her chest, wears her ornaments, and appears before her beloved. 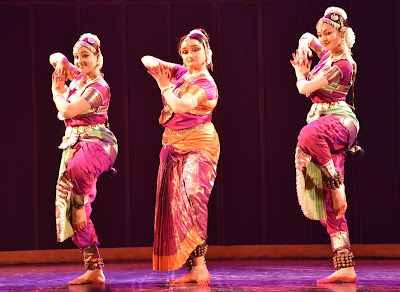 The performance started on a slow note with the separation and annoyance, but as the disciples joined in the dance, it picked up tempo and Krishna (Shanti Mohanty Dave) did a wonderful performance. Their stances to show the union of Radha and Krishna were also well-coordinated. The only drawback was the clumsy organization of the event – there was even some shifting of furniture during the event! The accompanists were Satish Krishnamoorthy on mridangam, violin by  Shridhar Parthasarthy, flute by Vijay Tambe, vocal support by N N Sivaprasad and natuvangam by Dr Sandhya V Purecha.

Nalini and Kamalini Asthana, renowned Kathak dancers of the Varanasi gharana, interpreted the virahotkhandita nayika, who is sad at the separation from the beloved because of his preoccupation. For this, Nalini performed an abhinaya piece on Yashodhara, Buddha’s wife, taking excerpts from Maithili Sharan Gupt’s poem ‘Sakhi ve mujhse keh kar jaate’ (also called ‘Yashodhara’). Next, it was the proshit bhartika nayika, who is in a state of distress, since her beloved has gone to a far off land, leaving her in solitude. The heroine laments that she feels only solitude in all the seasons, all round the year. That note ended the evening, which had been an interesting mix of experience and young talent.