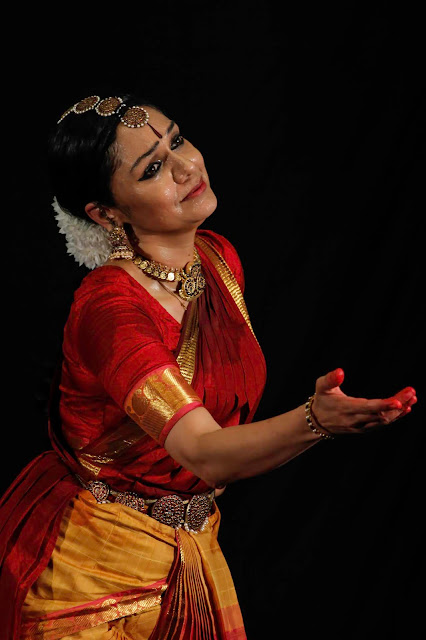 Day two of the digital festival Evam, presented by Keerthana Ravi’s Rasabodhi Arts Foundation, presented Guru Rama Vaidyanathan dancing the Bharatanatyam margam, then and now. A margam presentation is seen by the conservative viewer as the reinforcement of the traditional repertoire, where you go step by step to each piece as it comes in the sequence set in the tradition. But by the younger audiences, it is seen as too long to hold their attention unless you add a novel or dramatic element to it, or tie up the pieces in such a manner that it becomes relevant.

Rama Vaidyanathan developed a very imaginative and abstract way of presenting the margam, then and now – before the pandemic and after – and how it becomes relevant to our times. She has performed the margam using rare traditional compositions which not everybody performs.

The first one was a mayur alarippu (which I have watched and written about many, many years ago). I have seen it earlier also – she brings out the moves of the peacock very gracefully, with very gentle, expansive movements, since the peacock is a very beautiful bird and very royal in its gait. The peacock dance has to be brought out with a lot of grace and beauty in the movements. Her nritta was very well-defined and you cannot comment on the technique of a guru of such high stature, but every move comes out so clean. She used very smooth neck and eye movements, very expansive hastas to show the plumage of the peacock, and leaps, with the body movements showing a lot of flexibility and pliability. It was a pleasure to watch, particularly the shoulder, neck and eyes, which moved exactly like that of a peacock. She wore a red and blue costume for this piece. She blended Bharatanatyam gracefully into the gait of a peacock, which is very slow and rather royal, with pauses, looking around, leaping forward and then moving hither and thither.

Next, she performed a varnam, a composition of Shri Shyama Sastry in ragam Anandabhairavi and ata talam. This is again a rare composition where the nayika, a devotee of Lord Vishnu, is speaking to her sakhi. Here, what is of note is that the live accompaniments, the vocals, the flute, nattuvangam and mridangam, everyone deserves a big applause for their contribution. The nattuvangam was by Dr. S. Vasudevan, vocals by Sudha Raghuraman, mridangam by Manohar Balatchandirane and flute by G. Raghuraman. Sudha sung the varnam very melodiously.

The nayika is telling her sakhi to go to the lord and tell her about her eagerness to meet him. But here the interesting part: when the sakhi asks who her beloved is and what his name is, the nayika does not want to say it, as is traditional – you do not speak your beloved’s name. So she is trying to give her sakhi clues about who he is.

The depiction started with a melodious flute, which made the entire atmosphere come alive with the jathis. The nayika is trying to tell her sakhi that he is the one who is reclining on the ocean. And then she says that from the ocean, it is the conch which is brought out and he is the one who holds that conch in one hand. As she sees the sakhi absolutely clueless, she shows her the chakra with the finger rotating and tells her that he is the one who holds that chakra in his hand. She shows her the lotus that is growing in the pond as the next thing that he is holding in his hand. And that he wears a tilak on his forehead. As the sakhi shows some signs of recognition, the nayika tells her to now hurry and go to him.

The abhinaya by Rama was done with a slight touch of humour. The nayika, besides being very expressive, adds a bit of humour into her clues, which makes it very interesting to watch. The jathis she did after this piece were full of energy and playfulness. Subsequently, the heroine tells her sakhi, o lotus-eyed one, now that you know who he is, do not waste your time since time is precious and I am pining for him. Rama, again with a sense of playfulness, depicted the nayika showing her sakhi the pendulum rocking to and forth. She keeps telling her, o lotus-eyed one, the pendulum as the timekeeper is moving on and time is passing, shown by the clicking of her fingers, so she should stop thinking now and wasting time, and immediately go and find him. She wants the sakhi to express her feelings and convey her distress to her lord. This was followed by very rhythmic jathis.

In the third sanchari bhava, the heroine expresses her urgency to the sakhi to be close to her lord as Kamadeva gives birth to desire within her. For this part, Rama depicted the bhanwara hovering over the flower relentlessly. In this, her neck, arms and shoulders moved with the eyes very rhythmically to show the hovering of a bumblebee or bhanwara on the flower, looking for a chance to sit on it and suck the nectar. The jathis that followed were appropriate to the energy of the piece.

In the fourth part, she shows the procession of Lord Varadaraja as he rides on his mighty Garuda and how the nayika feasts her eyes on the beauty of the lord. She showed the procession moving, showing the palki’s movement, swaying, calling all in excitement, and how lord Varadaraja is riding on it, holding his shankha chakra and gada padma. The nayika is admiring herself in the mirror, checking whether she is dressed appropriately to attract him, and the nritta for the jathis was very expansive.

In the charnam, the nayika tells Kamadeva that he has been shooting his arrows at her, and her entire body burns from the arrows that he has relentlessly shot at her. She might die from the agony. In this particular piece, Rama’s abhinaya showed the varied moods of the nayika, showing not only her pain as she yearns for the lord’s love, but also giving it a slight tart and humorous tinge. She went on to show how she is being struck by Madana’s arrows from every direction, which are piercing her entire body, how she is moving aside to evade the arrows. Then she challenges Madana to shoot more arrows at her: how many more does he have in his quiver? How many more flowers? He can shoot all of them if that pleases him. At times, she shows the nayika taking the arrow head-on and showing Madana that maybe it is not having the intense effect that it is supposed to have. She performed jathis depicting flowers, bows and arrows. Even vocals suited the varied moods of the nayika. She finally closed the performance in a reclining position. This last piece showed how many types of abhinaya or how many varied forms of abhinaya Rama has in her arsenal, and how well she can express herself through varied moves, expressions and eye movements.

Next, she performed a rare kshetrayya padam in raag Dharmavati set to mishrachapu talam. Dr. Anupama Kylash was credited with helping her translate the Telugu lyrics of this padam. The music was by Sudha Raghuraman. The padam features a swadheenabhartrika nayika and it has layered meanings, which Rama found to be relevant in these difficult and unpredictable times. The padam is about life’s ups and downs, joys and disappointments, and delivers life lessons about fortitude and equilibrium in turbulent, unexpected times like the COVID-19 pandemic and sudden lockdown. It deals with the positives and negatives that are bestowed upon us by the lord Muvagopala. The nayika wholeheartedly accepts whatever her lord chooses for her. Rama began the depiction with lotuses and flowers growing around her, their scent filling the air, and then the thorns that are in her path to her lord, along with the flowers, where she treads carefully. She describes her manasthiti as sthir, whether it is this way or that way. The nayika is telling her sakhi that whether he comes close to her or distances himself from her, she is okay with both. For this piece, Rama wore a white sari with a green blouse. Whether it is the weighing scale of paap or punya, whichever weighs more for him, she is fine with it. Whether he holds her hand and leans on her shoulder or goes away, whether he comes close to her to kiss her or treats her like a child and moves away from her, she will take it in her stride. Whether he plays the flute for her or not, and whatever is in her destiny, or whatever he chisels her into, she is fine with it. Whether he wants to include her in his raas leela, embrace her, wipe her tears or simply forsake her, she is ready for it. Finally, again, Rama depicted the flowers and the thorns with a very contented expression to show that she is not going to be daunted by whatever he does to her.

Finally, she presented a thillana on Skanda shashti. It is an ode to lord Karthikeya based on the kavacham by Devaraya Swamigal, adapted by Sudha Raghuraman. It expresses the joy and ecstasy of the bhakta as he describes the attributes of the lord. This was a very different kind of thillana because in a usual thillana, the nritta anga is dominant. But in this one, she did the abhinaya for the attributes predominantly and then carried the bhava further in her jathis in the nritta.

The entire performance was a feast of technique and abhinaya, an exemplary margam, and Rama ji chose to make a statement about the state of mind during the pandemic: whether the gods are favourable or adverse, the spirit of the arts is resilient.