ONLINE: Vaibhav Arekar moves and provokes as Krishna in Venugaan for Evam 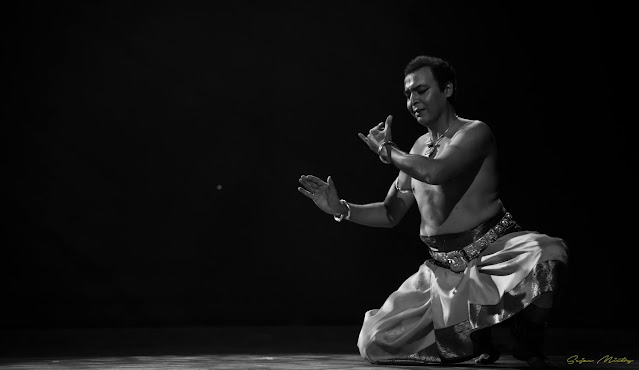 The third day of the digital festival Evam featured Vaibhav Arekar staging the Bharatanatyam dance-drama Venugaan. The premise was novel and the concept and presentation quite engaging. Dance, drama, poetry, music and sahitya all came together to create rasa.

Lord Rama is usually called the maryada purushottam. He embodied all the virtues that a human should have. He was a good son. He learnt his vidya as his guru’s best disciple. As a great dhanurdhar, he vanquished asuras. He was a good husband , a good father and a good king: exemplary for mankind. But Lord Krishna was always ishwariya. He killed demons from his cradle. He snatched food from his sakha’s mouth as a cowherd. He stole butter and the clothes of the gopis while they bathed. As a teenager, he was the beloved of the gopis and the priyatam of Shri Radha. Surprisingly, he never married Radha. He went away to Mathura to become a king and then, when he started marrying the women he had rescued – 16,108 queens – he went on to become the great messenger of life lessons on one hand, and politics on the other, in the Mahabharata. Finally, he vanquished his own clan. It becomes difficult for anyone to believe in all this unless you know that Krishna is god and whatever leelas he did was for the greater lessons of aatma and paramatma. Here, we had Vaibhav Arekar depicting Krishna as an ordinary human being living an extraordinary life and his emotions herewith.

He started his storytelling with the shlokam ‘Kasturi tilakam lalatapatale’, a blue light spreading all over the stage, ‘sarvange hari chandanam’. He wore a yellow dhoti for the piece and proceeded to perform a dance to Madhurashtakam, ‘Adharam madhuram’. He depicted the entire Madhurashtakam with abhinaya and stances with very expansive movements that truly helped you envision the god. Then began the monologue by Krishna the human. The lighting and the grief he portrayed created the convincing effect of a man lamenting his life, not a god. Lying down in sleep, he suddenly calls out for Radha. The sound of the bansuri reflects the darkness in his life. He is curling and cringing while lying down. With the lights dimmed and the partial darkness, it was scary imagery. Restless, he talks to himself. That he is the Krishna who gave the life lesson to humanity and today, ‘apne aap ko pehchanne ka prayas kar raha hai’.

And then Arekar bends to look at a shadow of himself. Shadows appear around him and Krishna says, ‘Darshak se abhineta main kab ban gaya? Har leher ka dhwast hona maine dekha.’ And then he goes into flashback, reminiscing about the playing of the bansuri, taking his cows to graze near the Yamuna. His feet are adorned with chandan. He plays with the cows in Vrindavan and at dusk, gradually leads them home. The composition used after this scene was ‘Chandan charchit neel kalevar’. It talked about his vasant kundal, the heart-warming smile. Vaibhav Arekar depicted Krishna walking around with attitude in Vrindavan and then he showed the raas leela on the shores of the Yamuna. As he dances, he is kissing and frolicking with the gopis and then he is reminiscing about Radha, whom he embraces and kisses. As this beautiful dream comes to an end, Krishna calls out for Radha in despair. Arekar was able to convey the pain and the agony of Krishna in viraha.

He went on to depict the life of Krishna after he leaves Gokul for Mathura, talks about the 100 lotuses that he sent to Kansa. After vanquishing Kaliya Nag, the elephant Kuvalayapeedh was vanquished, which was followed by a fight with Kansa and the final blow to kill him. This was followed by the coronation of Krishna as the king of Mathura and was made to wear the king’s crown and the rajtilak adorned his forehead. Then came the war of Mahabharata and how Krishna was made to play the central role in this war, guiding the Pandavas to their victory. Some poignant moments were shown where Krishna is seen wondering about Draupadi and the cost of the war – that if she had five husbands, then did one more man need to have been the cause of a war? Vaibhav then went on to show how Krishna is struck by an arrow in his foot, fulfilling Gandhari’s curse. Grappling with the pain of it, he meets his end all coiled up, lying down in the foetal position. All the memories of his childhood – that of mother Yashoda feeding him, his frolicking play and leelas in Gokul and Vrindavan, flash through his perception.

This particular production was really gripping and thought-provoking. For a production broadcast online, the pauses could have been shorter, I felt. But the amalgamation of acting, speech, dance, music, light and story made it a fine work of art.