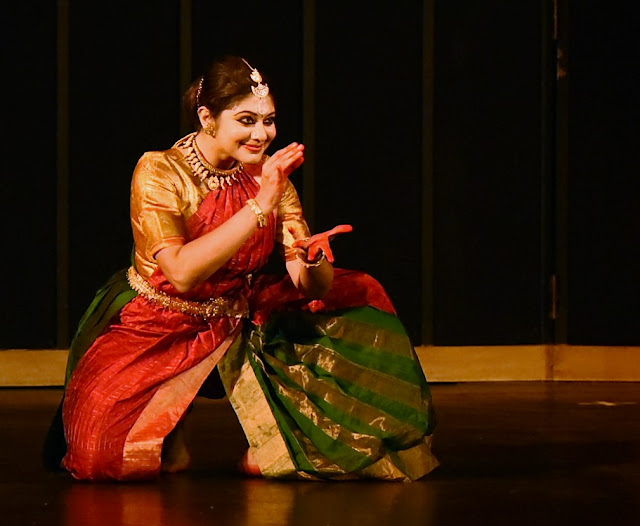 It is always a pleasure to watch the talented disciples of Guru Saroja Vaidyanathan ji, with their perfect Bharatanatyam technique and their nritta and nritya, weaving stories to bring out the natya element in dance. Tilakam was an event with three stories of three women’s valour and wisdom – Rani Rudrama Devi, Amba/Shikhandi and Sita. The event was called Tilakam for their three distinctive tilaks.

The first to perform was Dakshina Vaidyanathan Baghel, portraying Rani Rudrama Devi. Dakshina is a skilful, dazzling young dancer, the disciple of Saroja ji, her grandmother, and Rama Vaidyanathan, her mother. 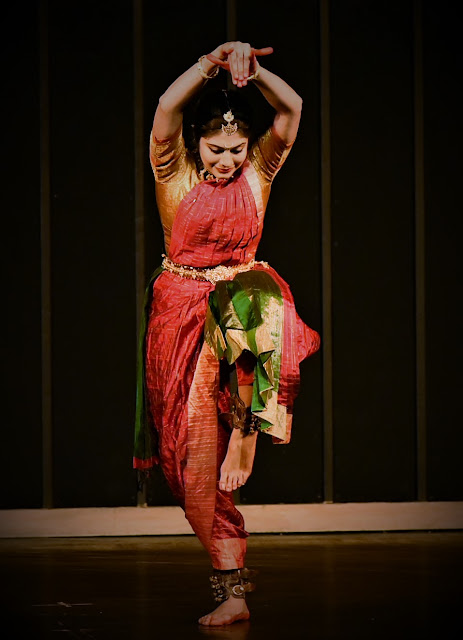 Rudrama Devi was a great warrior but was betrayed by a traitor, Ambadeva, in her own kingdom. She somehow manages to run away from the battlefield to save her own life and the life of her grandson so that she can win her kingdom back in the future. She secretly prepares her grandson, Pratap Rudra, to rule the Kakatiya dynasty. And at last, when she closes her eyes, Pratap Rudra has grown into a fine warrior and the king of the Kakatiya dynasty. 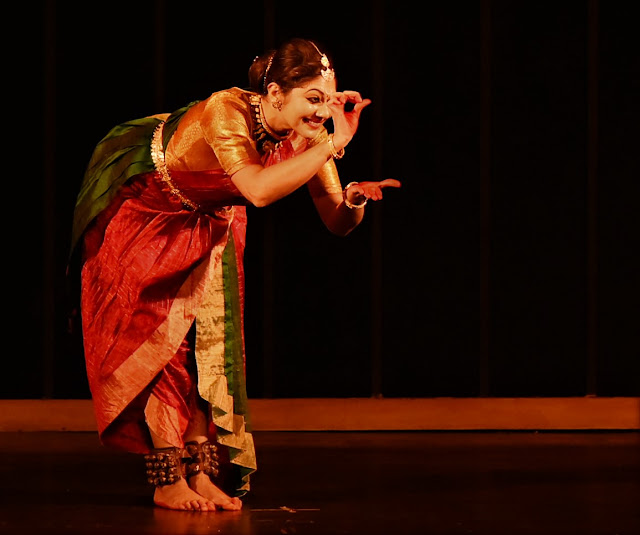 In her depiction, Dakshina showed Rudrama Devi fighting the traitors, led by Ambadeva, in her kingdom. She is struck on her back and falls backwards. Injured, shaking, she lies on the ground, having lost the battle. With an arrow piercing her, she summons the strength to lift her flag and look at it with pride. 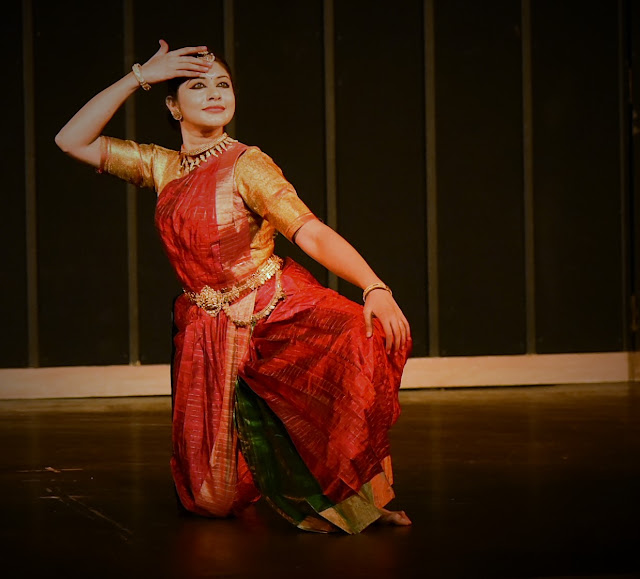 Dakshina evoked awe with her abhinaya of the queen’s pain and bravery. She pulls out the arrow, dresses her wounds and secretly takes away her grandson. She lives incognito to raise him. She teaches him sword fighting. Dakshina depicted the child trying to hold a sword – she performed perfectly the childlike movements. The grandmother feeds him, fans him and puts him to bed. 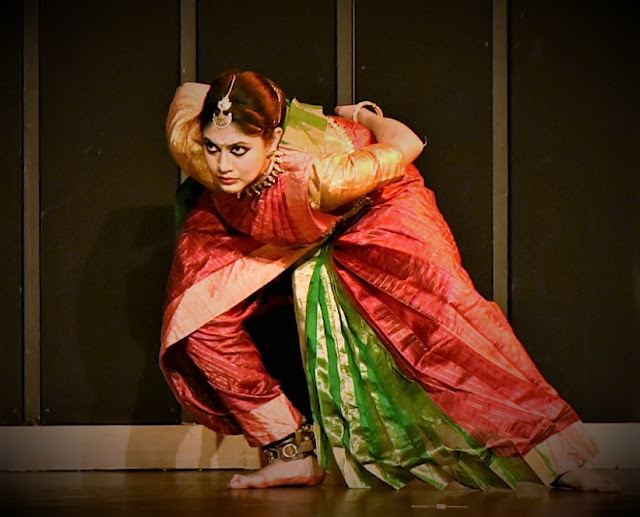 The queen reminisces about how she fought for her matribhoomi and how pained she was to see her people dismembered and dying on the battlefield. It was then that she vowed that their sacrifice would not go in vain. Dakshina’s expressions were intense and her large, eloquent eyes exuded the character’s anger. She portrayed how Rudrama Devi had taken her grandson and run away from the battlefield, living secretly behind guarded gates. There, amid the triumphant naad of trumpets, she had crowned her little grandson as the king and pledged to protect him. 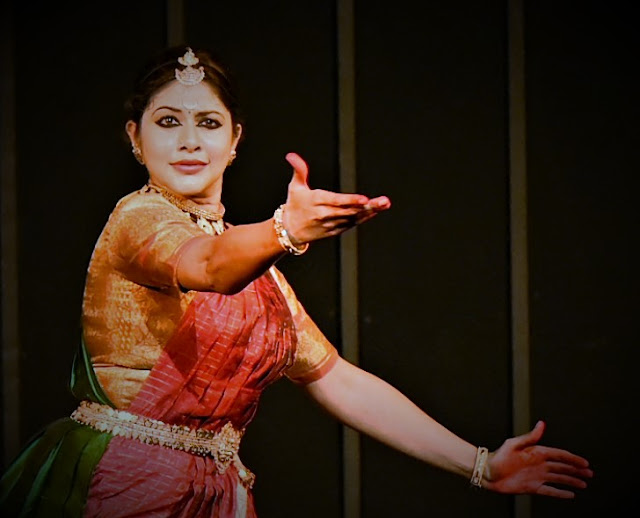 Dakshina depicted how she takes care of the needs of her faithful people as they are readying for a war. The boy grows up into a fine warrior and finally, she sends him away to the battlefield, adorning him with a vijay tilak, a sword and then an aarti. 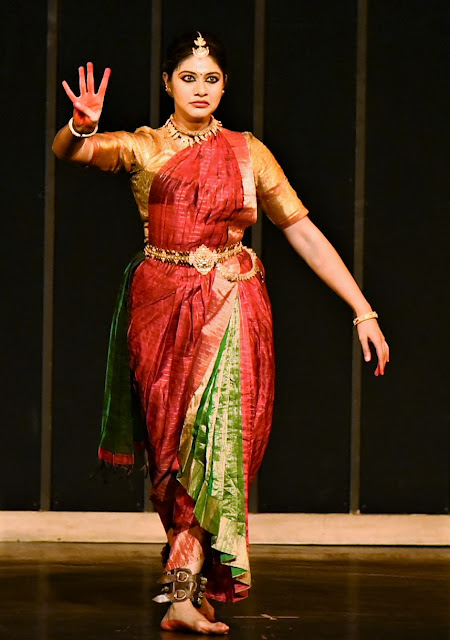 As her grandson fights, she looks through a small window to catch a glimpse. He wins the war and chants of ‘Jai Ho Maharaj’ ring out. Flowers are being showered on him and the flag of the Kakatiya dynasty flutters in the wind. 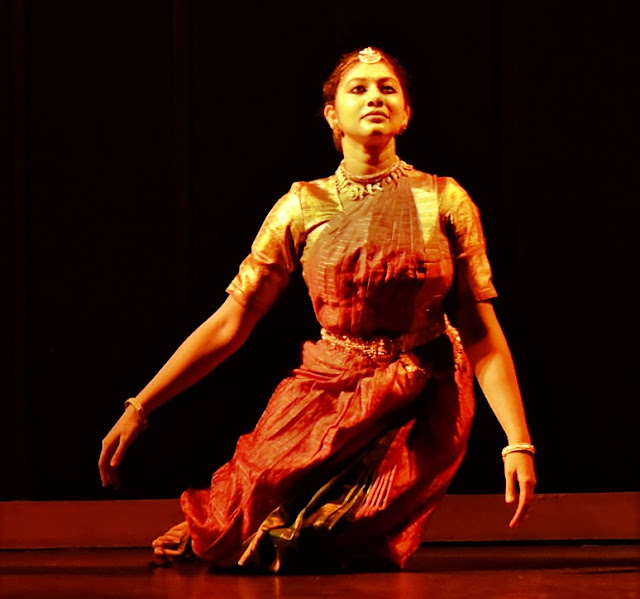 It is then, when her vows are fulfilled, that Rudrama Devi gives up and shuts her eyes forever. It was a very intense performance as Dakshina traversed every nuance of the story, presenting every emotion. A brave warrior depicted by a bravura dancer. Her costume, too, was very aesthetically designed. Next was Himanshu portraying Shikhandi, which I have covered extensively twice – click here and here for the reports. It is clear that he gets better with every iteration of his principal choreography.


The third to go on stage was Anuradha Venkatraman, a senior disciple of Guru Saroja Vaidyanathan. She performed Vaidehi: The Untold Story. I saw/heard this story for the first time here and I think it is not common knowledge. Sita, as we know, is not subservient to Rama. In fact, she complements and completes him. It was Valmiki ji and Tulsidas ji, in the Ramcharitmanas, who talked about the strength of Sita’s character. In fact, she is the embodiment of the trinity: creator, preserver and destroyer. 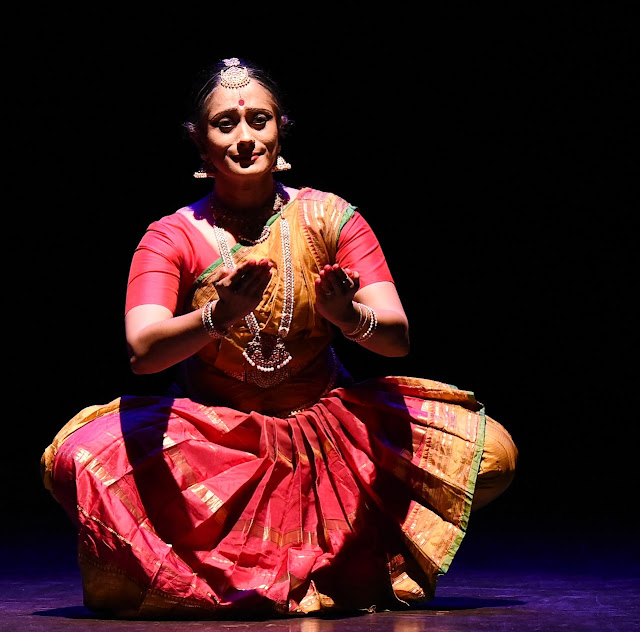 Ravana, after completing his tapasya, became so powerful that he was indestructible. He had earned the boon of ten lives and could only be destroyed when he lusted after his own daughter. In his arrogance, Ravana committed atrocities on the rishis conducting a penance to Goddess Lakshmi and drew their blood. Mandodari assumed this blood was poison and drank it – she wanted to kill herself to escape life with Ravana. However, she became pregnant with Sita but was so distressed at how she would explain the pregnancy that she aborted her foetus in a field. 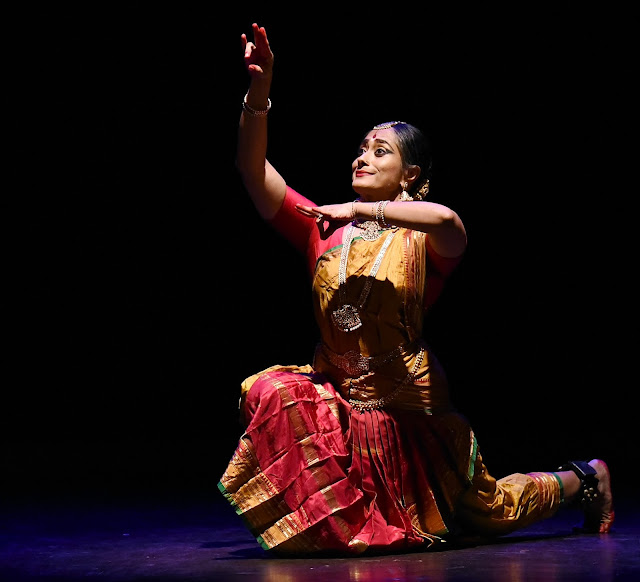 On the other hand, Raja Janaka of Mithila, as part of a yagya, was tilling that field with a plough. He finds Sita buried in the soil and takes in the beautiful baby to rear her as his daughter. Sita grows up to be very beautiful and powerful and one fine day, while cleaning, she casually lifts the Shivadhanush that is lying in Janaka’s palace. So Raja Janaka decides that in her swayamvar, the groom would have to prove he was her equal by lifting and stringing the same dhanush. This is how Rama and Sita get married. 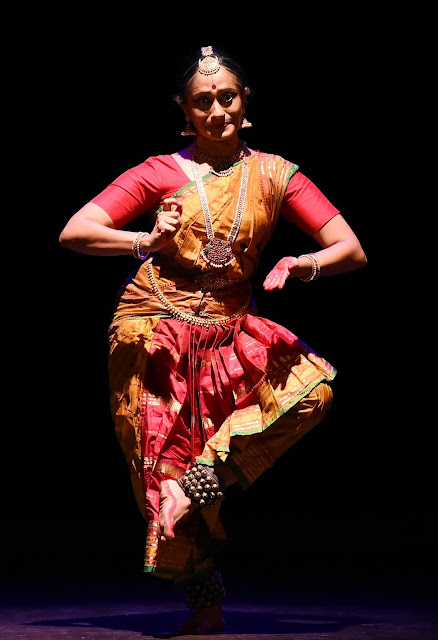 In the following sequence of events as we know them, Sita is abducted by Ravana without him knowing that she is his daughter, and hence, she brings his doom. The entire story is not oft-visited by dancers and so, the abhinaya had to be strong enough to communicate the entire sequence of events. 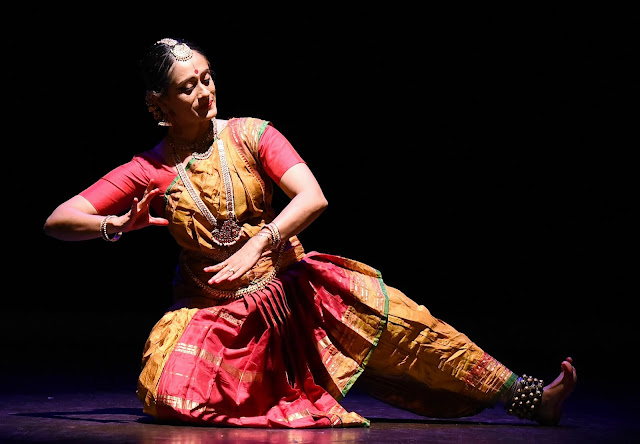 In the final piece, there is a conversation between Sita and Ravana in the Ashok Vatika. Instead of being cowed down, Sita tells Ravana to mend his ways. Sita does not even look at Ravana in the Ashok Vatika. She keeps a straw in front of her, showing Ravana how petty he was for her. She recounts the story of Pushkar Ravana or Sahasra Ravana, Ravana’s older brother, in Pushkar. 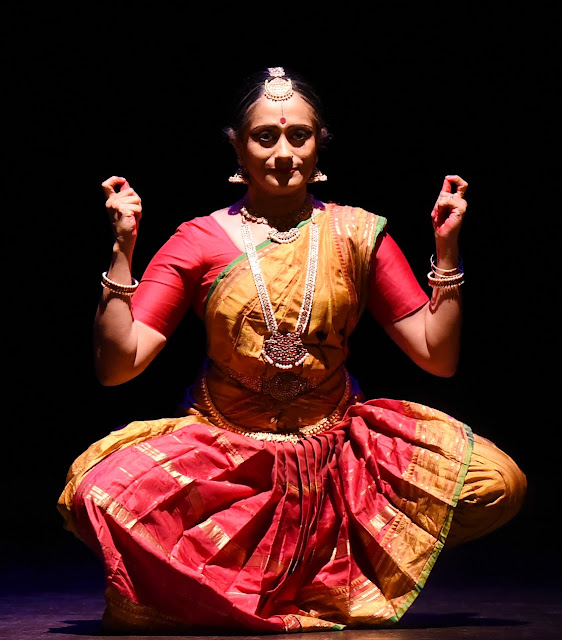 Rama was overwhelmed in the battle with the Pushkar Ravana, who had a hundred heads. It is then that Sita manifests herself as the devi, takes up Rama’s bow and arrow and vanquishes the demon. Even Rama was blinded by her radiance and power in that terrifying form and could not look at her. Rama then calms her down enough for her to return to her karunmayi roop. 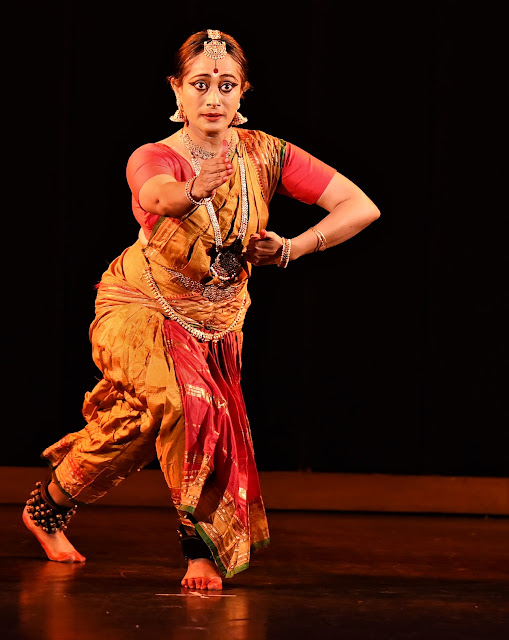 Anuradha began with an ode to Maa Sita, the one who is responsible for udbhav, sthiti and sanghar, addressing her Ramavallabha, pranavallabha, paying ode with stances, gestures and jathis. In the second part, Ravana’s attitude was depicted. The gait was brought out through jathis with leaps. Her gestures suggested his narcissistic traits, bringing out through her expressions the look in his eyes, his gait, calling himself supreme, like none other. 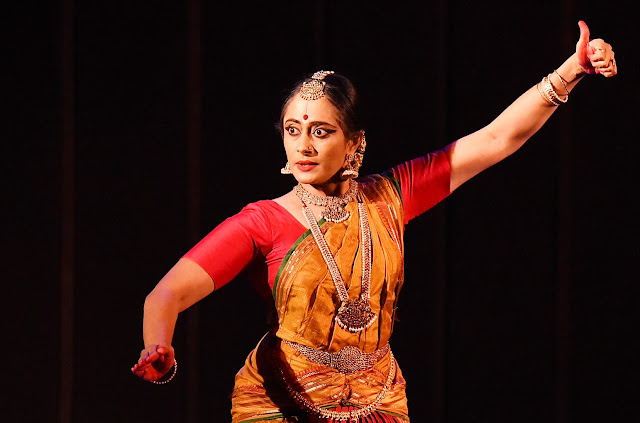 Further visiting the tale of Ravana, she depicted his tapasya to Lord Shiva for the boon of dasha shish, thus making himself the supreme ruler and invincible. And then he commits atrocities on rishis, collecting their blood. Anuradha depicted the plight of Mandodari as she drinks this blood and conceives Sita in her womb, her agony as she aborts the foetus and buries it in the earth. She went on to show Janaka’s yagya, his ploughing of the field and getting the baby out. At the end, she depicted the swayamvar where, again, Ravana’s arrogance and Rama’s humility were elucidated. Rama finally strings the Shivadhanush, even breaking it into two, to marry Sita. 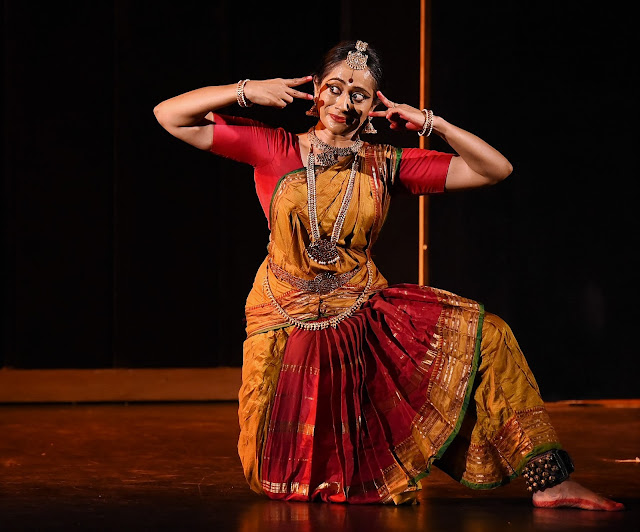 In the Sahasra Ravana episode, Anuradha depicted her as parameshwari, who looks bhayankar and vanquishes the demon. Rama calms her down as he chants ‘Om Sitaye namah janakiyaye namah ramayaye namah vaidehi’, and the goddess takes on the avatar of kripa with her hand in kripa hasta, blessing all. In this piece, Anuradha showed Goddess Sita as vishalakshi, gunasampanna and Rama as sharanagat vatsal. 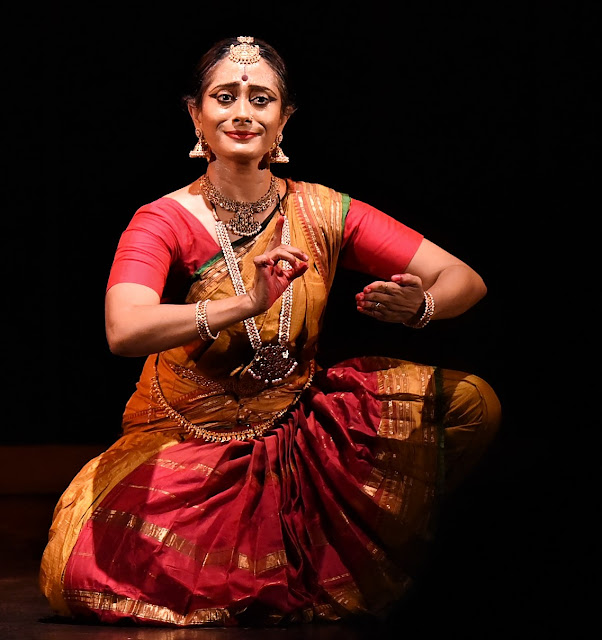 Anuradha excelled in her abhinaya, expressing a lot through her eyes, gestures, and stances. She used her technique, footwork, squats and hastas appropriately in her storytelling.

For Vaidehi, the choreography was by Anuradha, the music composition was by Vidya Srinivasan, rhythm composition by Ramamoorthy Sriganesh, vocals by K. Venkateshwaran and Srividya Ramanath, percussion and nattuvangam by R. Sriganesh, rhythm pads by Prasanna, flute by Vivek and veena by Pushpa Kasinath.