ONLINE: Swathi Madhavan is graceful as a gazelle in Vidha Lal’s Sankalp ep. 15


Before a break for Diwali, in the last episode aired of Sankalp: The Journey Shall Continue, Kathak dancer and teacher Vidha Lal presented a Kathak dancer from overseas. In that episode, Vidha first spoke about hastas and their importance in engaging with the audience, before the switch to Mulla Afsar Khan, Swathi’s guru. Afsar spoke about how Swathi first learnt Bharatanatyam and then learnt Kathak with great dedication. The young dancer has a Master’s in engineering and works as a freelance marketer. Afsar also said that when Swathi returned to Kathak practice after a year, in which she had a baby, she did so with double energy and displayed great commitment in her second innings.

Swathi began with a pranaam in a seated position, which was a very graceful and promising start. This she followed with a Ganesh vandana, ‘Vakratund mahakaya’, depicting Ganesha’s trunk through graceful hand movements. 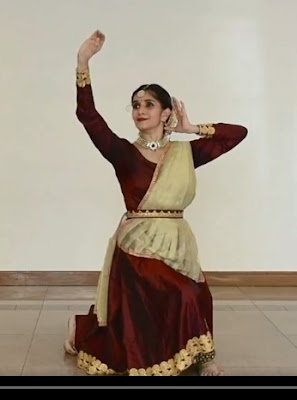 After that, she performed the technical part in teen taal solah matra. She started with a thaat aamad, taking graceful postures and performing movements with shifting feet. This was followed by a tukda, paran aamad and chakkars which were very neat, with great pace in movement. She moved around intelligently, utilizing the space available to her quite well. Her leaps were high, coming to sam very neatly. The Ganesh paran was executed with flair and neat movements, depicting elephant ears and the movements of the trunk, coming to a seated sam. Ginti ki tihai was presented with effortless footwork and a never-ending smile. Tukda and tez aamad were presented with precision and fast-paced chakkars. The entire technical portion was rendered well. The only thing to check was the lines of the hastas. Otherwise, Swathi’s Kathak was graceful, very fast-paced but controlled, elegant and neat. 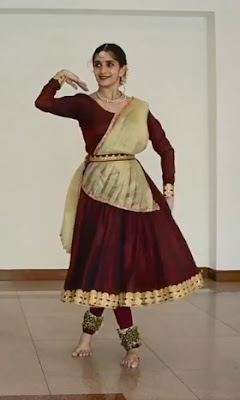 The final part was the bhava portion, in which Swathi performed a composition on saavan ritu. The piece started with very crisp padhant and equally crisp nritta on a parmelu with chakkars. All throughout the composition, the nritta and the padhant complemented each other to make it look specially sharp. Swathi depicted the lightning, the clouds, the rain, the earth, flowers, birds frolicking and flitting around, the deer jumping around, followed by nritta with tukdas, todas and paran. With delicate, graceful hand movements and mature bhava, she depicted butterflies, hans, chakor, the bhanwara hovering over flowers. The peacock movements were very graceful with movements of the neck, and the eye movements which were perhaps thanks to her training in Bharatanatyam. During the entire piece, I felt that if someone had not actually watched nature enjoying the rain, they would be able to see it here in her dance. The broad smile, the effortlessness, the frolicking like a gazelle, the flitting like a bird, all were there in her dancing. Here was a dancer who was thoroughly enjoying dancing the piece as much as the audience was while watching it. 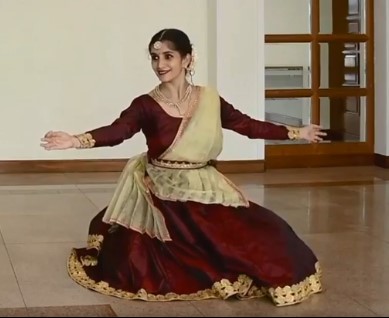 One of the high points of the performance was the broad and open ‘stage’, the wide coverage of the video, the visibility of the hands and footwork, the contrast of the background with the costume of the dancer, and how technology was used to shift the frame from one piece to the other. All these innovations dancers should look at now since they have a totally different platform to contend with. Hats off to Swathi: the pleasure of watching this flitting, frolicking gazelle of a dancer was totally mine. You can watch her performance here: https://www.facebook.com/VidhaLalKathak/videos/730573557665802