Even though everyone was hoping that the worst of the COVID impact was behind us, the numbers have soared again. It is clear that it will still be a long while before the performing arts can return to stage performances, and in such a scenario, the continuance of series like Sankalp is even more heartening. Vidha Lal has chosen very talented young Kathak dancers, disciples of various gurus and styles from all across the country, whom I would never even have heard of had performances not been forced to go online. Vidha stressed on the fact that it’s young gurus who need appreciation and encouragement while they are training younger dancers.

In this episode, the 17th, Vidha presented Rahul Sharma, a disciple of Kumar Sharma. Rahul has been assisting his guru in Kathak-fusion choreographies for reality TV for some years now. His guru, Kumar Sharma, has gained popularity as a Kathak-fusion dancer and choreographer on TV shows and acknowledged that they have to work doubly hard to ensure their shuddh Kathak is impressive when chosen by someone of the stature of Vidha. Like his guru, Rahul also displayed great physical fitness, stamina and a strong sense of showmanship. If the guru is so fit, he would expect his disciples to follow a fitness regime as well. Here, the point I would like to highlight is that even in classical dances, dancers should think of fitness. Secondly, to encourage the younger generation to explore the classical arts and to attract them, it is necessary that classical arts gurus encourage their disciples to examine both the past and the present, or the classical and the contemporary. This is perhaps one way that young people can eventually build a connection with the shuddh classical arts. 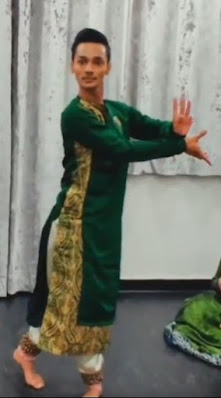 The first composition that Rahul chose was ‘Angikam’, an ode to Lord Shiva. Rahul started with very crisp nritta and chakkars. His movements were all very sharp as he held the stances for Ganga, bhujang, jata and trishul. The stances were held with great balance and ease. 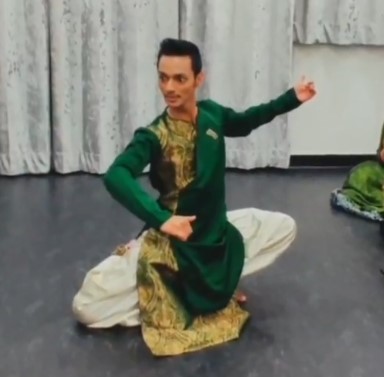 The second portion was the nritta or technical portion in which he presented footwork, a thaat with nritta, a padhant which had a kind of echo in it, a paran aamad, and a ghudsavaari paran with leaps and chakkars where he showcased the movement of a horse. He executed the movements very gracefully.

The final piece was a bhava piece, a thumri in teen taal, ‘Roko na dagar mero Shyam’. His guru was on vocals and harmonium and the singing was very melodious. Rahul started with a ghunghat gat, going on to show the Brajbala as going to the river Yamuna to fetch water. She lifts her matki on her head, plays in the water for a while and carries her pot full of water. Then, in the gat bhava, he danced as Krishna, who throws a kankar at her matki, which breaks to pieces and drenches her. She wrings her clothes dry and Krishna blocks her way, showing the bhava of chhed-chhad. Then the sakhi and Krishna play aankh-micholi. Kanha looks for her and when he finds her, embraces her as she begs to be released. 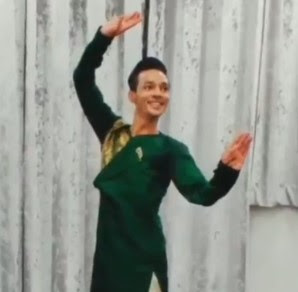 Rahul moved on to the culmination of his performance in drut laya. He did uthaan and then a chakkardar tukda with 16 chakkars in fast pace. It was very impressive how he danced technical Kathak like a seasoned athlete and when it came to the bhava paksh, he had an equally good hold on the abhinaya, the emotions and the actions. Along with his precision, in the technical portions, he showed great pace and energy. You can watch his performance here: https://www.facebook.com/watch/live/?v=860987617970017&ref=search