In her online performance series Sankalp: The Journey Shall Continue, Kathak dancer and teacher Vidha Lal has presented some gems of young dancers. Vidha also offers insight or commentary into some aspect of dance in her introduction, and for this eleventh episode, it was about the requirements of a good dancer as outlined in the Abhinaya Darpan. I am presenting my impressions of the Sankalp performances at Vidha’s invitation.

In this episode, the dancer featured was Tamanna Tiku, a trained Hindustani classical vocalist and a professional architect. She has been trained in Kathak under the tutelage of Guru Alaknanda. Her guru described her as a dreamer who is taking her guru’s tutelage further.

She began her performance with the shlokam Angikam bhuvanam, an ode to Lord Shiva, taking stances for the lord. Her last stance of Shivam, with the left leg lift, was impressive. The track to which she danced had been sung by her.

Her paramparik Kathak nritta was based on Raag Bageshwari, teen taal. The background was uncluttered and aesthetic, and her movements were very clear. She started with a tukda, thaat aamad, taking stances with grace, with very gentle hand movements or hastas. She performed a natvari and each time she came to the sam, it was in great style. The other compositions were tez aamad with chakkars, tihais and tukdas. The footwork was not always visible but Tamanna compensated with her impressive presentation and style. There was both grace and speed in her movements, but the striking feature of her dance was her total control of her movements and momentum. The movements seemed delicate even when they were dizzyingly fast. This was a performance where you thought you would blink an eye and miss something. 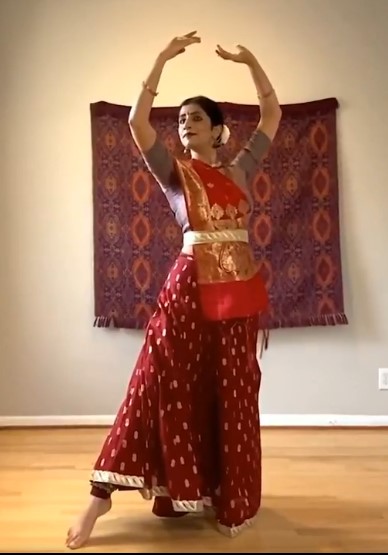 Next she performed Madhurashtakam. The abhinaya was impressive, depicting the various leelas and attributes of Lord Krishna. She depicted makhan chori leela, kaliya daman,geeta updesh  and many other episodes. Besides agility and pace, there was again total control and precision in her movements with no compromise on grace.

The final piece was a tarana in Raag Rageshwari, which had been taught to the students of AIPA during the lockdown by Guru Shovana Narayan. The parmelu and gat chaal were executed well. Even the vocals and the musicians for this one have to be applauded.

Tamanna’s dancing was among the most assured and mature I have seen so far. Her confident enjoyment of her dance made it seem effortless and graceful, yet every movement was fast, powerful and complete. ‘Total control’ is the phrase that comes to mind again. You can watch the performance here: https://www.facebook.com/VidhaLalKathak/videos/2681881695385296/