Like the arts, the festive spirit is subdued this year, but enthusiasts are keeping them alive through new platforms, using technology to reach out to others. Vidha Lal’s Sankalp: The Journey Shall Continue is an admirable effort of that sort which has not only introduced me to a mind-boggling number of young Kathak dancers I hadn’t otherwise watched, but has also kept their professional prospects alive through exposure and remuneration. I am writing my impressions of the Sankalp performances at Vidha’s invitation.

Since the twelfth episode of Sankalp was broadcast during the Navaratri, Vidha began with a prayer to the goddess. The dancer featured was Shubham Tiwari, who belongs to the Lucknow gharana of Kathak and is a disciple of Pt. Anuj Mishra, who has prestigious awards to his credit. Anuj Mishra emphasized the importance of supporting not only young dancers but also young gurus to fuel their motivation.
Shubham holds the Guinness World Record for performing 130 chakkars in one minute. The first piece that Shubham presented was an ode to Lord Shiva. Here was a dancer who, right from the beginning, standing with one foot behind the other, stood ramrod straight. His stances for Shiva were almost robotic (in a good way): totally straight, perfectly balanced and held for impressive lengths of time. The ease with which he did it was appreciable. He took the stances for Shiva and Devi holding the postures for damru, trishul, ananda tandav. The shloka that he danced to was ‘Karpoor Gauram Karunavataram’. 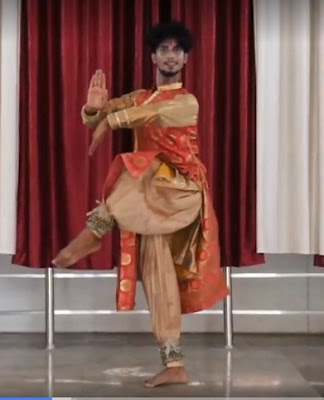 For the technical portion, he danced to 15 beats pancham savaari, and did paran, parmelu, tihai, ganesh paran, chakkars and ladi footwork. His footwork was powerful, precise and fast, and his arm movements were incisive, like slices of a knife: short, sharp, fast and ending on a flourish. His entire presentation spoke to his rigorous riyaaz, tayyari, stamina and commitment. The only area that I hope Shubham continues to work on is his bhava, which I hope will soon be at the same level as his prowess in the technical part of the form.

You can watch Shubham’s performance here: https://www.facebook.com/watch/live/?v=697987754434123&ref=search. You can also support these artists by getting in touch with Vidha and contributing.