In the latest episode of her Kathak series for young performers, Sankalp, Vidha Lal presented Nikita Patwardhan Joshi. Kathak dancer and teacher Vidha has started this online series with the objective of giving younger Kathak performers a platform and a remuneration from their art during the lockdown. I have enjoyed discovering these performers, from all parts of the country, so much that I look forward to the day when I will be able to see any or all of them live, in person, on a physical stage again. I present my impressions of the Sankalp performances at Vidha’s invitation.

On 6 September, Nikita was introduced in the Sankalp series by her guru, Dr. Tina Tambe. Nikita has also been trained in Bharatanatyam and folk dance.

The first piece she presented was a Shiva stuti, ‘Angikam’, depicting the attributes of Shiva through various gestures and stances – damru, Ganga, trishul, jata – interspersed with nritta, ending in balancing stances for nataraja and damru, and finally, holding the trishul. The stances, the leg lifts and balancing were all very neatly rendered, with very complete movements. Vocals and harmonium were by Omkar Patil, tabla by Prasad Padhye, sitar by Alka Gujar and choreography by Suchitra Harmalkar.

For the second piece, the pure nritta section was done in teen taal, solah matra. She did thaat, aamad, paran, tode, tukde, uthaan, chalan, chakkardar paran, tihai and ladi. The stances taken in the thaat were very graceful and in a very understated style, she did very crisp movements and foot slides. Each movement was very complete, and the feet and hands came out very neat and crisp. You could see the footwork very clearly and the chakkars were very well-paced, not too fast. All the hand movements were very well-finished. This was the section where she exhibited her proficiency and her mastery over technique.

The final piece she did was bhaav to a thumri by Bindadin Maharaj, ‘Sab ban-than aayi Radha pyari re’ in raag Hamir, taal ada. Radha dresses up and goes to the panghat. The sakhis praise her beauty, applying kala teeka to her. Nikita depicting her beauty, comparing it to the moon, portraying her hair ornaments, her moti mang, her other ornaments. I especially liked the gat she used to show her chaal. Again, a very gracefully choreographed and presented piece. 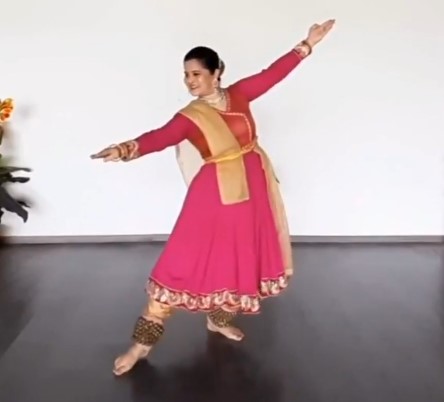 Nikita’s performance was marked by very well-finished, complete movements that were economical but seamless. This economy, thehrav and precision in her movements could be seen even in the faster-paced sections. I only wished that the camera could zoom in a little to show her expressions in the bhaav. Young dancers with such well-honed skills and such solid tayyari certainly have a bright future.