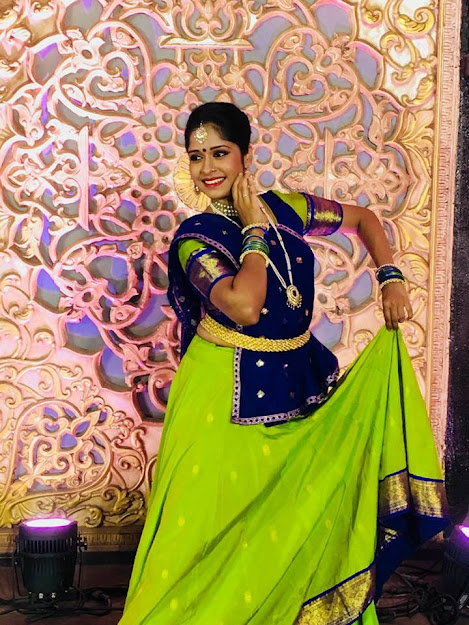 Kathak dancer and teacher Vidha Lal’s Sankalp series of online performances is now over a month old and I have enjoyed discovering the young Kathak performers she has selected. Along with Vidha’s very eloquent and warm introduction, it is also the quality of the video in these performances, which is clear and uninterrupted, that makes them a pleasure to watch.

In the last episode, the featured dancer was Mumbai’s Disha Desai, the daughter and disciple of Rupali Desai and the disciple of Mukundraj Deo. I am writing my impressions of the Sankalp performances at Vidha’s invitation. In the introduction, her gurus said that she is adept at choreography, very hard-working and dedicated. In fact, her mother compared her to Abhimanyu, since her exposure to dance and acting started while she was in her mother’s womb. Disha started learning Kathak at the tender age of 2 and a half. She has worked hard on her tayyari and ang shuddhi. Disha is a multi-talented performer since she has her father’s acting talent, besides being trained in vocals too.

Disha’s performance was so crisp that involuntarily one uttered ‘kya baat hai’ at the screen, even though the performer was distant. The stage and background were perfect: Disha performed on an auditorium stage with the attendant lighting and good videography. Having Ganapati ji on the stage was appropriate since these are the days of Ganeshotsav. She started with the Ganesh vandana, ‘Gaiye Ganapati jag vandan’. After offering a pushpanjali, she went on depict the elephant ears and vakratund in graceful movements. I was especially delighted by her movement showing Ganapati ji lifting a laddoo with his trunk and taking it around to push it in his mouth. The big abdomen of the lord was depicted – lambodaraye – and through jumps, she depicted the mooshak vahan. The nritta was interspersed very well, reaching a crescendo at ‘Om namami Ganapati’. The hands and footwork were flawless, completing every movement. She ended the piece with the Ganesh paran.

Next, she presented teen taal, solah matra. She exhibited her tayyari in uthan, paran, thaat, tode, tukde. Her technique was very crisp, and she also presented a few chakkardar pieces. As her hands and feet moved in fast pace, I wished I could see her footwork as the camera could not capture it.  It was as if, in an auditorium, you keep craning your neck to see the footwork.

Finally, she presented a thumri, ‘Mohe chhedo na’. This thumri brought out another talent in her, that of being an actor. She expressed a lot through her eyes and face and in the gat bhaav, she captured the expressions of both the sakhi and Krishna, who is teasing her. What she depicted was the sakhi going to the panghat to fetch water and Krishna, who meets her on the way, embraces her, troubles her by climbing on a tree and lifting her matka, blowing dust into her eyes. She keeps getting annoyed with him and keeps admonishing him. As she goes to draw water from the well, Krishna throws a pebble at her matki and breaks it, drenching her with water. Finally, Disha depicted the Holi leela. The soaked sakhi smiles and shies away as Krishna does chhed-chhad with her. The entire performance was a feast to watch, with very well-rehearsed technique and bhava which conveyed a lot through the dance. I suppose this Abhimanyu knows better since her mother is her guru and could not afford to doze off!