In the first performance of her online performance series for young dancers, Sankalp, Kathak exponent Vidha Lal presented Rituparna Mukherjee, a disciple of Alaknanda. This performance was broadcast on August 2 and was introduced by Rituparna’s guru, Alaknanda, also a co-sponsor of the performance series. I am going to be writing my reports/impressions of the Sankalp performances at Vidha’s invitation.
Her guru stated that Rituparna’s forte is abhinaya and choreography. The first piece Rituparna presented was the ‘Dhyana Shloka’, an invocation of Lord Shiva, choreographed by her guru. With stances and gestures, the young Rituparna depicted the attributes of Shiva, showing the chandra and Ganga emerging from his jata. The piece was presented with grace and precision.
In the second piece, the nritta section was in raag Bageshri, teen taal, presenting a few uthaans, parans, tez aamad and tihais. The footwork was neat and the presentation was accurate, indicating strong taiyyari.
The third piece was a Hori in Mishra Pilu, ‘Main To Khelungi Un Sang Hori’. Rituparna started by depicting the gopi donning her ornaments and doing a ghunghat ki gat. The gopi then looks around and asks if anyone has seen Krishna. The fun and frolic of Holi, with gulal and pichkari, was shown; chhed-chhad and marg rokna added to the fun. Finally, she applies colour on Krishna’s forehead and on his feet too, taking his charan dhuli. The abhinaya was good, emotively presented, specially the last bit which was done with a coy smile.
Finally, she presented a tarana based on raag Malkonse and teen taal, choreographed by her guru. Depicting flowers, bhavra and mridanga, the tukdas and tihais were presented well, with polished, complete movements. You can watch her recital here:
https://www.youtube.com/watch?v=bwdWgbyh-UI 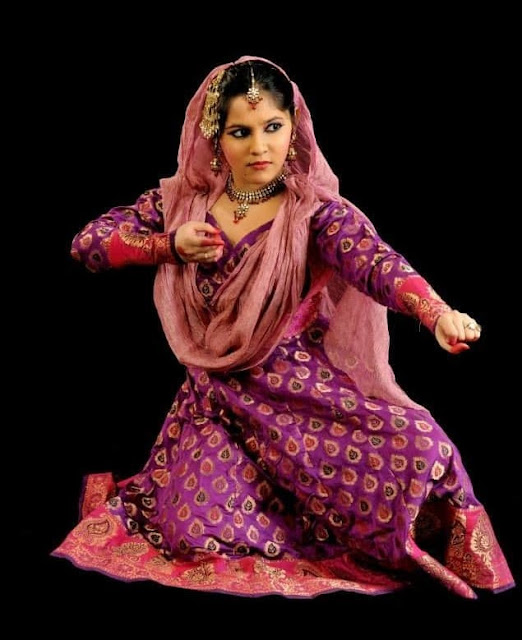 Rituparna is a pleasant, graceful and sincere performer but perhaps could do with a little more work in the area of vigour and energy. One impressive aspect of her recital was that she performed as if for a full auditorium, engaging an imaginary audience from left to right and back, indicating that for her, the event was a formal, serious one and not informal just because it was ‘work from home’. Also, because the platform is new, it could do with some improvement of background and music volume etc., but that has its limitations, naturally, and will happen in due course.
Email Post