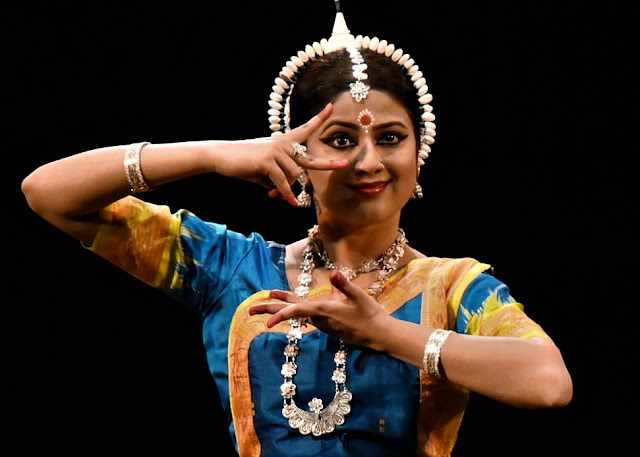 Arunima Ghosh gave an Odissi dance presentation called ‘Sakha’ at the IHC in Delhi earlier this year. Lord Jagannath was seated on the stage. Arunima presented the performance with the blessings of her guru Sharon Lowen. The invitation for the performance had some beautiful pictures of Arunima by her husband Sanjit Debroy, which made it look very attractive. The production was based on various compositions on Lord Krishna. 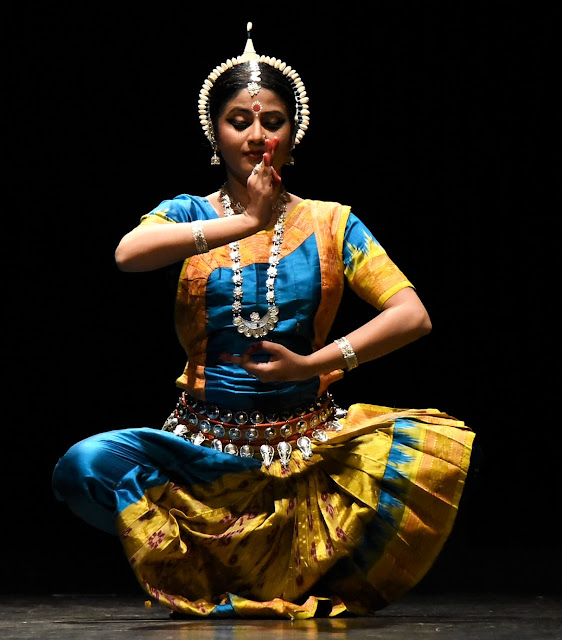 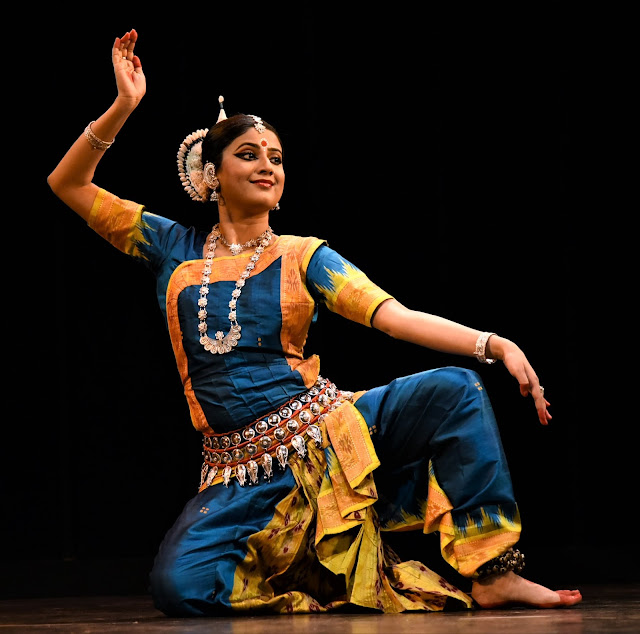 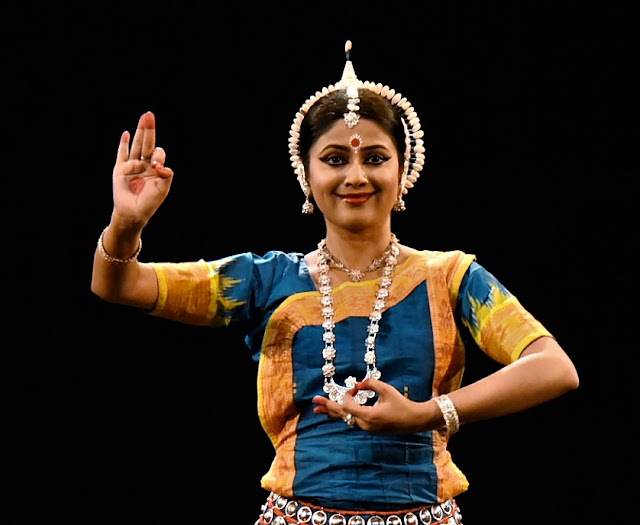 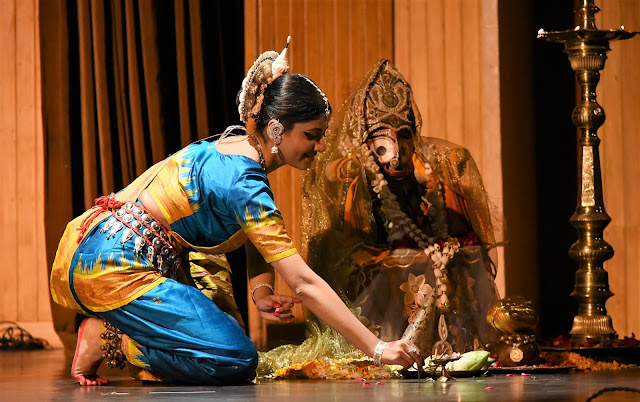 In an invocation of the lord in the beginning, Jagannath was addressed as the Balagopala. In ‘Jai Jagannath’, the eternal friend or sakha is Krishna, who appears as balagopala, as the passionate lover and as the remover of the fears of worldly existence. ‘Shri Jagannath ashtakam’, composed by Adishankaracharya, recited by Shri Chaitanya Mahaprabhu on his visit to the Jagannath temple, was chosen for the first piece, which had choreography by Arunima herself. Music composition was by Prafulla Mangaraj and Sukanta Nayak. Capturing the echoing sounds of the flute of Krishna, the performance began. Arunima wore a yellow and blue aharyam. She depicted the morpankha of the lord, aarti, dhoop, venu, Vrindavan, birds, and Lord Jagannath rocking in his rath or chariot, moving on a path that had been cleared, with offerings of flowers and chavar seva. 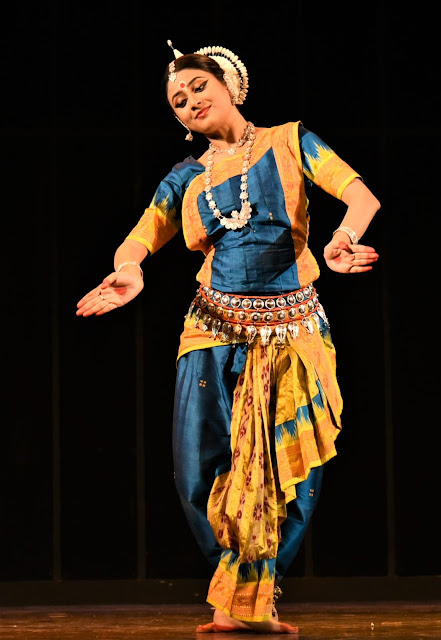 The second piece was on ‘Madhurashtakam’, a composition of Shripad Vallabhacharya. Choreography was by Guru Sharon Lowen. The ashtakam describes the attributes of Lord Krishna. Everything associated with him is madhur or sweet to the ears, heart and mind. Arunima depicted all that is madhur about him - his venu, morpankha, his leela, his eyes, lips, etc. His leelas of Kaliya daman, jhula etc. all are madhur. In fact, his resting on the cows, just as he rests on the shesh shaiyya, is also heart-warming. 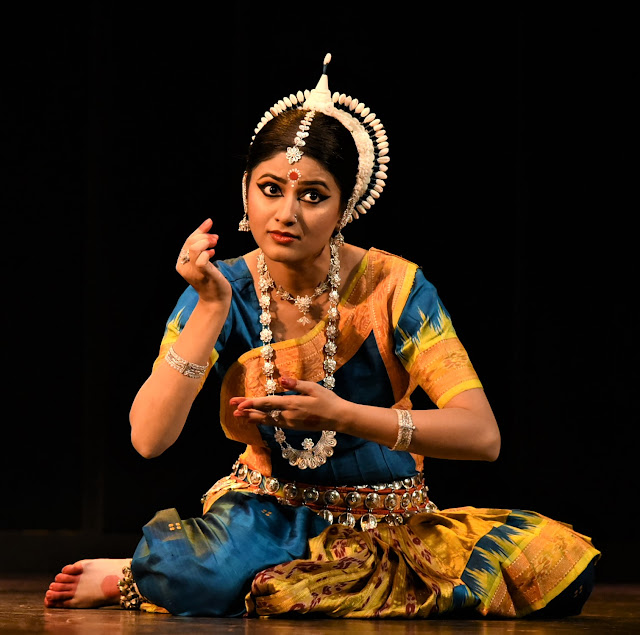 Then she elaborated on makhanchori, cheerharan, Holi, raas and playing with his gop friends, carrying a bamboo on his shoulders: all that wins the hearts of his devotees. She ended the piece with an offering of tilak and aarti to the lord. Her abhinaya for all these pieces was very subtle, bringing out the love and warmth that the lord’s devotees have for him. 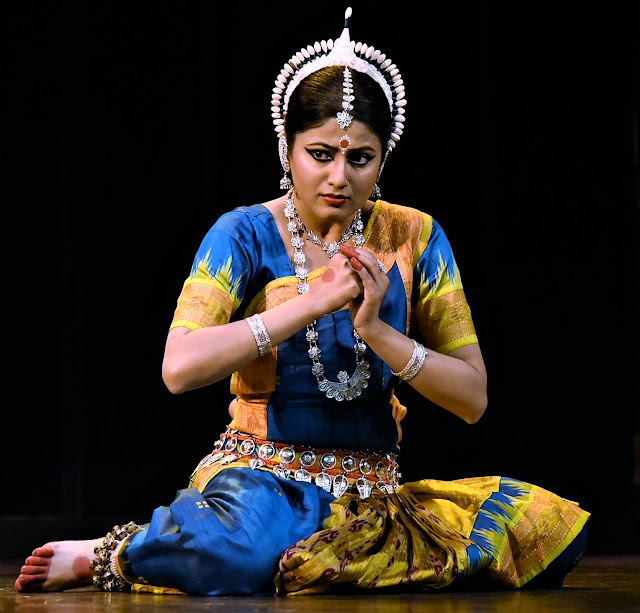 The third composition was a Meera bhajan, ‘Mhara olagiya’, in raag Bhairavi, ektali. Choreography was by Guru Sharon Lowen, inspired by Kumar Gandharva’s composition. The bhajan says that as the peacock is filled with joy on hearing the rumble of the thunderclouds, the devotee is overjoyed when he hears of his lord coming. 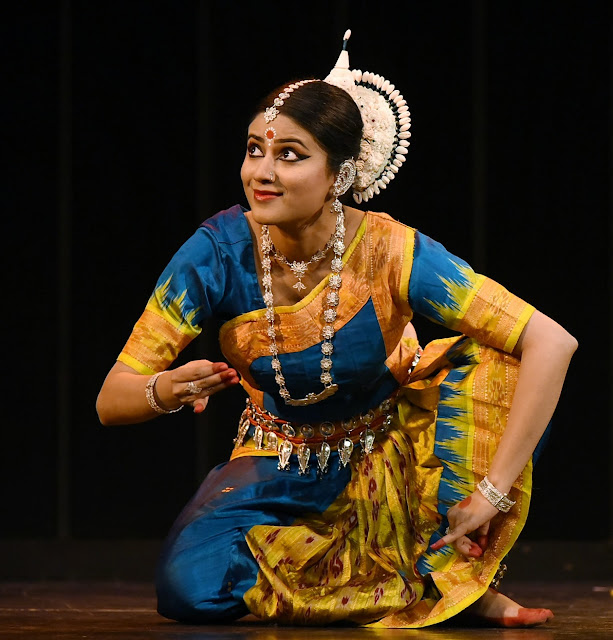 Just as the lilies bloom at the sight of the moon, so the sakhi is thrilled to have Krishna with her. The sakhi ties toran on her door and makes an alpana, lights the lamp, singing ‘hil-mil mangal gao ri’. ‘Mor magan bhaya’ – the expressions of the peacock were depicted. Kumudini, the flower, blossoms as it sees the moon. 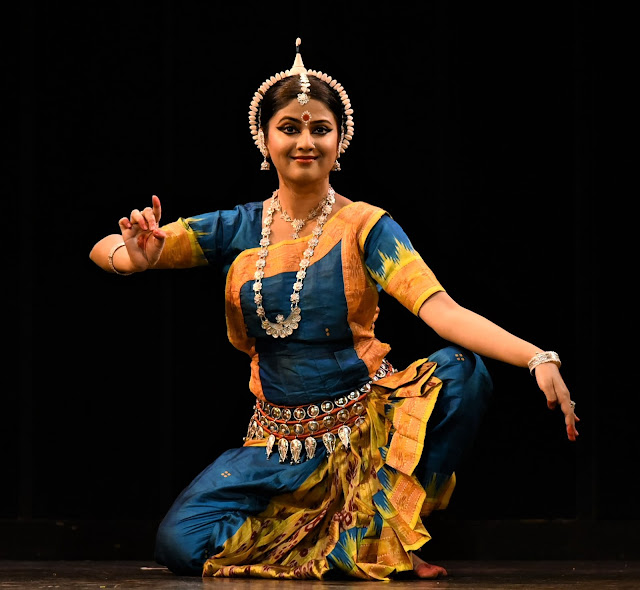 As her sakha, the lord, comes in, the nayika seats him, washes his feet, wipes them, and takes the charanamrit. Arunima briefly depicted the leelas that the lord has shown as a sakha, that of Draupadi cheerharan and the gajendra moksha, ending the piece in aarti and natmastak pranam. Arunima has developed a very lyrical style of abhinaya and movement in her form, which was evident here. 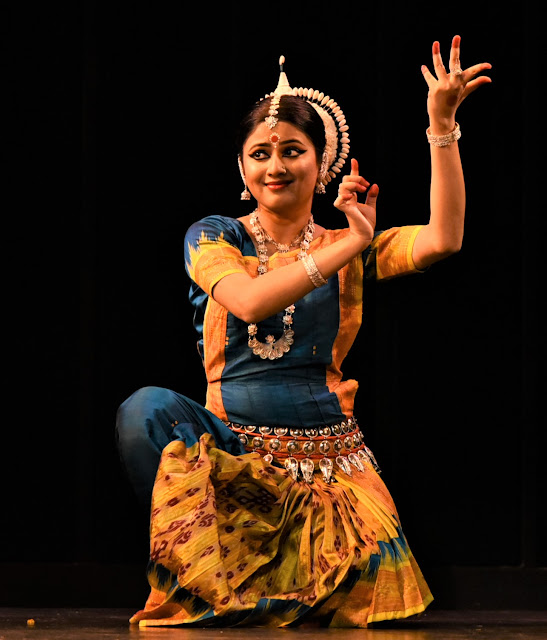 Following this was a Jayadeva ashtapadi, ‘Yahi Madhava’. Choreography was by Guru Kelucharan Mohapatra, music by Bhuvaneshwar Mishra. It started with the strains of the very melodious flute. Arunima depicted Radha standing at the door holding a deepak, waiting for Krishna with forlorn eyes. She has difficulty protecting her deepak from the wind outside, and each time she comes to the door and does not see him, she is further saddened. It is just before the dawn that she falls asleep. 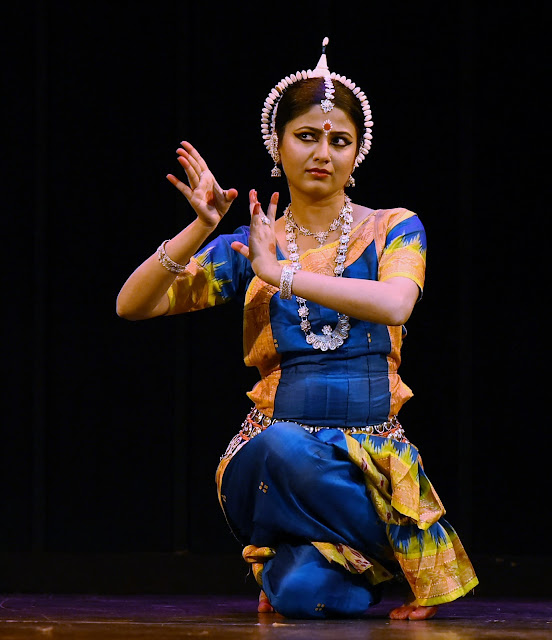 When the dawn breaks, the birds are chirping and Krishna comes knocking to her doorstep. He bears all the signs of a dalliance with another gopi the night gone by. His morpankha is crumpled, his clothes are dishevelled, he is sleepy from having stayed awake in the night, and his eyes drooping. 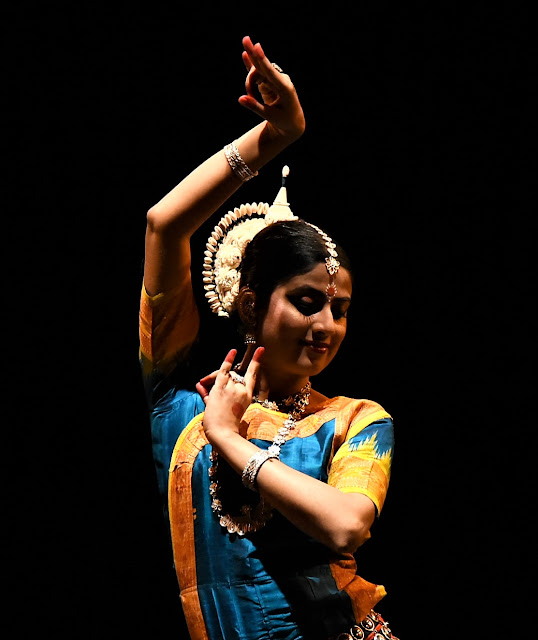 Arunima could capture just the right expression with droopy eyes to show the state of Krishna. Radha, annoyed at this, pulls her hand away. His lips are red and he wipes them and says that it was from eating berries in the woods. There are scratches on his body and his explanation is that they are from the thorns of the bushes. The flowers that Radha was wearing and had spread around have wilted and despondently, she removes them. She asks him to leave immediately. The vocals for the piece were very effective, bringing out the nuances of the khandita nayika. The abhinaya was commendable. 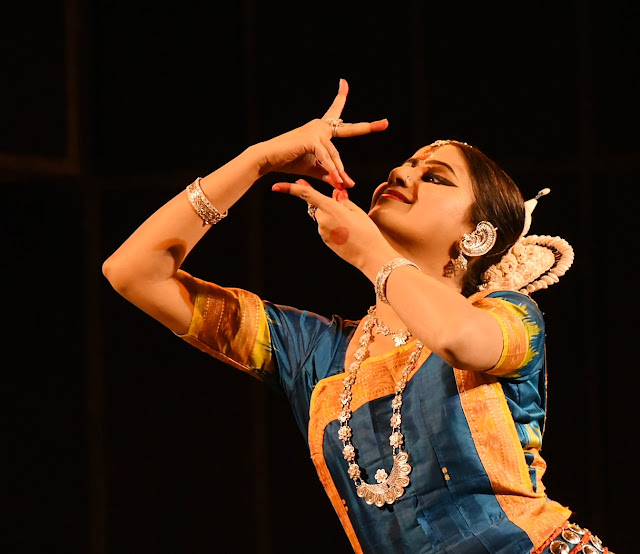 The final piece was ‘Moksha’. As per tradition, the dance is supposed to lead the dancer and the audience towards a spiritual and intellectual release or moksha, ending in a union with the lord. Choreography was by Guru Kelucharan Mohapatra. The rhythm of the mardala was exemplary. Arunima has a very gentle visage and style. Her hand movements, body, feet and swaying in tribhanga are all very gentle and graceful. There is a lot of precision in her technique and her abhinaya too does not fail on any count. She can emote very well on any mood of her piece

Arunima was accompanied that evening by Guru Prafulla Mangaraj on mardala, Sukant Nayak on vocal, Dhiraj Kumar Pandey on flute, Gopinath Swain on violin and Vishwanath Mangaraj on manjira. 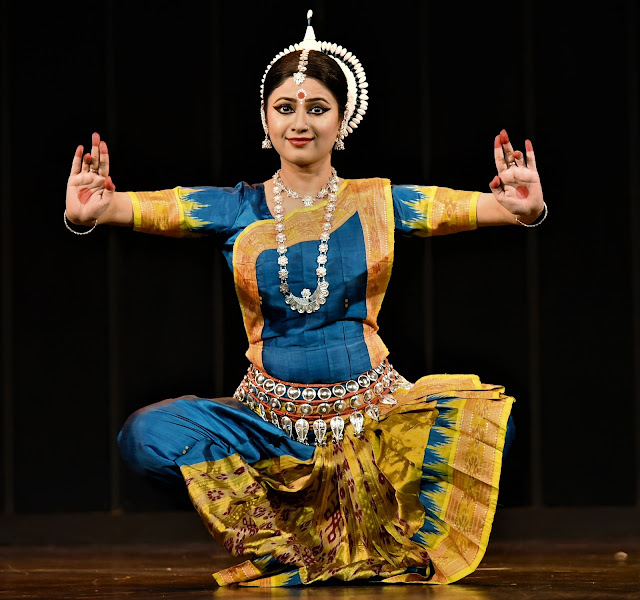