Abdul Khalid is a Kuchipudi and Bharatnatyam dancer, a disciple of gurus Raja-Radha and Kaushalya Reddy. I have written about his specialty, streevesham in the Kuchipudi style, as part of an interview I did with him once. Abdul is a dedicated and deeply committed dancer – it is easy to see, when you speak to him, that his passion for dance consumes him completely. But he is also clearly a careful and dedicated teacher, as his students show. 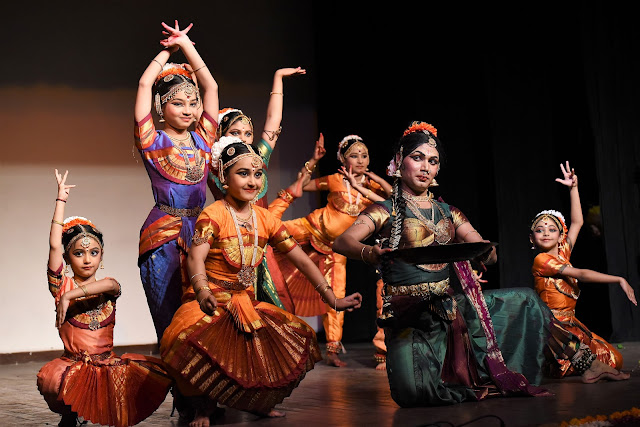 He and his young students at Natya Varna performed at the Muktdhara Auditorium in Delhi on 31 May this year. The chief guests for the performance were Ashish Mohan Khokhar, Alka Raghuvanshi and Sharon Lowen. 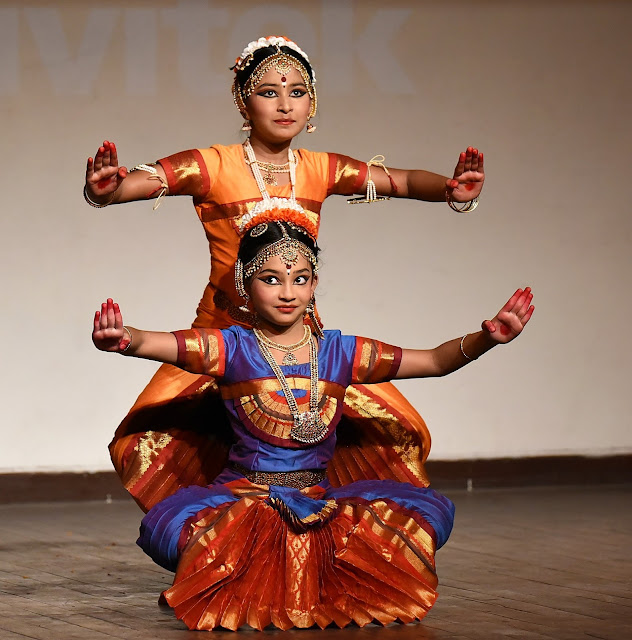 His very young students are turning out to be fine dancers. They are all being trained in the nuances of Bharatnatyam. The little girls costumed in their aharyam, attempting to make precise movements with their hands and feet, were worthy of applause. Abdul has obviously taken great pains to train them well. The pieces were all well-rehearsed, with footwork and stances. The closing formations were all praiseworthy. Compositions in the Pandanallur style were featured, starting with a ‘Ganesha kautuvum’. The youngest children performed this, taking stances to depict the elephant god. Some of them were only 5 or 6 years old, but they did not falter or forget in their recital. 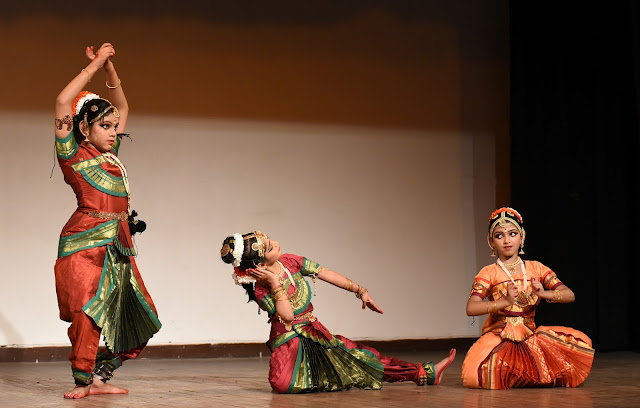 Next, they performed the ‘Natesh kautuvum’ in praise of Lord Nataraja in raag Hamsadhwani, taal adi. They took stances for Lord Shiva in a tisram alarippu in raag Madhvanti. The girls showed some refined shoulder moves and leaps. 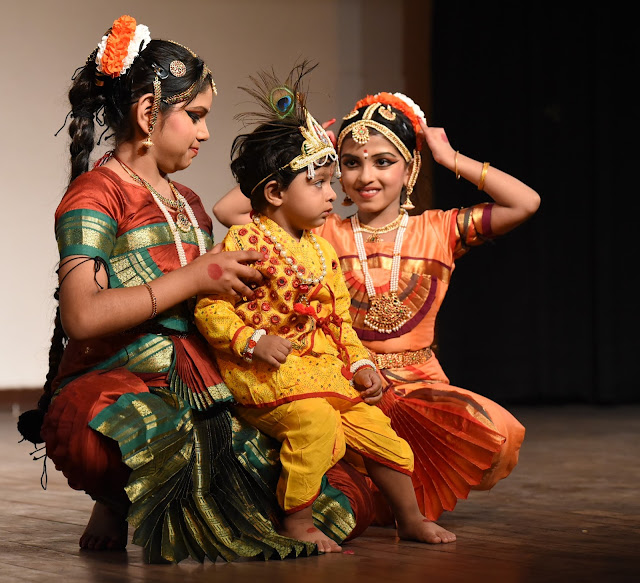 The next performance was ‘Gopal Neelaya’, a kirtanam in taal adi, raag Karnatdevagandhari. Here, mother Yashoda praises little Krishna’s beauty. Abdul had choreographed this and also written the starting Hindi lyrics. The little ones showed balance in their gestures, with their tiny hands, showing Govardhan, gokulvasi, girdhari and murlidhar, ending with the shloka ‘Shantakaram bhujagshayanam’ in praise of Lord Vishnu. The concluding formation and stances were well-rehearsed. 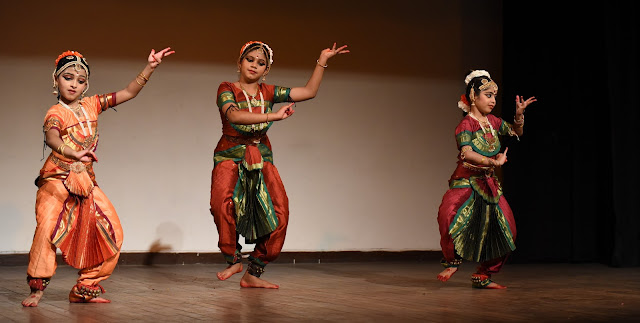 Finally,, the children presented a Darbari Kannada thillana, aditalam, composed by mahavidhvan Meenakshi Sundaram Pillai. For the dance, Abdul took inspiration from his idol, Yamini Krishnamurthi. The eye movements and balancing stances made the audience’s hearts go out to these kids. 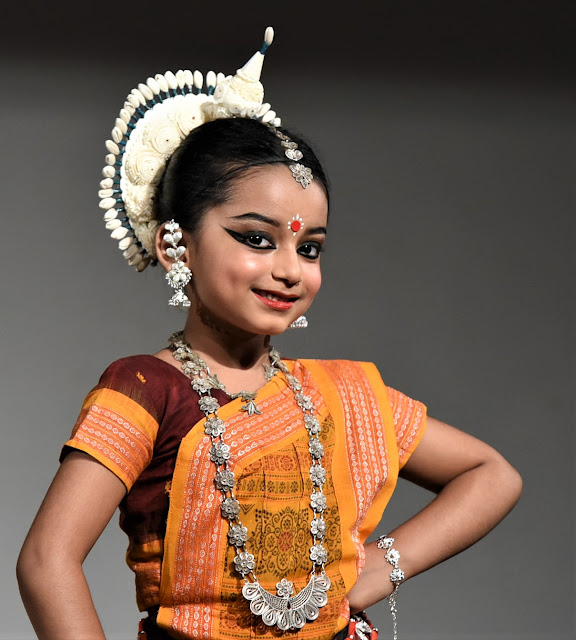 And then came the star performer for the evening. Six-year-old Srishti Debroy, daughter and disciple of Arunima Ghosh, is a prodigy. She presented a Basanta pallavi in Odissi in raag Basant, ektali. The pallavi was choreographed by Guru Kelucharan Mohapatra. The confidence of this child was remarkable. What left a mark was her smiling face, her precise chauka, her graceful tribhanga, very rhythmic footwork and hastas and eye movements that were very mature. The ease and precision with which she danced left the audience open-mouthed. Her footwork, leaps and rotations were all in very smooth movements. The audience was all applause for this little one, who has been gifted this talent by God.


Abdul Khalid himself performed streevesham in the latter half of the evening. This was done in the yakshagana style and he presented the most popular composition, Bhamakalapam
. 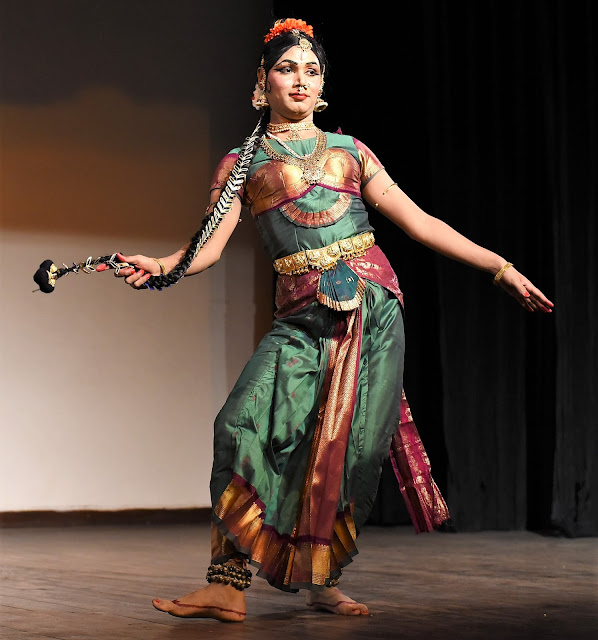 The first piece he performed was ‘Praveshdaravu’, where, through dialogue and dance, the character introduces itself. Satyabhama is a swadheenapatika nayika and her walk and attitude announce ‘Bhamane Satyabhamane’. Later, she describes her beauty, her lotus eyes, her lips like flowers and her veni, which was not only figurative – Abdul wore an actual long veni. 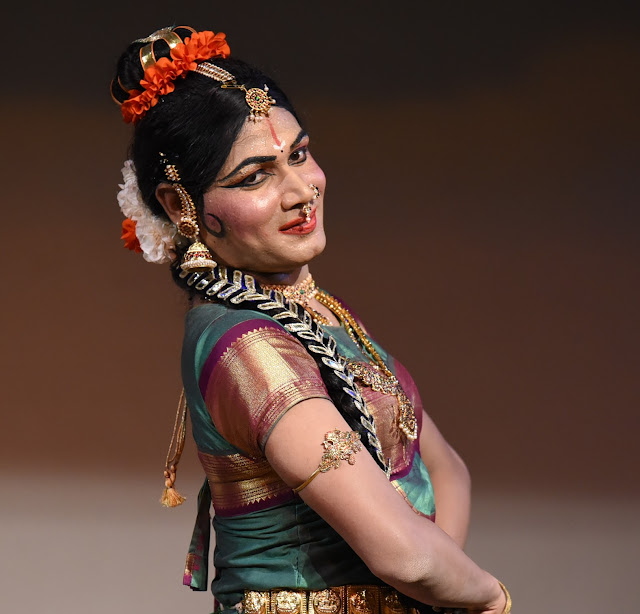 In the ‘Madanadaravu’, she pleads with Kamadeva to spare her his arrows. She is in agony as she waits for Krishna. The two pieces were enacted well by Abdul. His makeup and aharyam were appropriate for Satyabhama. 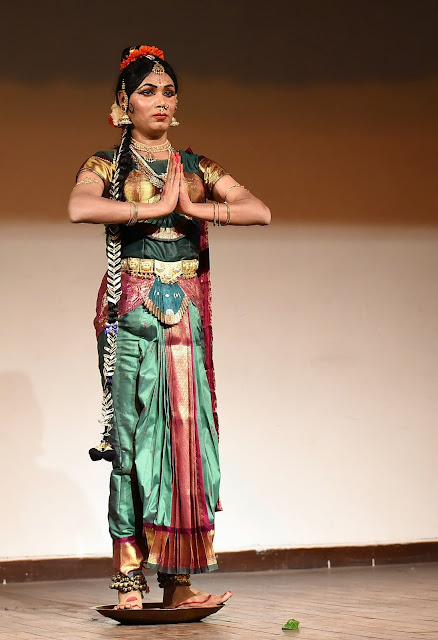 Next, he performed a tarangam on a brass plate, which needs such great concentration that it becomes a direct connect with the Almighty. The tarangam was in raag Malavi, aditalam. ‘Kanakamayimay nupur charana,’ said the literature. Abdul moved forward and backward on the plate, doing rotations in rhythm and taking stances depicting Krishna. Lastly, he and his students performed the mangalam.

The only point of advice to Abdul can be that it would be better for him to perform separately from his students. Since he combined his students’ performance and his own, he had to keep his guests waiting as he dressed up for the streevesham. And when he finally appeared on stage, he looked a little ruffled after running around for the students’ performance before his. I’d love to see Abdul perform any one of his chosen dance forms in a solo, when he can relax and focus on his own presentation.