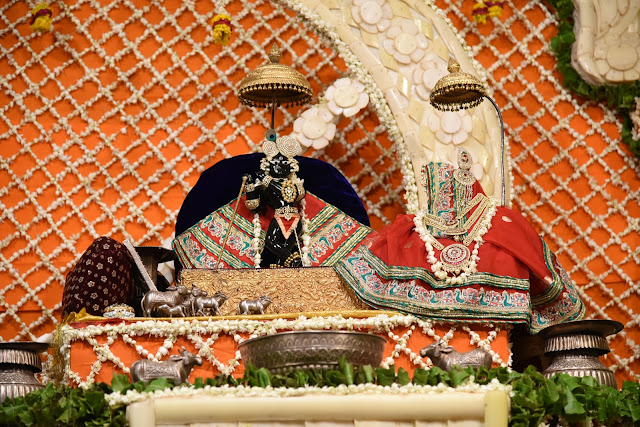 Before the seva, the kirtan by Vaishnavs in the temple, with the sounds of manjira and mridangam, created much fervour and bhakti. This is a dance of total surrender and the following ecstasy, which Geeta ji is also a part of. Since it was June, Thakur ji presided in a phoolbangla, which was very artistically carved out of the bark of the banana trunk into beautiful shapes. The banana trunk sculpture was further embellished with kilos of mogra, which filled the moist air with a heady fragrance. 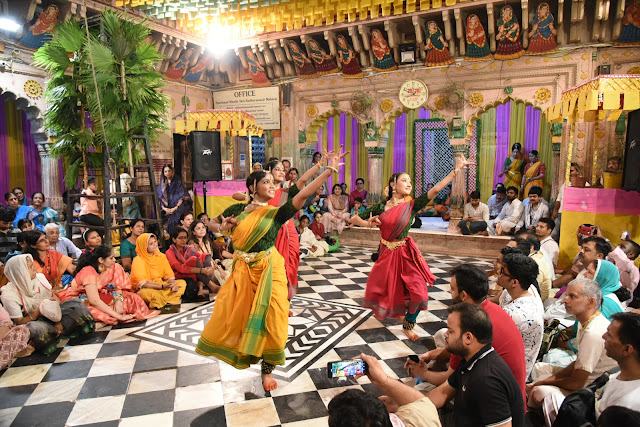 The first group of young dancers performed an alarippu and then a nritta piece. The girls exhibited very graceful movements of neck and eyes, and precision of hands and footwork, to the rhythmic pieces. 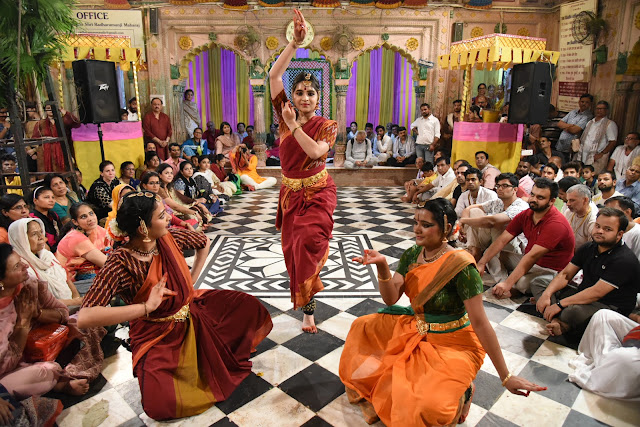 The third composition was ‘Sundar Shyam’, an ode to Krishna, depicting trees, vanamala, the leela of Kaliya daman, the kundal on Krishna’s ears, the beauty of his cheeks and describes him as a cowherd roaming the banks of the Yamuna, where lotuses bloom. His griva, chappalanayan, his flute were portrayed, and then one of the dancers danced the peacock dance while offering a morpankha to Krishna, who took a stance showing the bansuri in his hand and the morpankha in his crown, another dancer posing as a calf looking adoringly up at him. 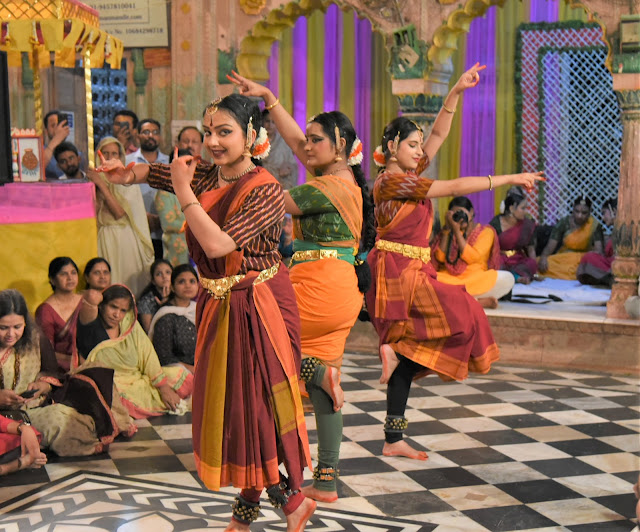 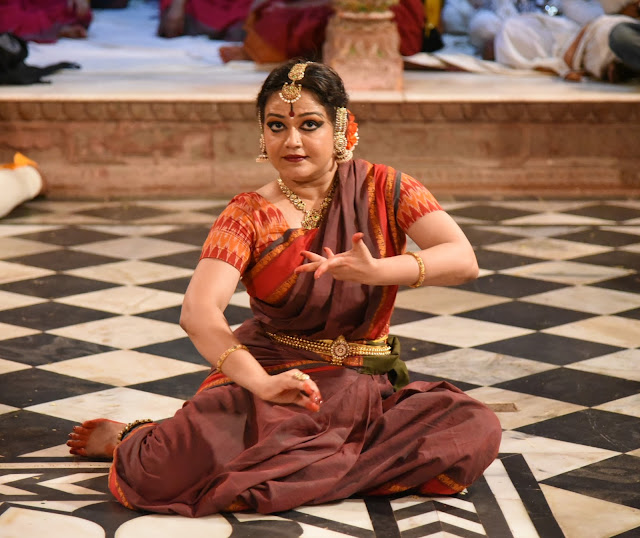 What followed next was a blissful experience that added to one’s perceptions of bhakti. The piece was set to the Meera bhajan ‘Mane Chakar Rakho Ji’. The dancer, Bindu Sharma, dancing solo, showed a flowering bagh where she collects flowers and strings them for the lord. As she comes out to look for her lotus-eyed Lord Krishna, she finds him standing nearby. In a seated position, she depicted how the lotus of her heart fluttered and flowered and then lay at his feet. The lord himself blooms like a lotus and she embraces him. The abhinaya and the expressions for this piece were very moving. 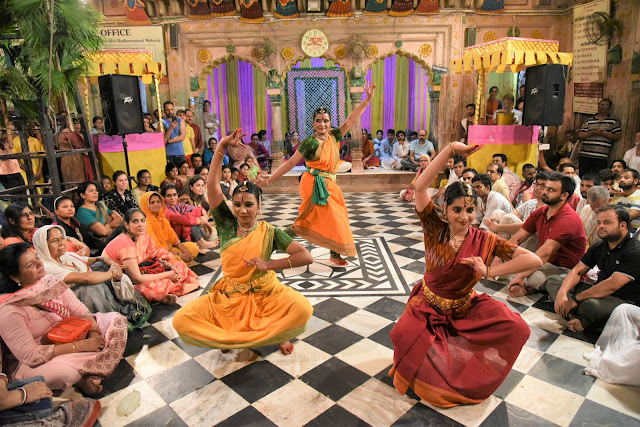 In the next piece, the dancers performed fast-paced nritta depicting Lord Shiva with damru, his blue throat, panchabhut, agni in one hand, trinetra, snakes, Nandi, Chandra and Ganga. They did expansive movements with turns and leaps. Finally, it was the thillana, very well-choreographed and coordinated. The very precise movements spoke for the effort and rehearsals that had gone into the performance, which ended with the murali madhuri. 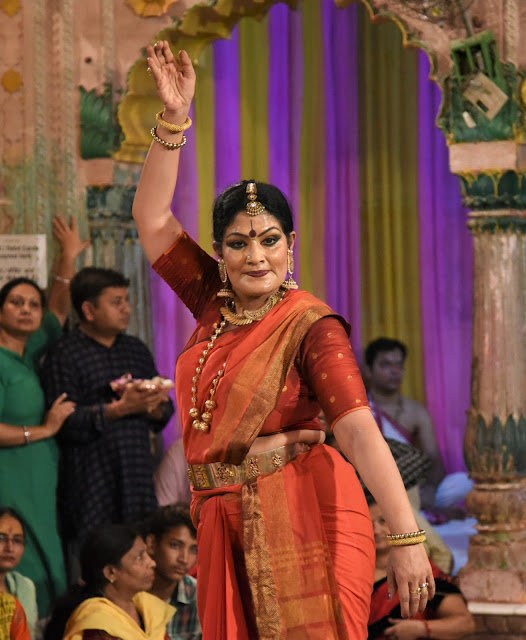 On the evening of the second day, it was aarti as usual followed by the naam sankirtan, but that day, there was a large crowd of devotees at the temple. And yet, when the performance began, for me, it all just faded away. That day, I could not even get hold of my notebook or my recorder, so I totally soaked in the performance. The notes of the flute by G. Raghuraman floated in the temple and then it was the voice of Sudha Raghuraman that sang ‘Baso More Nainan Mein Nandalal’ in the most melodious, honeyed notes. 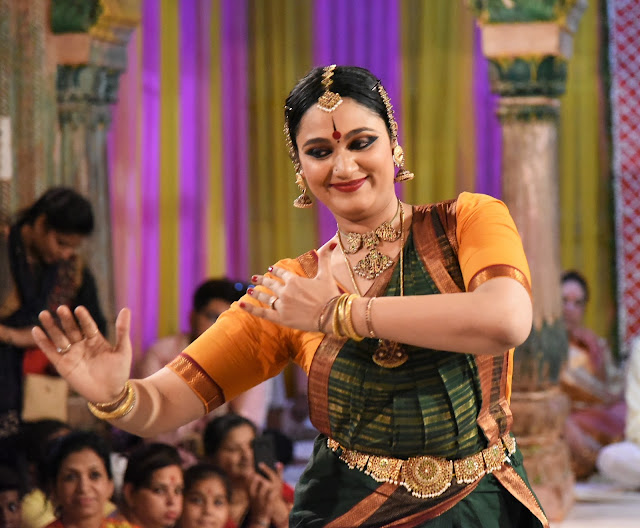 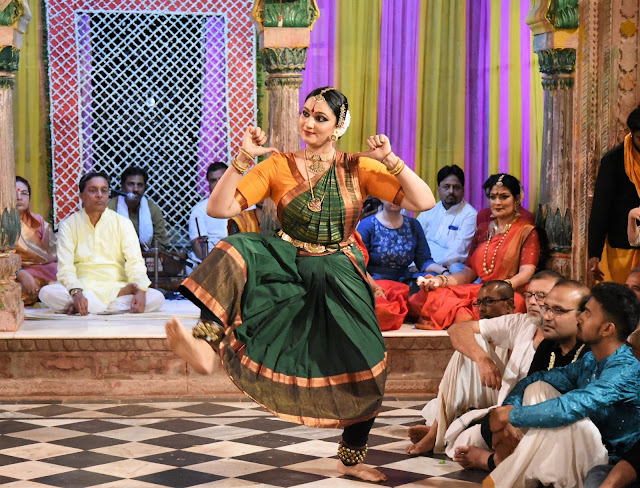 As Sharanya started dancing, she covered the entire length of the courtyard in just three leaps. Sharanya portrayed Krishna with his cows as the cowherd Gopal, the one who lifted the Govardhan parvat on the little finger of his left hand. 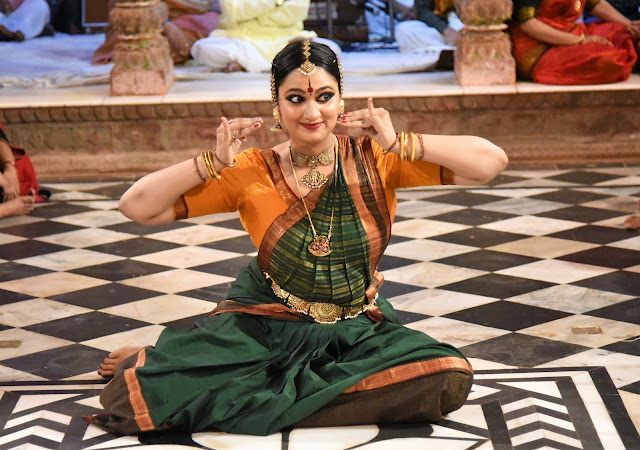 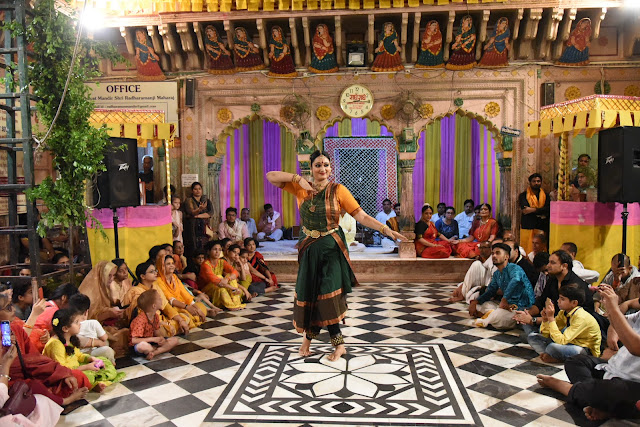 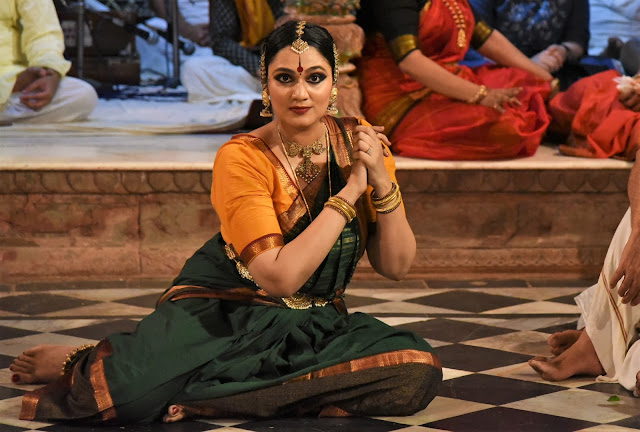 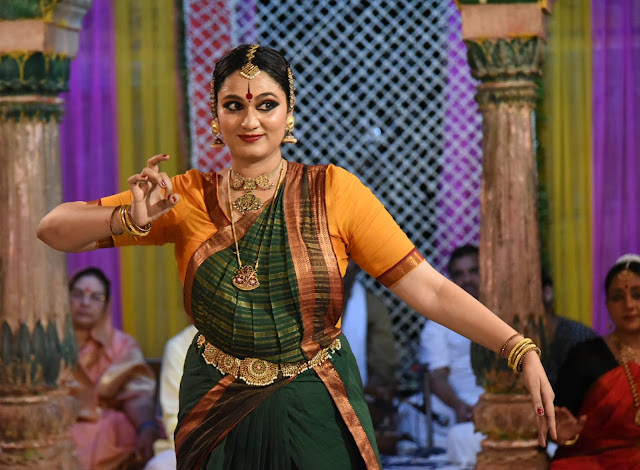 The bhakta beseeches him to reside in his eyes. Her interpretation of arunatilak, where the abha of the tilak is so brilliant that the bhakta is bedazzled by it, made a memorable moment. Shudraghantika, the little trinkets on his waist and his feet, are what the bhakta follows along with the pitter-patter of the little feet of Krishna as he follows him. A performance that truly made a mark on the heart. 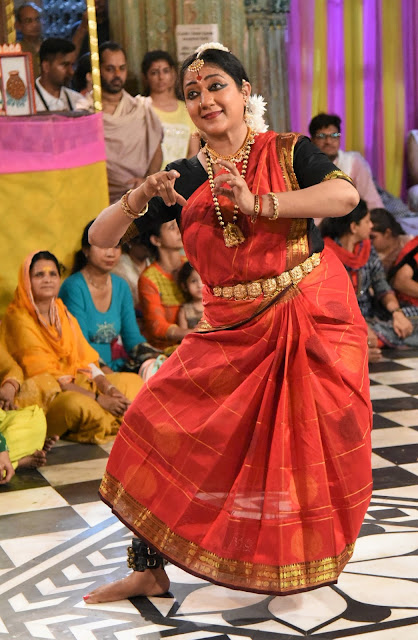 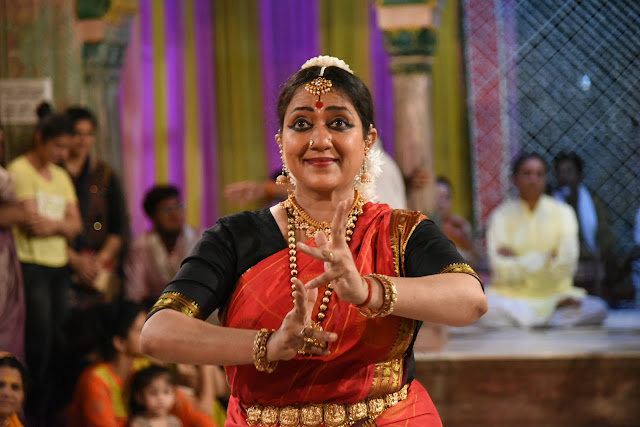 Priya Murali performed a solo next, narrating the story of Krishna and his friend Sudama. 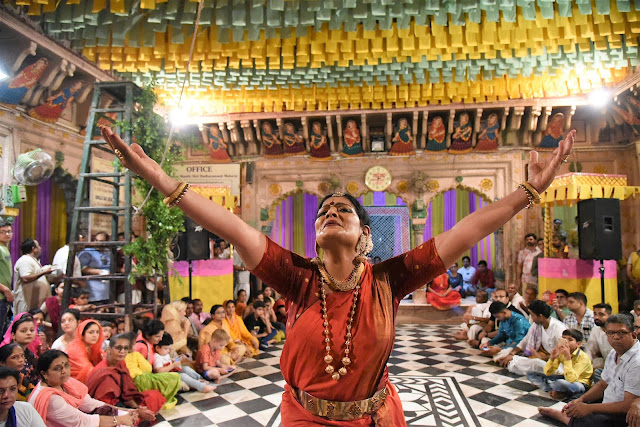 Geeta Chandran was the next to enter the courtyard with her solo, which I think no words are adequate to describe. Since the dance was a direct connect with the almighty, there was no stage, just the temple floor. And Thakur ji, in Mahavan Leela, was seated on a crescent moon in a phoolbangla. There was no dancer, just a bhakta. And no audience, but He Himself. It was a moment of epiphany. 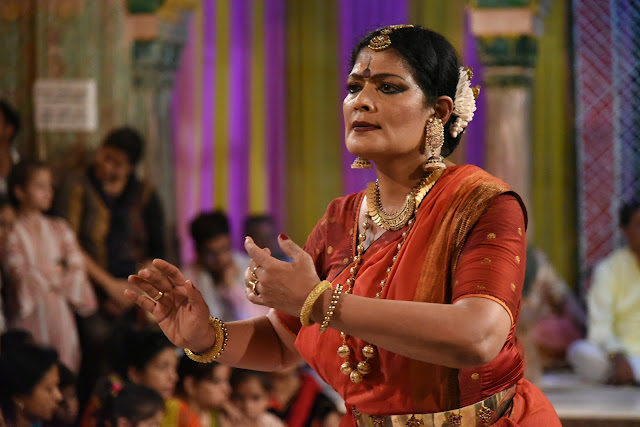 Geeta ji interpreted ‘Krishna Ne Begane Baro’ in three different ways, in three different bhavas. In the first, mother Yashoda comes looking for little Krishna when she sees the calves back at the time of godhuli, but not the little cowherd. She looks for him everywhere, asking around, and when she doesn’t find him, her heart sinks and she pleads with wet eyes, Krishna, ne begane baro. Then she spots the morpankha where Krishna is hiding from her. The mother and child embrace each other. 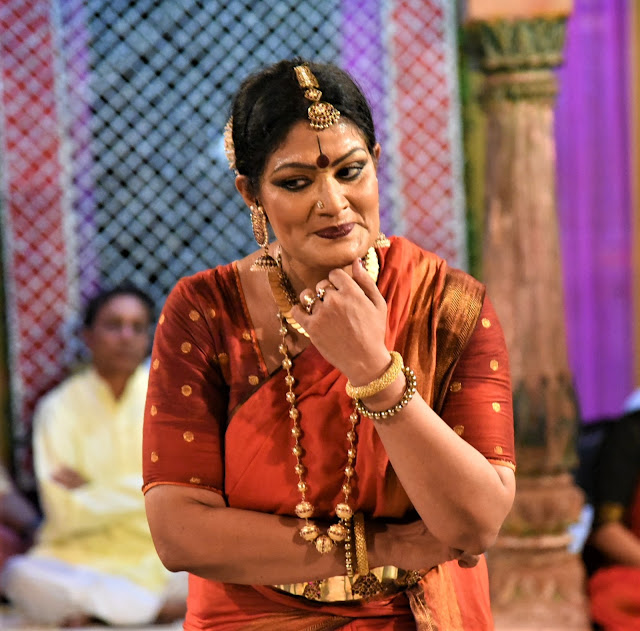 And then it is Radha who has dressed her chambers for her beloved and waits for him. And as she calls out, Krishna, ne begane baro, Krishna appears and the two indulge in an embrace and nikunj vihar. 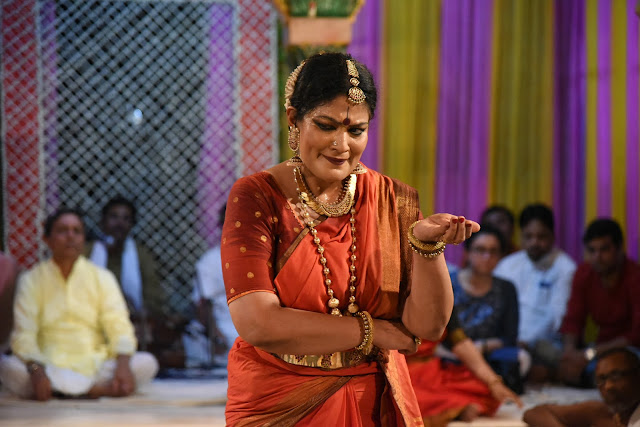 Finally, the call comes from a seeker, a bhakta in viraha, who has spent a lifetime in this material world and finds himself drowning in the bhavasagar. He finally makes one desperate call, Krishna, ne begane baro. And as Geeta ji totally immersed herself in bhakti bhava, with tears rolling down her cheeks and her body trembling, she called out to the Lord, and at that exact moment, the curtains of the sanctum were drawn and Thakur ji appeared for darshan. It was a moment of goosebumps and a lump in the throat. 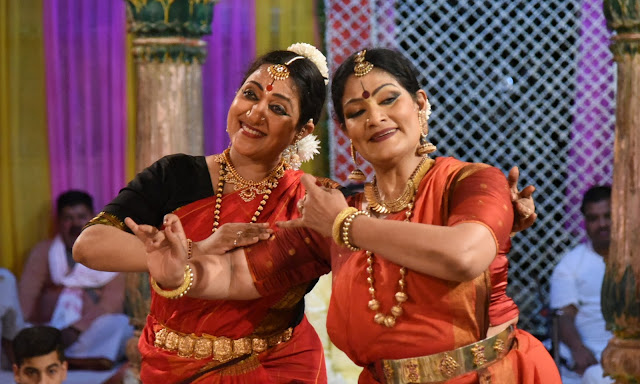 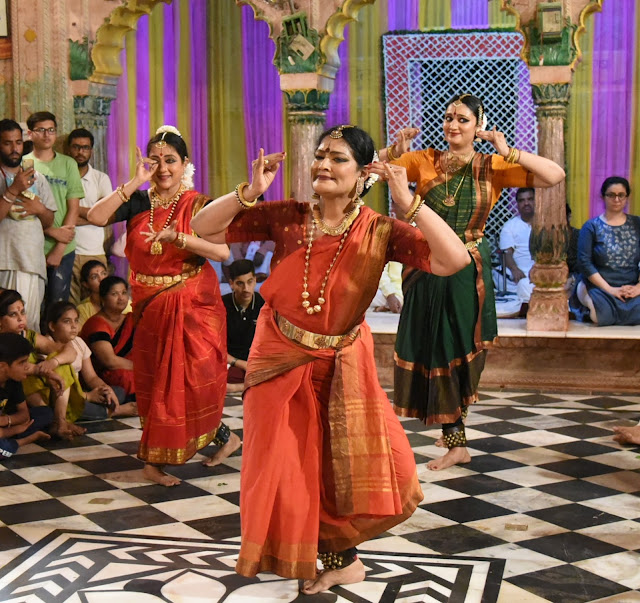 The celebratory, rousing kirtan of ‘Vanamali Vasudeva’ by the three dancers in ecstasy, with moves depicting various instruments, was a joyous dance that acted as a balm for the moment of viraha.

If I may say so, this is not a report or a review, just a recounting of an unparalleled experience.