‘Odissi on High’ was presented in May in Delhi by Shri Ram Bharatiya Kala Kendra. The production featured dancers of Sutra Foundation of Kuala Lumpur and Rudrakshya Foundation of Bhubaneswar. The programme was co-created by Sutra’s Ramli Ibrahim, well-known Odissi exponent and Malaysian cultural icon, and Rudrakshya’s Bichitrananda Swain, well-known Odissi exponent and guru. Apart from Guru Kelucharan Mohapatra’s style, which was represented by Swain, the production also saw Guru Deba Prasad Das’ style, represented by the choreographies of Durgacharan Ranbir. 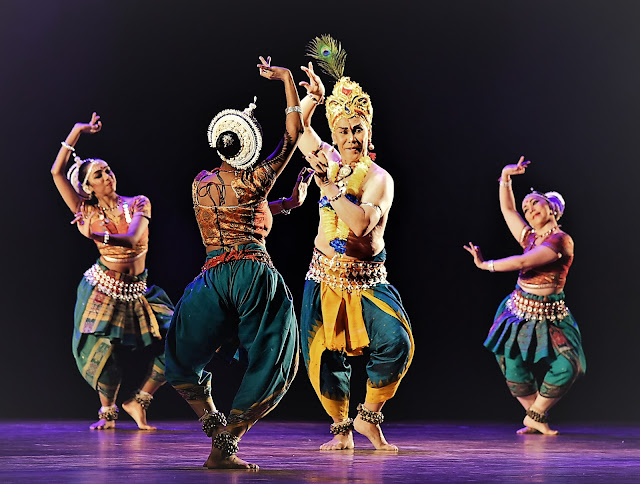 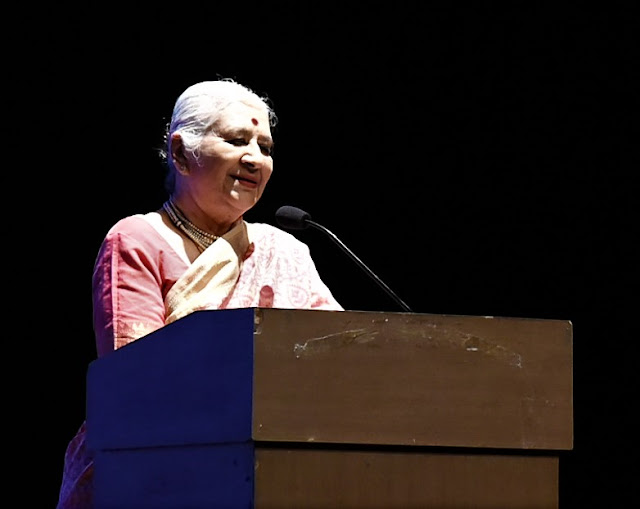 The production was introduced by well-known dance critic and writer Leela Vanketraman, who explained that ‘pallavi’ means pallavit or flowering, spreading in elaboration and intricacies. Pallavi is the centrepiece of an Odissi dance recital. Pallavis are the melodic part of traditional compositions, shorn of all sahitya. So it becomes an abstract composition based on rhythmic structures and creative dance, which shows acute body deflections in tribhanga and swaying. In this production, she continued, the dancers danced in broad chauka and bhramari in the Debaprasad school style. The broad chauka probably adds to a better balance. 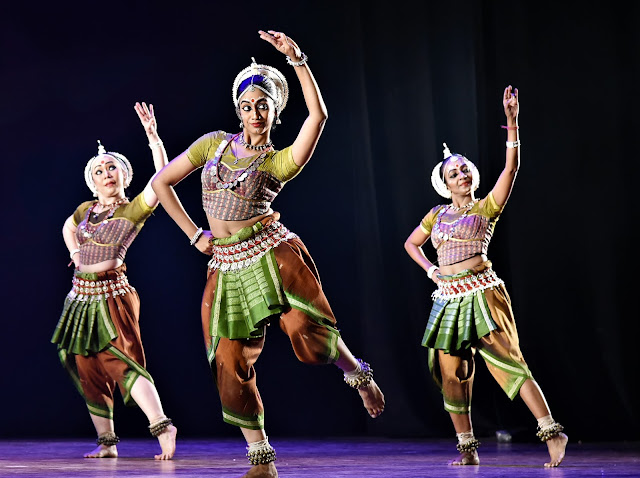 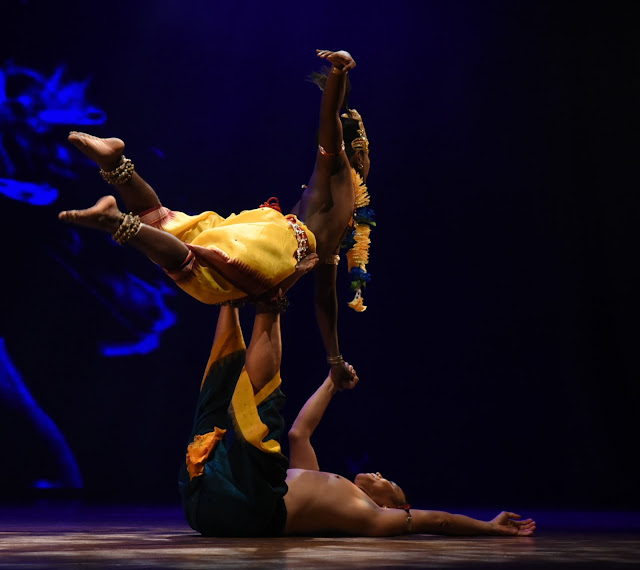 The two schools of Odissi featured in the production represent the styles of the two legendary gurus, Kelucharan Mohapatra and Debaprasad Das. The first pallavi was in raag Kolavati, based on an original dance composition by Guru Debaprasad Das, danced in a group choreography by the Sutra Collective. 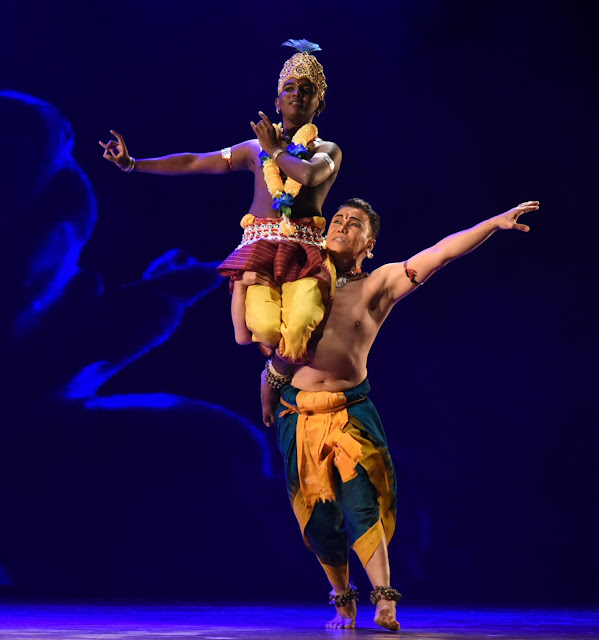 In this piece, Ramli Ibrahim was on stage, following a dancer dressed as a young Krishna. In the background graphics display was the Yamuna and the morpankha. Ramli lay and lifted the young Krishna on his legs, which became an iconic stance for the production. Then Ramli, dressed as Krishna himself, engaged in technical dance with female and male dancers, and then struck some beautiful freezes and postures. The male dancers then lifted the young Krishna in a formation. 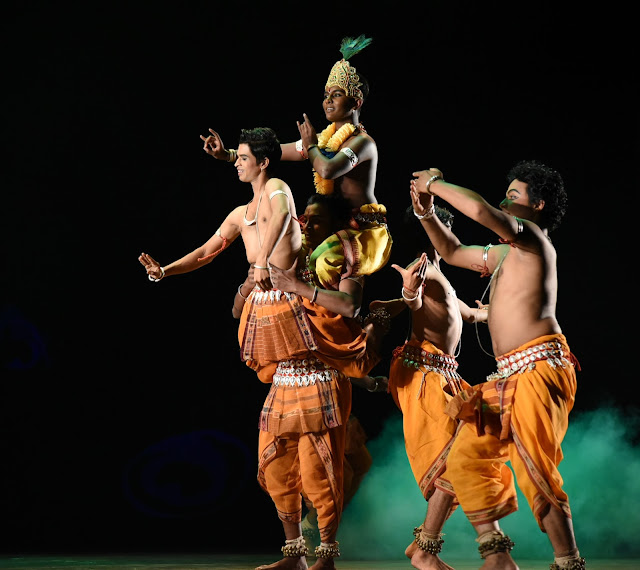 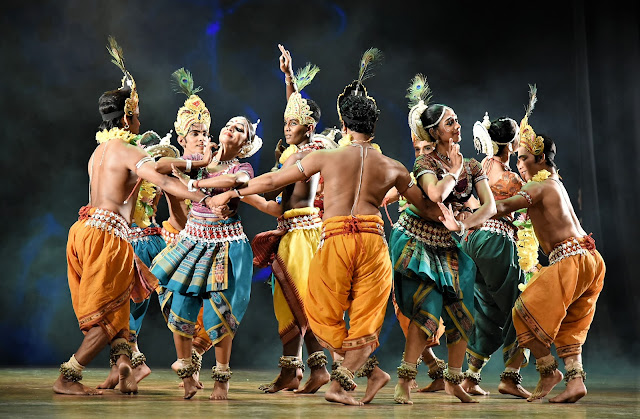 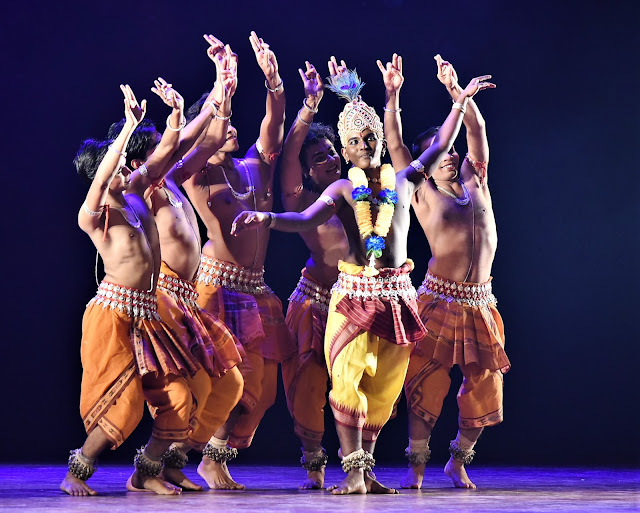 The composition used was the song by Banamali Das, ‘Sangini chitchora’, which says that the sakhi is looking for Krishna, who is adorned with flowers. He wears a morpankha. The dancers did a formation in the peacock dance and finally, a Krishna rasa leela. All the male dancers dressed up as Krishna and created a jhula formation, with two boys lifting a girl and performing a swinging movement. 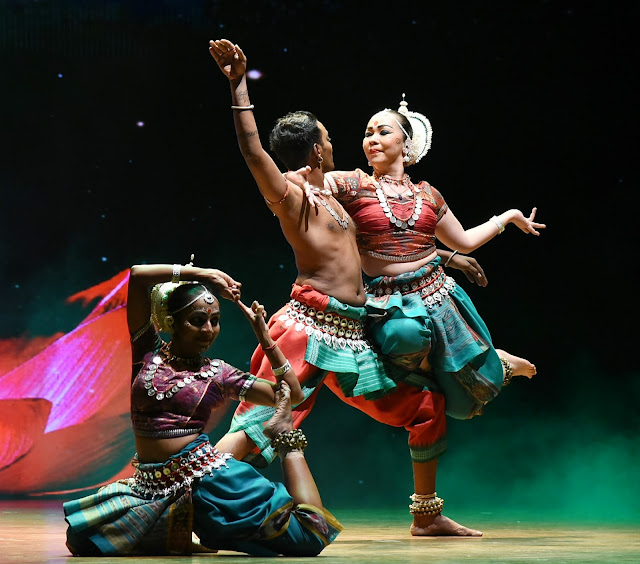 The second pallavi was in raag Mukhari, an original dance composition of Guru Durga Charan Ranbir, performed by the Sutra Foundation dancers. In the backdrop for this piece was a lotus and an image of Krishna. The piece begins with a female dancer collecting and stringing flowers for a garland. The male dancer dancing as the male divinity lifted a girl on his leg towards the end. 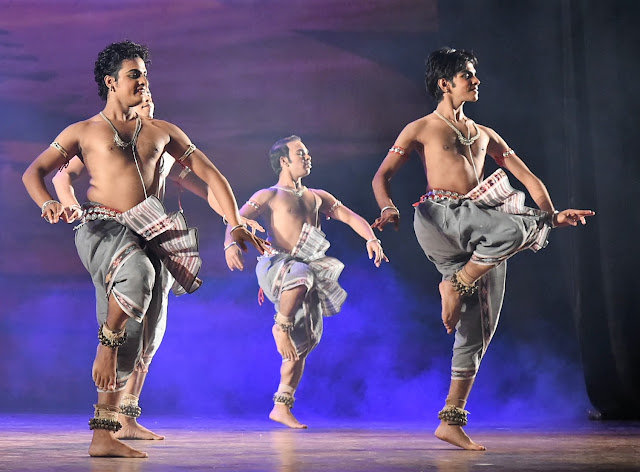 ‘Tala Taranga’ was an original dance composition of Bichitrananda Swain, a pure dance piece. The male dancers began with a broad chauka and then gradually rose to stand on their toes. The movements depicted mardala and other instruments using fast-paced leaps, jumps and rotations. The AV displayed a temple in the background for this piece. The other instruments shown were mridanga and cymbals. 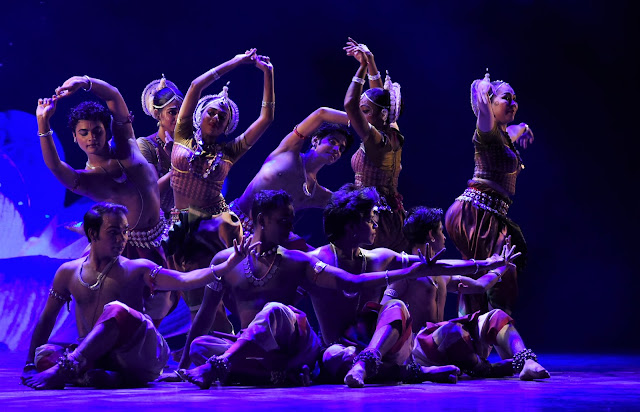 The Shankarabharnam pallavi was a lyrical piece. The image behind the stage was of a blossoming white lotus. The dancers too created formations to show the blossoming petal by petal, starting by leaning in a seated position. The male and female dancers embraced, held hands and leaned on each other. 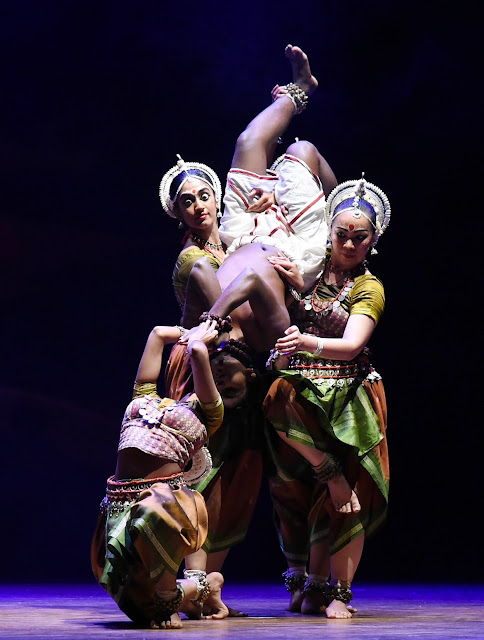 The next pallavi was in raag Chakravaka. The original dance composition is by Guru Durgacharan Ranbir and the group choreography was by Sutra Collective. The multimedia images in the background showed lilies. In the piece, a boy standing in the centre had women entwined around his legs – the depiction of a yogi boy enamoured by apsaras. The women performed sensuous moves slowly and gracefully, moving in coordinated wave-like motions. The boy was moved around by them as if shifting on his legs and feet. His expressions show astonishment and fascination. The young yogi tries to escape but is lured and pulled in. The female dancers lifted him with strong, vicious moves, showing the disruption of his tapasya. 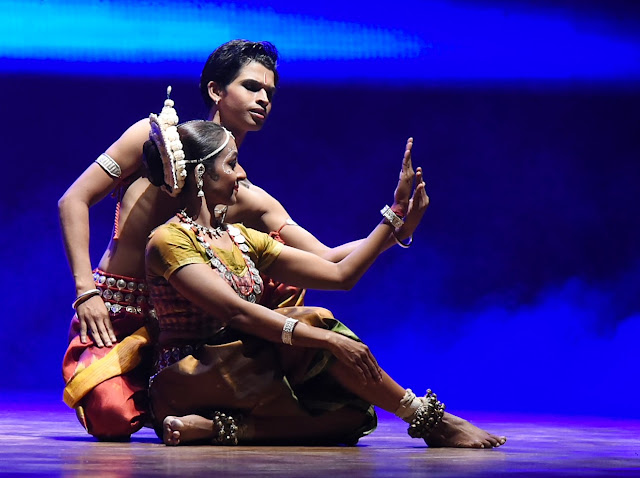 The next pallavi was in raag Ananda Bhairavi, original dance composition by Guru Bichitrananda Swain, group choreography by Sutra Collective. The depiction began with a couple sleeping together. As they wake, the male braids the hair of the female and does her shringara with kajal and sindoor. She puts on her ornaments and he shows her the mirror. In the background, the AV showed the sky and the moon. 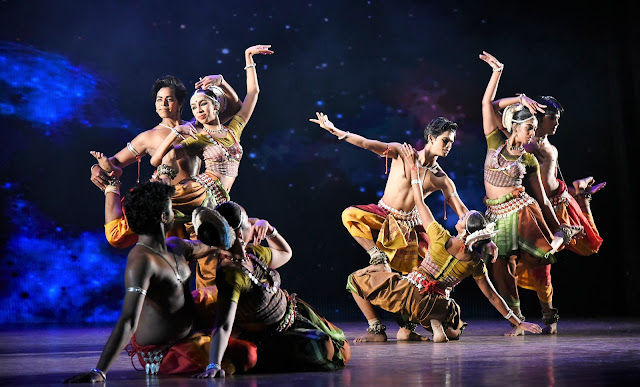 The couple was followed by the others male dancers dancing with the female dancers, depicting the blossoming of love, with the men tying flowers on the women’s hair and partnering them with gentle lifts. A young female dancer was finally lifted, standing on one leg, involved in an embrace. The entire piece had a lot of rhythm, agility and pace. 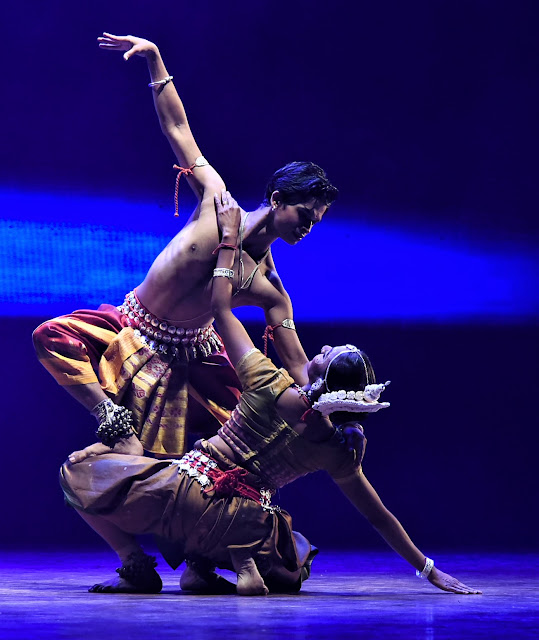 The pure nritta pieces did not have any literature, but a story was built around them, which was shown mostly through nritta and at times through abhinaya. The nritta pieces were executed by amazing dancers with great grace and agility. The stories were very beautifully woven and worked out around the nritta, and did not take away from the technical proficiency of the dancers. The frozen frames and postures, which involved astounding balance, were executed with perfection. 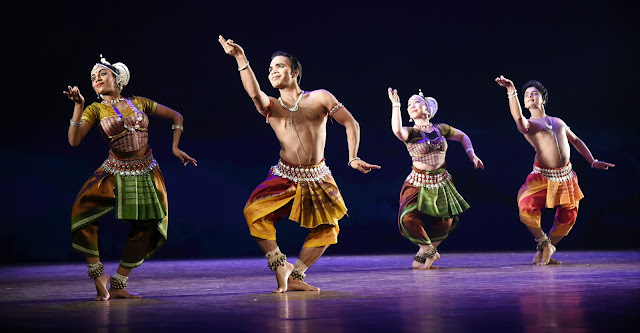 In summary, you could say that the entire production was a celebration of music and rhythm – movement and pace, grace and agility in dance, and as the movements came to a standstill in frames and postures, they defied all gravity. A very wholesome dance experience.