A performance depicting the roots and technique of classical dance becomes a difficult task to report because there are many layers to it. I felt the same way when I watched ‘Vivartana’ by Rama Vaidyanathan, as it had many layers and all of them were not easy to decipher. It is understandable that dance originated as a medium for the expression of emotions, but how did our classical dance forms come to be so laden with the technique elaborated in the Natya Shastra? What inspired that technique?

That is what Kathak guru Dr. Roshan Datye tried to convey through Nritya Samanvaya, staged recently in Delhi. The thought is that each unit of dance movement or stance be broken down scientifically, as if it were the structure of an atom in chemistry.

Dr. Datye has been practising and/or researching Kathak for over three decades. For 10 years, she learnt Kathak from Guru Haider Shaikh in Nashik, and then began training under Guru Rohini Bhate, who was a major influence on her. She is a teacher, performer, choreographer, art historian and author, and is involved in the study of dance as a PhD guide, visiting professor, committee member (Kathak syllabus and structure) etc.

Dr. Datye has been working on the subject of Nritya Samanvaya for two decades. It is a presentation which shows nritta hasta, nritta chari and nritta karanas, which gives a new perspective to dance. This was demonstrated by having three different classical dance styles performed side-by-side to reveal the commonality of the underlying principles. The three styles of dance and the three dancers at this event were Pavitra Bhatt for Bharatnatyam, Ajay Shendge for Odissi and Dhanashree Natu-Potdar for Kathak. Pavitra is the disciple of Deepak Mazumdar and Anitha Guha, Ajay has learnt Kathak and Odissi under Parwati Dutta, and Dhanashree is the disciple of Dr. Datye. All three are acclaimed performers who also teach. 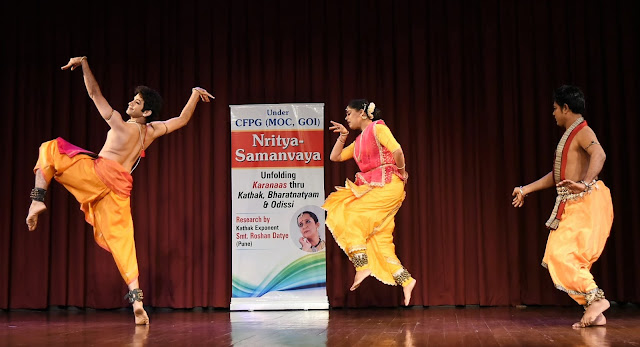 The performance started with the depiction of dawn, when the world awakens, the sound of bells heralding it. This was followed by percussion. As the sun rises, the lotuses bloom, the bees hover. The deer and birds start frolicking. The three dancers depicted this in their own styles.. They ended the piece with chakkars. Ajay wore a yellow dhoti with a red cummerbund. Pavitra also wore a yellow dhoti and Dhanashree had a yellow costume for Kathak, which looked like a dhoti pleated in the front. They all did pranam and footwork. 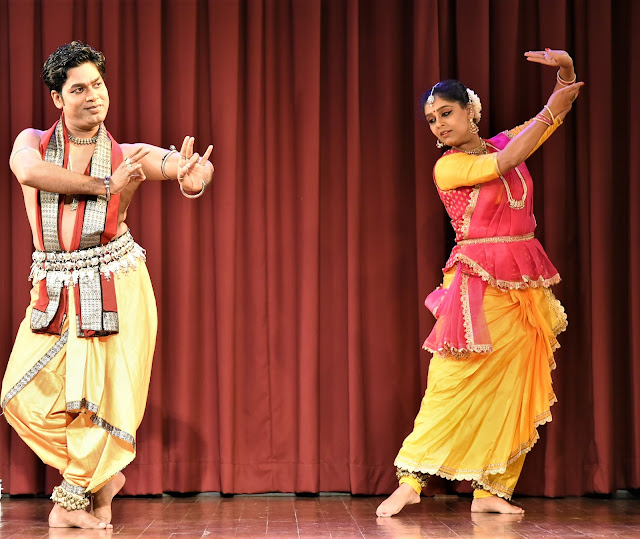 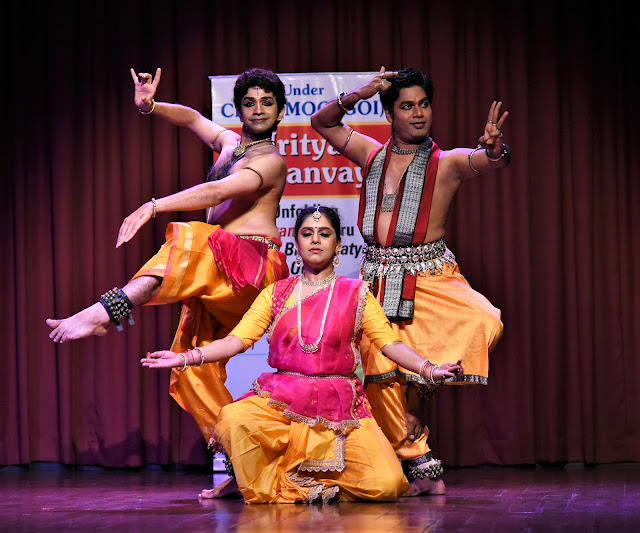 This was followed by Shivastuti, ‘Deva deva mahadeva’. The dancers depicted Shiva’s attributes with stances and gestures. According to the Natya Shastra, Shiva is the adidevata of nritya, the world his stage, and the creation his dance, with srishti, sthiti and sanghar, laya and kriya kala. Shiva was worshipped as tripurantaka, bhootadi deva, bhujangaparikaram, sukhadavadanam, with the damru in his hand, raudram, bhayam, mrigacharma dhari, bhasmadhari, umapatim. The three dancers portrayed the attributes of Shiva in their own respective forms and finally took a stance together to depict the blue god.

This was followed by the technical part, elaborating on the movements of hands, feet and thighs in the three styles. The dancers elaborated on nritta hasta or hand movements, which have lavanya and lalitya or beauty to make the dance alankrit or ornate. The shloka ‘Na tat gyanam, na tat kshepam, na sa vidya…’ was depicted to show the importance of nritta hastas in dance. The five types of hastas depicted were uttan, vartul, adhomukh, tryasra and parshvarg. 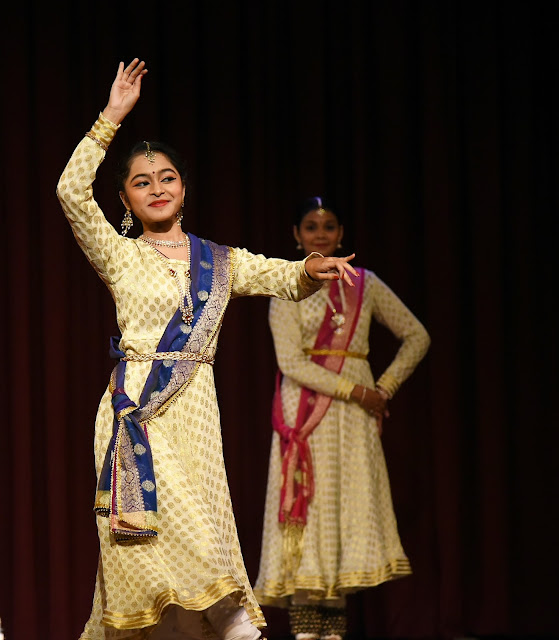 A nritta karan is a unit that has dynamism, aavesh and gati. Here, the hands, feet, arms, forehead, chest and waist all are moving. It is a unit of dance movement. A chari is an important part of nritta and abhinaya in dance. The movement of the waist, sides, thigh, feet and ‘uru’ (encompassing the parts of the body below the waist and above the knees) moving together is known as a chari. The fluent movement of the above mentioned body parts are an important feature of the chari. Dance movements find their elaboration in a chari. Chari is used in nritta, nritya and natya. A karan is a move that has set movements of the body. It has dynamism. According to the shastra, the hands, feet, arms, forehead, chest and waist show a movement which is in sychronisation with the rasa. That is how a karan is described. Understanding that the Sanskrit texts would not be easy to decipher, Dr. Datye has translated them to Hindi in a chhand. 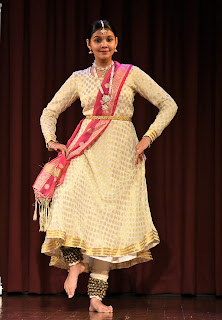 The two very graceful and petite dancers who exhibited a few of these karans were Shashwati and Mayuri, both disciples of Dr. Datye. 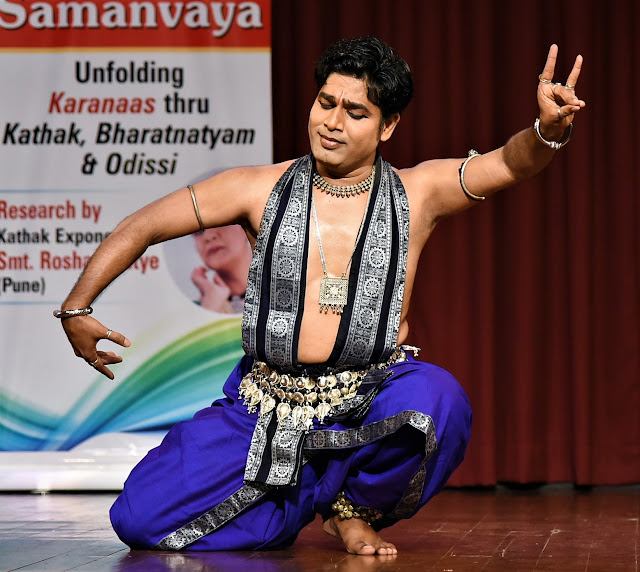 Next was the presentation of a composition by each dancer giving a glimpse into the present-day form of these nritta components. Ajay presented a pallavi in raag Mallika with Kedar, Hamir and Chhayanut raags in ektaali in mishra jati.  Choreography was by Guru Madhavi Mudgal and music by Madhup Mudgal. This had swaralankaar as its main component. Ajay wore a blue costume for this piece, showing the grace, pace and movement in Odissi. It also exhibited the beauty of footwork and hastas in Odissi.

Pavitra Bhat in red aharyam presented a varnam in raga Mohanam in aditalam by Swati Tirunal. Pavitra has mastered the technique of nritta. First, he exhibited his movements with great expanse and flexibility in various nritta stances and postures – for example, shakatasya, vikshit bhujang, vikshipt, bhujang trasit, dolapaat and garud. The varnam was a piece on Lord Krishna – ‘Bansiwale Ne Man Moha’. His nritta showed great stage coverage in jumps and leaps using the footwork and hastas mentioned above. ‘Boli bole meethi laage’ described the trees, the clouds, the lotus eyes of Krishna and his smile, with various stances to show the mor-pankha and playing on the flute in various ways. 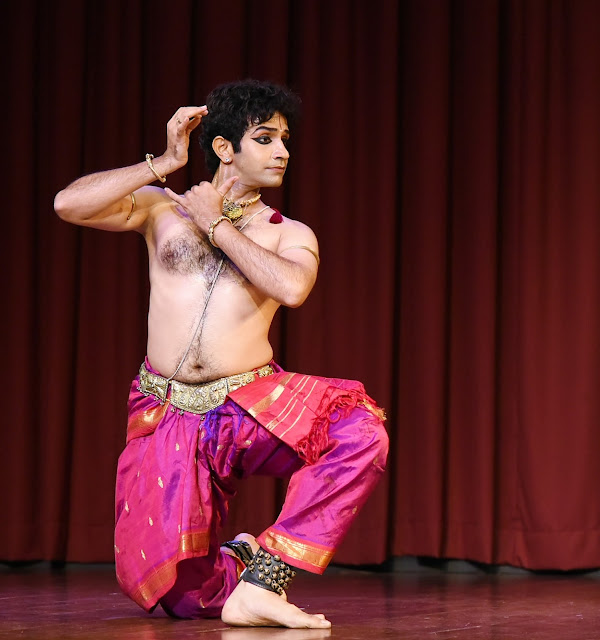 Finally, he depicted Padmanabha Prabhu reclining on the Sheshanaga and the chaturbhuj roop of Lord Vishnu showing the four hands. The nritta had a lot of agility, leg lifts, leaps and rotations. He ended his piece with a depiction of Dashavatar in quick succession. Finally, he took the stance of Lord Vishnu reclining with one leg folded and the lotus emerging from his navel. This dance piece had a lot of energy and movement and yet maintained grace and fluidity. ‘Kalindi ke teer dhade bansuri bajaye’ – the vocals were very melodious.

Then Dhanashree presented a dhrupad composed by Dr. Rohini Bhate. It was an anvat rachna in 7-and-a-half beats. It was a Ganpati nritya. The karanas used were lata, vrishchak, vishkumbh, noopur, vikshiptakshipt, gaja, kriditak etc. She started with footwork, paran, depicting Ganesha as lambodar, tundadhar, with chakkardar paran. Ganesha’s gait is very lalit, a swaying walk with the ears moving in like elegant fans.There was an interlude of footwork in between. He has an ardhachandra on his head, ‘Parvati bali jaaye’, ‘nritya gaan karat’, ‘Gauri sut’. Lastly, she depicted the stance in which he sits. 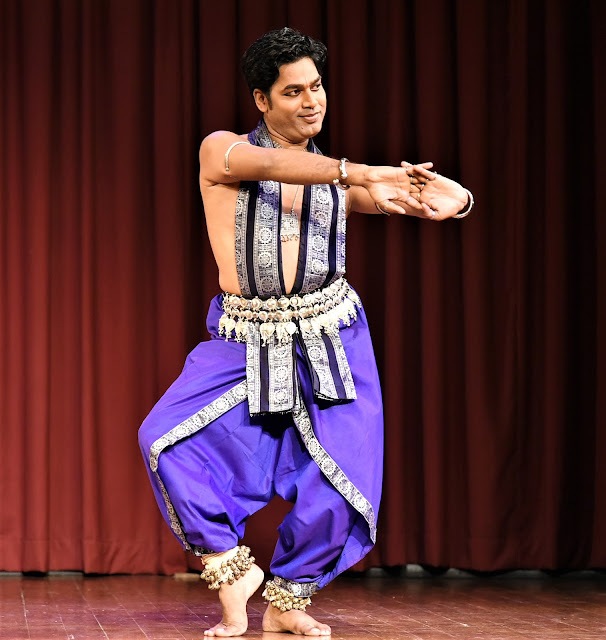 Next, Ajay showed Dashavatar from Geet Govind. The karanas used were janit, shakatasya, ardhaswastik, uromandal etc. Ajay went on to depict the five avatars of Vishnu – matsya, varaha, Narsingh, Ram and Kalki. Through hand gestures, he depicted Lord Vishnu as the fish, sookar holding up the earth on his tusks, Lord Narsingh tearing apart Hiranyakashyap, Lord Rama vanquishing Dashamukha and Kalki riding a horse and roaming the earth to vanquish evil. There was a lot of flexibility in his nritta.

Finally, Pavitra did a tillana. A tillana is usually done at the end of the performance. It is a piece with laya and pace. The raag used was Vrindavani sarang, in aditalam. His nritta showed amazing footwork, hand and foot movements. The leaps were done with great agility, with both feet in the air.
Dhanashree then presented a sargam in Kathak. The sargam inspires the nritta and the lyrics the nritya. The composition by Dr. Datye was in raag Basant manjari, in teen taal. The nritta portions were well-executed, with leaps and chakkars. ‘Vrindavan bahaar naval beli, nava prasoon’ was shown with a thaat, and ‘phoolan dari, kamal bhanvare, the vayu or sameer, jhuki jhuki daali’ with a paran and parmelu, ending the piece. 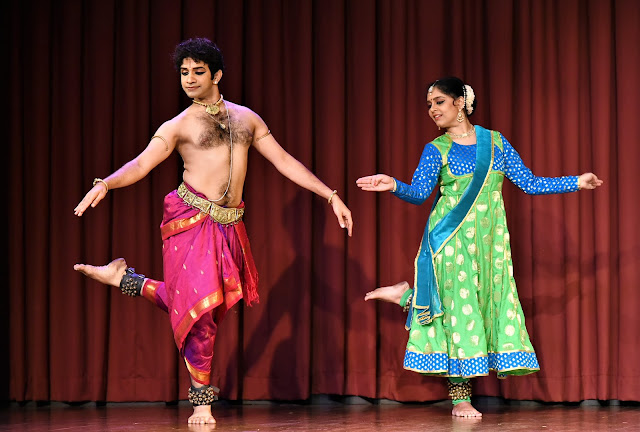 The next piece was a nritta dominant one called tivat, which has a lot of dynamism. Here, the bols from tabla and pakhawaj are blended to elaborate the technique with nritta karanas. This is an anvat composition because the bols are woven together to make a composition. The composition was by Dr. Datye and the music was by Dr. Chaitanya Kunte, in raag Madamat Sarang, in teentaal. The three dancers exhibited nritta in their styles, again with a lot of expertise and energy, with footwork, hastas, squats and graceful movement. 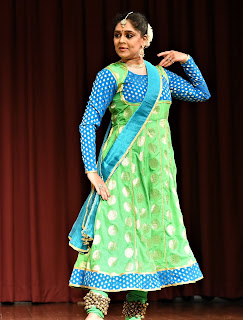 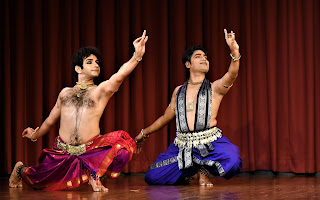 Finally, the performance ended with the last shloka of the Natya Shastra, in which Bharatmuni prays for prosperity, peace to the cow and the Brahmin, and for the protection of the subjects by the kings of the earth. At the end of this performance, I was left totally spellbound by the immensity of the elaboration of the technique of dance, which, on its own, even without the lyrics, has the great potential of holding the audience. The three dancers excelled in their technique, with their bodies moving effortlessly to show the various coded karans of dance.

I have not yet elaborated on Dr. Datye’s speech and on my conversation with her because that is one layer I would like to dig deeper into and elaborate separately. So far, we have just peeled the electrons orbiting the atom on the outside. I have yet to get a peek into the nucleus.
The concept, research and choreography for Nritya Samanvaya were by Dr. Roshan Datye. The music was by Dr. Chaitanya Kunte, commentary by Abha Auti-Soman, and assistance by Chittaranjan Datye. In the music, the vocals were by Manoj Desai and Priya Sathe, tabla by Nikhil Phatak, pakhawaj by Prasad Joshi, harmonium by Dr. Kunte, sitar by Aniruddha Joshi, flute by Sandip Kulkarni.