I have previously reported Shivani Varma’s Kathak performance presented by Guru Shovana Narayan for Uttaradhikar. For the next Uttaradhikar presentation, Arushi Mudgal performed Odissi at IIC, presented by Guru Madhavi Mudgal. The stage and foyer were bedecked generously in cheerful marigold flowers. Before the performance, introducing her disciple and niece, Madhaviji said that all gurus have been shishyas once. A true guru never wants to create clones, she said, they always nurture creativity. She mentioned that Arushi has had the good fortune of being in the company of the legendary Guru Kelucharan Mohapatra for a short while. 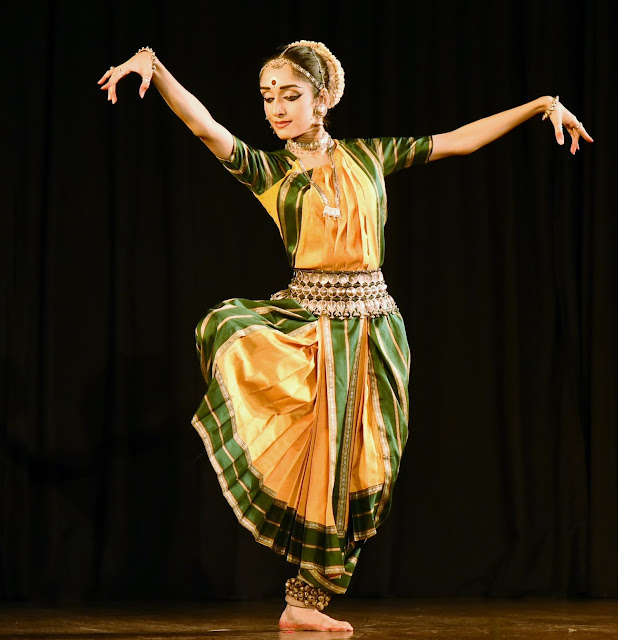 At the age of five, Arushi started learning Odissi from her aunt, Madhaviji, the sister of Hindustani classical music exponent Madhup Mudgal, her father. She and her vocalist sister Sawani are the youngest generation of the family of Shri Vinay Chandra Maudgalya, who founded the Gandharva Mahavidyalaya. She completed her graduation in Odissi in 2007. She has performed extensively as a soloist and in her guru’s troupe in India and all over the world. An acclaimed dancer in her own right, she also gives lec-dems for SPIC MACAY. She has been honoured with the Sangeet Natak Akademi’s prestigious Ustad Bismillah Khan Yuva Puraskar, the Indian President’s Bal Shree Award, the FICCI Young Women Achievers’ Award, the Chitra Kala Sangam Samman, the Sanatan Nritya Puraskar and the Original Mind Award for her contribution to Odissi dance. 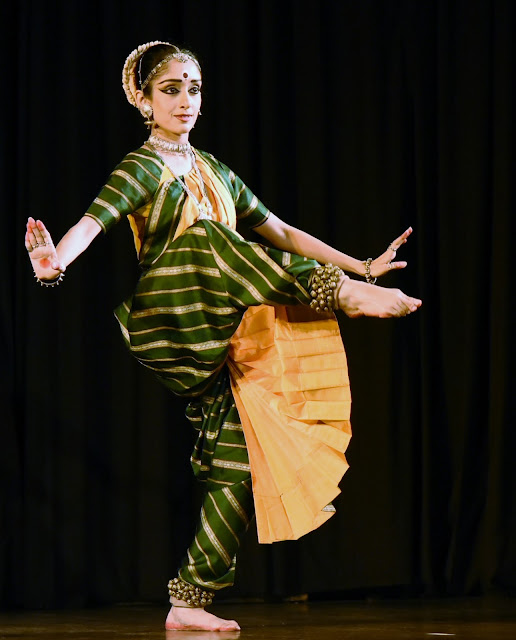 In this evening’s performance, Arushi looked beautiful in green and yellow aharyam. The first piece was an ode to Lord Ganesha as the dancing lord – Jai Ganesh. She depicted the attributes of the lord and then went on to show the dance of the lord to the notes of the mardala – his elephant ears swaying, his trunk moving, the recitations chanted ‘Om gam Ganapataye namah… vighnaharan, vinayakam, ekdant, lambodar, vakratund, mahakaye, shankarsut, umaputra, modakpriye, dhumravaran, bhalchandra’, the mouse his steed. These attributes were depicted through gestures, postures and stances. The dancing for this piece was rendered with precise footwork and hastas, and very rhythmic movement. Each movement and stance was perfect and complete. 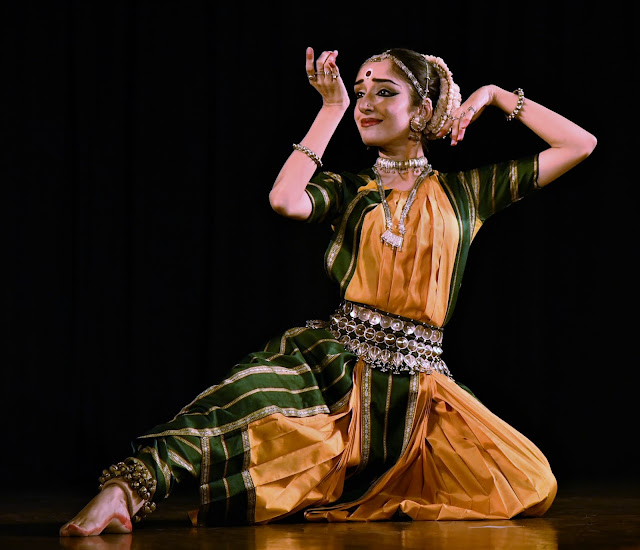 The second piece was a Jayadeva ashtapadi, ‘Raase harim iha vihita-vilasam, smarati mano mama krta parihasam’. Radha sees Krishna in raas romancing other gopis. Dismayed, she hides in a thicket where the bees are hovering, and looks at Krishna. She is in great self-doubt, but cannot help dwelling on the beauty of Krishna. The music was by Madhup Mudgal, sung by his daughter Sawani, Arushi’s sister. In her depiction, Arushi showed Radha looking for Krishna everywhere; finally, she sees him in the nikunj, involved in leelas with the gopis. Disheartened, hiding in the thicket, Radha’s eyes are moist – and so were Arushi’s. Radha is thinking of the melodious tunes that the flute would play, ‘sancharad adhara sudha madhura dhun’. She is thinking about his beauty as his lips play the flute, the nectar from his lips flowing into the flute. She glows at the image of his earrings or kundal swinging on his cheeks. She remembers his meeting her under the kadamb tree and she is still imagining his face close to hers – in her imagination, touching it. He had allayed all her fears, and yet, he is with others – she is pained by the sight and falls into despair. Arushi has absolutely perfect technique in the nritta portions, with very neat movements, but her abhinaya impresses you more. The plethora of expressions that play on her face show her expertise at it. 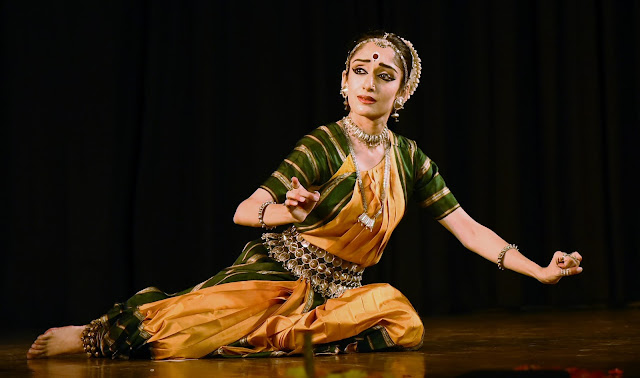 The third piece was based on a devotional song in which a Muslim bhakta,Salabeg is denied entry into the Jagannath temple and prays to the lord to destroy all darkness in his life. He is standing outside, straining to get a glimpse of the mighty lord. The performance started with the sweet note of the flute. The bhakta kneels in front of the temple and pleads to the lord that all miseries in his life be destroyed, like an elephant destroys the forest by trampling on it. Arushi gracefully depicted the gait of an elephant. This was followed by nritta with footwork and leg lifts. As the bhakta pleads to the lord, he reminds him of his kindness to others who had prayed to him. When the alligator grabbed the foot of Gajendra, he cried out helplessly for you. You came with the chakra to save him. Here, the stances depicting Lord Vishnu holding the chakra were taken by Arushi with a lot of grace. The tale of Draupadi was presented in great detail. She depicted the Kuru Sabha, where the game of dice was being played between the Pandavas and the Kauravas. She depicted the despair of the Pandavas and the shrewd manner of the Kauravas. Draupadi is brought to the sabha pulled by her hair, and as she is disrobed, Krishna comes to her rescue as her sari at her pleading. Bhakta Prahlad was shown performing pooja when his demon father Hiranyakashyap admonishes him against Vishnu bhakti. Lord Vishnu appears as Narasimha, puts him on his lap and disembowels him with his claws. Whenever the bhakta makes a sincere appeal to the lord, the lord always appears. And here, the Muslim bhakta is pleading his case for just a glimpse – ‘Ahe  neelo saila’. 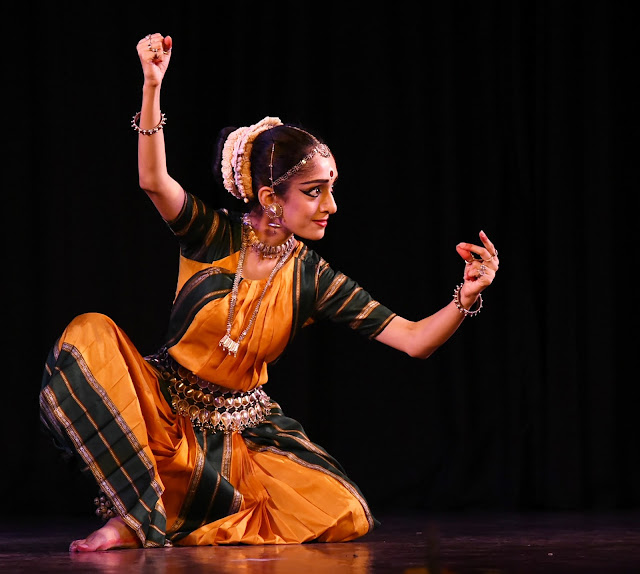 The final piece was a pallavi in raag Bhairavi. The music composition was by Madhup Mudgal, the flute played very melodiously by ?. The footwork in tribhanga and chauka had a lot of flexibility and fluidity. The hand movements in the nritta were very delicate. The dance was very rhythmic, with several leg stretches, and Arushi covered the whole stage. ‘Om purnamidam purnata purna mudachate, om shanti shanti om’ – it ended with the shanti paath and prostration.
Arushi, the niece of her guru, Madhavi Mudgal, and has truly inherited not only her genes, but has also imbibed the grace of dance from her guru. She has indeed proven to be a true uttaradhikari. Her stage presence is full of charm and her technique is perfect and precise. Her footwork on heels, feet rotations and stances all come out very well, with very neat and delicate hand movements. Her swaying and fluidity come across as very smooth and effortless, and her abhinaya is very mature, going into the nuances of each expression. It was one of those performances that holds the audience with its brilliance. The added delight of this performance was that her older sister, Sawani Mudgal, was on the vocals, which were very soulful, sweet and melodious. 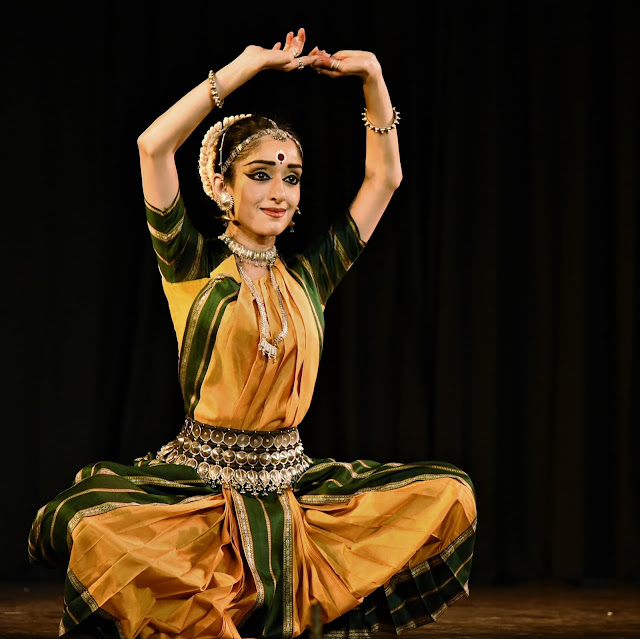 On the pakhawaj was Khadag Singh, on vocals, Sawani Mudgal and Kushal Sharma, on the flute, Rajat Prasanna, on the harmonium, Chaitanya, and on the tanpura, Diwan Singh.