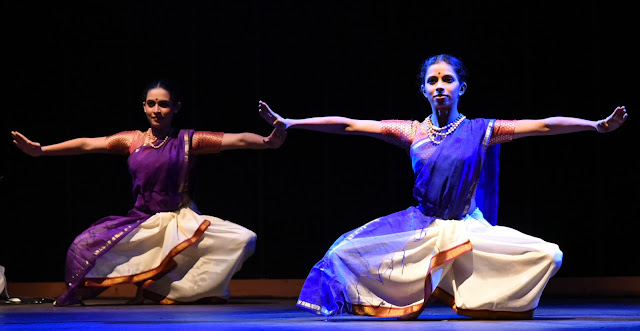 Dr. Arshia Sethi and the Kri Foundation presented the Madhavi Dance Festival at IHC in Delhi. It was an ode to Madhaviji, Rama Vaidyanathan’s mother. On the first day, ‘Naama Mhane’ was performed by Vaibhav Arekar and dancers from his Sankhya Dance Company. In the foyer, there was a beautiful display of a saree flowing from a brass pot  with flowers, and on the stage was a picture of Madhaviji adorned with flowers. ‘Naama Mhane’ is the tale of Sant Namdev, a famous saint. He was a Vaishnav of the Varkari sampradaya, which was initiated by Sant Gyaneshwar. This tale is about Sant Namdev’s journey of spiritual awakening, when, from an individual bhakta, he becomes a social reformer and a spiritual teacher.

Vaibhav has learnt Bharatanatyam from Saroja Srinath, Tangamani Nagarajan and Dr. Kanak Rele, from whom he received advanced training in abhinaya and performance technique. He has a Bachelor’s degree from the Nalanda Nritya Kala Mahavidyalaya, and a Master’s degree as well. He has learnt the basics of Kathak from Rajashree Shirke and of theatre from Chetan Datar.

To me, this performance was not just about classical dance and choreography, but about the whole spiritual experience of bhakti growing within the devotee. Namdev was a devotee as a child, and his ishta, Lord Vitthala in Pandarpur, was very fond of him. As he grows, the bhakta in him matures and he becomes the initiator of a movement to include all into bhakti and bhaktajana, irrespective of their class, creed or community. 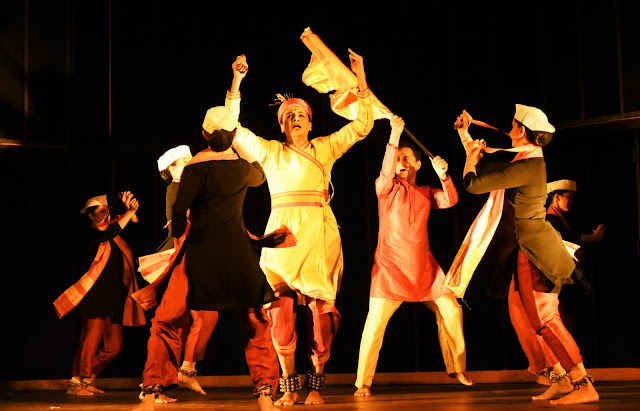 The performance started with an ode to Lord Vishnu, ‘Achyuta shridhara madhava mukunda shantiroopa’, showing Lord Vishnu reclining on the sheshnag. The music and vocals were very soft. It was made into three scenes – ‘ishtavitthal’, ‘khud ki khoj mein’, and ‘samaj’. Namdev is shown as leading a group of people singing and dancing to the tune of sankirtan, ‘Jai Rama Krishna Hari’, with kanjira and khartal. His costume was a dhoti, angarakha and a cap. The bhaktimarg is about love and atul bhaktibhava. The ‘Japa Vitthal Vitthal’ rises to a crescendo, creating goosebumps and a lump in the throat. They carry the flag of their sampradaya. 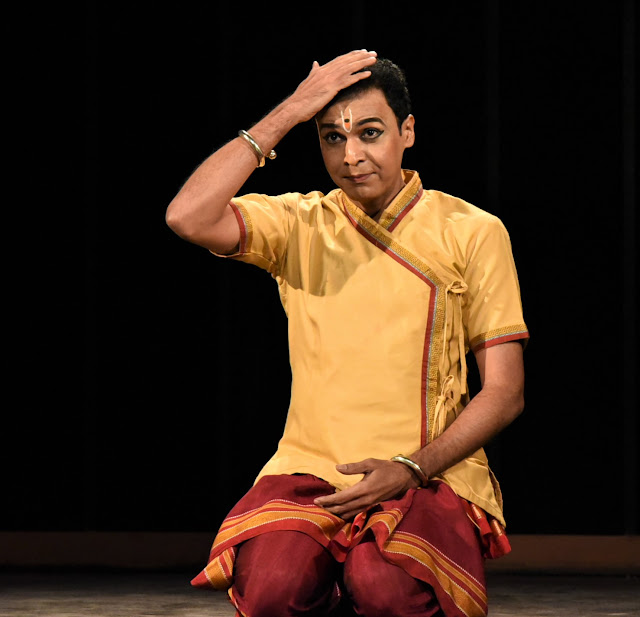 At this juncture, the scene changes and we are taken to the times when karmakand was the uppermost. Caste, colour and creed with the basis for discrimination, and some means were needed to abolish this. Namdev, at that time, was a Brahmin child. He would call Vitthal his aai or mother, or Vitthaai, and that is how the performance was relevant as an ode to Shri Madhaviji.
His mother sends him to the temple with the naivedya for the bhog of the lord, as his father is not around. Arekar as Namdev was dressed in a short tunic and dhoti. He rushes to the temple with the bhog and requests the lord to partake of the food. But the idol does not move. The young Namdev starts playing with the Lord. He shuts his eyes, peeping now and then, turns away, hides, and yet the Lord is unmoving. So finally, in desperation, he decides to bang his head at the lord’s feet, swearing by the taste of the food. The nritta, footwork and the jathi were very powerful, on one hand, and on the other, the abhinaya so realistic that it brought tears to the eyes. Now the lord finally had to appear and accept the food. From then on, Naama would come every day, giving the Lord Vitthal a snan, pooja, dressing him up, and putting a tilak on his forehead. Even Sant Gyaneshwar acknowledged that Naama was the only one to whom the Lord would come. They play together each day. The piece ended in a Marathi sankirtan by a group of dancers. They rotated on their knees to the manjira. 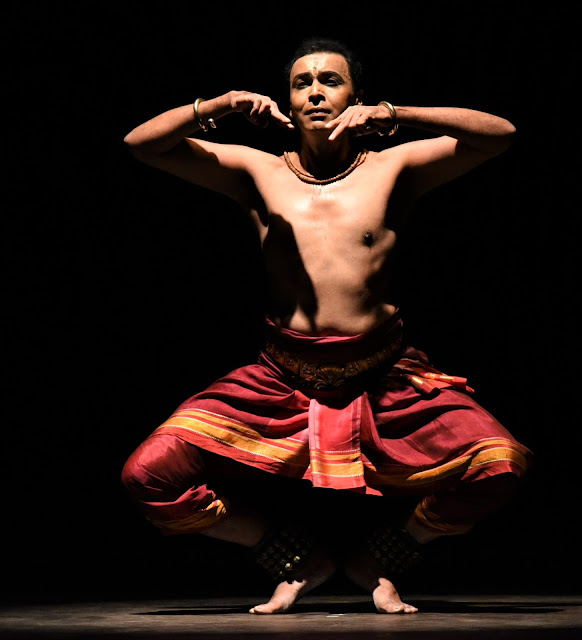 The second phase was ‘khud ki khoj mein’, and what was depicted was how, when somebody achieves something, pride begins to govern their actions. Even the bhakta is not spared this emotion. His inner voice coerces him to look for a guru. The mind becomes clouded by a sarp-roopi or snake-like vasana. The music for this piece was an alaap, and the dance was intense, showing the turmoil in the soul of the bhakta. This was a solo act by Arekar, in which he did not use his dance form so much as he did the emotive movements that could create magic – the agony within was brought out, the snakes coiled around the body, the hands flailing and moving in circular movements. It was a very disturbing sight for the audience to see the body purging itself of this negativity and letting go by rubbing hands. Again, the bhakta is angry and kicks the air. Suddenly, in contrast, crying, he feels the romanch in his body. He runs away from this pain and goes into a samadhi, chanting the name of Vitthala. This again was an emotive solo by Arekar. 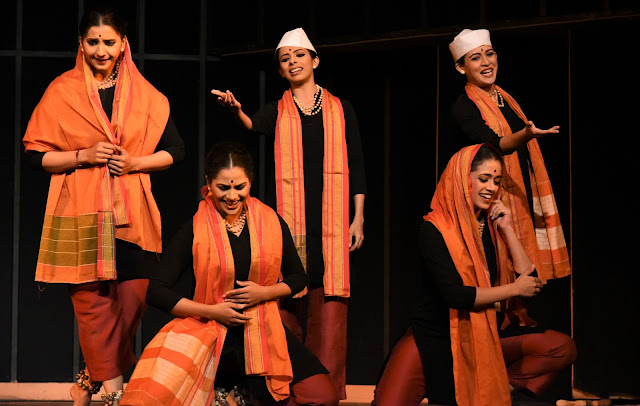 In the final phase, the third, he has his spiritual or adhyatmik awakening. The naam smaran is sakriya and continuous. As a social reformer, he discourages social untouchability. Work is god, he preaches, to see your god in your everyday chores. Zanabai and Gora Kumbhar are among the other poets who have preached the religion of work. 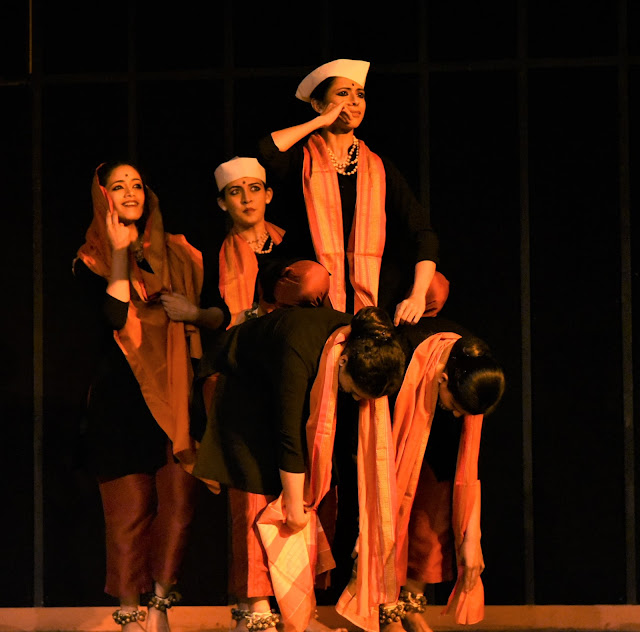 The scenes of women selling bhaji and singing to the Lord were rendered well, with the dancers singing along. People, while working in the farms, sing his praises, sorting grain with a sieve. The sankirtan continues with the Bharatnatyam. There was no violence on the basis of caste. 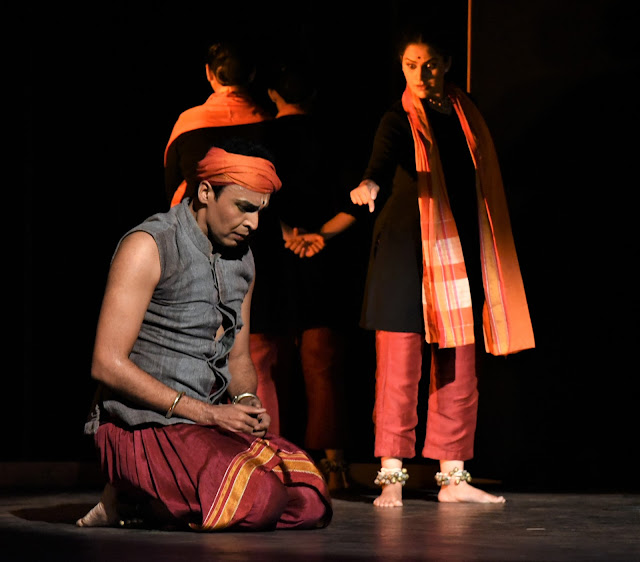 Soharmaiba was one labourer who just wanted a glimpse of the Lord. He works on his wooden instruments and seeks the darshan of the lord, and finally dies there. Naama picks his cap and puts it on his head, symbolising that he has taken up his cause of seeking a glimpse of god. 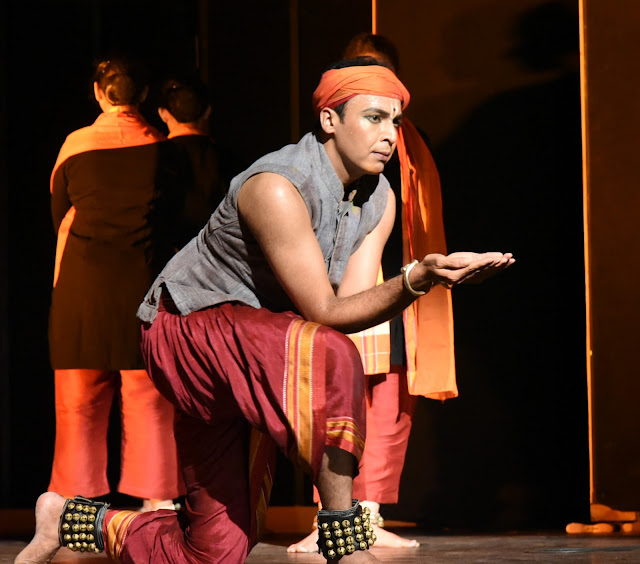 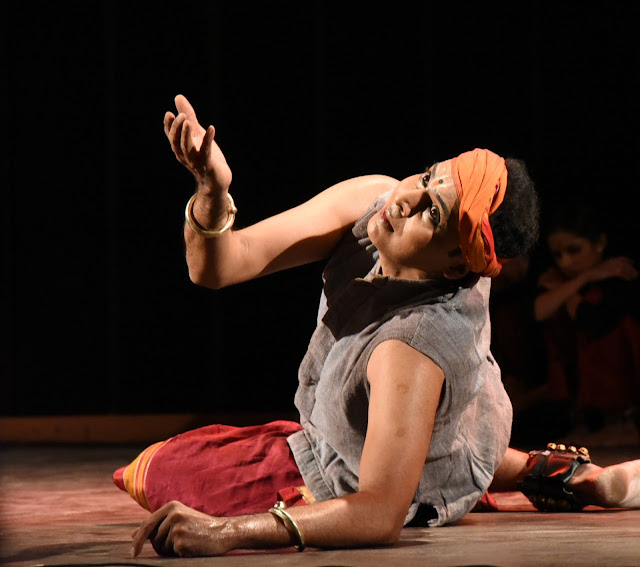 He lifts his body to make a samadhi of him just outside the temple so that anybody going into the temple worships at the samadhi. The lord is the saviour of the downtrodden, says the piece, as all the scriptures have preached, like the elephant was saved from the crocodile. 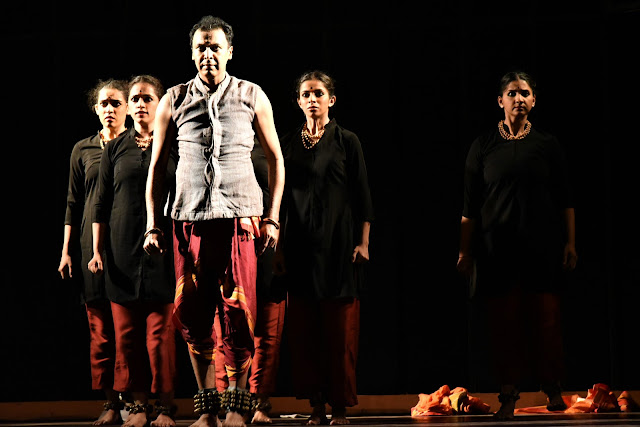 Finally, in a thillana, Vishnu was shown reclining, and the group clapped and jumped in ecstasy during sankirtan, with the heart-rending chanting of ‘Jai Vitthala’. This truly was an unforgettable experience. 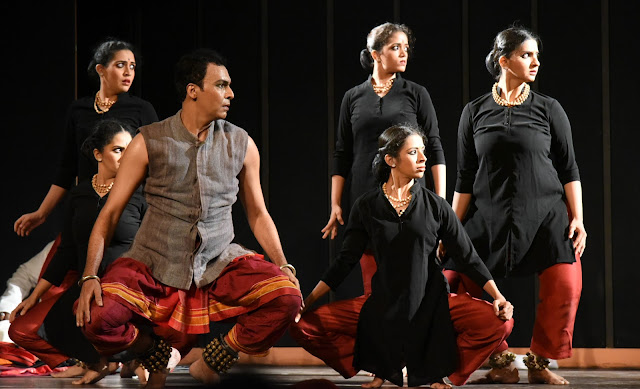 Later, answering some questions, Vaibhav explained more about the background to the production. About the second piece, Vaibhav said, “I was looking at the flaws – moha maya kaam krodha - I was looking at all those as flowers, looking to interpret them as abstractions in a certain way. I’m looking at how to go to an experience when I’m on stage, not when I’m practicing. So it was an experiential state for the 10-15 mins of that ragam, tanam, pallavi, and so we did not set into a taala. So this is about finding out what is in me in that point of time. What I am eating (in frenzied gorging movements in the second part) is moha – I keep eating eating. It’s a common thing. How does it turn into a flavour, aroma - and how these things come into a movement. About even the physical attraction, the skin, about touch, seeing, hearing – all those things came into it. Namdev might have been a saint, but it’s obvious he also went through a process. It’s not so easy for anybody to say I’ve climbed a ladder and it’s done. A few of them like Gyaneshwar, Shankaracharya, have been there, you know. Namdev was married, he had five children, so that tells you there must have been a process that he must have gone through to achieve sainthood. Again, they (these saints) don’t talk about going into a kind of Upanishadic recluse. They said stay here, touch, find out what is nama shakti. So that piece made me look within myself first.” 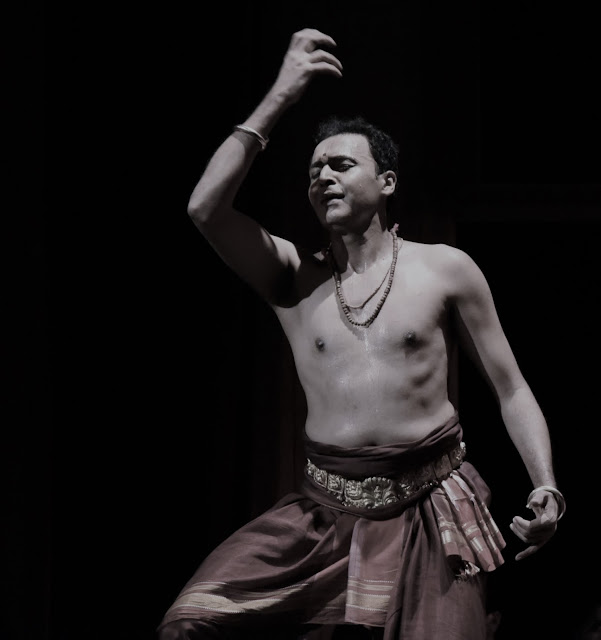 Talking about weaving emotional expression into Bharatnatyam, he said, “I find we need to extend ourselves a bit, find out, if I do an abstraction, what it means to be a Bharatnatyam artiste in today’s world. I don’t do the piece unless it affects me personally. Otherwise, I feel I’m faking it. So I went through a process of finding out what it meant for me as an artist, and since I’m a Bharatnatyam dancer, all that comes out is Bharatnatyam. I have not learnt anything else. I do relate to things of movement – I’ve done serious theatre, I think about it – but you look at the stances that ‘feel Bharatnatyam’. Because I don’t want to do contemporary for sure.” 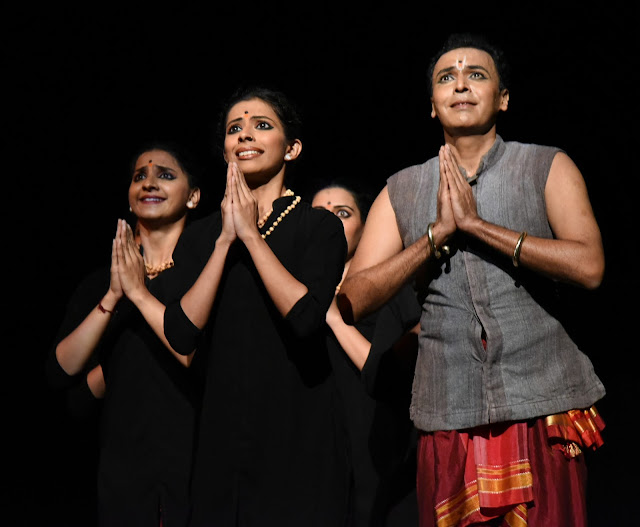