The foyer at the India Habitat Centre was decked up in flowers and rangoli when Usha RK presented Shri Kshetra, featuring Shriranganath of Shrirangam and Shrinathji of Nathdwara, in Delhi. The production saw Pavitra Bhat as Shriranganathji in Bharatnatyam and Abhimanyu Lal as Shrinathji in Kathak.

Mumbai’s Pavitra is now an established young dancer and a disciple of the renowned Bharatanatyam exponents Deepak Mazumdar and Anitha Guha. His initial training was from Kalanjali under Kumari Vasantha. 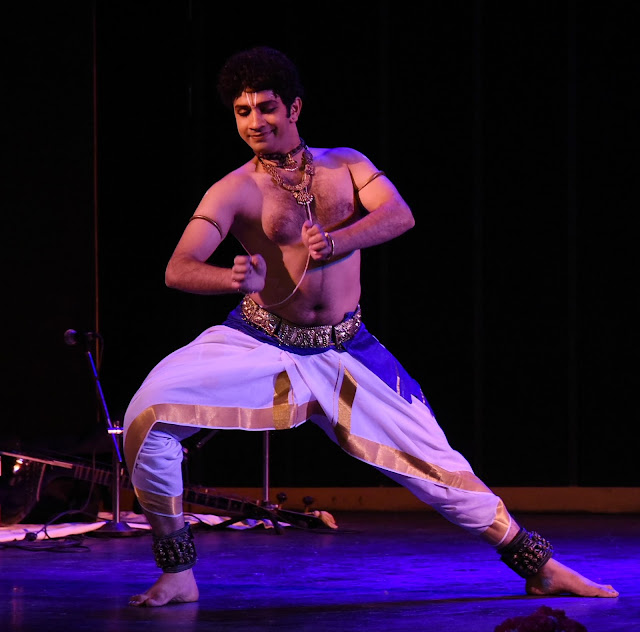 Shrirangam is an island and part of the city of Tiruchirapalli, famous for Shrivaishnavite population and the Shriranganath Swami temple. It is considered the largest functioning temple in the world – 6,31,000 sq m in area. It’s a swayam-vyakt kshetra of Lord Vishnu. There are seven enclosures, each with a rampart wall, and 21 magnificent towers or gopurams. The island is formed by the twin rivers of Kaveri and Kollidam. The Shrirangam temple is one of the three temples of Lord Ranganatha, the Adiranga, and is situated in Shrirangapatna. The other two are Madhyaranga (Sri Jaganmohana Swamy at Shivanasamudra) and Antyaranga (Sri Aranganathar of Srirangam at Trichy). This was the elaborate description of the kshetra or temple given by Usha RK in her very clear and articulate manner.

In Pavitra’s presentation, the devotee seeks a glimpse of Shriranga. He starts his journey from Kaveri to the garuda chamber till he gets the darshan, merges with the lord and becomes one with him. As the performance began, Pavitra started with an ode to Lord Vishnu. Pavitra’s appearance indicates great agility and grace, though in a very masculine way. The stuti by Adishankaracharya said, ‘Omkara bindu sanyuktam nityam dhyayanti yogina kamadam mokshadam chaiva omkaraye namo namaha.’ The bhakta starts his journey with holy ablutions at the Kaveri. He worships and gives anjali to the river, praising it as the ‘bhakti, mukti, tadayani, sarva papa vinashini’. For this piece, Pavitra wore the Vaishnav tilak on his chest, forehead and back, and a red hip cover. The holy river is vibrant with lotuses, bees and flowers as the devotee goes forth. He describes the beauty of the temple, the surroundings, he sees the moon and the clouds trying to hide the moon. There are creepers entwined around the pillars and the devotee gets the darshan from afar. The dance had a kind of tranquillity about it. 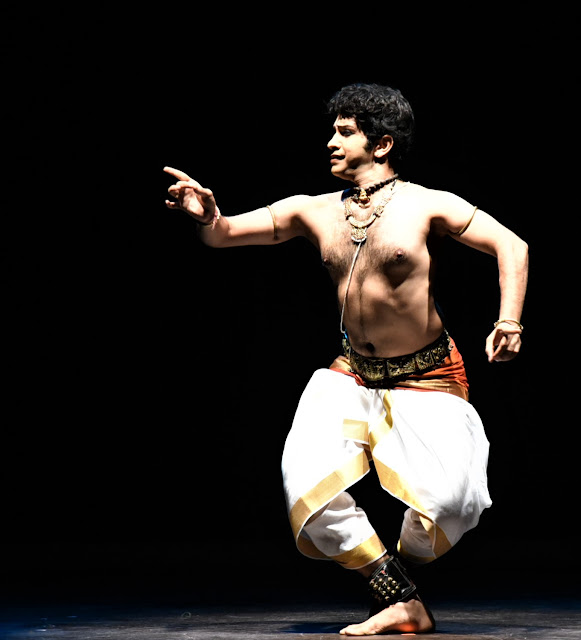 Next was the depiction of ‘Dashavataram’ and sankirtan. The depiction was brief and fleeting and yet, you could not miss the precision of all the movements used to show the ten incarnations. The abhinaya and dance evoked great reverence.

The devotee then reaches the chamber of the Lord’s steed, Garuda. The permission of Garuda has to be sought before you proceed into the temple. The piece rendered was ‘Garuda Kauthavam’. The Garuda is referred to as the ‘pakshiraj’ with a swarnavaksha. This was depicted in a broad plie by Pavitra. He wore a yellow hip cover for this piece. The magnificence of this bird was shown with flying movements performed on one leg – the expanse of his wings, his continuous chanting of ‘Hari-Hari’. The jatis were quite appropriate with excellent footwork, ending with a ‘namostute’. Lord Vishnu mounts him and takes off, and Pavitra’s rotations on one leg while depicting this stance were astounding. 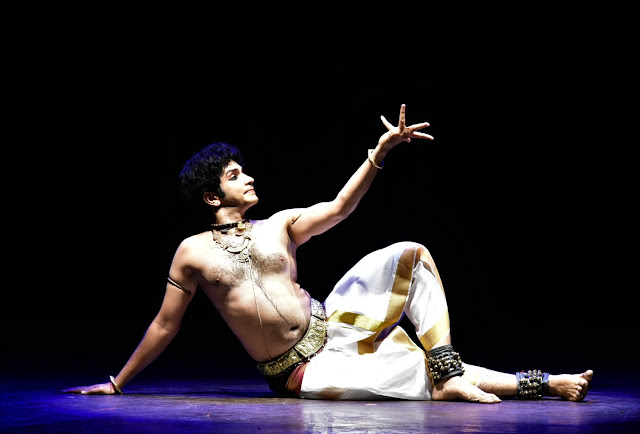 Next, Lord Ranganatha is shown as reclining on the Adishesha. The Sheshnaga or the serpent is in the west. The Lord rests his head on his hand, his legs are straight and his feet mark the rising sun in the east. The mountains are behind him in the north and he glances towards the south, towards the throne of Vibhishan. The stance was depicted by the dancer in many ways. The story of the reclining lord was showcased through the kriti of Muthuswami Dikshitar’ Shrirangapura’ Vihara. The tale says that after defeating Ravana, Rama gifts the idol of Lord Vishnu to Vibhishan to bestow protection upon him in his kingdom. The only condition was that wherever the idol is put down, that would be the abode of the Lord. The devas are petrified that the idol of Lord Vishnu will be taken away to Lanka. Vibhishan had to perform his evening puja en route to Lanka and could not put the idol down for his Sandhya aarti. Ganesha then appears as a shepherd and offers to help by holding the idol. But on the sly, Ganesha puts the idol down and by the time Vibhishan hears the tremors and comes back, the Lord had expanded as the reclining form of Shriranganatha. Vibhishan was given the promise that the Lord would constantly look towards his kingdom and protect it. For this piece, Pavitra wore a maroon hip cover. His depiction of the Lord reclining and a lotus held above was very different. The role of Ganesha was essayed very well, and finally, depicting the playing of various instruments and elephants swaying, the lord is worshipped as the ‘pankajaptakula jalanidhi soma vara  pankajamukha pattabhiram Ram’ with Sita and Lakshman as Shesha. 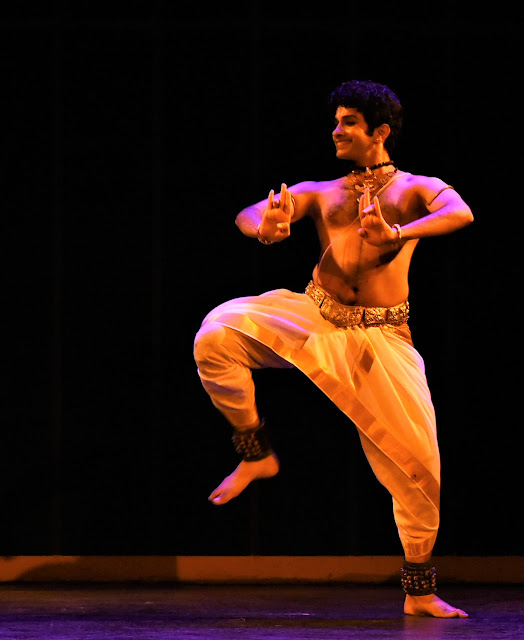 Pavitra’s style has to be appreciated since it has the right balance of everything and the stamina and energy to hold the audience. It’s amazing to see him make a comeback after his devastating accident a couple of years ago. Later, speaking about the production, Pavitra explained, “It is a 90-minute production which was premiered in Mumbai. But here, I have just done the Rangapura Kshetra, which was what was required as per the title of the performance. The compositions are based on ancient Vedic hymns, some by Alvar saints, and the choreography was entirely mine. These have been put to music by Dr. Vasudevan. The performance started with an ode to the river Kaveri, ‘Kaveri darshanam’. On the way, this imaginary devotee is joined by other pilgrims. The devotee thinks that the early morning hours are the best to meet Him, since his Lord would have just woken up. At that time, there is a mild breeze with a fragrance in it. In the early morning light, the birds have started chirping, and the fish have started to swim in the ponds. This can happen only when Mahavishnu opens his eyes in the morning. After that is the dashavatar namavali, which means that on the way, he chants the names of the Lord and meets Garuda. Before you enter the temple, you have to pay your obeisance to Lord Garuda. The devotee then sings praises to Lord Garuda, eulogizing his colour, his looks, his attributes... The sky is his path and the wind his vehicle. He is very ugra or aggressive in protecting the Lord from his enemies with his sharp beak and ferocious eyes. Then the devotee gets permission to go to get a darshan of Ranganatha, who is reclining on his palm. His chest is towards the east but his gaze is towards the south (shesha pointing west, feet pointing east, with the mountains to the north). He says that you rest beautifully on the huge serpent despite its circular movements.
He says that you are the king of Kamadeva too, that is how beautiful you are. Here, I used the trikal jatis to show the bow and arrow. We show a garden of flowers to depict the ambience of Kamadeva’s vihar. Then the composer says that you are the Vrindavan saranga, since the kriti is in Vrindavan saranga raga, and it is Dikshitar practice to indicate the raga used. He is the lord of Vrindavan, and He protected the saranga or elephant  from the crocodile. In the pallavi, I have shown Rama and Vibhishana’s interaction.” 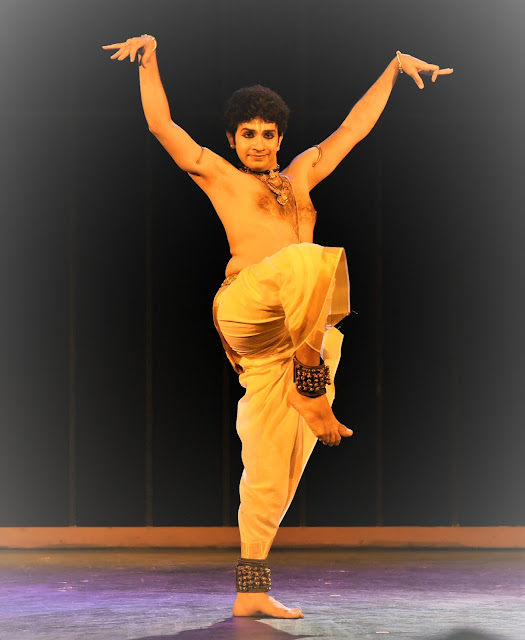 Pavitra had given his inputs for the music, which was by Dr. S. Vasudevan. The nattuvangam and choreography were by Pavitra, vocals by Shrikant Subramanium, mridangam by Haribabu, violin by K.P. Nandini, flute by Shruti Sagar and special effects by D.V. Prasanna Kumar.