Masterclass in navarasa by Raja-Radha Reddy and their disciples

Yamini Reddy, daughter of the famous Kuchipudi duo Radha and Raja Reddy, runs the Hyderabad wing of their dance school, Natya Tarangini. On the occasion of Natya Tarangini, Hyderabad  completing 10 years, a performance was organized at the Kamani auditorium in Delhi. The foyer of Kamani had a huge ceremonial lamp in its centre, with flowers all around. Sadhna Srivastava was the compere for the evening and her confident style of opening the performance was as impressive as always.

The performance was titled Natya Rasanubhuti, and as the name explains, was a presentation of the nine rasas by senior disciples of Natya Tarangini. Bharata Muni calls the nine emotions not only tools of communication, but also methods of connecting to God. The Gayatri stotra and the Guru Stuti were recited. The students of Natya Tarangini Hyderabad presented a nritta piece that was rhythmic and well-coordinated. This was followed by a class-like lesson in rasa by guru Raja Reddy, enlightening the students about rasa, reciting the shloka ‘Yatho hasta tatho drishti’. Raja Reddy explained that natyam, natyakam and natakam all depict different emotions. Bharata wanted shanti, ahimsa and satya. This is what he has propagated through the rasas. 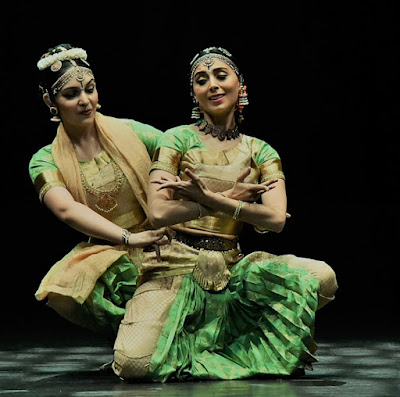 Shringara rasa: This is the madhur rasa. Two dancers wearing complementary green and gold costumes were on the stage. The couple is sukumar or young, ‘rupa yauvan shaleen’, beautiful. They are depicted going to the garden and picking flowers, and there, they see the bee on the flowers, evoking a romantic mood. The two dancers very subtly, with nritya and abhinaya, suggest love using their postures. The execution was very sensitive and lyrical. 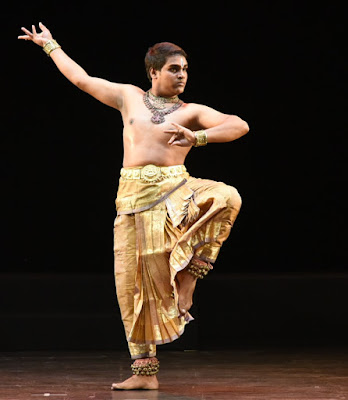 Veer rasa: Next, it was a gradual transformation to dhairya or veer rasa. The nattuvangam by Kaushalyaji was very powerful in the music for this piece. The male dancer, Mahesh, did several leg lifts while depicting bhujabal, gajaveer, yoddha, showing valour, agility and energy. And this valour does not lie in destruction, but in the protection of others, like the valour of a tree. 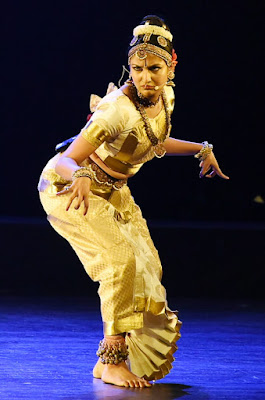 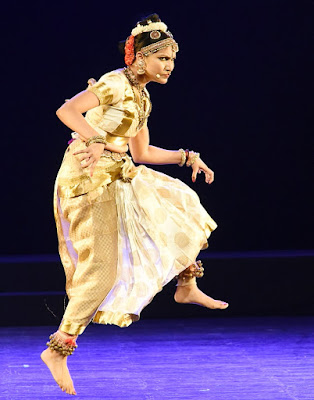 Hasya rasa: The next act, depicting hasya rasa, was done excellently by Bhavana Reddy. Bhavana has a lot of energy and agility in her movements. She generally uses the entire stage and connects with the audience through her abhinaya. Here, she performed an act depicting a naughty monkey, which scratches, frolics, and picks and eats fruits. Hasya, or laughter, lifts your hearts and minds. Her costume was all in gold. Here, she is using vachikam, or reciting her own sollus, to match the mood of the act.

Karuna rasa: The rasa next depicted was karuna. Yamini depicted the rasa with dancers dressed in black and gold costumes. They showed women, children and humanity suffering and dying during pralaya, and Yamini’s character feeling karuna for them. Yamini’s abhinaya is always very seasoned. ‘Every moist heart is a divine abode’ was the concluding line for the act. 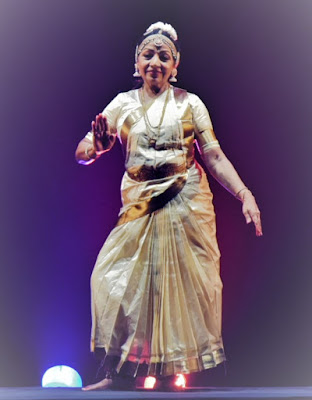 Vichitra rasa: Vichitra rasa (said Sadhna, using a quote selected by Yamini) says, look at everything in life as if you were seeing it for the first time or the last. Time on earth should be filled with glory. This was enacted by Raja and Radha Reddy. 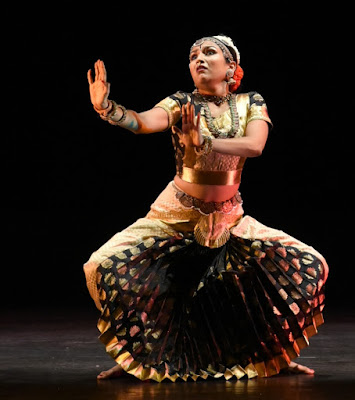 Bhaya rasa: Bhavana appeared in a gold-and-black costume, depicting bhaya. She played the act of being scared of Manmatha and displayed the expressions of a very scared person. 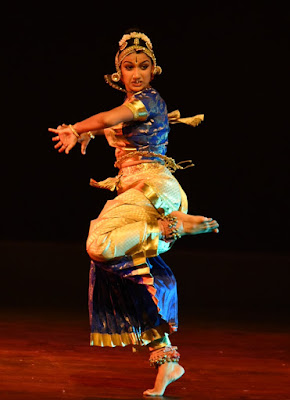 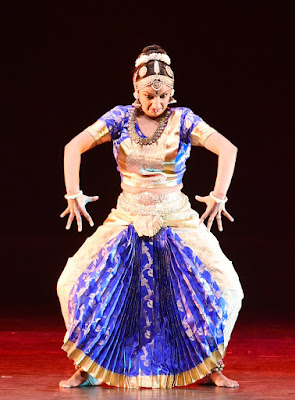 Vibhatsa rasa: Yamini came up next in blue and gold, depicting the vibhatsa rasa. She played Bhima, who tears apart the thighs of Duhshasana and drinks his blood. He pulls out the tissues from his leg and feeds on them too. A gory scene that looked quite disgusting. 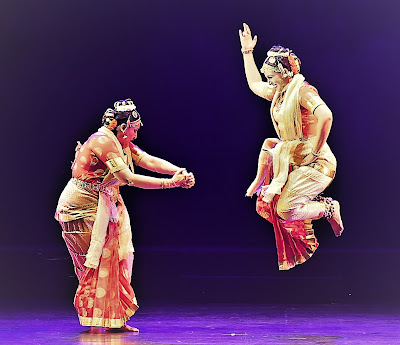 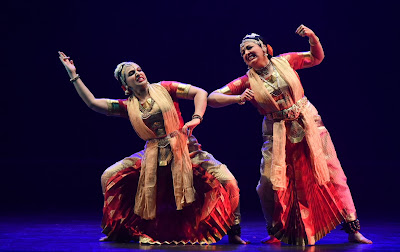 Raudra rasa: And finally, the raudra rasa was depicted through a fight scene — two demons fight to music, which used mimetic sounds of weapons and a red cloak of light. Anger leads to war and conquest, Sandhya said. The dancers had gold and red in their costumes.

Shanta rasa: Raja and Radha Reddy depicted the shanta rasa in white and gold. The key words were ‘ahimsa’, ‘vishwa ekam kutumbakam’ and the Shanti Stotra. All the dancers joined them to show the heavens, skies, earth, plants, animals and people living in harmony. This was followed by Vedic chants which were rhythmic, ending with ‘nrityam vishwa shanti’, ‘sangeet vishwa shanti’ and ‘natyam vishwa shanti’. Raja Reddy explained that rasas that evoke happy feelings, like rati (or shringara), hasya, vichitra and shanti, and those which evoke bad feelings, like raudra, bhaya, shoka and karuna, together form the natya rasanubhuti.

The outstanding features were the costumes, music, choreography and immaculate dancing by all of them. Radha Reddy still amazes the audience with her energy and her passion for the art. Though the topic is a much-visited one and the nine rasas are the bases of all thoughts and emotions in the arts, it was the execution of the concept that was important. Coming from the Reddys, it was quite a wholesome experience, with a lot of effort put into it.

The dancers, apart from Gurus Radha and Raja Reddy, were Yamini, Bhavana, Rashmi and Shloka Vaidialingam, Pernia Qureshi, Mahesh, Ananya, Aparna, Divangana, Noor, Tarini, Avika Basu, Nitya Vaid and Samaya. The orchestra had Lavanya Sundaram and Deevi Ravikanth (vocals), Raghavendra (violin), Kamal Ahmed (sarangi), Anantha Krishna (flute), Bhaskar Rao (mridangam) and Sathish (idiyakka). Sudha Raghuraman was a consultant for the music, the lights were by Sandeep Dutta, and the costumes by Kanhaiya Lal. The nattuvangam by the production’s artistic director, Kaushalya Reddy, was very impressive and quite integral to the concept, with her modifications and rhythm and speed, and also with her tongue-twisting sollus. 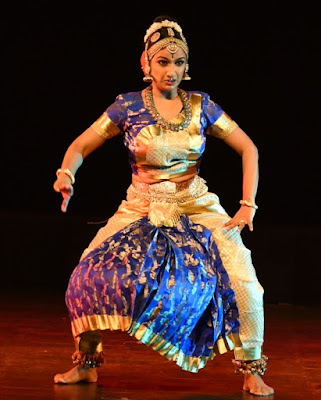 Speaking about the production later, Yamini said, “Dad has been wanting to do navarasa for a long time, and I too was interested in it, but we could not see eye-to-eye. Both of us wanted to do our own thing. Later, we gelled it. Dad wanted to have sahityam added to it, which would give it weight, a gravity, and he has done the choreography. We all put our heads together. I put the philosophical part from Plato, Somerset Maugham, from the Sufis, from Arabic proverbs, to show how much importance they give to the nine rasas even in different religions and cultures. That’s how I gelled my research into the production. I wanted to put the Sufi quote in shringara rasa, because even in Kuchipudi we have rakti and bhakti, which has the same meaning – that the relationship of god and the bhakta is that of the beloved and the lover. In vibhatsa, it was just not disgust but also raudra. In Bhavana’s act for bhayam, it is shown how a young girl is scared of Manmatha, of experiencing love. In adbhuta, there is the element of beauty, where the beauty of a young girl is marvelled at. As for the music, Sudha Raghuraman consulted for us on the ragas, and each of our musicians contributed individually and gave their suggestions. The rhythm was set by Bhaskar Rao and my father, and Kaushalya mummy handled the finishing and interludes the way she envisioned them, so she was managing a lot of it. The costuming had gold as the base, since it’s a neutral colour. Each rasa has a certain colour associated with it. Mom and I worked together on the costumes – I decided the colour and she decided the design. So light green is for shringaram, white for hasyam, grey for karunyam, bright yellow for adbhutam, black for bhayam, a deep yellow for veeram, red for raudram, blue for vibhatsa and white for shantam.”