Krishnamaya: From painting to verse to dance


Bharatnatyam exponent Rama Vaidyanathan recently presented a performance at the Chinmaya Mission in Delhi. Flowers bedecked the entire place and the fragrance filled your heart. Her daughter and disciple Dakshina Vaidyanathan Baghel took the stage, looking stunning in a sari with her very long hair left untied. The performance was called Chitravali - a picture book on Krishnamaya. No art form can exist in isolation. They always influence each other. The ancient miniature paintings of Krishna, which she based her pieces on, have inspired Sanskrit shlokas and poetry, which have then inspired dance. This was a performance revisited by Rama - she had previously performed this in a programme called Parkaya, a few years ago. 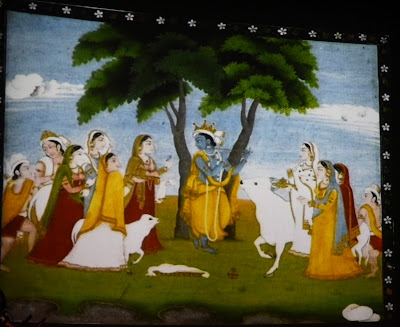 The performance began with a soul-stirring sarangi solo. The first painting depicted Krishna beneath a tree, and the dance piece depicted Krishna as the environmentalist. Trees are very important in our ecosystem. They save us from heat, provide benevolent shade to all, fruits, flowers, fragrance, leaves etc. They should be worshipped and celebrated. The depiction in dance showed a tree. Krishna takes his cows out to graze beneath the tree, which has grown from a seed to a sapling to a plant and finally into a tree. He relaxes underneath the kadamb tree, which provides varsha, pushp, phal and chhaya. The wood is used as chandan or for burning as fuel. The calves look up to the leaves for their food. Krishna lowers the branches for them to graze on. Finally, he herds the cows and takes them back. A very lyrical, aesthetic piece executed by Rama with nritta and nritya. 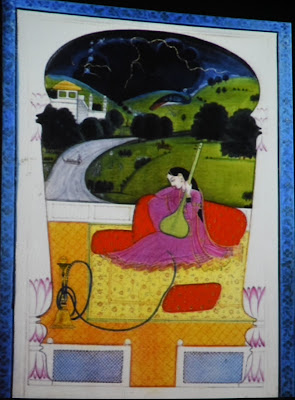 The second painting was of Krishna and Radha beneath rainclouds, and the dance piece depicted abhisarika nayika. The monsoon has set in in full force, and the thunder sounds like the walk of a hundred elephants. The nayika is out in the night to look for her lover - ‘umad ghumad badariya chhayi, shyam ki chhavi virahan mein aayi’. Rama portrayed an elephant’s walk, ears and trunk to depict the thunder. The rain starts as drops and then steadily increases to a downpour. ‘Ghanshyam bina shobhit nahi’ - the lotus blooms in the ponds, the peacocks dance as they watch the clouds. The peacock dance by Rama was done with very gentle and firm strokes and movements. As the dark night sets in, ‘ghanaghor ratiyan’, the nayika leaves, covering herself in an odhni. Her dress gets stuck in the fronds of the bushes. She wades through water crawling with snakes. Wild animals are prowling in the wild weather. She is reminded of her lover as she sees the birds mating, however. The poetry and the verses are delicate and require execution with very evocative, lyrical movements. Rama always handles such pieces in nritta and abhinaya with the greatest technique, ease, grace and rhythmic movements. 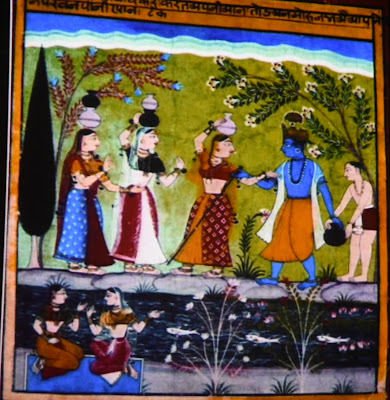 The third painting had a slightly comic theme, and the dance piece was based on Krishna the friend. It showed one of Radha’s friends and one of Krishna’s friends fighting. Radha’s sakhi says that Krishna is dark and not suitable for Radha - ‘Kanhaiya kara kaise byahun Radha’ - while Krishna’s sakha counts his positive attributes. Radha is fair and beautiful, so the dark Krishna does not deserve her, say her sakhi. The other says that Krishna is the protector of Brajabhoomi. He is the Braj ujiyaro, and so what if he steals the butter? Keep Radha to yourself and Krishna will stay a bachelor, he says. At that, the sakhi reconsiders and concedes that Krishna is best for Radha. Again an abhinaya piece, with Rama essaying the act of both the derisive sakhi and the outraged sakha. 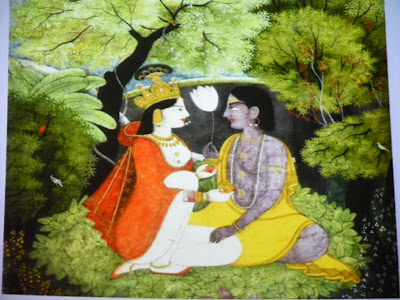 The fourth painting and depiction too were very endearing, but this time, the dance piece was very sensuous. The painting showed Radha and Krishna dressed in each other’s clothes in a secluded grove of trees. It had been done before in Parkaya, where the appeal was more of eroticism, but this time, the execution made it look more spiritual. Krishna and Radha alone in the dark woods exchange their ornaments and clothes, each to each, and submerge themselves in each other’s soul, so much so that they forget who is who. Rama, essaying both Radha and Krishna, depicted the exchange of their ornaments in slow, lyrical, trance-like movements – earrings, bangles, necklace, hair ornaments and then the morpankha, mukut, kundal, gunjamal, bansuri, and finally the pitambar. The crux is the phrase that says ‘you me and me you’ - ‘Radha dhrit Krishna, Krishna dhrit Radha’. Radha wears the pitambar and Krishna the sari. Radha plays the flute and Krishna holds the pallu. The dancing required a lot of sensuous abhinaya and slow movements, and the act of exchange was beautifully rendered by Rama. An engrossing act. 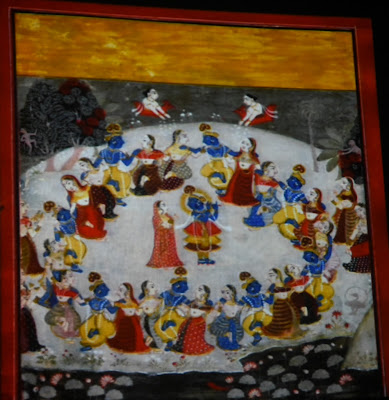 The final painting was of Natvar Krishna on the full moon night of raas leela. Maharaas was staged on the banks of Yamuna in Vrindavan, where in nature’s lap, Radha and Krishna dance with the gopis. ‘Vridavan mein raas rachayo’ was the composition. The mridangam is playing, and the nupur make a tinkling sound. Rama’s nritta captured the energy, pace, rhythm and ecstacy of the piece. All of creation - humans, animals, plants - all are soaked in this rasa and become Krishnamaya. The choreography, script and performance were by Rama, with resource assistance by Dr Harsha Dehejia. The music composition was by Rajat Prasanna and Suhail Yusuf Khan, with moving vocals by Raita De, tabla by Shariq Mustafa, mridangam by Sannidhi Vaidyanathan, sarangi by Ghulam Ali, flute by Rohit Prasanna and lights by Sushant Jadhav, with technical assistance by Shubhamani Chandrashekar.