The relief of dance to end a chaotic evening 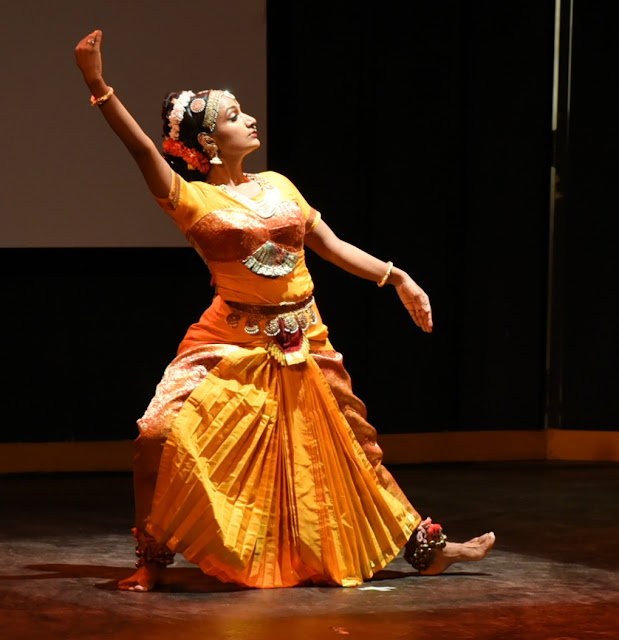 This performance by Yamini Reddy felt like a repeat of the events of another performance at IHC some 9 months ago, where entry was stopped even before 7pm, the official time of the performance. Then began a battle between the organisers, those from the HCL Concerts in this case, and the people waiting to gain entry. It became a battle of words and slurs - either the organisers should not send out so many invitations for a free performance, or they should have an alternative arrangement to accommodate the excess numbers that reach the venue. Since I was among those who was standing outside for the first part of the performance, I saw it from the point when Yamini was doing a Ram vandana, 'Bhajaman Rama charan sukhadai'. 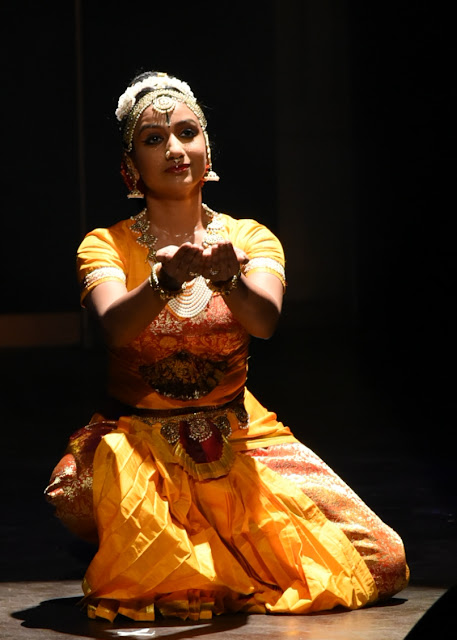 The conversation with Yamini explained the entire performance. She said that the concept of the performance was storytelling. She said that Kuchipudi has a unique feature – that it mixes theatre and dance. “The first piece was Dashavataram, which talks about the incarnations of Lord Vishnu, and a short story associated with them. The stories also reflect on the evolution of man, where the depiction shows evolution from a creature in the water to an amphibious one, to primitive man and then civilized man. 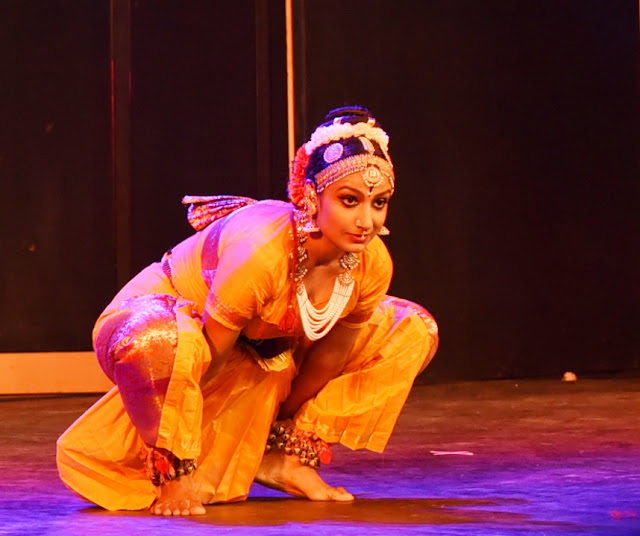 The second piece, 'Bhajaman Rama charan sukhadai', showed short episodes about Rama's life from the Ramayana. The final piece was Gajendra moksha from the Bhagvatam,” said Yamini. “I have stuck totally to Kuchipudi, since it is more lokadharmi and one can incorporate more natural movements in abhinaya. Here again, I introduce the element of vachika abhinaya, with my father narrating the story. It has daravus from the Ramayana, so we did the dialogues. My father would explain the piece, and then two dancers would come and stage an explanation. The enactment by the dancers in the beginning was a visual explanation of the piece to be performed.” 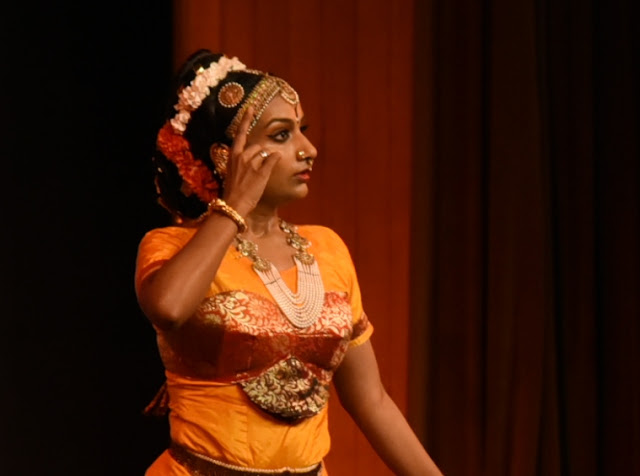 'Bhajaman Rama charan sukhadai' is a composition by Tulsidas, where the bhakta prays at the feet of the Lord, singing odes to the mahima of his feet, or the bhakti of his feet. The Ganga originated from his feet, depicted by the reclining pose of Vishnu, and it came and settled on the locks of Lord Shankara. Brother Bharat asked for the paduka of these feet, and got Ramabhakti. Khevat washed these feet and took the Lord across the river. The Lord offered him his ring, but he refused and asked to be taken across this material world – ‘tum aaye hum par utaare, hum aaye tum paar utaro’. The Lord roamed the forests of Dandakvan with these feet, and blessed the rishis. 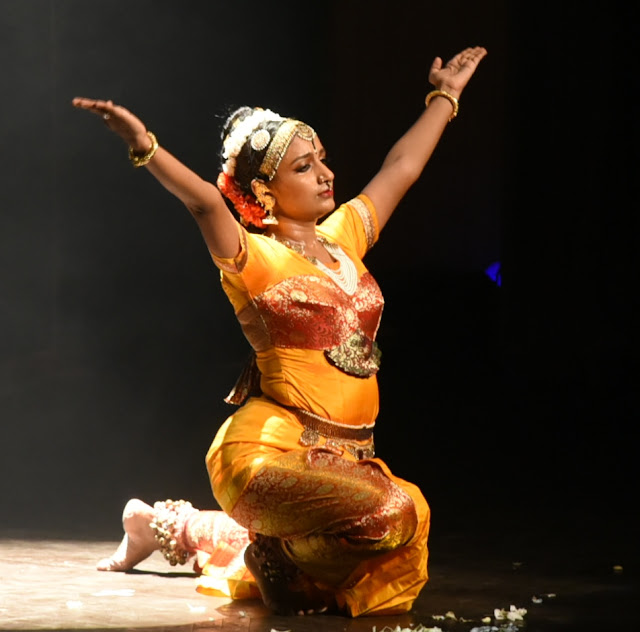 Sugriv, who was afraid of his older brother Bali, took the aegis of these feet. Ahalya was lying in the ground as a stone, waiting for Rama to come and step on her so that she could come to life. She worships his feet and leaves for her heavenly abode. Vibhishana left Lanka and asked for the sharanagati of these feet. He won the kingdom of Lanka when Ravana was vanquished. So Tulsidas pleads with the Lord to keep him in the vicinity of these feet. Yamini, as always, is very confident with her technique, excellent with her nritta and abhinaya. There was a natya element to the performance, and in this aspect, Yamini’s performance had a lot to offer – it was a very articulately done piece. 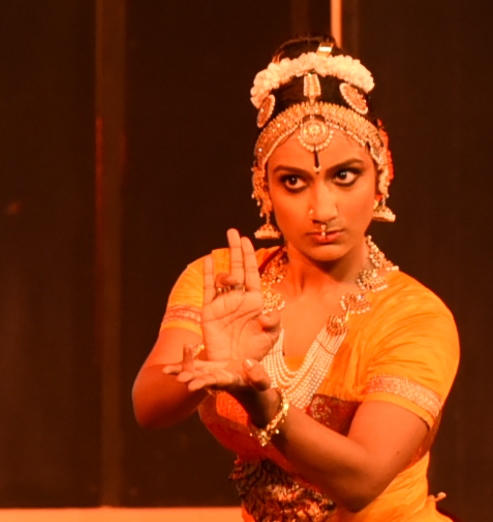 The final performance was from a story from the Bhagvatam – Gajendra goes to drink water from a river, and the crocodile bites his foot and gets hold of the elephant, dragging it into the river. The elephant prays to Lord Vishnu to save him. The Lord comes to his rescue and kills the crocodile with his chakra. The freed elephant walks gratefully into the forest. As Raja Reddy explained, the rasa that is evoked by Kuchipudi dance is natyadharmi and lokadharmi. There is the sahitya, the swara and the jathi. Yamini portrayed the elephant, with its ears flapping, and the crocodile with hopping movements, to staccato music that went ‘naka naka naka naka naka’. 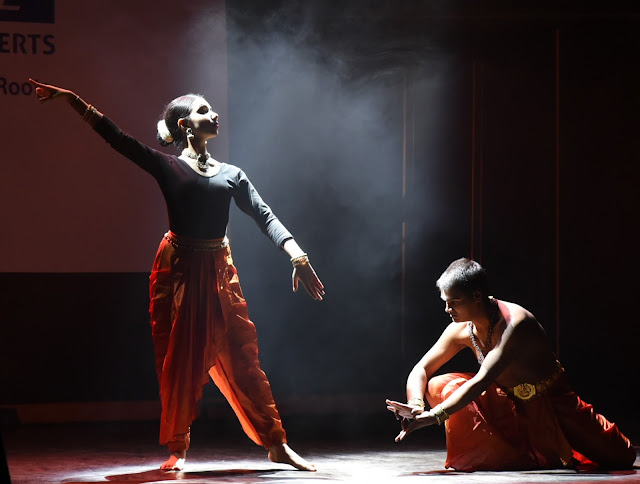 Finally, Krishna or Balagopal is depicted with lotus eyes – ‘Radha mukha madhukar’. The nritya and nritta, with footwork, to rhythmic sounds and jathis, was executed again with a lot of perfection. And finally, there was the impressive plate dance performed by Yamini with a lot of stamina, ease and pace, to end the performance.
Pics: Anoop Arora