Debadhara: a divine stream of dance


The annual Debadhara Festival was held at the IHC in Delhi on the 18th of May. The foyer of the auditorium was decorated with a flower rangoli and pictures of the legendary Guru Debaprasad Das. The organization is a pioneering one that upholds the tradition of the late Odissi guru, imbibing elements from the tribal, folk and classical dance forms of Odisha.
The first performance of the evening was by Guru Aruna Mohanty. She has been trained under Guru Kelucharan Mohapatra, Smt Sanjukta Panigrahi and Smt Sonal Mansingh. She has been awarded the state and central Sangeet Natak Akademi Award, and the Padma Shri by the President. She has travelled all over the globe and presented her choreographies to audiences worldwide. 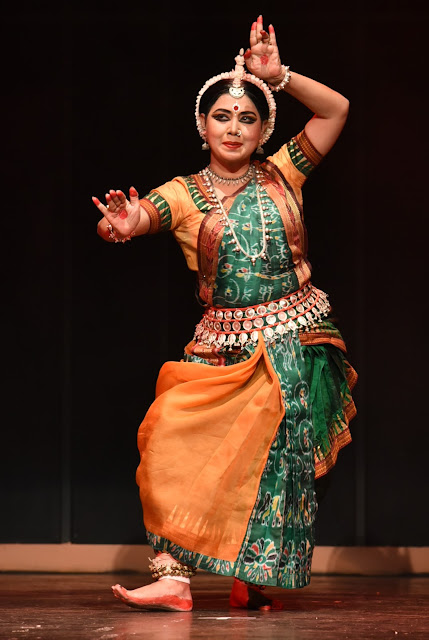 The first choreography she presented for the evening was Bhumisuta. The story is that of Sita, who is the daughter of the soil. The story was told in the first person – she is the “rajanandani, Janaki; I remember my birth from the sacred soil, my marriage to Lord Rama, my unconditional devotion to my husband, humiliation after the abduction by Ravana, and my husband questioning my purity. I am a disgraced woman. So Mother Earth, take me back.” The composition was in raag Mallika, taal Mallika. The depiction of the story of Sita by Aruna Mohanty was crisp and very relevant. Sita was born from the soil after a yagya. She was shown as lifting the Shivadhanush as a young girl, so during the swayamvar, she is married to Lord Rama, who is the only prince to break the dhanush. But soon, Rama, Lakshman and Sita are sent into exile for 14 years, and spend their lives as vanavasis. Here again, Arunaji shows how Sita is content in that life – ‘nath sakal sukh saath tumhare’. As she enjoys the beauty of the forest, she sees the golden deer, and as Rama runs to catch it, Ravana abducts her. What follows is her stay in Ravana’s Lanka, and then, a war between Rama and Ravana to win her back. Here again, Sita has to go through the agnipariksha to come back. Rama hears a man in Ayodhya gossiping about her, and again she’s sent into exile, notwithstanding the fact that she is pregnant. Here, she raises her two children, and now, when the pain is overpowering, she asks Mother Earth to take her back. The depiction was in the style of ekaharyam, where one dancer depicts all the characters. Arunaji did this with a lot of versatility, using emotions and abhinaya and nritta. She was able to bring out the pain and humiliation of Sita with great sensitivity. Her expertise as a storyteller through dance was exhibited in this piece. 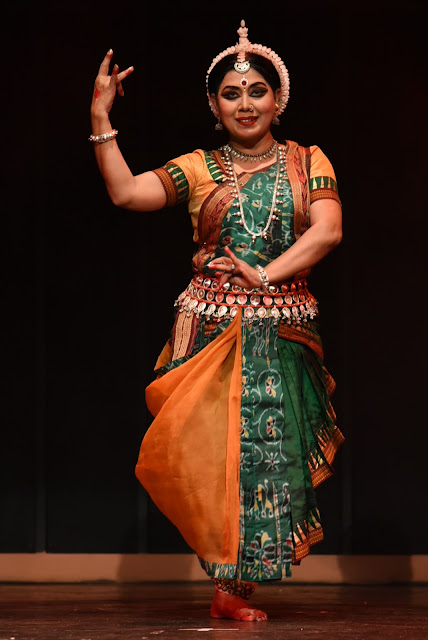 The second piece was about the cycle of birth and death. Everything is ever-changing, and nothing is permanent. The only way to liberate oneself from this cycle is to align oneself with the ultimate. This cycle cannot be stopped. Life is as fragile as a droplet of water on the tip of a leaf, which might slip off any moment. Again, Arunaji told the story of life through her abhinaya. After birth, a child becomes a teenager, and then an adult, kumar or yuvak. Youth finds oneself indulging one’s own ego, and one has the strength to waste one’s life gambling and drinking. Adulthood is lost indulging one’s senses. Love is physical, and it is only in old age that one realizes that the time lost is gone forever. Dehi asmin yatha dehe. Arunaji ended with a bhajan – ‘Bhaja govindam moodhamati’ – evoking the five chakras of the body. The world is like a marsh, and it is only lives that are like lotus that go untouched. The concept was very aesthetically presented, and the prowess of Arunaji was visible in her abhinaya and technique, though the piece seemed a little slow.

It was my very fervent desire to see Guru Vyjayanthi Kashi perform, and the moment she came on stage, it was like a vision that had come true. She had a very graceful presence on the stage. Guru Vyjayanthi Kashi is a renowned Kuchipudi dancer. She has been trained in Kuchipudi, Bharatnatyam and various temple dances from a very tender age by the late Guru C.R. Acharya, the late Vedantham Prahalada Sarma, Padmashree Vedantham Satyanarayana Sharma, Bharathakala Prapoorarna, Korada Narasimha Rao and others. She was performing with her daughter and disciple Prateeksha Kashi that evening. She has performed many group and solo pieces, and featured in national and international festivals. Vyjayanthi Kashi is a choreographer, teacher, researcher and organizer. She is recipient of awards like the Sangeet Natak Akademy Puraskar, Karnataka Rajyothsav Award and the Vocational Excellence Award from Rotary International, among others. Prateeksha too has performed in many prestigious festivals, and she is an empanelled dancer of the ICCR. She has been awarded the Ustad Bimillah Khan Yuva Puraskar in 2014.

The piece was called Chitralohita, which was a theatrical presentation showing all the emotions of the human mind using the theme of the colour red. “I really feel that it’s been a century that we have been doing the same things. Two years ago, I was asked by the NCPA to do something on colours, and I chose the colour red since I thought I could use the theatrical elements of Kuchipudi and its creativity to do something on this colour. So first, what comes to the mind is the bindu on the forehead of a woman, or the vermilion on her head. It is not just for beauty – it is symbolic, since it is on the wisdom eye. The wisdom eye is the seat of all gyana. Then I thought of the lotus, blood, the rising sun, and I thought I would use the Ramayana and Bhagvatam to depict these theatrical tales. The first thought that came to me was that of Hanuman, which is a beautiful story. For the mother who is familiar with her son’s mannerisms, there are two emotions that come to her – adbhuta, and the other is hasya. In the story of Prahlad, I did not show Narasimha, it’s only Hiranyakashyap – when he sees Narasimha, he senses his death coming. In the Bhagvatam, it is described in great detail, and with that fear, his eyes become red. The rasa is bhayam. I chose shringara rasa for Radha and Krishna. Vibhatsa was chosen for Bhima, where you feel that however bad the circumstances, how could be gulp down blood? The pancha Pandava, in the Mahabharata, have been with Krishna, and Draupadi is an agnikanya, born of fire. But Bhima still drinks that red blood and Draupadi finds her solace when he smears her hair with the blood of Duhshasana,” said Vyjayanthi Kashi. The narration of the tales was in the first person, with the red colour telling the story of these mythological tales. “A choreography is an inward journey, then I give to the scriptwriter, and then we come to the musicians. And the final thing is the dance and the music.” 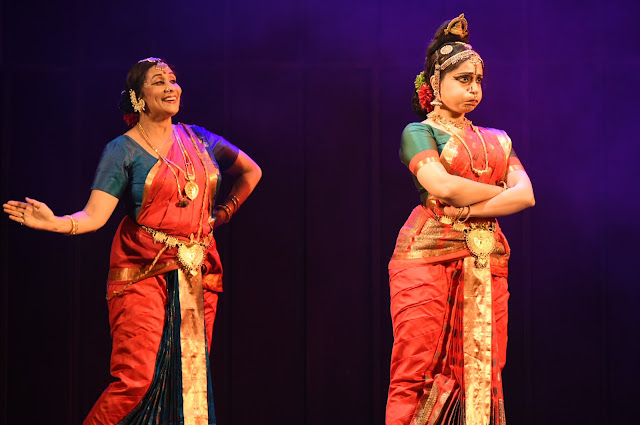 The first story depicted was that of Hanuman – briefly, Lord Hanuman, as a naughty child, swallows the sun, and the whole world comes to a standstill. Indra, in order to get the sun out of his mouth, inflicts a wound on his cheek to liberate the sun. When Hanuman comes to his mother with swollen red cheeks, she washes them and laughs at their appearance. Here, the red colour then says that I was the cause of Anjani’s endless laughter at seeing her naughty son’s face. I am the red blood coursing through the cut in his face, the very red heart that he tore open to show his bhakti for Rama and Sita, invoking adbhuta rasa. Here, Vyjayanthi Kashi was Anjani and Prateeksha portrayed Hanuman; the portrayal by Prateeksha and the stances she took, particularly that of Hanuman with swollen cheeks as he swallows the sun, was done with a lot of excellent abhinaya. Prateeksha looked every bit the role of Hanuman. 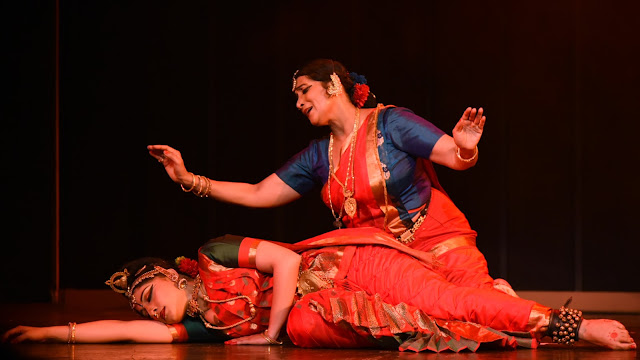 The second story is that of Jatayu. We know that when Ravana abducted Sita from the woods, it was Jatayu who came to her rescue and fought valiantly with Ravana till the end. Here, the colour says, I am the same red blood that flows through Jatayu. Ravana cut off Jatayu’s wing and the green earth was stained with red. It is the colour of compassion and Jatayu’s empathy. Here, Sita was enacted by Vyjayanthi Kashi and Prateeksha did the role of Jatayu. Prateeksha’s immaculate stances of flying and as Jatayu challenging Ravana in the air were executed well. The fight scene had rhythmic jathis to portray the violence and chaos of battle. In the end, Jatayu dies on the ground with his wing chopped and bleeding, and it is often said that Jatayu met the end befitting of Raja Dashrath. 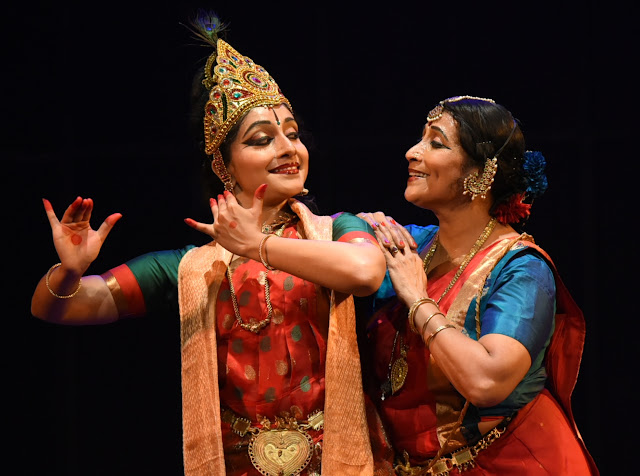 Radha is the embodiment of beauty. The colour of the rose in Radha’s cheeks that Krishna kisses, the colour of her red lips, the bindu on her forehead, the symbol of impassioned love, is all red. In this piece, Radha was portrayed by Vyjayanthi Kashi, and Krishna by Prateeksha. Radha is sitting and drawing images in the kunj when Krishna appears. In an impassioned moment, very sensuously portrayed, they marry – they exchange garlands – and he puts sindoor on her forehead. The red on her  arun adhar,the cheeks  the alta adorning her feet, are the love of her beloved. The rasaraj shringara is brought out in this leela with Krishna and Radha.


The next episode is from the Mahabharata, when Bheema tears Duhshasan open and drinks his blood. This blood he also carries to Draupadi so she can smear her hair with it, the same tresses that Duhshasana had pulled her by while bringing her to the court to disgrace her. Draupadi opens and smears her hair, and with the fulfilment of her revenge, she finds peace. Draupadi was enacted by Vyjayanthi and Bheema by Prateeksha. This piece had some gripping abhinaya by the duo. The moment to be remembered was the anointing of blood on Draupadi’s hair. The rasa depicted were vibhatsa and shanti. The dance had beautiful moments of footwork and nritta, but the two mainly exploited the elements of abhinaya in their performance.

And finally, Guru Gajendra Panda and his disciples performed a tale about Sakshi Gopal in odissi.