Bringing the divine alive through Bharatnatyam


The smell of flowers always refreshes your senses. Chinmaya Mission was bedecked with flower rangolis for the opening of the Divinity series that started in Delhi on Friday, 27th September ’13. The Divinity Series is an attempt to present glimpses of India‘s cultural heritage. The organizers launched the series with a festival of Bharatnatyam. 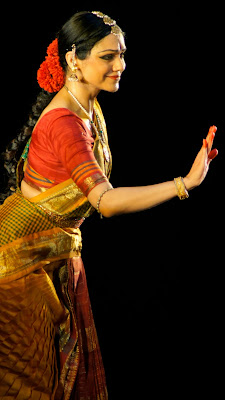 Rama Vaidyanathan is a well-known exponent of Bharatnatyam. She has been trained by the legendary dancer Yamini Krishnamurty. Rama has also been trained under the guidance of eminent guru Saroja Vaidyanathan. She has been featured at all major dance venues in India and abroad. She has been awarded several prestigious awards like the National Excellence Award in Delhi and the Great Indian Women Achievers Award in Mumbai. 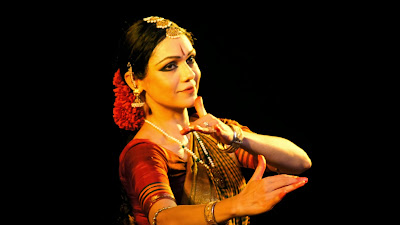 In a short chat after the performance, Rama said, “It is wonderful to be invited by the ‘Divinity’ series, since it is a festival dedicated to Bharatnatyam. This time, it is a younger audience that has been targeted and there is an expansion of their horizons. The concept of the dance is also wonderful since it unites the divine with dance.”  When asked about the expressional beauty of the pieces she had performed, she said, “I took two pieces – one with a happy, playful and naughty abhinaya and the other with very serious issues requiring a different type of abhinaya. The emotions lent to the piece and I got the scope to portray different kinds of emotions.”

The evening began with singing by the choir of Gandharva Mahavidyalaya which I could just get a glimpse of. Rama began her performance with an invocation or Anjali. Next she performed the Mayur allarippu in Misra Jati on request by the organizers. The composition was in tala cycle of five and half beats composed by Karaikudi Sivakumar. She tried to capture the movements of a peacock. When the clouds appear, the peacock looks at them, spreads its feathers and dances. This dance of joy has been done in varied genres of dance, but Rama’s movements were almost the best that I have seen. The flitting eye movements, the jerks of the head, neck and shoulders, the leg stretches – all were mesmerizing. 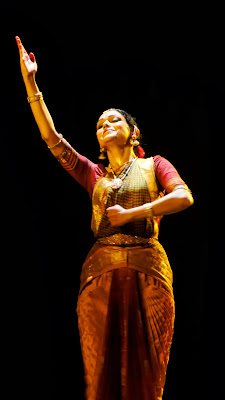 The following piece, the main piece of the evening, was a kirtanam composed by Swati Tirunal. It was performed to commemorate him in his bi-centenary year. The composition was in Ashtaragamalika. It was in eight parts. The heroine conveys her unabashed love for Lord Padmanabha through this piece. She expresses her love in eight lines.
A.      She addresses the Lord as the one who reclines on the serpent – Pannagendrashayanam, Shri Padmanath. Rama depicted the reclining posture of the Lord and the serpent as His seat.
B.      O lotus-eyed Lord, the cold breeze is blowing and it makes me think of you. Please do not be indifferent to me. O Lord, with teeth like jasmine buds – Manda marutopi mama manasam vivasyati.
C.      Birds are chirping, and the cooing of the cuckoo distresses me – Kokila koojita. Rama showed the cuckoo chirping and coming nearer till the heroine shuts her ears.
D.      My friends are taunting me – Hasitam. Your beauty exceeds that of Cupid.
E.       The union at night is sweet and I derive respite from those memories – Yaminin samveseshu.
F.       Your lips resemble red bimba fruit – Bimba sadrusha. Rama’s interpretation showed the Lord’s lips like a flower on which the bhanwara circles. The Lord is adorned in golden attire and garlands.
G.     Embrace me in your arms – Devdev kripayami. Rama depicted a tight embrace around the heroine.
H.      I am enchanted by your elephant-like gait. It was beautiful to see Rama depicting the gait of the elephant. The heroine wonders whether she has love or devotion for Him, while prostrating at His feet.
Rama showed some meticulous abhinaya and technique while keeping up with the expressiveness of the composition. 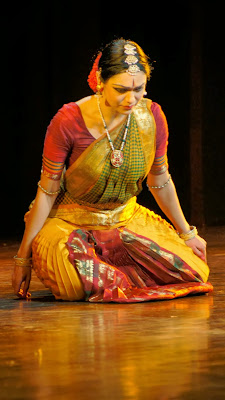 The fourth piece was a lovely playful one in raga Kalyani, aditalam. The sakhi pleads with Krishna not to play his flute and create a ruckus at night. She pleads repeatedly with him to stop, since people who are sleeping will be awakened and they shall gossip. She reprimands him to pull her hand since her bangles will jingle and make a noise. She further admonishes him not to pull her sari since her necklaces will make a noise. She requests him that it is time for her prayers and reading scriptures so she doesn’t want to be disturbed. Finally, when nothing works, she snatches the flute from his hand and runs away. In the execution of the abhinaya, Rama showed a lot of attitude, playfulness in her gait, her impatience with Krishna, her expressions and rolling eyes – all made the performance enjoyable. The flute by Rajat Prasanna complemented the piece. It was definitely the favourite of the evening. 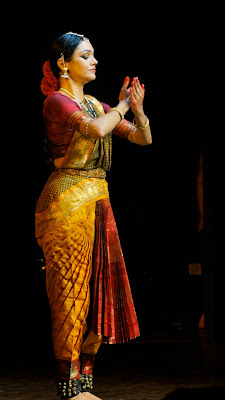 As the evening progressed, she performed to a composition by Arunachala Kavirayar where there is depiction of conversation between Sita and Ram, when he tells her that he is leaving for the forest for an exile of fourteen years. The composition was in Raga Husseni, Mishra chaputalam. While depicting the scene, Rama enacted Sita who is dressing up in her chambers with her maids. She is tying up her hair, wearing kajal and finally her crown, when there is knocking on the door. Ram is welcomed in and he breaks the news to her. She is hit hard by the news. Rama exhibited her distress, shock and anguish. She shakes him and asks him, does he remember the time he broke the mighty bow of Shiva and married her? Has he forgotten the vows? Is he like the bird that abandons its spouse? She questions him, how can she sleep on her bed while he sleeps on a straw bed, stay in the palace with her maids while he roams the forest, eat the rich food, while he picks the wild fruits and eats frugally? The earth will not be able to bear her sorrow if he leaves her. Does he wish to be worshipped and placed on a high pedestal for being an obedient son? Her words have the desired effect on Ram, who agrees to take her with him. She readily removes her ornaments and accompanies him. 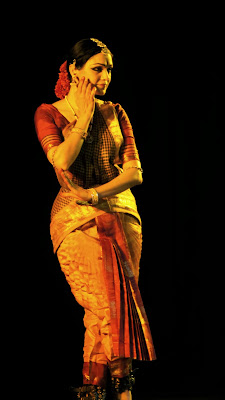 Rama concludes with ‘Shivoham’ – verses from the Skandha Purana. ‘Jeeva Shivaha, Shivo Jeevaha’.There is Shiva in all living forms and all life is Shiva. Rama depicted Lord Shiva as the nataraj, Ganga flowing from his tresses, the ox as his steed and snake entwined around his neck. Her dance movements depicting the damroo in one hand and fire in the other, jumping with her legs apart, were awe-inspiring. Her stamina did not wane till the end. Technique, expressions, footwork, leaps and hastas were all immaculately executed. Accompanying her were Shiv Kumar on the natuvangam, K Venkateshwaran on vocals and Lalgudi R Shriganesh on mridangam. The flute by Rajat Prasanna was very melodious.
Email Post