Earlier this year, in May, the Aditi Mangaldas Dance Company – Drishtikon Dance Company hosted one of their baithaks at the Serendipity Arts Foundation in Delhi. It’s one of Aditi’s many creditable initiatives to give dancers a platform to showcase their talents . This baithak was the story of three journeys, three paths that these dancers took towards becoming and achieving what they wanted to – dancers.


The first was Manoj Sonagra. Manoj is from a Kathak family and has also been exploring contemporary based on Kathak in the Drishtikon repertory. He performed a solo that I have watched earlier, but it was no less powerful this time around. With soft music and minimal light, he lay in a foetal position on the floor, Mohit Gangani gently tapping the tabla. Manoj started to shudder. Later, with footwork, rotating and rolling, he spun fast with his hands open. As the performance went on, Manoj depicted his angst with falls and groans, dancing as if holding something in his hands. Gradually, to the beats of the tabla and alaap by Faraz Ahmed, Manoj did hand movements, trembling, touching his face, and finally, raised his hands in prayer. Ashish Gangani joined in with the pakhawaj. Manoj danced in Kathak tatkaar, moving in different directions, and finally, fell, slithered backwards and drew patterns on the floor with a pen as he did so. It is a journey with no end and no beginning. It’s a process. 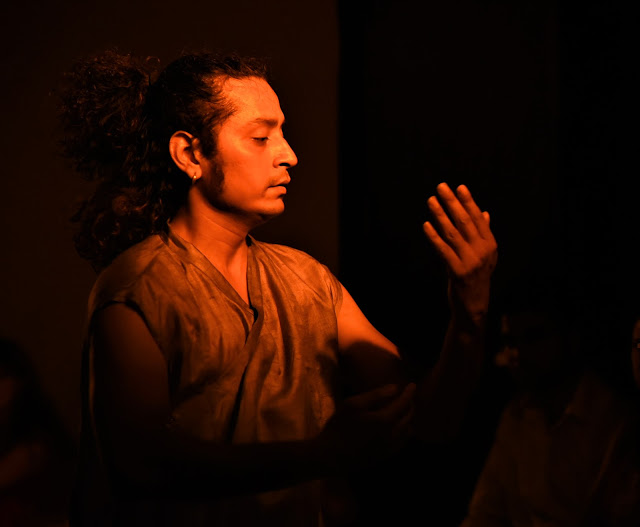 Manoj appears to be a shy person and his initial efforts at being a contemporary dancer were not supported by his family. The pain, angst, rebellion and caution are still within him on this journey. He still looks for inner peace with his destiny. He has honed his skills in contemporary based on Kathak under the guidance of Aditi. Gaurav S.S. Bhatti, speaking for Manoj, said, “He is shy and he doesn’t say much, but when he talks about dance during his production, he talks a lot. It is not really about pain and distress, but actually about things that are not usually talked about. He comes from a village, from a conservative family steeped in Kathak tradition. The burden and responsibility were already there on him in his mother’s womb. Since he is the eldest son, he already feels the burden. He is doing what he likes and yet, the frustration that he cannot show it to his family and talk about it to them is there in his subconscious. He had learnt Kathak and now, working with Aditi didi, he has discovered his style.” 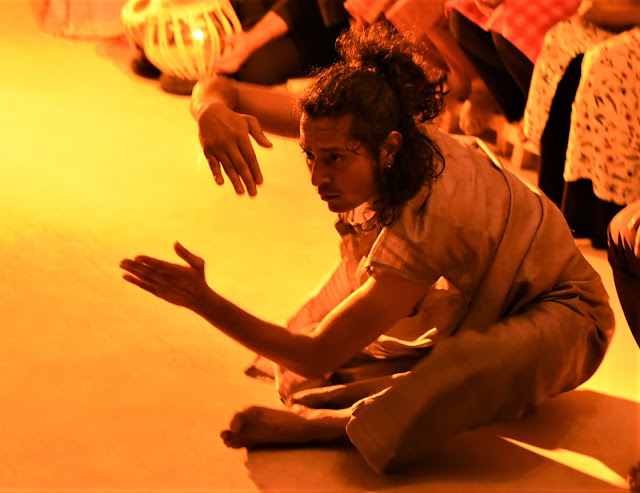 In the end, Manoj mumbled in Rajasthani, uttering a few words, that the determination to come out of it is in him. So it is still a piece in progress. About the marks on the floor, Gaurav said, “They are marks of the stigma that he still bears.”Manoj has a great potential as a dancer both in kathak and contemporary .

The second performance was by Kathak dancers Diksha Tripathi and Tripti Gupta, also members of the Drishtikon repertory. This was a very well-conceptualized piece, not fiction but based on reality.


The two dancers began dressed in grey costumes, circling each other with twisting feet, with their ghungroos lying in the centre on the floor. They kept changing their footwork as they walked around, together or alternating. One moving around reading, exploring, emoting, smiling or just looking in the mirror. And yet her attention and hands keep getting pulled towards the ghungroos. The other dancer depicted pain, happiness, shifting between emotions, and she too gets attracted to the ghungroos. The two dancers keep moving towards the centre and sit down as they talk to the audience, their hands involuntarily moving backwards towards the ghungroos. The piece showed each one having a different journey and yet involuntarily and inevitably, moving towards their destiny. 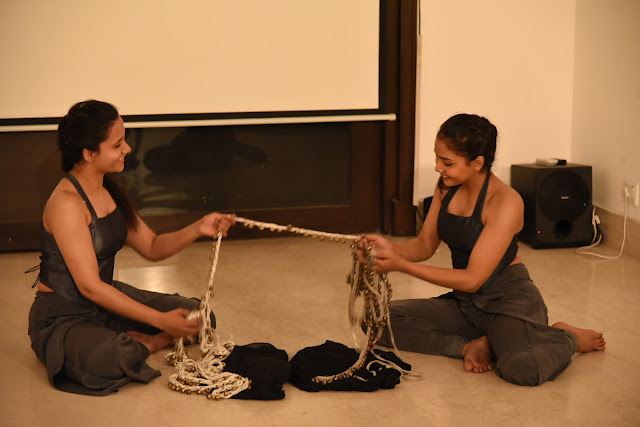 As they sit down and tie their ghungroos, they converse with each other. One expresses her struggle to become to dancer despite the opposition of her parents, who wanted her to become a doctor. The other narrates how she was at liberty to choose her career, yet could not make up her mind about what to do. Finally, dance was her choice. As they say, “Dance karna hi hamari zindagi ka sukoon hai.” With their happiness or troubles, as life goes on, dance and ghungroos do not stop. “Yahi sadhna hai,” they recited. They then donned black capes and earings as they said, “Yehi tihai tode hi hamari life hain.” 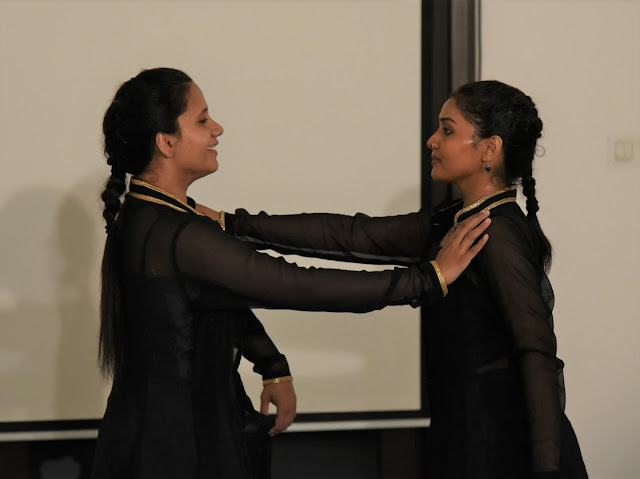 They started with footwork as Faraz took an alaap and then sang the composition ‘Pag ghungroo baandh chalo sakhi’. The two showed gat, tihai, toda, parans, thaat, ending with footwork and the gentle shaking of the ghungroos. The two had great control over their technique, their hands and feet moving proficiently. ‘Dor judi man ghungroo saun’ was their final statement, showing their connection with their dance. This piece featured the three musicians plus Dheerendra Tiwari on padhant.