For 2000 years, we have been doing these movements, but we do not know they are described in our shastras: Dr. Roshan Datye

Last year, I attended Nritya Samanvaya, a multi-dance form presentation by Dr. Roshan Datye in which she displayed the threads of similarity running between the various classical dance forms. That day, she used Kathak, Bharatnatyam and Odissi. The common thread, she said, was the Natya Shastra, the movements and principles prescribed in it. The ancient text underlies the technicalities of most classical dance forms even today.


I found these connections fascinating and had taken Dr. Datye aside for a short conversation afterwards. I have been trying to put up the reports of many long-pending events for many months now so I had held on to it, but here it is.

Q: You have presented the nritta element of dance today. The nritya element has its basis in various sahitya, but what is the basis of nritta?

RD: The movements in the Natya Shastra have been prescribed equally for drama and dance. You can use them in whichever form you wish to as per your requirements. It is not mandatory to use them only in technical dance, you can use them for any kind of dance or theatre. They can be used for natyarupantar also. The plays in the Pauranic period used chaaris for natyarupantar. In the Natya Shastra, it has been said that chaaris can be used in nritya and natya in all forms of classical dance. We have been doing it since ancient times, it is just that we don’t realize it. They have been used since times immemorial, of course with small changes, according to the parampara. But what I have presented today and in my work in general is after reading the vyakhya (definition).
In the Natya Shastra, the chaaris are described in a shloka, but I have translated it into a chhand in Hindi. It’s not an exact translation, but that chhand it does not translate the kriya, it explains it. What (Birju) Maharaj ji has elaborated in Ang Kavya about urdhva hasta, madhya hasta etc. is also known as rechit. The utpatti stance by Maharaj ji is known as chatusra hasta in the Natya Shastra. Maharaj ji calls it utpatti because that is where you start. I have written about only 30-40 such mudras in my book, a few chaaris and hastaks. That means for 2000 years, we have been following this. In my book, I have elaborated on the description in the Natya Shastra and what Maharaj ji is calling it now. We do the movements still, but we do not know that they are described in our shastras.
Kathak as it is has not been connected well enough with the shastras yet. If you speak of chakkars (which are such a defining feature of Kathak) – there are 9 chakkars in the Natya Shastra, we do 5-6 of those every day anyway. Didi (Datye’s guru Rohini Bhate) had us do 4-5 every day. If you move the hands, it is a hastak, if you move the legs, it is a chaari, and if you move both together, then it is a karana. These things (of the Natya Shastra) are in Kathak. My reason for (making with connection with the Natya Shastra for) Kathak specially is that in Kathak, we do a taal prastuti. It is the only form which gives taal a swaroop. A taal is ornamented and given a meaning through bols. I have used a large number of Maharaj ji’s pictures and my guru’s pictures in my book ‘Kathak Adikathak’ because people know and follow Maharaj ji. 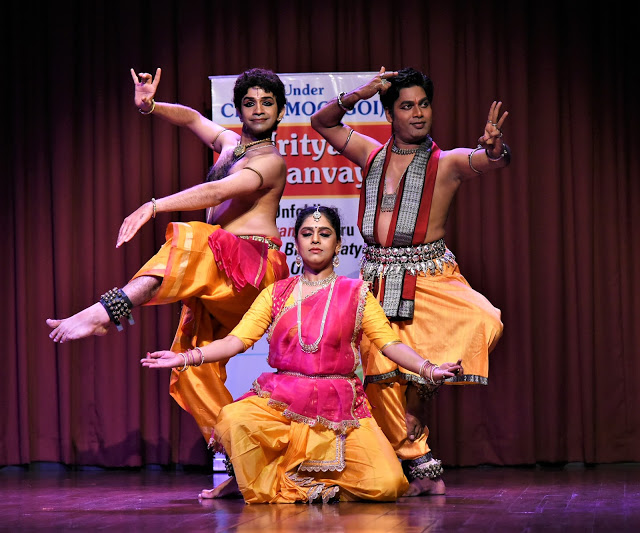 Q: How do you think Bharat Muni identified and formalized the movements – through sculptures?

RD: No. The sculptures came later. I think whatever the dance form at that time, folk, classical or semi-classical, it was there – Amrapali was a dancer at that time. She has been shown as having as holding a branch near a bunch of mangos in Sanchi. That is the prasapit karana mudra. The pure dance movements are not visible in any other shalabhanjikas or yakshkanyas – a hasta there or a foot movement there maybe. But Amrapali was a dancer in isapurva. That dance was there at that time – Bharat Muni must have observed that dance and created the hastas or karanas. These things were collated as the Natya Shastra and in the present times, they are our legacy. In the last shloka, it has been said that if you need anything more, take from the folk arts. That is exactly what Kathak has done.
While reading all this, I had a very clear recollection of my guru. She would say ‘dha ta ka thung ga’ – pull in your stomach and release after ‘dha ta ka’, at ‘thung ga’, exhale. Abhugna, which is pulled inside, and vaksh were taught to me by my guru and it is described exactly as such in the Natya Shastra. So I felt the compulsion to explain this. I have danced enough, performing in 20-22 countries, 40-50 cities. It is better to pass on the knowledge to the younger generation, they will carry on the work.

Q: Do you think that the younger dancers want to explore these depths of movements and forms?

RD: If you teach them, they want to. These children from Kathak Kendra, I took a workshop for 4 days, they still recount it fondly. In Lucknow, I once did a workshop for 8 days. The students did not want to leave me. They would say that this has not been taught to us like that, so please teach us.

Q: The control of the breath is not given weightage by the teachers. Would learning it make the movement better?

RD: Absolutely. It will improve the movement. It will enrich our knowledge of our ancient culture. It will help us appreciate the association and respect out dance forms more.