I have recently put up a report on the three solo performances at Natya Vriksha’s World Dance Day event in Delhi. On the second day of the Young Dancers’ Festival, Natya Vriksha presented a tribute to the late Shri Karaikudi Sivakumar. Karaikudi Sir had been an integral part of Natya Vriksha productions. He was a master nattuvanar and mridangam player who had been integral to dance and music productions for about 35 years. He was from a family of musicians and had learnt from mridangam veteran Karaikudi Krishnamurthy. He had composed jatis and rhythm patterns for various dancers, including the biggest names of his time – Yamini Krishnamurthy, Sonal Mansingh, Kanaka Srinivasan, Rama Vaidyanathan, of course, Geeta Chandran of Natya Vriksha, and many others. He had received both awards and critical appreciation and was a star of his field, taken too soon.

This report comes late, but I want to put it up nevertheless because these are pieces that have been and will be performed multiple times. The dancers presenting the tribute were, in my opinion, among the best honed dancers in Bharatanatyam and worth a watch. The pieces that had been chosen were those created with the contribution of Karaikudi Sivakumar, so they were naturally rich in rhythm. They were expressed with a lot of technical expertise by the Natya Vriksha Dance Company’s senior dancers, who had all worked with the late percussionist.

Geeta ji spoke about her experience of working with Karaikudi sir and the impact of his sudden demise. “The loss of Karaikudi sir was very sudden,” she said. “We all knew him personally. He always spoke in rhythm. This evening was a celebration of his work. He would always keep the personality of the dancer in his head. He would make you sing one composition a hundred times till you got the nuances of the piece.” 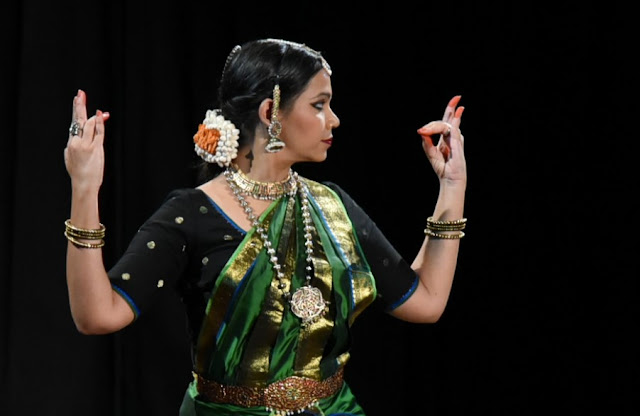 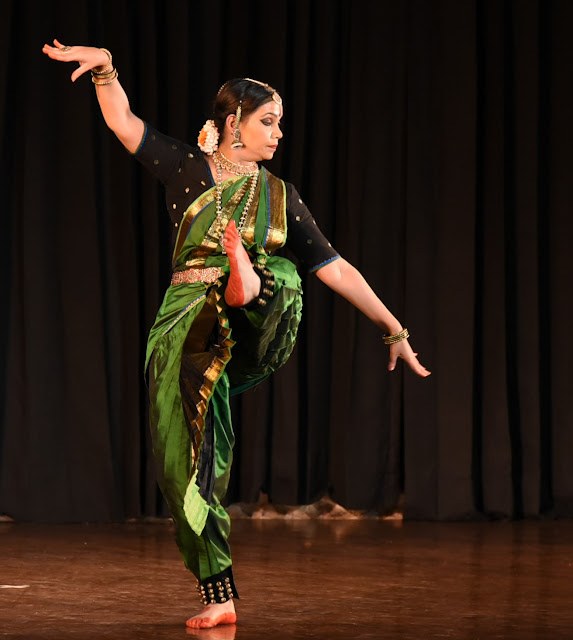 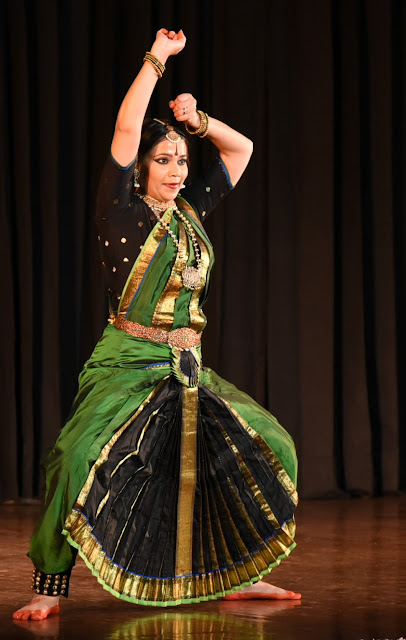 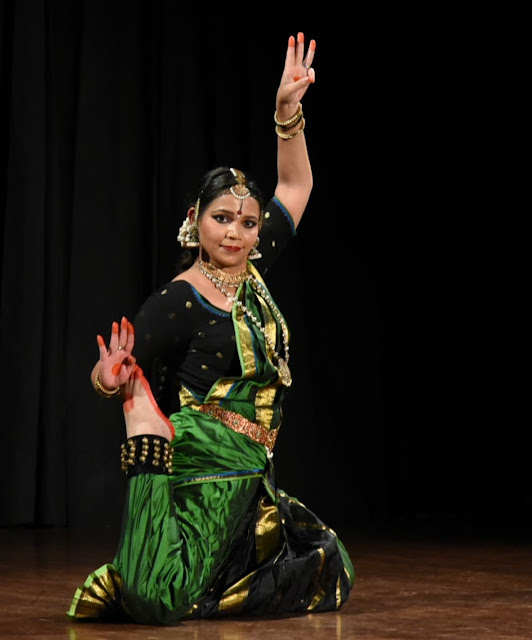 Sneha Chakradhar was the first to take the stage. The piece chosen was Natanam Adinar. Sneha, costumed in black and green, took expansive stances depicting Shiva with his snakes, Nandi, the half-moon on his forehead, the damru in one hand, the agni in the other, his jata tied into a knot, and Ganga flowing from the jatas. The movements had squats, reverse turns, extensive stage coverage and poses in broad plie. She ended with her leg raised and her hand holding her toe. If the primeval rhythm by Karaikudi Sir created the aura of Shiva, so did the abhinaya and dancing by Sneha. A commendable performance. 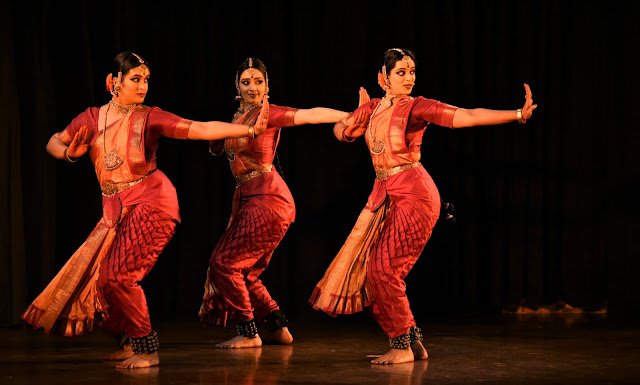 Next was a piece called ‘Pratidhwani’ by three dancers – Amritha, Radhika Kathal and Madhura Bhrushundi. Geetaji described each piece and Karaikudi Sivakumar’s creation of it. “The second piece was created by Sudha (Raghuraman) along with Karaikudi Sivakumar sir,” she said. “It is a creative piece made for the Ananya Dance Festival. At the time, it was called ‘Pratidhwani’. The edited form is now called ‘Swaranrityasudha’. When you have to create something from the margam, many people are not ready to deliberate. I had this vague idea that I wanted to use grihabheda (see report on Anekanta). Lalgudi Sriganesh was not available and Sivakumar sir played the mridangam himself, in a very old-school kind of style. This recording is one of my prized possessions. His voice is there in the jatis he had set. We have three dancers presenting it.” For this piece, Karaikudi Sir had played the mridangam himself. It started with a gong and then the playing of the morsingh. 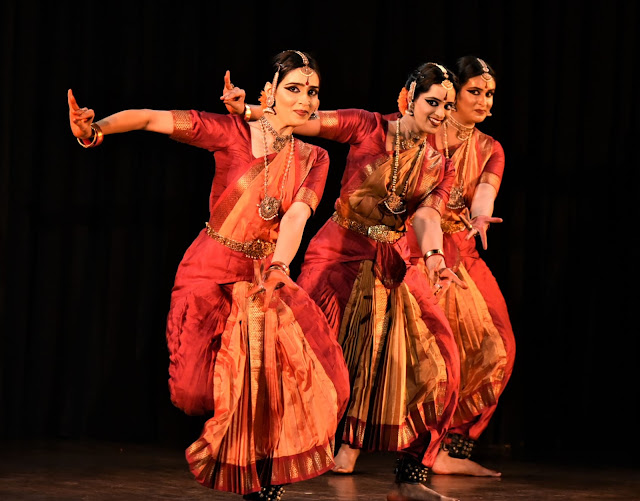 The choreography used synchronized, wave-like movements, visually depicting the echo. The movements were expansive, with extended hands and adavus, had complex footwork and went up and down, back and forth.

Following this was ‘Jativistara’ from ‘Anekanta’, showing the contrast between sound and silence. About this piece, Geetaji said, “The third, ‘Jativistara’, has been explored through silence, rhythm and beats. There are multiple interpretations of the same jati. This is interesting and complicated.” It had silence and beats or rhythm alternately, accompanied by squats turning sideways, up and down, squats and rotations and backward turns. 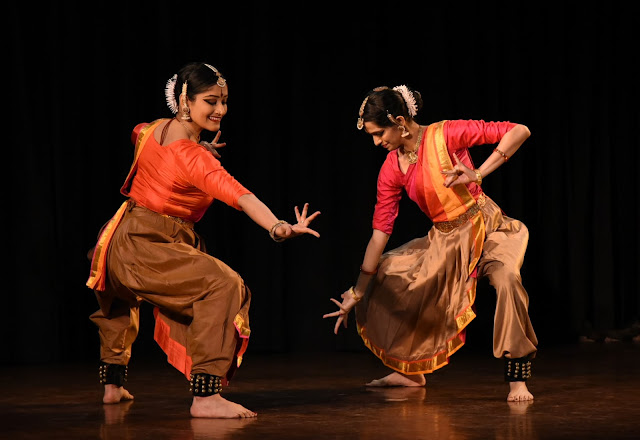 Basically, it showed opposite movements, like dancing in opposite directions. The silences were totally controlled and quite pregnant. Divya Saluja exhibited some excellent footwork. A few interesting moves were movement in three different paces, the dancer in the centre dancing differently from the two outer ones. The footwork was very impressive. 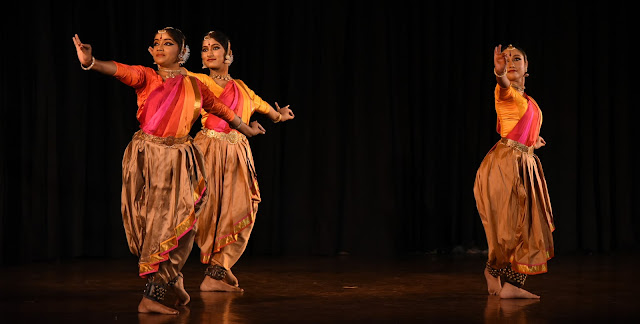 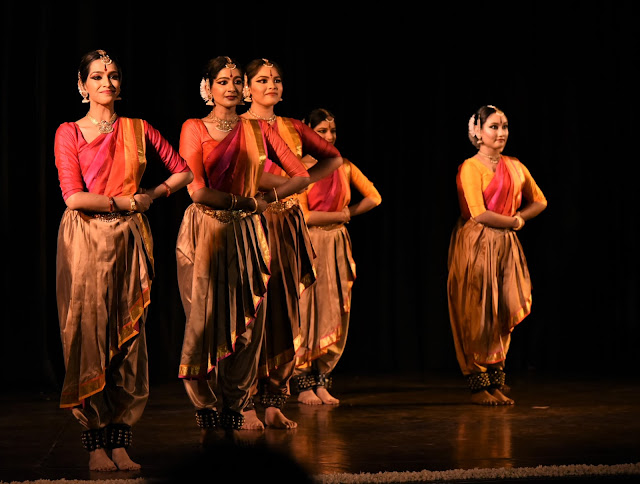 Finally, they ended with a thillana in mishrachapu. Geetaji narrated, “The fourth piece – Karaikudi sir did not do many thillanas with me. This was the most time-consuming since it is in mishrachapu. When we were working, he would want to plan the entire piece first and then delineate the various bits. This thillana is quite complicated and he treated each jati beautifully, without disturbing the framework of the music.”

Sharanya Chandran, in a red costume, started with leaps and rhythmic movements of the hands, depicting a jhoola going back and forth. Her head movements were very graceful and she covered the stage with ease.

The depiction of rain and the peacock dance were very impressive. Krishna was shown with his flute under a tree, surrounded by flowers, cow herds and chirping birds. Finally, he was depicted lifting the Giriraj on his little finger. The dancers painted a canvas of movement and precision. As Rajiv Chandran put it aptly, the piece had a lot of mathematics in rhythm but did not clash with the choreography and the music. 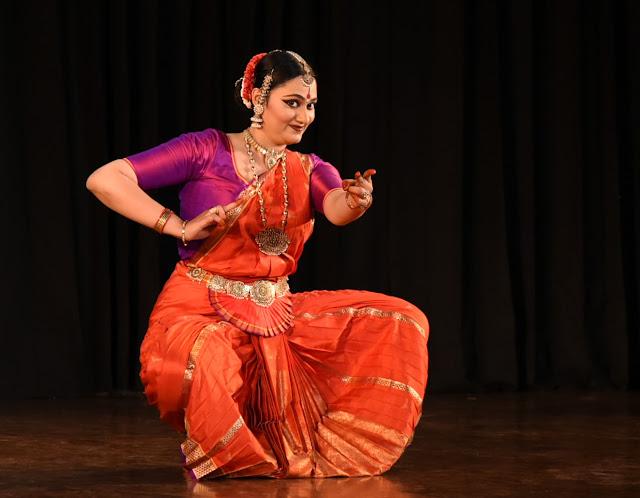