On the 27th of February, the Shriram Bharatiya Kala Kendra presented an evening of classical dance by the present and past faculty of the kendra. The first to take the stage were Swati Sinha and Dheerendra Tiwari for Kathak. Swati and Dheerendra are disciples of the renowned guru of the Jaipur Gharana, Pandit Rajendra Gangani, and have been trained at the Kathak Kendra before establishing themselves as soloists and choreographers. Both now teach and perform to great acclaim in India and abroad.

Their first piece was a Krishnakriti written and composed by Rajendra Gangani. The two dancers started with tatkar and footwork, and using chiselled movements, depicted the attributes of Krishna playing the flute, playing Holi, on the jhoola, nritya on Kaliya, and the giridhar episode through stances – kundal pitambar, mor mukut, nupur, stances as rasraj and radhika – ending again with footwork. 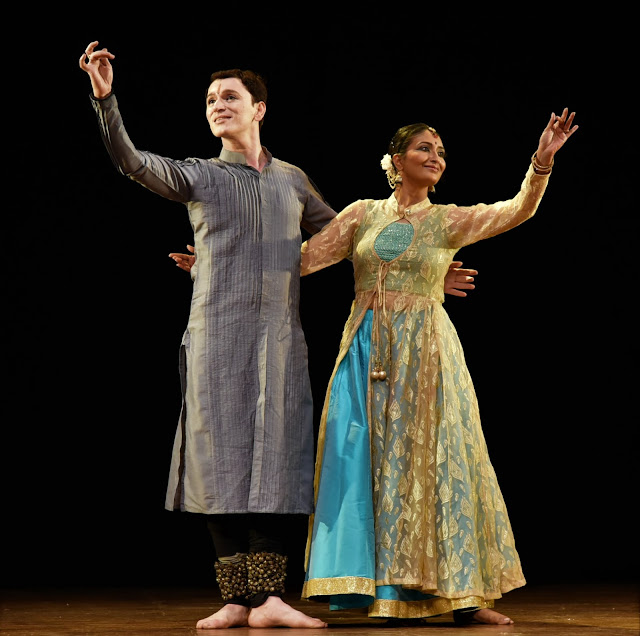 In their technical piece, they performed tukdas in teen taal, starting with footwork, twisting feet, thaat, tukda and Ganesh vandana through postures depicting the lord, tihai, panchamukhi paran, chakkardar tihais and tukdas. Talwar ki gat by Dheerendra and bajuband ki gat by Swati were very aesthetically presented. They ended with jugalbandi with pakhawaj and tabla, and culminated with chakkars. The duo proved their prowess with footwork, precise hastas and very rhythmic tukdas.

The Bharatnatyam faculty presented a full Bharatnatyam margam. This was a very elaborate margam comprising three dancers – Justin McCarthy, Sudha Jagannath and Suhail Bhan. McCarthy is a dancer, musician and choreographer who studied Bharatanatyam under Guru Subbarayan Pillai in Madras before spending a decade with Leela Samson at the Kendra. He has been teaching at the Kendra since 1990. Sudha Jagannath commenced her training in childhood under Smt. Swarna Saraswati and later under Guru Govindarajan. She continued her training at the Kendra, primarily under Justin McCarthy, for over a decade, and has taught at the Kendra for over a decade too. Suhail has learnt under the two gurus who performed with him and combines grace and strength in a distinctive way that is both lyrical and dynamic. 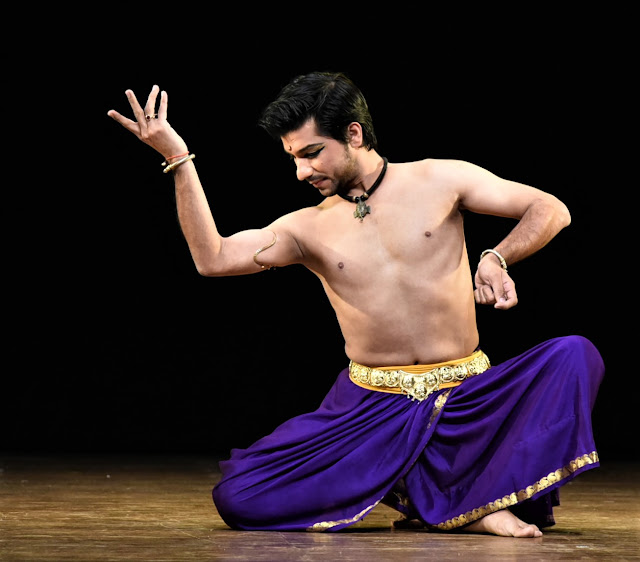 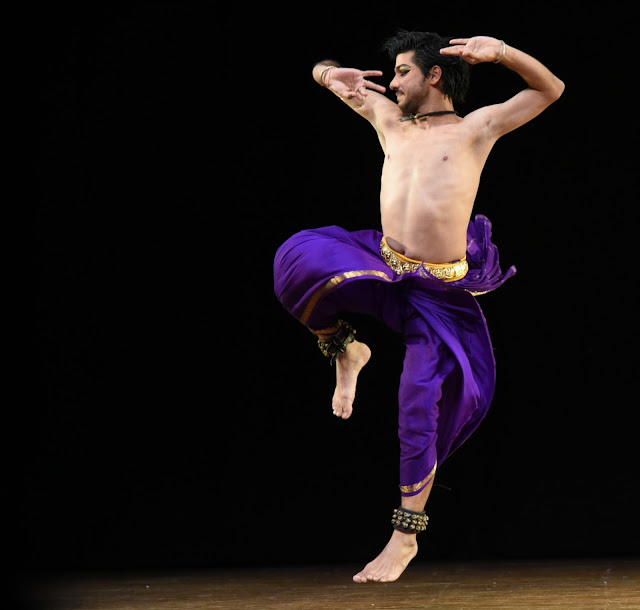 Suhail presented an invocation of Lord Ganesha, a composition of Muthuswami Dikshitar, ‘Mahaganapathi’, in the raga Nattai, aditalam. He started with a stance in broad plie, and through postures and stances he presented the attributes of Ganesha, ‘manasa smarami mahadev suta mooshik vahan modak priyam’, and the god’s ears and trunk. Suhail had a lot of energy, taking leaps and chakkars. 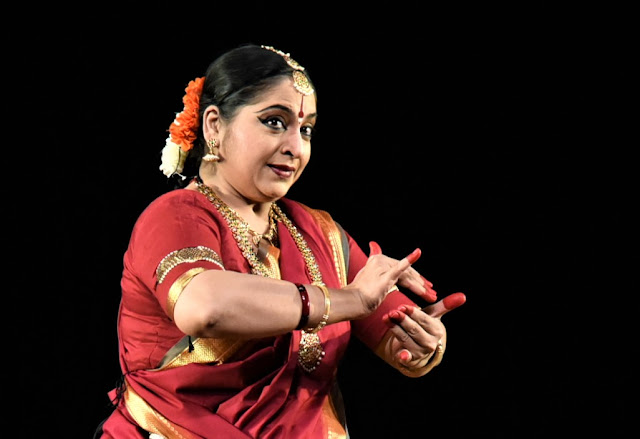 Sudha Jagannath presented a kautuvam addressed to Mahakali in raga Mallika, mishrachapu talam. Mahakali is the radiant one, showering her devotees with mercy. The piece started with the melody of the flute and went on to pay obeisance to Mahakali as attahasini, sharada, kalika, bhadrakali, kamada, mahalakshmi, raktanetra, shoolini, kalaratri, rudra, yogini, shankari, mundamalini etc. Each of these attributes was expressed through gestures, postures and expressions by Sudha, who has large, expressive eyes, which convey a lot. 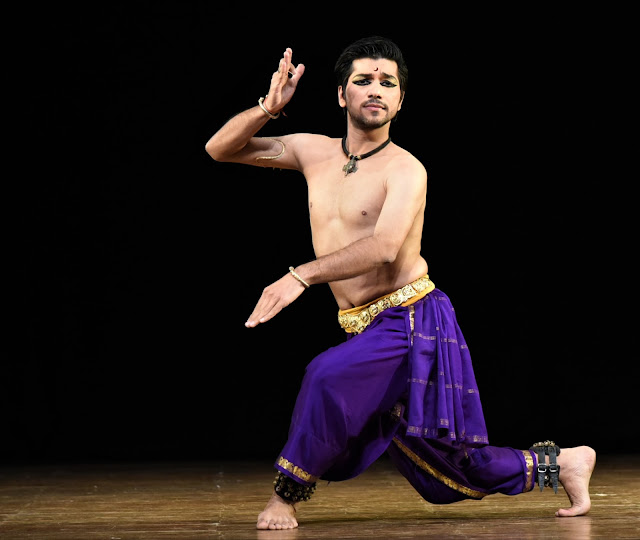 Suhail went on to present a Thyagaraja kriti, ‘O! Rangashayee’ in raga Kamboji, aditalam. The ananta shayana form of Mahavishnu was invoked. The bhakta prays to the Lord to glance at him compassionately. Suhail started with the puandrashaai /? taking the reclining form of Lord Vishnu, showing the lotus emerging from his navel. The Shesha is floating in the Ksheer Sagar where the waves are creating a movement, but it maintains its coils as his Lord reclines on him. He depicted the saranga of Vishnu, the four-armed stance with gada, padma, shankha, chakra in his hands, bhushan and mukta galahar. He depicted the lasya elements of goddess Lakshmi with feminine gestures. He ended the piece taking a reclining posture in various positions with one hand behind the head and the Shesha moving in rhythm with the waves. 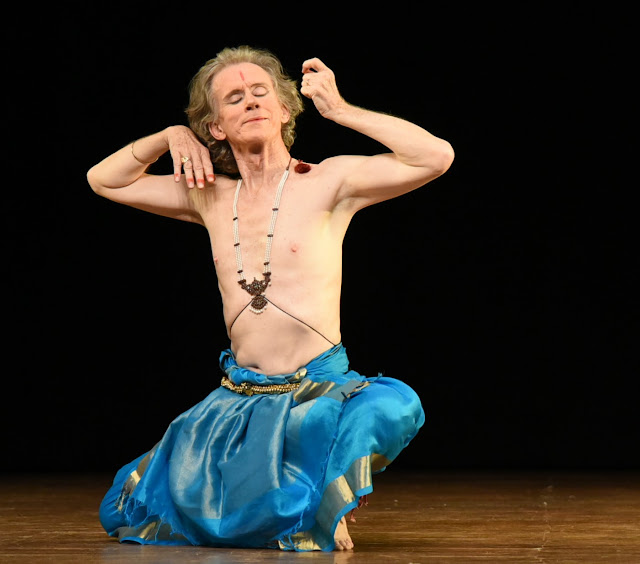 Justin McCarthy presented a varnam, ‘Sumasayaka’, a composition of Maharaja Swati Tirunal, in raga Karnataka Kapi, roopaka talam. Krishna is beseeched by the sakhi to go to the love-struck Radha. She is burning with the pain of Kamdev’s arrows. The rendering of the piece began with showing Vishnu’s chest, which harbours the kaustubh mani, the shrivatsam, and the Lord being addressed as Pundarikaksham. The nritta had a lot of precision of footwork and hands, movements being very precise and defined and expansive. His footwork had cross-feet squatting and very clean lines. 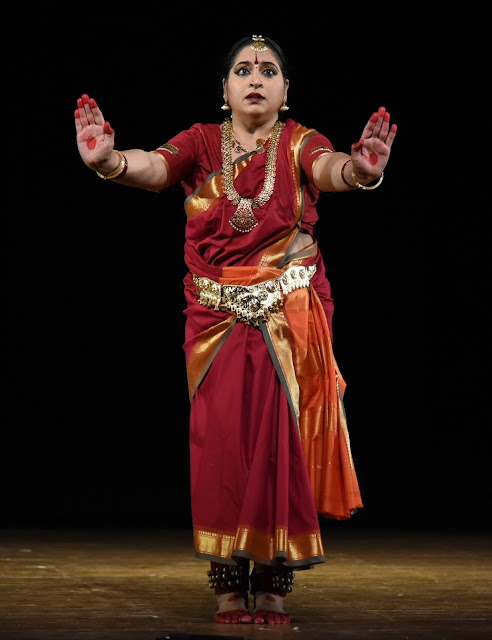 Sudha Jagannath presented a padam, ‘Aliveni’, a composition of Swati Tirunal, raga Kurinji, mishrachapu. The lyrics say that the nayika, Radha, tells her sakhi, O, one with hair like a mass of bumblebees or aliveni, Lord Padmanabha has not come to the rendezvous. Without him, all is useless – the moonlight, the breeze, the kunda flowers and the sandal paste. Sudha’s expressions narrated successfully the trilok sundar padmanabh and the nayika who is struck by the arrows of Manmatha. 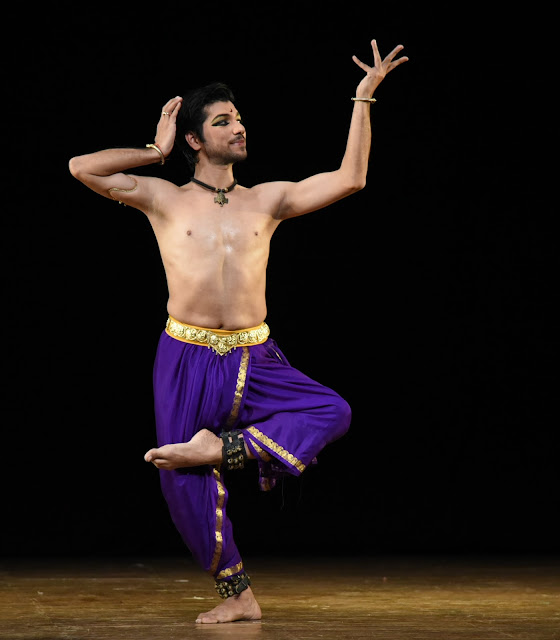 The next piece was a thillana by Suhail in raga Kapi, aditalam, a composition of the Tanjore quartet in praise of the King of Mysore, Shri Chamaraja Wodiyar. The choreography was by Justin McCarthy. Suhail’s dancing is a treat to watch, with very versatile movements, stage coverage, leaps and squats. 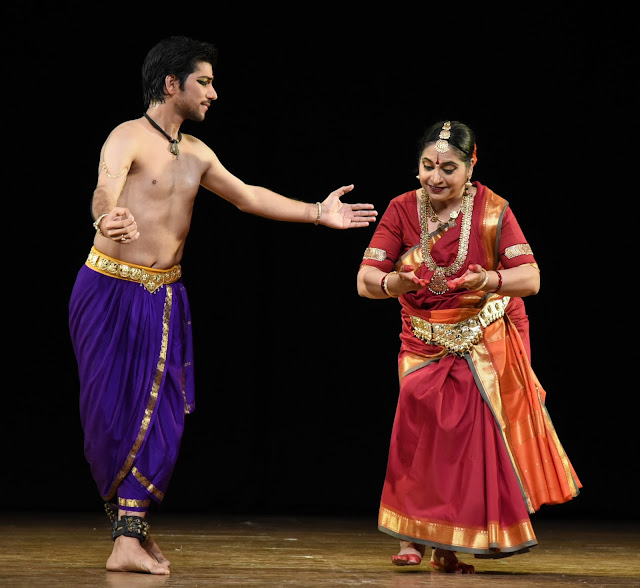 The seventh piece was a themmangu composed by Harikeshanallur Mutthaiya Bhagvatar, set in raga Yadukula Kamboji in tisra nadai. The nayika is overtaken by the vision of the divine as an alluring lover. She is obsessed by the nirmal and beautiful swaroop of the divine, his lips, his damru and Nandi. 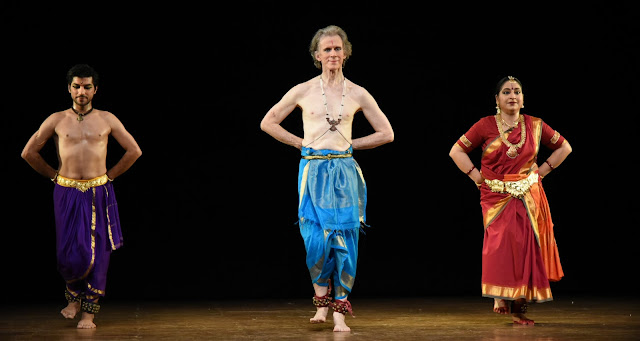 This was followed by a mangalam, an ode to Lord Hanuman, with a few lines taken from Hanumat Stavan, the three dancers together synchronising their neck movements and eye movements to the lyrics, ‘Anjananandanam veeram janaki shokanashanam kapishmakshahantaram ’. It was a feast to watch the entire margam, each piece done with delicate nuances and precision by the faculty. The three gurus, the dancer, his guru and the guru of his guru, made for a technically and aesthetically perfect performance.

For Kathak, tabla was by Zahin Khan, pakhawaj by Ashish Gangani, vocals by Faraz Ahmed, sarangi by Shri Sisodia an padhant by Diksha Tripathi. For Bharatnatyam, the nattuvangam was by S. Shankar, nattuvangam for Justin McCarthy by Sudha Jagannath, vocals by Venkateshwaran Kuppuswamy, midangam by Manohar Balatchandirane and flute by Rajat Prasanna.

The evening concluded with Kathak again by Krishan Mohan Mishra, who heads the Kathak department, and former faculty Ram Mohan Maharaj. Unfortunately, I could not stay for that part of the evening, though I dearly wished to.