‘Nanha munna rahi hoon desh ka sipahi hoon bolo mere sang Jai Hind...’ My patriotism ran high since I witnessed two wars in my childhood, with blackouts and curfew sirens. Yet, I only tried to become an Army doctor - my parents refused to let me apply for permanent commission and nobody in my family joined the forces. That is all our patriotism is about, standing up when the National Anthem is played in the movie halls. Thinking about the families of the martyred soldiers can give you a shudder. So first of all, I take this opportunity to pay my tribute to the defence forces of this nation.

The country is not at war. As civilians, we are going about our lives normally, but reading about Kargil, Uri and now Pulwama... and for that matter, the everyday news about soldiers dying in J&K can totally shatter you. It is not about the numbers, how many critically injured and how many dead. Each life lost is important because that person is an only son, an only husband, an only father, an only breadwinner. Thinking about the families can rattle you. Few have the courage to face what these families face in their sacrifice. Bharat mata’s aanchal is still wet with tears and the splatter of each one of her children’s blood. Anybody who can reach out to these families in whichever way should do so. A terrorist is not the son of any soil and not the believer of any faith. He is a madman, a servant of the devil who destroys. Any terrorist attack anywhere in the world should be condemned and shunned by the entire world, which now lives like one family. Any dastardly, cowardly attack on the spirit of humanity should be outdone by an international outcry. The Pulwama victims, the ones before them and the ones after them should not have been martyred in vain. There should be an end to this barbarism. Hence, if I write, I shall dedicate my words to you, the brave souls of our nation.
As a humble gesture, the classical artist fraternity paid their homage to the Pulwama martyrs at an event held at the IHC on the 17th of March. The evening was put together by Shovana Narayan and Naresh Kapuria. Each artist in their own way and in the language of their own art. The entire fraternity was dressed in either white or black.

The first to take the stage were vocalist Dr. Shanno Khurana and Romi Chawla. ‘Eh kafna cha sajde munde na twade hain na saade,’ they recited and sang a very hard-hitting verse about the dead soldiers in a war.

Guru Bharti Shivaji danced the Mohiniattam to the Shanti Stotram - ‘Sarve bhavantu sukhinaha, sarve santu niramaya’ was a balm to the souls praying for the departed.

Shri Madhup Mudgal and Sawani Mudgal started with the Shanti Mantra and went on to sing gurbani - ‘Nirankar, niradhar, nirahar, nirvikar…’ I have a direct connect with gurbani since I spent a lot of my childhood in Amritsar near the Golden Temple. And their soulful singing made a direct connect with the One. May the sound of this give the deceased peace and their families strength and deliver a blow to the divisive forces.

Guru Geeta Chandran danced Bharatnatyam to a composition called ‘Jayati jayati Bharat Mata, sakal jeeva samata sadhu sadhu vividha, ati dayal mata’, summarising the spirit of our country, our mother, which is not only beautiful, but has unity in its diversity, evoking pride and patriotism.

Ashish Khokhar called himself the grandchild of Partition, mentioning that his aunts were doctors in the Army. He talked of instilling SOS or sense of service in every person and the need to make NCC compulsory for every individual to instill discipline and nationalism.

Pratibha Prahlad in Bharatnatyam danced to ‘Veeradhwajam ati shoor dhwajam’, a composition which was full of veer rasa. She depicted praying in all three religions, calling out to Allah, the aarti and the prayers of Christians, describing the Himalayas and the great geography of this country. The act of hoisting the flag and the salute evoked patriotism and valour.

Guru Madhavi Mudgal enacted a shloka from Atharva Ved in Odissi. The music of this composition had been beautifully composed and summarised the emotion, let there be concord among our people, even among strangers, as the lord of war shoots his arrows on us.

Rama Pandey’s poem on one hand moved our hearts and on the other, gave a jolt to the system. Her poetry was inspired by the sight of the father of a dead soldier walking to the dais to receive the Shaurya Chakra posthumously. What thoughts and emotions cross the father’s mind - ‘theher wahin khada samay…’ His eyes are dry with a void as the name is announced - shunyata. The name brings alive the sight of the dead body of his son and pain like the bite of snakes - ‘jee uthati hai bete ki laash’. He thinks of all the ceremonies of his childbirth, mundan, marriage and now being a part of his funeral, the worst nightmare for any parent. That path to the Rajpath is like agnipath for him. And then about the irony of war and the loss of lives when the common man is busy with his corrupt practices. ‘Kalank na dho paya rakt ka lal rang’ - even a very inert soul would have been moved to tears and then anger for the system. I can already feel my eyes tear up as I write.

Guru Saroja Vaidyanathan in Bharatnatyam presented an apt act about a soldier leaving his home with pride when leaving for war. His wife and mother too feel that sense of pride. He fights with valour and when his dead body is brought back, his mother and wife are grieving and yet, they do not forget that pride. It is a salute to their families.

Loveleen Thadani read out two letters by two different people – one written by an Army officer just before he died, and another the story of the mother of Hanifuddin, who said she did not want her martyred son’s body to be recovered from the slopes of Kargil because the attempt would endanger more soldiers’ lives.

Guru Sharon Lowen presented ‘Omkarakarini’ in Odissi. Her actions drawing aum, trishul and the third eye depiction of Shatrudamini, Rudraa evoked veer rasa, reminding us that Devi or Mother can even destroy evil if she wants to.

Alka Raghuvanshi stirred emotions when she talked about the coffin swathed in the tricolour. The soldier makes a promise when he leaves for war - ‘ya jhanda lehra ke aaunga ya usme lipat ke aaunga’. A universal truth is that nobody wins a war since the price is too high. Does anybody think of the families affected? Soldiers lay down their lives for total strangers so that they can live a normal life. The arts owe it to them since no art can prosper in an atmosphere of injustice and captivity.

Rashmi Vaidyalingam, disciple of Gurus Radha and Raja Reddy, delivered the message of her gurus saluting the soldiers. She herself recited a poem about a child who keeps asking his widowed mother why his father was not home for Diwali. He wants new toys but when he sees his father’s body arriving, this little child says that we will fulfil his father’s dream of protecting his country.

Sadhna Shrivastav reiterated the fact that the arts need a free atmosphere to prosper while reciting ‘Phool ki chah’. 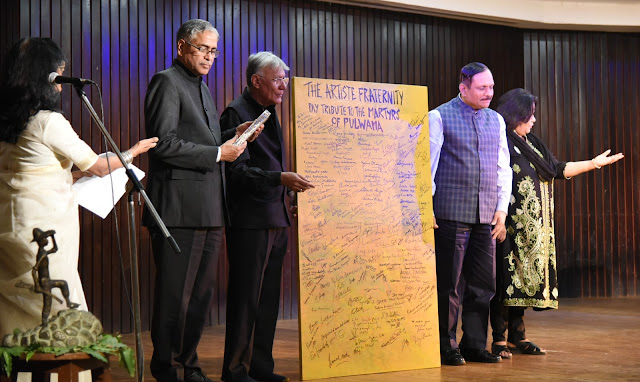 A canvas signed by all the artists and a sculpture of a soldier were presented to the DG of CRPF. Various artists from all walks of life in varied art forms, in different languages, paid their tribute to all the soldiers martyred in the Pulwama attack.


When asked about the motivation behind organizing the tribute, Shovanaji said, ‘I just had one thought when I approached IIC and got together all my artist friends - namely, that our forces are facing bullets so that we can live in peace, and the least we can do is to show that we are with them and that we respect their sacrifices. We are classical artists and we speak with our hearts, with emotions.’ In her introduction of the artists and her narration of the programme, she skilfully recited excerpts from some famous poems and compositions like ‘Sipahi’ and ‘Rashmirathi’ by Ramdhari Singh Dinkar, ‘Path ki pehchan’ by Harivansh Rai Bachchan, among others.