Precision, grace and lineage in Odissi by Madhur Gupta

Madhur Gupta presented an Odissi performance on the 11th of September at the Triveni Kala Sangam auditorium as part of the Aarambh series presented by the Raza Foundation. The performance titled ‘Pratibhas’ showcased classics choreographed by his guru, Sharon Lowen, and her guru, the legendary Kelucharan Mohapatra, tracing his lineage, in a sense. 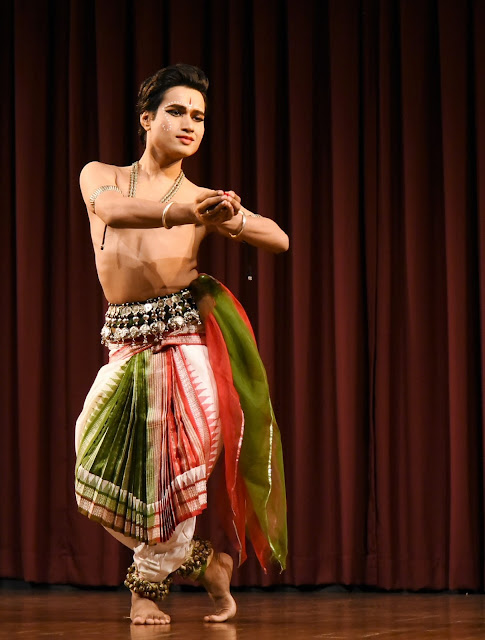 As a performer, Madhur belongs to the Kelucharan Mohapatra gharana of Odissi, and also writes on Indian classical dance and music. 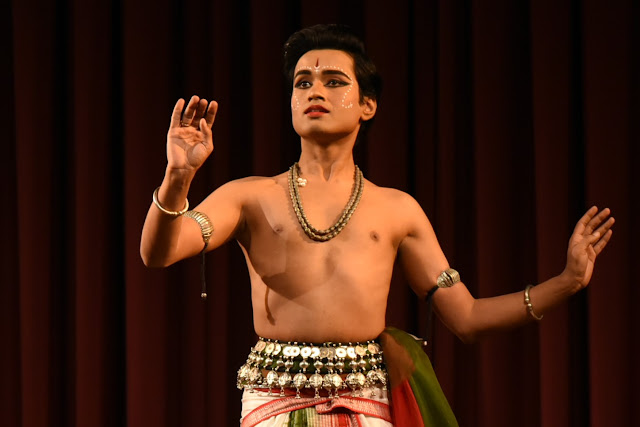 The performance started with very basal notes of the flute. The mangalacharan was an ode to Ma Kamakshi Kalyani from Kanchipuram, in raag Mallika, taal Mallika. The pushpanjali described the beauty of the goddess – ‘ratna kankana, lasat urhar, kasturi kanchuki, chood hastam’ – lotus-faced, with the parrot on her hand. She is bejewelled and adorned with flowers. Even Shiva, the destroyer of Kama, loves her. The nritya for this piece was neat, taking expressive stances in the abhinaya for the goddess. The nritta had sharp movements, including footwork in chauka and tribhanga, and leaps on heels. 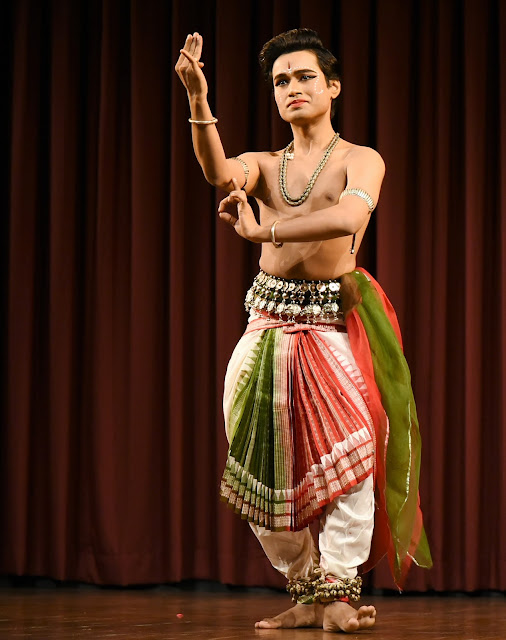 The second composition, ‘Jhagadi matra hela he Shyam’, was a choreography by his guru, Sharon Lowen. Champu is a form of traditional Oriya poetry, and in the jhagadi matra champu, there is a repetition of the ‘jha’ sound at the beginning of each line. Here, the sakhi tells Krishna that when he sees Radha, it’s as if he melts. She tells him, why does he sit like a wilted flower in wait for her, why does he not go to her? She tells him that he is the one who vanquished Kaliya, and he is the one whose son is Kamadeva. 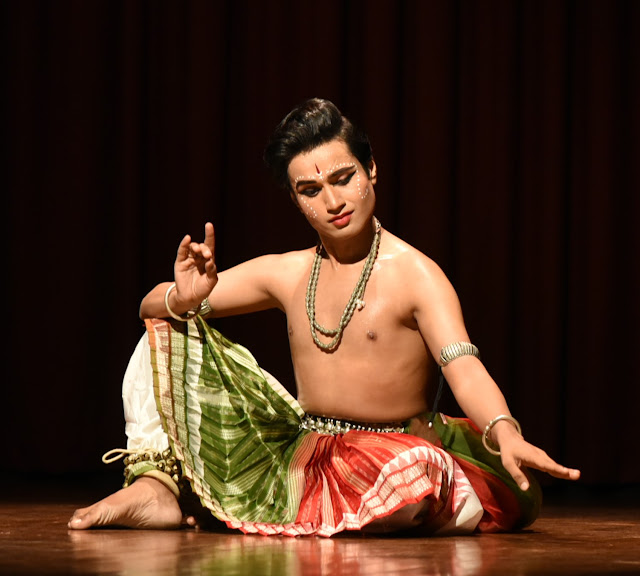 In the rendition of the piece, Madhur depicted the Yamuna teer, the bees on the lotuses, and the calves frolicking around. Krishna is lying like a wilted flower in the heat of the sun. The sakhi tries to provoke him to get up – she sprinkles flowers on him – but to no avail. She tells Krishna that it is as if he sees Radha everywhere. Is he the shikari or the shikar? Madhur performed the abhinaya sensitively and exhibited his prowess in very neat and complete movements of his hands and feet, and in the rotations and leg lifts. 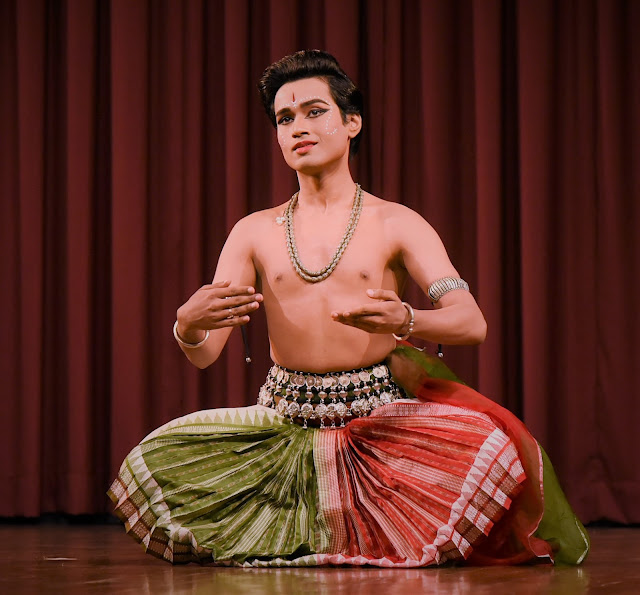 The following piece was a pallavi, an interplay of taal and laya. It literally means the blossoming of a flower. It was in raag Shankarabharanam. Again, the nritta showed the ease of swaying movements in tribhanga, crossed-feet footwork and movements of the hands, all executed well. As the pace of the nritta picked up, the footwork was rendered well with a lot of stage coverage. 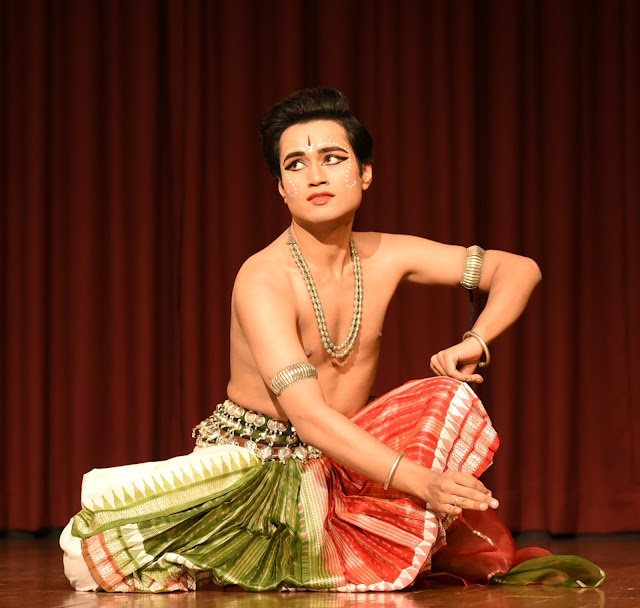 Finally, Madhur did another abhinaya composition, a Jayadev ashtapadi, ‘Pashyati dishi-dishi’. It had been choreographed by Kelucharan Mohapatra. The sakhi goes to Krishna and tells him how Radha is pining for him. Radha looks for you everywhere, she says, sees you in every particle of her existence, and is saddened to see you with other gopis. She is all decked up to meet you. The virahini Radha strings flowers, the lotuses remind her of your feet, and the morpankh reminds her of you. She dresses up and looks in the mirror, picks each piece of jewellery – earring, necklace, bangle, armband – and wears them. She wears her kajal, bindi and saree, and lotuses in her arms. She burns with desire for you and the surroundings are fanning her desire. The moonlight or the chandrama and the chandan both are unable to diminish the burning desire she feels. ‘Vilapati’, ‘rodati’ are the words used to describe her condition. Madhur expressed these emotions appropriately in a performance marked by precision. 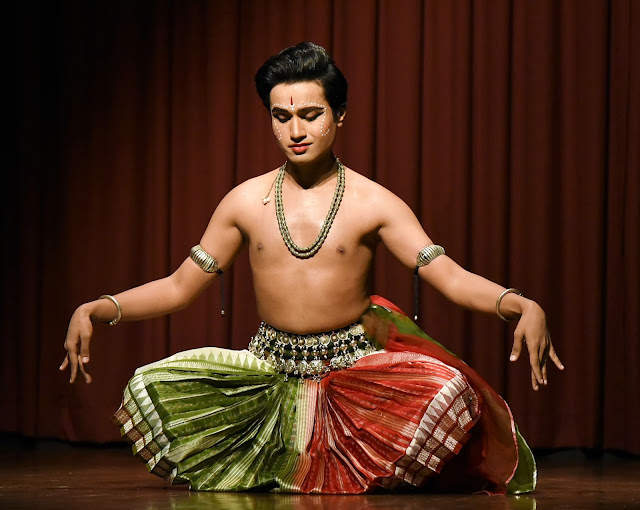 At this performance, Tanya Saxena was on the manjira, Praful Mangaraj on the mardala, Rajat Prasanna on the flute, Basanta Kumar Behera on the vocals, Chitkumar Behera on the tanpura, Shaunik Sharma on the lights, and Brij Mohan Gupta on makeup. 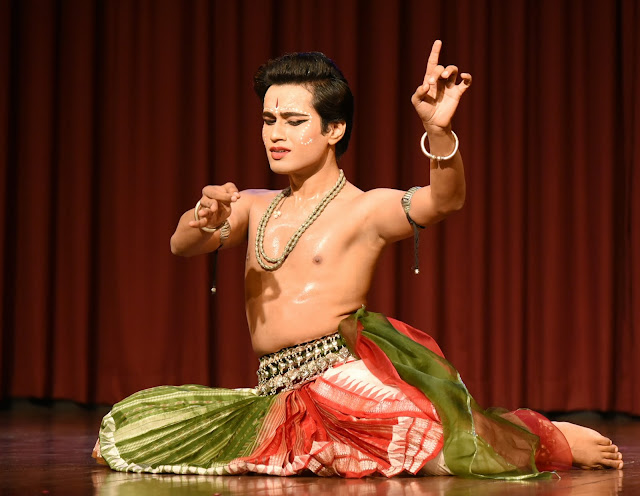