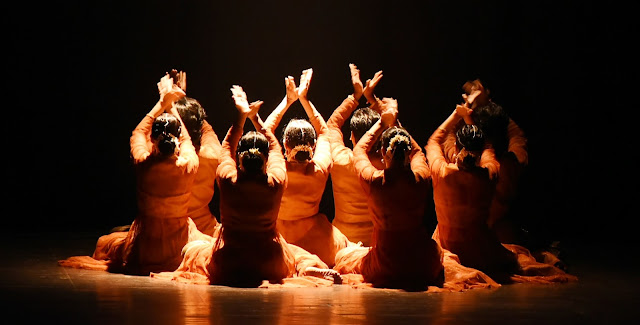 Rachana Yadav presented a dance choreography at the Shri Ram Centre for Performing Arts on the 31st of August. Rachana, who is the managing director of a literary magazine and has worked in advertising and interior design, started learning dance at 30. She has learnt from gurus Ravi Jain, Aditi Mangaldas and Jaikishan Maharaj, completed her Prabhakar in Kathak from the Prayag Sangeet Samiti, Allahabad University, and been a repertory member of Aditi’s Drishtikon Dance Company. She now teaches dance in Gurgaon. She is the daughter of Hindi literary stalwarts Mannu Bhandari and the late Rajendra Yadav. Her mother has authored the short story ‘Trishanku’, on which this production was based. Rachana interpreted the story in her own poetry and text to suit the theme of the production. As a mother of grown-up children, I usually say that we are a sandwich generation. With our parents, we were at the receiving end, and now, with our children, we are at the receiving end again. Our generation has seen a great transition not only in technology, but also in societal norms. 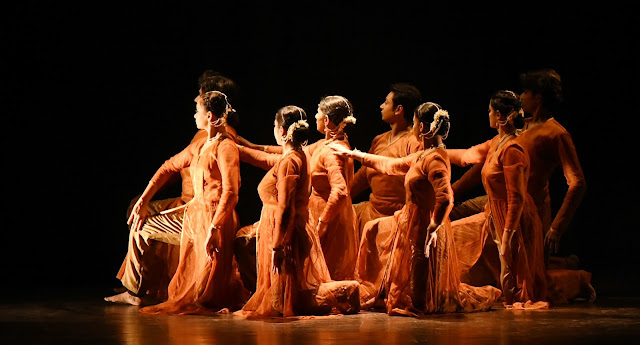 Trishanku is actually a mythological character who hangs between heaven and hell. So the theme of a ‘middle generation’, which hangs like a trishanku, was quite relatable. The evening started with Sangeeta Rai narrating a part of the story ‘Trishanku’. The narration of the story was very expressive. The central character is a young girl who is narrating the story of her mother in her own youth having a tiff with her father - ‘hamara ghar buddhijeeviyon ka akhada tha... Mummy ko aksar nana se morcha lete hue dekha’. Her mother wanted to do something different - ‘leek se kuch hat kar karna chahti thi’. 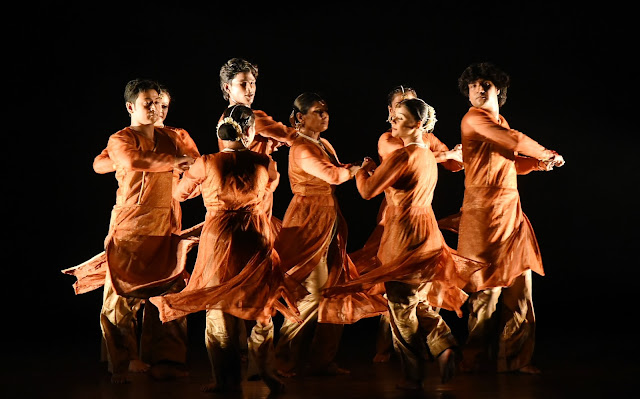 Finally, she has her way and marries the person of her choice. Now the mother has a daughter, who is the primary figure, who is young and keeping the company of boys, the paying guests in a room across the street. The girl begins a romance with one of these boys and the mother finds out. And she sees her nana coming alive in her mother – ‘Tumhe azaadi di thi… jhaapad se romance chhant jayenga… Mummy ke bheetar nana phir zinda ho gaye.’ But the rebellious girl had her own arguments to counter her mother - ‘apne sapne bhi tum dekho, aur mere bhi? Kuch mere liye bhi chhod do.’ It is the girl’s turn to break the traditions and take flight. A theme very relevant and easy to relate to, but I thought the portrayal in dance, in classical Kathak, would be quite a task. 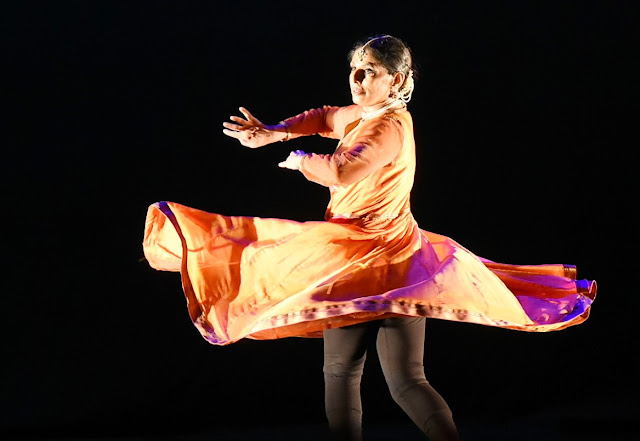 The first part, as the brochure said, was about tradition being a force devised to tie us to a social order – ‘seemayen jahan humein suraksha deti haim, wahan humein bandhan mein bhi bandhti hain’. The piece started with soft, gentle recorded music with Om as the alaap. The music for this production had been composed by the famous Gundecha brothers. The dancers sat with their backs to the audience in a group. They wore rust/orange costumes. Each dancer touched the one in front with her/his hand while swaying gently. They interlocked their arms in nritta and stances. They were showing being tied down by tradition.


As the pace of the dance picked up, the dancer in the centre (Rachana herself) would intermittently break away from the movement of hands to raise her hands higher to show the emerging rebellion. The swaying dancers are the binding traditions or seemayen of the present, and the emerging dancer is the one who belongs to the future of rebellion. The piece progressed with chakkars, pakhawaj bol, tihais and aamad – ‘nikal padun apni rah, badhun toh apni chah se, tod doon sab bandhan’. The gentle, rhythmic movements of the dancers brought out the right impression – that of moving as one in tradition. 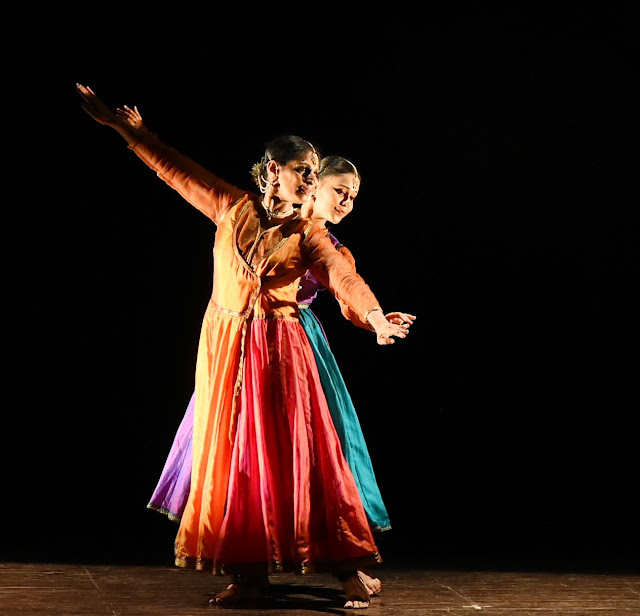 The second piece, as the brochure said, was about when tradition becomes our security, about when the mind is secure, it is in decay – ‘meri sarhadon ki dhool udate gaye, bandhan-mukt karate gaye’. In the second piece, the portrayal is that of an independent woman, who makes her own choice. The song describes her as ‘balkhati, ithlati, albeli, chapal naar’ – ‘nayi dishaon mein chanchal hawayein, jeevan ke samet sapne hazaar’. The song was sung very melodiously and it rightly summed up the free spirit of a woman just finding her freedom. This was a solo by Rachana, where she represents the independent woman in love, capable of breaking all limits. The dance and abhinaya were well-executed, but I felt her costuming was somehow obstructing her movement.

The third piece was about the concept of change, which changes with each generation – ‘khul kar behene ka har dum paath padhaya’. The music for this piece had percussion using the morchang. The nritta portion had chakkars, with dancers flying across the stage. They moved rapidly, showing the flight of love. Their footwork, pairon ki uthan, tihais, ek pair ke chakkar were impressive, the dancers dancing in dhrut with admirable pace, each one of them showing their prowess. The music also used ghatam and dhap for percussion. ‘Kshitij ko par kar jaun, khushbu chahun or phailaun, jhonke toofan ban gaye, hadon ko par kar gaye,’ said the voiceover. The dancers used tez aamad, chakkars, clapping, tihai – a very unrestrained kind of dancing. ‘Pawan se swachhand, azaad panchhi, toofan patang ko saath le ud chale,’ said the voiceover. Again, the precision of the dancers’ Kathak and their coordination was brought out in the choreography. 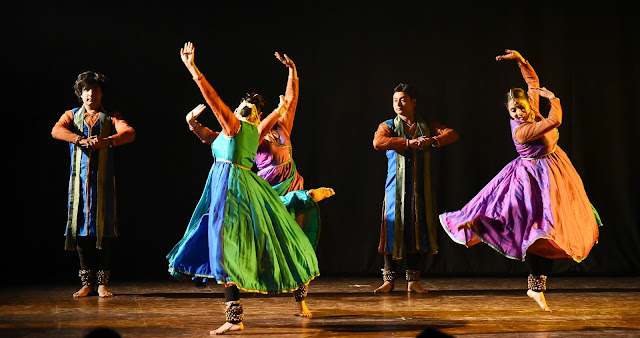 Is there a perfect balance point between the new and the old? Or are we in a constant state of conflict between one and the other? ‘Tod kar aayi thi ateet ki woh dor, ab kyun dhoondhoon main usi ka koi chhor?’ asks the poetic voiceover. In the final piece, life comes full circle. It is the turn of the daughter now to take flight. She has grown into an independent being, and wants to marry the person of her choice – ‘aasmaan mein aanchal sa leheraun maine chaha, swatantrata parampara hai, beete kal ki parampara tod kar aayi hoon, aanewale kal ki parampara hoon’. The performance ended with fast-paced nritta and finally, Rachana oscillating like a pendulum between two groups of dancers in the last scene to show the shifting between the past and the future. The team of dancers in the production must be appreciated for their prowess.

Talking about the choreography, Rachana said that in the beginning, the dancers are all tied together, with one occasionally breaking away. And as the central character enjoys her freedom, the next generation, the dancing becomes scattered and the choreography shows freedom. Finally, the character is like the pendulum of a clock - the middle generation oscillating between two opposing situations. 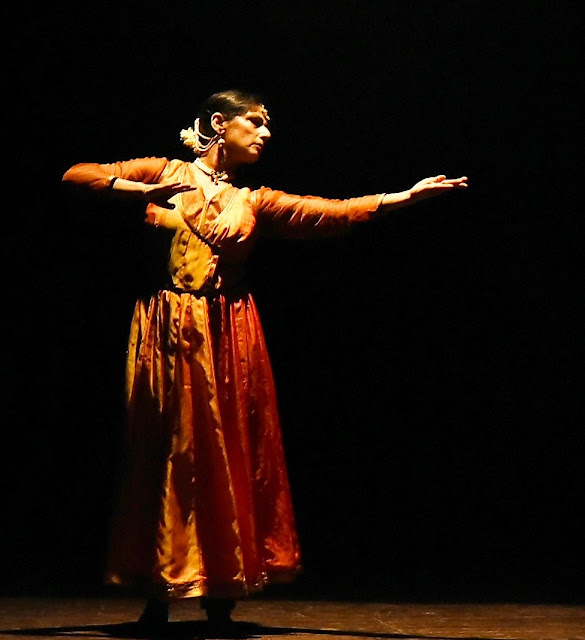 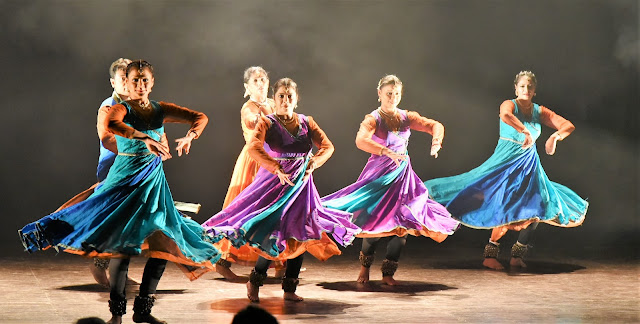 The concept and choreography were by Rachana, based on the short story ‘Trishanku’ by her mother, Manu Bhandari, as mentioned previously. Mannuji herself was in attendance too. The music composition was by the Gundecha brothers and Samiullah Khan, and light design by Govind Yadav. The costumes, poetry and text were also by Rachana, with Kathak technical inputs by Mahaveer Gangani. The musicians were Yogesh Gangani (tabla), Mahaveer Gangani (pakhawaj), Sanjeev Jha, Manish Kumar and Samiullah Khan (vocals), Uma Shankar (sitar), Kamaal Ahmed (sarangi), Kiran Kumar (flute), Keshavam (mridangam and ghatam), Gagan Singh (other percussions and effects), and Adnan and Farhan (guitar), all recorded at Neelam Studio. The dancers were Shweta Mishra, Minu Garu, Shubhi Johari, Rohit Pawar, Abhishek Khinchi, Nidhisha Varshney and Siddhant Purohit, besides Rachana herself.