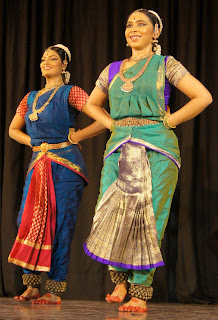 On the 18th of July at the IIC, Aparna Chithranjan and Preethi Nedumaran from Chennai performed a Bharatanatyam duet. They are the disciples of Guru Smt Meenakshi Chitharanjan.

There are many parallels drawn in the tales of the two avatars of Lords Vishnu. Ram, or Raghava, is a suryavanshi and led life as a ‘maryadapurushottam’. Krishna, or Yadava, is a Chadravanshi and his life has instances that depict ‘aishwarya’. So the theme of the performance had a lot to depict. 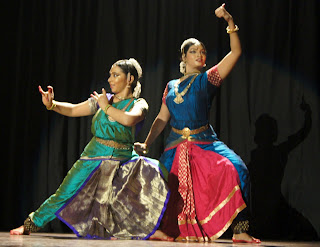 The first piece of the performance was a vandana of both Ram and Krishna. It was set in four ragas. Episodes were related from the life of Rama and Krishna with the refrain being used as an interlude. Aparna and Preethi took on different characters, with Aparna posing as Krishna and Preethi as Rama.

Next was the story of Goverdhan Puja. Indra, the god of rain, is angry and all of Brij is in danger of being inundated by floods. Krishna lifts the goverdhan parvat on his little finger and saves the people. After the interlude, the story of Sita and the golden deer was performed. Sita is enticed by the golden deer in the forest. While Rama goes to capture the deer, Sita is kidnapped by Ravana posing as a brahmin. A fight follows between Ravana and Rama, and it ends with the death of Ravana. Vibhishan is made the king of Lanka. Finally, the last tale is that of Arjuna being driven by Krishna in his chariot. Arjuna is overwhelmed by the sight of his relatives as his enemies. Krishna then awakens his conscience with ‘Geetopdesh’ – ‘sambhavami yuge yuge’. Finally, the posture of Preethi and Aparna as Rama and Krishna was captivating. The abhinaya was excellent and so were the pure dance interludes.

Next, ‘Krishna ne begi ne baro’ and ‘thumak chalat Ramchandra’ were performed. Both the pieces were similar in depicting Krishna and Rama as toddlers playing with their mothers. But while Krishna is frollicking and playing , Rama looks more sober and walks around with his dhanush. Krishna was done by Preethi. Yashoda Maa is playing with the toddler Krishna. She feeds him fresh makhan and then picks him up. Preethi was very expressive in her abhinaya. In ‘thumak chalat Ramachandra’, Aparna depicted the game of hide and seek being played by Rama and his mother and then Rama walking around with aplomb. 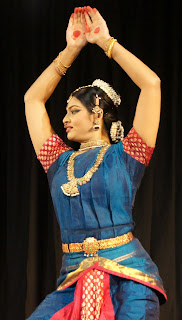 Next was a tillana showing the story of ‘Kaliadaman’. Aparna danced as Krishna and Preethi as Kalia. Krishna is playing the ball with his friends at the shores of the river Yamuna and deliberately throws the ball into the river. He then jumps in to retrieve it, where he fights and vanquishes the great Kalia Naag. He comes out dancing on the serpent’s head. Again, the technique and abhinaya left the audience mesmerized.

Lastly, it was the recitation of shlokas in praise of the two avataras, with Preethi doing the ‘Namami ramam raghuvansha natham‘ and  Aparna dancing to ‘Krishnam Vande Jagatgurum’. The performance culminated in both the dancers standing back-to-back and posing for ‘Achyut Keshavam Ram Narayanam’. It was an awe-inspiring theme executed with excellence. 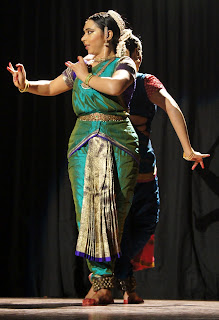 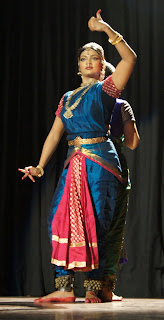