The bird’s eye view, literally, of the story of a war is an interesting concept, and that’s how innovative theatre can get. On the 30th of June, 2012, TRAM theatre presented a non-verbal object theatre, ‘A bird’s eye view’, at the Studio Safdar in Delhi.

Studio Safdar is tucked away in a corner of New Ranjit Nagar near Satyam Cineplex, Patel Nagar, Delhi. It is founded by the theatre group Jana Natya Morcha. The place has a small theatre with a very informal setting, a cafeteria and a book shop. The ambience makes you feel the informal creativity that the place is full of. Chennai-based artist Praveen has painted murals on the exterior of the building.

TRAM theatre was founded in 2011 in Mumbai with the object of practicing and propagating object theatre. The story in the play is told with the help of objects, drawings/paintings and an actor who handles them. This form of theatre is a sub-genre of puppetry; it lifts everyday objects and lends them a personality. 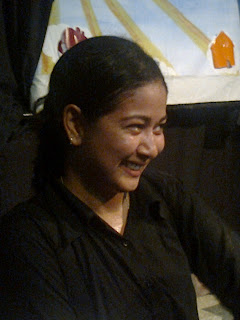 Choiti Ghosh
Choiti Ghosh, an object theatre practitioner, actor and puppeteer, was the director and actor of the evening’s play. The performance began with a pair of boots walking and clicking, or in fact, being manipulated by Choiti. The boots are the villains of the show, the power hungry makers warmongers. Then begins the story of ‘Milu’, a carrier pigeon. The scene is a bird-house and a tree. Choiti with the hat is the trainer and without it, the pigeon. In the bird-house, the egg is incubated, the fledgling is fed milk and worms and finally, ‘Milu’ the pigeon emerges from his house. The tree also grows bigger. ‘Milu’ is a toy pigeon and Choiti does all the cooing. Next is the training of ‘Milu’. Again, Choiti with the hat is the trainer, and without it, ‘Milu’. The trainer tries his utmost to make ‘Milu’ fly, but the pigeon is quite reluctant. Choiti keeps shouting – “Milu, training!”, but the pigeon does not fly. So, Choiti as the trainer puts the bird-house amongst the audience and ‘Milu’ readily flies, cooing innocently. The first message that ‘Milu’ carries is ‘Good boy, Milu’. Then ‘Milu’ makes friends – two plastic frogs and a toy mouse. His mate is another toy pigeon. Milu wears a red bow and his mate wears a veil and they get married. The bird-house now has a home-sweet-home banner. But this happiness does not last. All is lost in a storm and ‘Milu’ is taken captive.

The scene changes and Choiti makes the two wicked boots kick and trample a plastic globe, representing the earth. War breaks out. To show the war, Choiti spread sand on a plastic sheet and placed GI Joe figurines on it to depict soldiers. The two big boots are the commanders of the wars. Gun shots were fired from toy guns. Darts were missiles and glowing balls were bombs. The soldiers keep dying in the firing. One of the boots takes out a rifle and shoots the other, who then lies injured. The injured boot then sends out a message for “help”. Now it’s the job of ‘Milu’ to carry the message around his neck. ‘Milu’ relentlessly flies to convey the message. A screen in the background shows the night and day that Milu is flying through. The screens were made by two ten-year-old kids. Along the way, Milu is shot at and falls almost dead. An eagle is hovering, waiting for him to die. Milu has visions of his wife and friends. Choiti shows his pain and struggle to keep alive. Finally, with a lot of will power and effort, Milu flies off again on his mission.

Choiti next showed a village set on fire by smaller shoes which are the subjects of the bigger boots. Milu bravely douses the fire and moves on. The next scene is that of a pond of water which is shown by a glass bowl filled with blue water with toy birds and trees around it. A thirsty Milu comes to drink at the pond but finds it contaminated with guns and dead soldiers. In the midst of the war of the boots, Milu flies towards the mountains shown by a change of the screen. He is very cold and Choiti makes him wear a woollen scarf. He then reaches his home again and in the clouds, he is dreaming of his friends and mate, again shown in the background screen. But once there, he finds his house broken and the tree barren. Finally, Choiti becomes an army man and awards Milu with a medal, a trophy and the honour of being given the title of 'Agent Milu'. She spoke in some incomprehensible gibberish which sounded hilarious, but conveyed the meanings beautifully. Milu, meanwhile, cannot comprehend the situation and keeps looking around, cooing to the audience, again enacted by Choiti. The irony of Milu’s life is apparent, since he does not fathom what he has gained.

The special effects, props, sound effects and lighting were excellent. Choiti did a wonderful job of manipulating the objects and at the same time, enacting the characters to convey a very touching story.