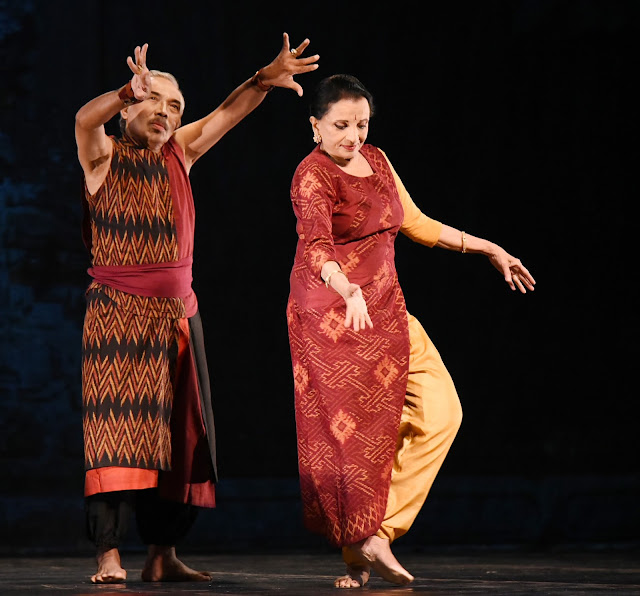 As part of the centenary celebrations of the founder of Rasaja Foundation, Jaya Appasamy, the foundation hosted a two-day festival called ‘Merging Borders’ in Delhi last year. The event was hosted at the Kamani Auditorium. Day 1 featured a discussion and a solo Kathak performance, ‘Nimitta’, by Shila Mehta. Day 2 was a unique collaboration between Bharatanatyam and Balinese dance by Sampradaya Dance Creations, Canada. It was an adapted retelling of Mahabharata with a special focus on the dice game between the Kauravas and the Pandavas. Lata Pada, known for contemporary Bharatanatyam creations, joined hands with distinguished Balinese choreographer Dr. Wayan Dibia, master of Balinese dance and topeng, Indonesian mask dance, to produce ‘Pralaya’. Pada is an Indian-born Canadian choreographer and Bharatanatyam dancer, and the founder and artistic director of Sampradaya, a dance company that performs South Asian dance. The production was an amalgamation of two dance forms, plus puppetry and masks. 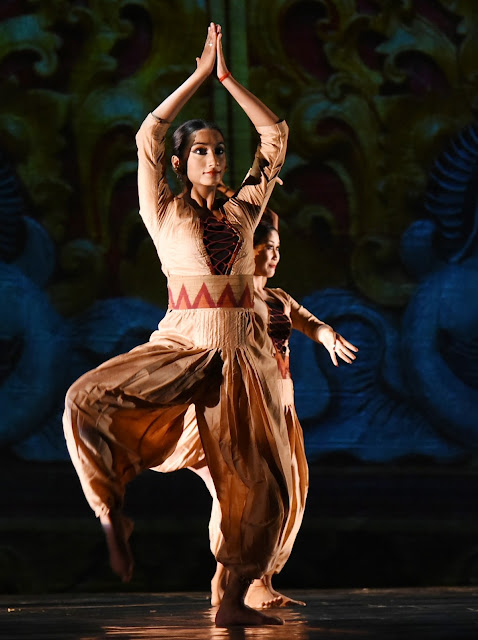 The production used multimedia in the backdrop to create the different spaces for the happenings in the tale. Against a red background was told this sad tale of human nature, destruction, dynastic politics and the tragedy of war. The background scene changed to a Balinese temple in the clouds with soft Balinese music playing, prominent among them the notes of the jal tarang. 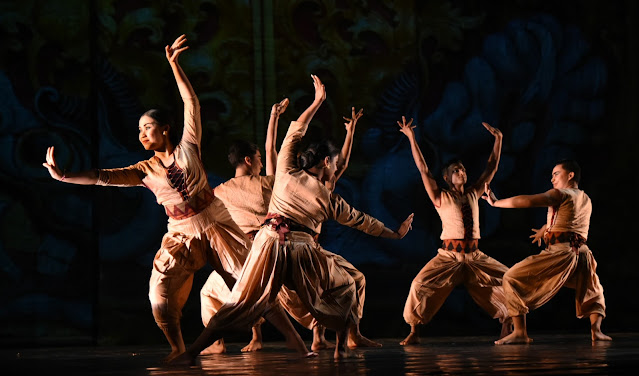 The dancers did the namaskar in various stances in a fusion of Balinese dance and Bharatanatyam. 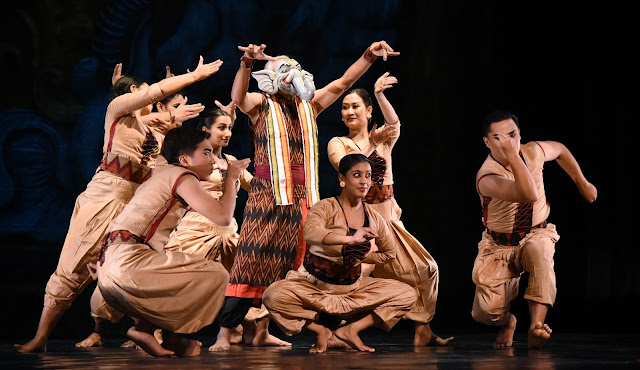 The Balinese dancers appeared in formations depicting Ganesha with his elephant ears, the weapons in his hands, his long trunk – vakratund and with the mouse as his steed. The gait of Ganesha as lambodaraye was well executed. Finally, the dancers offered a pushpanjali to the lord with a formation showing Ganesha with his broken tooth.The second section depicted the dialogue between Vyasa and Ganesha. It was Vyasa rishi who conceived the Mahabharata and dictated it to Ganesha, his scribe, at the suggestion of Brahma. 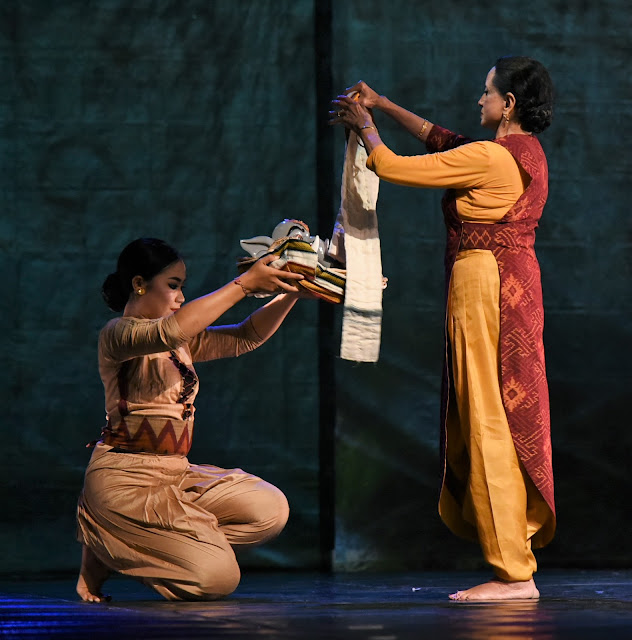 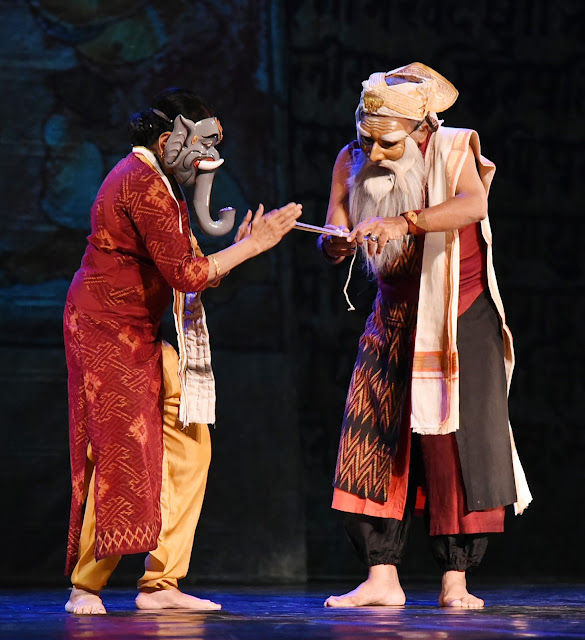 For this section, the Balinese masks were brought to the stage. The dancers performed the choreographed rituals that precede the donning of the ceremonial masks. It was as if the deity was being invoked by the dancer to come and descend into her or his body. The dancers depicted Ganesha demanding that Vyasa dictate without pause or hesitation, and Vyasa agreeing on the condition that Ganesha write only what he understood. Thus, Rishi Vyasa composed the Maharabharata and Ganesha wrote it as his scribe. 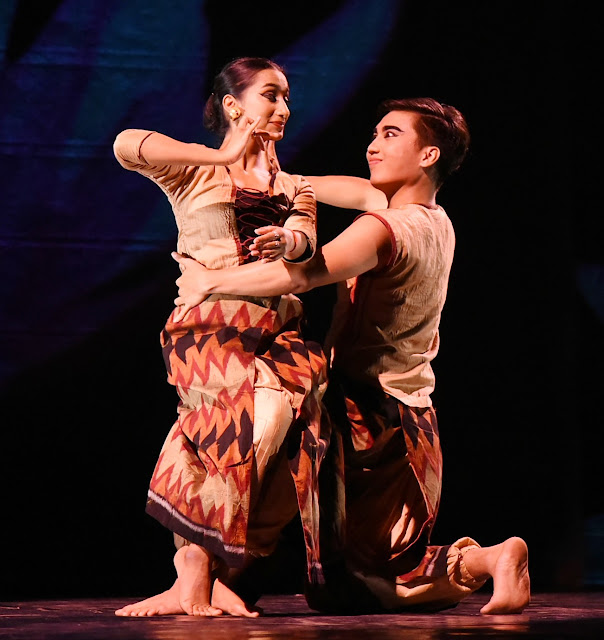 Then the Balinese dancers brought in the Brahma mask and the dancer donned it, again after following the ceremonial steps. Ganesha was seen writing on a patra, or leaf manuscript, in the background. He is writing as Vyasa narrates. The fear and the battle begin. Kurukshetra is like the march of materialism. As the background scene changes to manmade disasters, with no peace, love or joy, a couple of dancers danced in love, joy and reverence of each other. 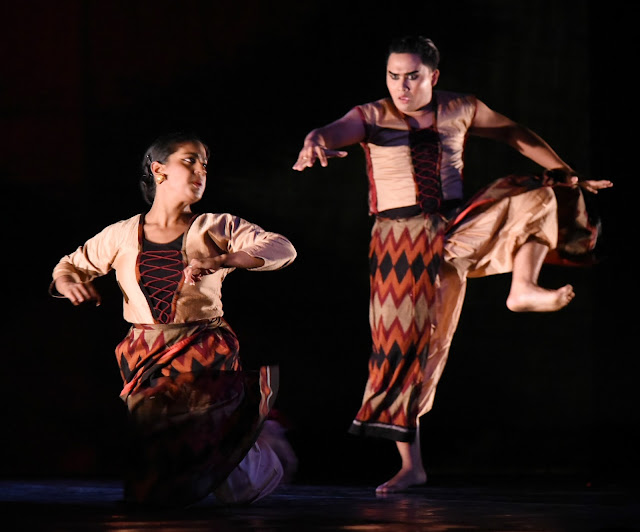 Another couple warred, rotating on their knees. The third couple danced in reverence of each other. The fourth couple, which included the Bharatanatyam dancer Parshwanath Upadhye, took very powerful, high leaps, readying to fight using the weapons or sharpening them, and rotating. 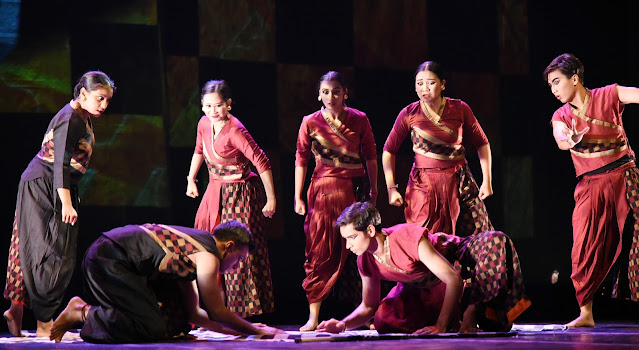 The following scene was about the game of dice. Draupadi is yagyasaini; she was born of fire, which was shown in the background. In casting the dancers, the choreographer made no distinction on the grounds of form or gender. Duryodhana, Shikhandi and Duhshasana were there for the last face-off. Shakuni was danced by Parshwanath in Bharatanatyam, Nakul by a female dancer. Duryodhana, in Balinese style with blinking, gleaming eyes, calls upon Shakuni in a violent, insecure manner to destroy the Pandavas not with weapons but with his wisdom.

The chequered cloth as the chess mat was brought out wrapped and then laid out to the staccato bols of Bharatanatyam. As Yudhishthira wins the first bout, the loaded dice are brought out by Shakuni. For the rest of the game, Shakuni throws the loaded dice and wins time and again. Here, the background had checks and dice with the very forceful padhant of Bharatanatyam bols to create that atmosphere. That was how the defeat of the Pandavas at the hands of Shakuni was shown. 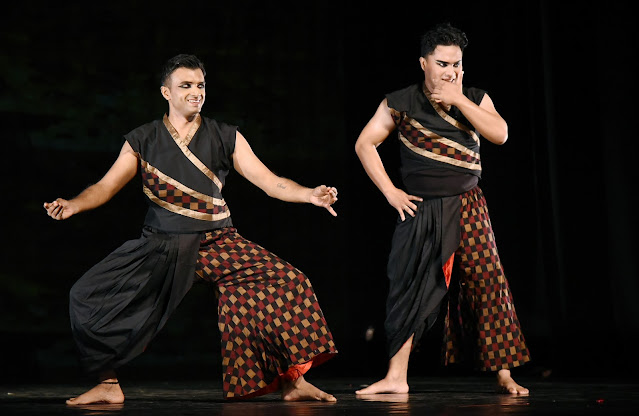 Parshwanath’s expressions and the rotations of his hands while throwing the dice were very impressive. 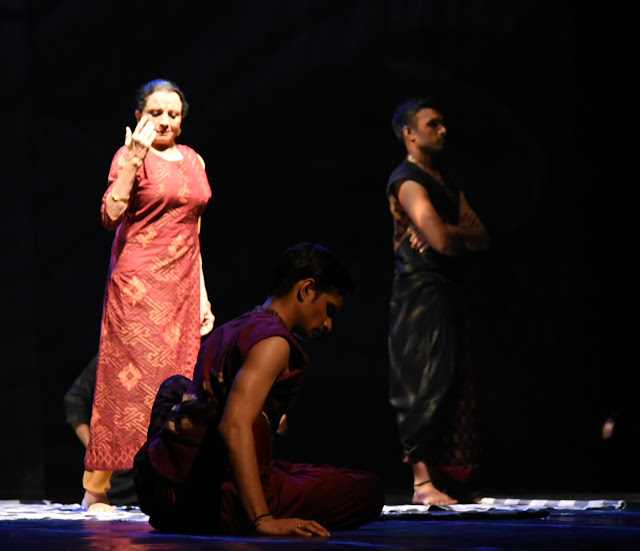 The next sequence with Draupadi was done in a very moving manner. Draupadi was shown through a screen as being derobed to an audio narration. The narration said that she would not tie her hair till they were washed in the blood of the wrongdoers and that a woman of five husbands should have been protected manifold; yet, she was treated like a whore, derobed, and included her cry that shame was not her lot: ‘How was I his to lose?’ The entire narration in the midst of the music, the conch and the gongs was very impactful. 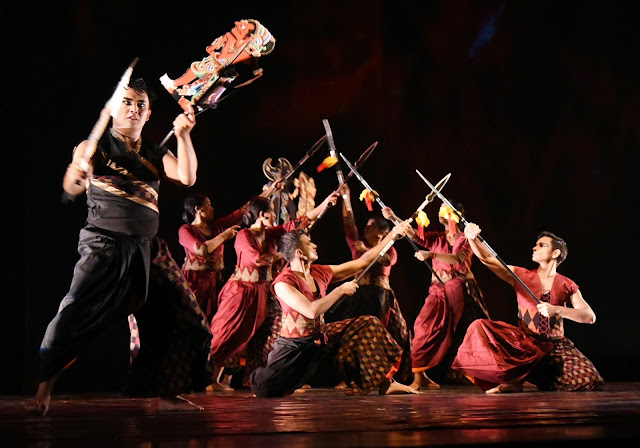 The war between the Kauravas and the Pandavas was shown using handheld puppets with spears and fire on the screen. Duryodhana and Bheema fought rolling on the floor with bows and arrows. Parshwanath and a male Bharatanatyam dancer fought with martial Bharatanatyam moves, handstands, sword fighting, rotation on knees and leaps. The background depicted grey skies with a solitary bird and in the end, Lata Pada and the Balinese guru ended the production holding white shrouds covering the dead, conveying the message that war brings destruction. 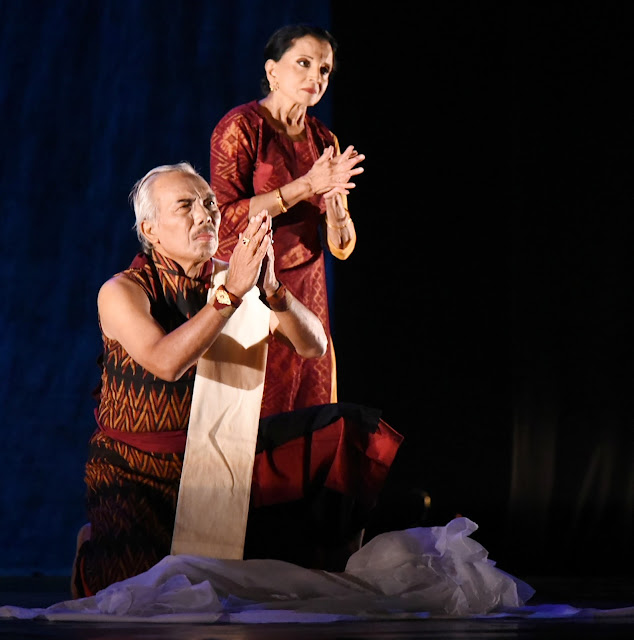 It is hard enough to develop a production in one form of dance, but using two forms of dance, which are quite distinct in choreography, music, rhythm and costumes, while ensuring that they do not clash in any way, merging smoothly into each other as if they were always meant to co-exist, is quite a feat. The multimedia and puppets were added on to the narrative and though the concept was related to the Mahabharata, it was made relevant to the present times as well. The dancing in both the styles was very strong, both in technique and in abhinaya. What left an impression on me was the expertise of the dancers and the rituals the Ganesha and Vyasa dancers did before wearing their masks.

At the performance, I met Sandhya Raman, the costume designer for the production, and spoke to her briefly:
‘Around 2 and a half years ago, Lata Pada came down to Delhi to tell me about the production and asked me to do the costumes. Once she was confident that I could work on the costumes, she asked me to be involved at the concept development stage. I was in Canada and in Bali, and also attended their rehearsals on Skype while she was choreographing. I saw the movements of the dancers and I decided that the textile that would go with both styles of dance was Ikat. Ikat would be the common thread between Indonesia and India and I made it my theme. Then I thought of ikat patterns in war designs and dice. So for the dice game they are in check patterns and for war, they are in angular patterns. I had given them costumes for Indonesian dance as well as for Bharatanatyam and maintained the individuality of each form. I had to suddenly change between the subtleties of the two dance forms. For the Kauravas and Pandavas, I had to understand the concept, movements and intricacies of each because I cannot just design randomly. The darkness of the Kauravas was there and the energies of the Pandavas was there.
(On the ritual of worshipping the masks on stage before wearing them) Since they had to pay due respect to the character, they worship the mask before wearing it. They could have worn them while in the wings, but doing it on the stage brings in the theatrical element.’
Pics: Anoop Arora
Email Post