In January this year, eminent contemporary dancer and choreographer Astad Deboo brought the production Unbroken Unbowed to Delhi with a performance at the Chinmaya Mission auditorium. It was the month of the martyrdom of Mahatma Gandhi, on whose life this production was based. It was also held in the days when the CAA and NPR protests were the primary talking point, raising issues of exclusion and intolerance. 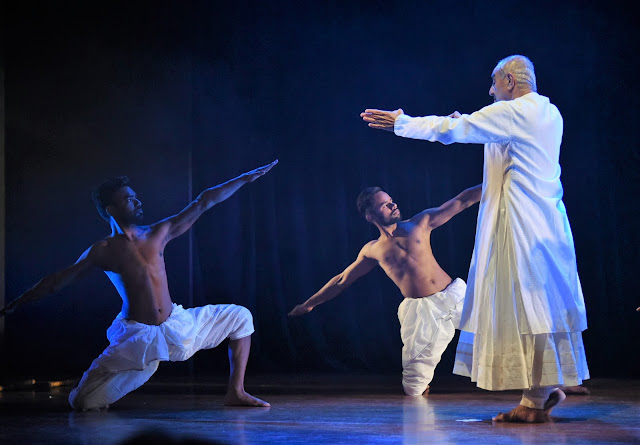 For this production, Deboo related four principles of Gandhian philosophy to his own life and worked in collaboration with young contemporary dancers. ‘The four quotes are pretty relevant today, with what’s happening in the country,’ he said right before the show. ‘The most prominent quote is, “It is easy to stand with the crowd, but it takes courage to stand alone.” You can see that’s what’s happening with students and in general with citizens – people are not agreeing with what's been passed. But these quotes are also relevant to my journey… Some of the selected quotes I relate to because (they reflect) part of my journey. “I’m very disappointed in educated people” – when I was trying to establish my work, I thought people would be open to accepting my work, but that’s where my disappointment was. My inner strength was in the fact that I could sustain despite the constant rejection I faced in the earlier part of my life,’ he said.
As for the name, he explained, ‘Unbroken, because I have not been broken in my 50-year journey, I have stuck to my ground, to being a contemporary dancer, though there was a resentment towards my work, and Unbowed because main kisike ke saamne jhuka nahin hoon.’ 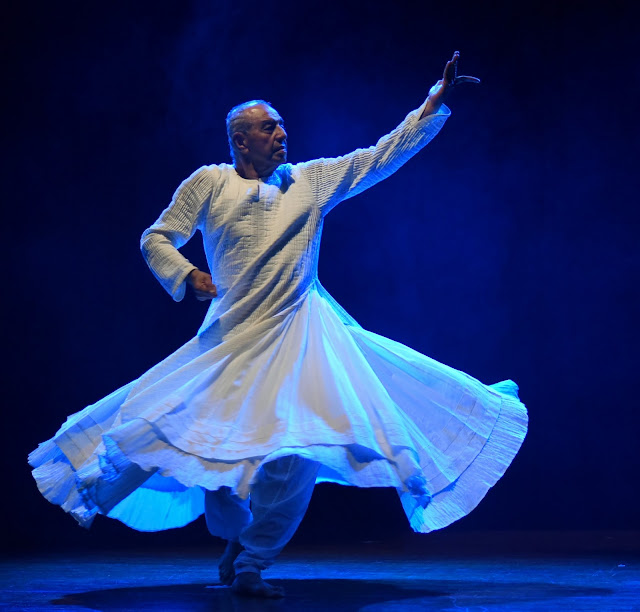 For the performance, he wore a white khadi costume in his preferred flared silhouette while the other dancers wore white dhotis. Interpreting Deboo’s movements is tough but through those movements, he weaves a tale which conveys his emotions very successfully. You just have to condition your mind and attune it with his movements, which are expressions of his mental state. The group of young men was agile and energetic and their dancing thoroughly choreographed and rehearsed. I saw the rehearsal too, when they worked with a perfectionist like Deboo, and could see the rigour in their rehearsals. Their leaps, strides and rolls all expressed the theme. 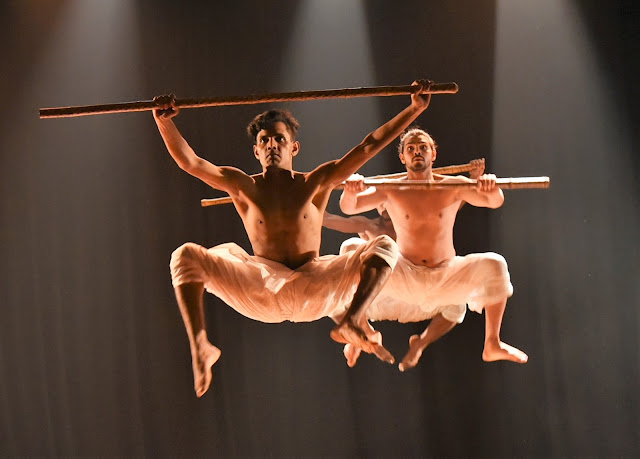 Rasaja Foundation hosted the production as a tribute to Mahatma in the 150th year of his birth. The white khadi costumes were all done by Sandhya Raman, secretary of the Foundation. The five quotes of Gandhi which Deboo used were ‘Relationships are based on four principles – respect, understanding, acceptance and appreciation’, ‘Strength doesn’t come from physical capacity, it comes from indomitable will’, ‘Nothing has saddened me more than the harshness of educated people’ and ‘It is easy to stand with the crowd, but it takes courage to stand alone’. Deboo said the quotes had all had resonance in his own life. 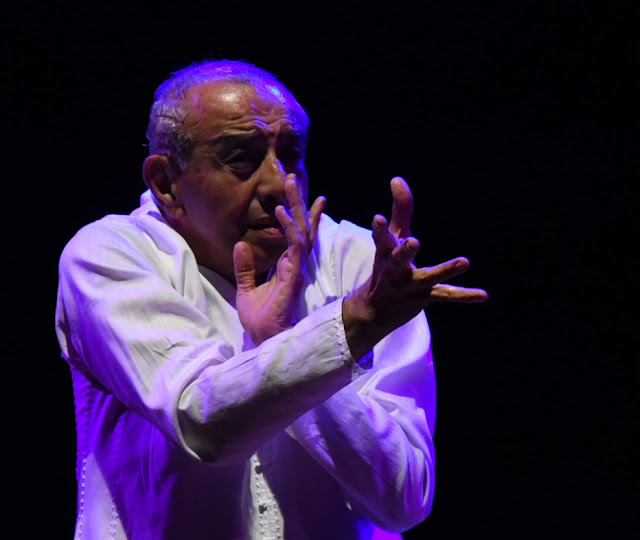 In the four pieces, Deboo stood in the centre of the stage, moving his hands and feet gently with the music, creating a centre of emotion to the tumult of the other dancers’ athletic dancing and narrating a myriad of emotions through his slow movements. Speaking the language of sadness, acceptance, indomitable spirit and courage, his white khadi tunic with swirled in his chakkars. The other six dancers did headstands, rolled rapidly on their abdomens from a foetal position, raised their feet and then stood with raised hands. 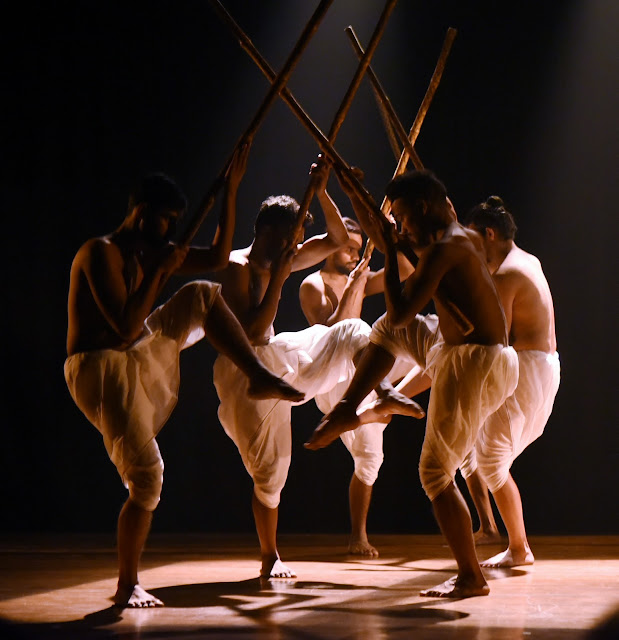 For the second piece, the dancers held bamboo sticks which complemented the general effect. They did jumps, cartwheels, squats and leaps, rotating the bamboos and finally rowing. 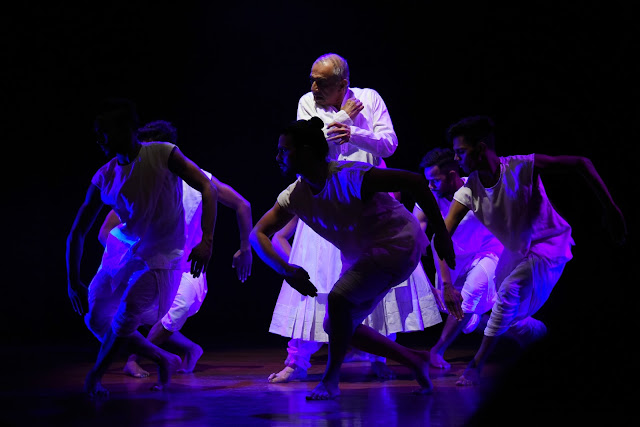 For the third piece, the dancers looked at him straight with their fingers locked. Their gaze was piercing and arrogant. As Deboo twisted his feet, his hands moved as if asking a question. 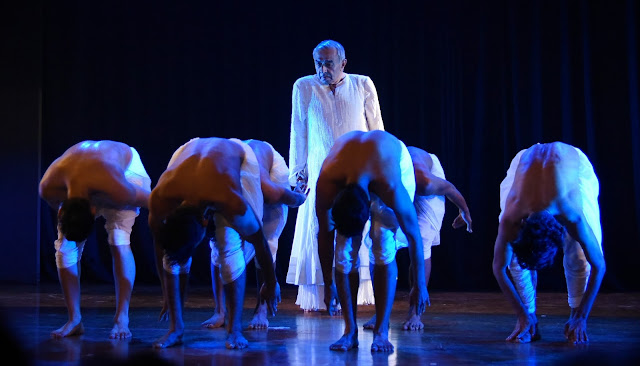 For the fourth piece, the six contemporary dancers moved around as if spying. After sitting down, they got up and moved up and down, crawled, rolled, heads up and down. They did cartwheels, moving sideways, throwing their hands around. Each of them performed a short solo stint with jumps, leaps and rotations, moving in a straight line doing headstands with Deboo in the centre, who moved with trembling hands and then went into his trademark chakkars. The entire performance then came to a crescendo.
When the performance reached its pinnacle, it was such a show of masculine energy – jumps, leaps, headstands, rolling with the thudding of the bamboos – that the impact was amazing. Finally, each one walked in with one part of the face of the Mahatma. They all came together to complete the installation and took their bows. 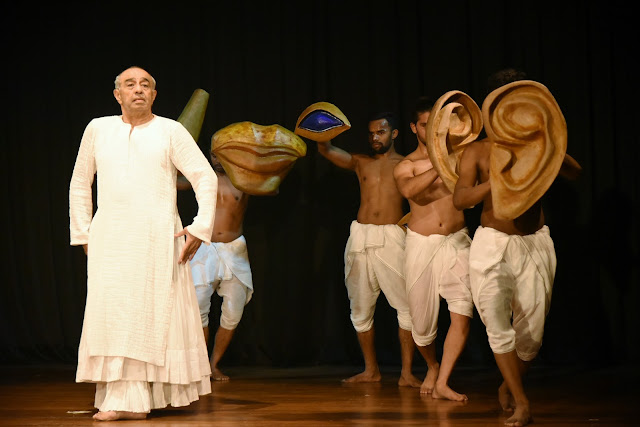 The installation had been designed by one of the dancers, Shamsul Shams. ‘I had a lot of ideas for the mask and I told sir that we could have a mask for each one of us, and one for Gandhiji. He said he did not want so many masks, just one, beautifully made. It should be 40% abstract and the rest like Gandhiji, he said. I designed a few and made sketches. He approved a few with some changes.' 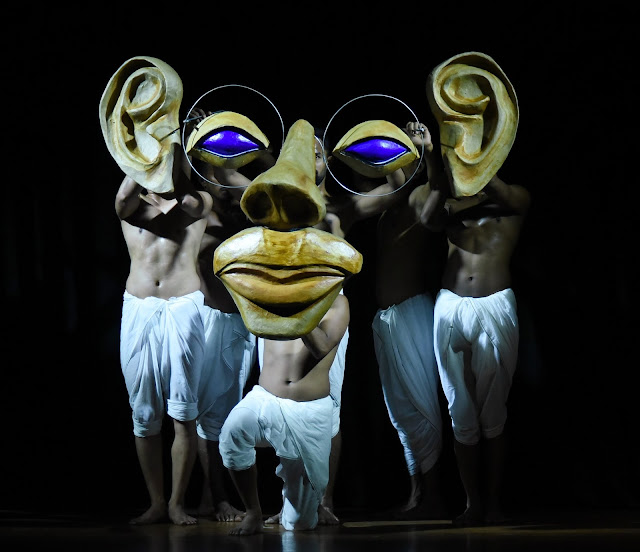 'The one that was finally chosen I made with styrofoam and papier mache. But then the problem was how we would assemble these parts on stage. We did rehearsals to bring it together. The entry was planned with the dancers carrying the various parts and then putting them together. I personally thought it was done very aesthetically, coming together to form the face,’ he explained. The eyes were blue – I asked Shamsul the reason for that. ‘Sir did not want it that way, but I thought that blue stands for calm and purity, so I should make them blue.’
About the costumes, Sandhya told me, ‘When he (Deboo) came to me, I told him to have trust in me, I will work with khadi. I thought (the costume should reflect) how he talks about layers in his emotions and that he is standing alone; I thought about silhouettes. That’s how I designed for him. The boys we decided would be in white khadi dhotis. The dhoti was also tied in the Gandhian manner, above the knees. Since Astad is trained in Kathakali as well, I used two layers for his costume. We wanted to keep it simple and let the dance speak: very simple, no fancy stuff and very beautifully, intricately finished, minimalist. The second section had a two-layered costume and the third had a three-layered one. It was the same costume with added layers rather than a costume change. In the last section, when Gandhiji is emerging from all the conflict, the purity of the white costume was significant. Khadi is rare in the performing arts, but a costume that Astad is wearing should have a soul. It should be an inspiration.’ 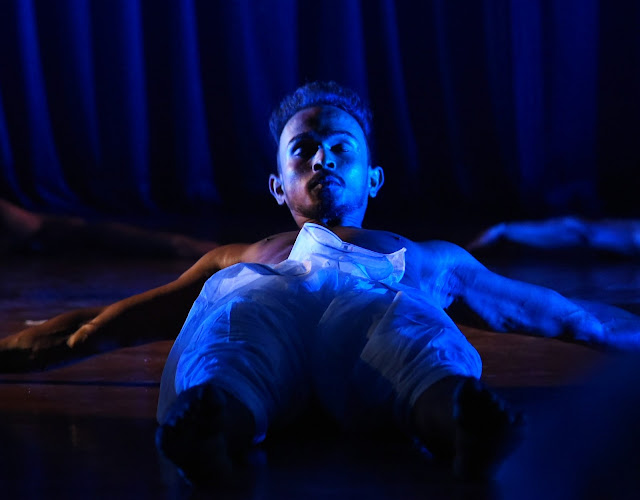