Aditi Mangaldas held a workshop on Kathak at the Oddbird Theatre Delhi earlier this year. The venue was an unusual one for classical dance, tucked away as it was in south Delhi. Oddbird is in Dhan Mill in Chhatarpur, which has been developed as a complex for art, design and upscale brands. The main topic for the workshop was ‘exploring the spine’. I could not attend one day out of the two but I am trying to summarize as much as I can for the benefit of readers. When I reached the afternoon session on the second day, they were revisiting and revising what they had learnt in the past two days. Now it was time to learn the bols and the patterns of the complicated paran-aamads.

Afterwards, I spoke to Aditi about the workshop.

Q: In your style, would you want the students to learn first and then write down the bols, or the other way around?
A: I think in movement and I make my own bandishes. I always think in movement: how will a movement transform into a thought in the mind, what bols will be made and how many spaces I need to expand it to. Students should first get into the rhythm of the piece and then dissect it totally. They should first be able to speak it aloud and then fix the footwork. Go very slow at first; slow, fast and then very fast. Then fix the skeleton, musculature and gradually bring in the speed that feels right. During this process, when you can recite it, you can write it down. But writing is important, though you should get the bols first.

Q: There is a lipi of writing down the notations for the Kathak pieces. Is that what you use?
A: I write it in my own way and I let them write it in their own way. I make all sorts of images in my notes to give me a sense of what comes where. I tell my dancers to write it straight and not with the notations. For instance, when I had to write ‘tig da dig dig thai’, I used to get so bored of writing ‘tig da dig dig’ each time that I symbolized it with a cross. So my writing would be ‘x thai x thai x thai’. I was very amused to see one student make a little drawing of the movement on notes. That’s exactly what I have to do sometimes when the movement is new to me. 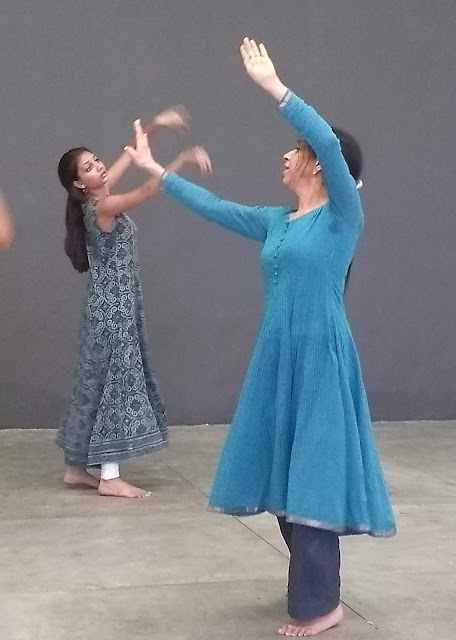 Talking about postures, she said that sitting straight is more relaxing than slouching. It helps to keep your spine straight. ‘The impulse is in the body and you have to discover it,’ Aditi said to the participants. ‘When you are shifting weight in a chaal, you are able to do it, but in nritta, it is difficult to shift your weight from one foot to the other.’

As she proceeded with the pieces, she explained that the movements have been flowing down from generation to generation, but there are many little things that can be changed. And this change depends upon the dancer, upon the body dancing, upon the dance form and upon the original movement.

Q: In your pedagogy, I see the influence of Kumiben (Kumudini Lakhia) more than of Maharaj ji (Birju Maharaj). You give so much movement in different directions.
A: Maharaj ji also used to add a lot of movement. So it comes from him too. But the expanse of the movement – some things are my own too because I would hate to be a good copy; I’d rather be a bad original. From Maharaj ji, I learnt the choreography of the body itself. The movement should flow from the centre of my being to the rest of my body. What I learnt from Kumiben was the choreography of the body in space. I am fortunate to have these great gurus and of course, sometimes I twist things myself.

Q: Since you add a lot of expanse to the movement, it adds a lot of dynamism to your Kathak – the general perception of Kathak is a dance form with linear movement in a straight line.
A: This is exactly what we were discussing on the first day – if you take a cube and have only one way of looking at it, it will look like a square. If you offer different ways of viewing it, it looks different and you can add dimensions. 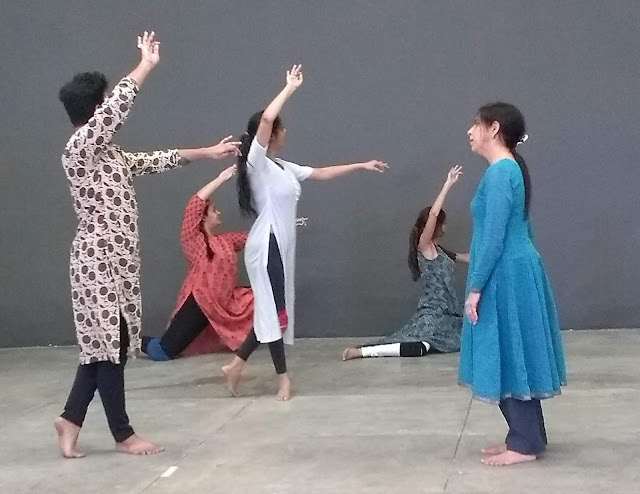 She then went on to give them the movement for the paran-aamads, parans and aamads, adding a lot of expanse of movement in different directions, and concluded the workshop. The spine, she said, should be considered to be made in parts which can be twisted separately.

I spoke to one of the students, who was from Lucknow. ‘It has been an enlightening experience,’ she told me. ‘It is a modern way of looking at a traditional dance like Kathak. Or you could say it’s another way of looking at Kathak. The movement of the body is traditional Kathak and the movement of the body in space is modern. In my learning experience, I have not come across anything like that and it has been an amazing experience… I have always wanted to learn from Aditi didi, since I have not come across any other guru who has taught the movement of Kathak in a modern way. The way she teaches us to move in space is very different. This modern perspective attracts many young minds. It has helped me raise the bar for myself to a professional level. The bols are the same I have learnt in my Masters in Kathak, but the movements are more contemporary and attractive. We were taught certain exercises so that our thought process, our bodies and even our internal organs change and move in different ways. I wasn’t aware of this idea of exploring the spine. It has been a dream to attend these workshops and it has helped me work on myself.’ 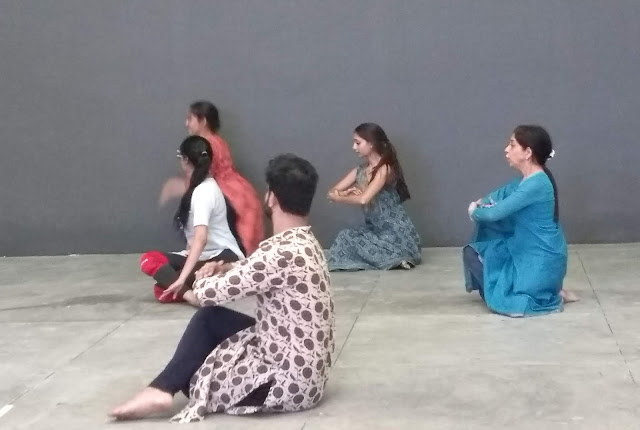 I spoke to Aditi in some detail about her style and what she hopes to communicate through such workshops.

‘I started training with my guru Kumudini Lakhia at the age of five,’ Aditi told me. ‘It was her influence and teaching and my family’s, which is very liberal about any idea – discussions, debating, questioning, disagreement are always encouraged. In fact, nothing was set in stone. Kumiben said that whatever was written down was only for reference in context and was open to questioning.
‘The workshop was more of a demonstrative one so it is difficult to talk about it. If you look at the muscular structure, you need to understand where this movement has originated from. People talk about Kathak as a two-dimensional form since it is danced two-dimensionally. If you see a piece of cloth, it is two-dimensional. In fact, anything can be made two-dimensional. As I said earlier, if you look at the side facing you only, it becomes two-dimensional. But if you lift it slightly, it becomes three-dimensional. If your view of the dance is narrow, you will think of it as two-dimensional, but the third dimension exists. If you see a paper in a particular way, it will appear like a line. It is about your perspective. I am among the many people who have tried to explore the dimensions of Kathak. The spine gives the three-dimensionality. What you see on the surface is two-dimensional, but no, it has a third dimension. You have to learn to work with the structure, first with the skeletal structure, then with the muscular and finally the nervous system. You have to breathe life and emotions into your dance, otherwise it will be like dhadam dhadam, dance without any meaning. These are the various dimensions that can be given to dance.

‘I think Kathak is not linear. The opening stance or thaat is linear, but the breath makes it dimensional. It is not a statue standing there, it is breathing.Through this workshop, there are some small things that dancers can start thinking about while they dance, and if they do dedicated riyaaz, it will make a difference. They have to find their own way. I can only share an experience, a method. Many of them wrote back after a previous workshop, saying that it helped. You cannot learn in a workshop, but it can help to give new perspectives. I learnt by watching Maharaj ji and Kumiben taking other dancers’ classes. Observation was my tool, so these dancers can learn by observing their own selves.’