Refreshing family time and spiritual visits in Ooty and Coimbatore

Last autumn, it was time for our annual vacation with our family, destination Ooty and Coimbatore. When we go out, we try to fit as many places into our sightseeing schedule as we can.

The drive from Coimbatore airport to Ooty is through  forests area,, fields and quaint villages. Our resort in Ooty is located on a hill above the race course. It’s a sprawling British-era resort, nice and cosy in the autumn sun with many flowers. 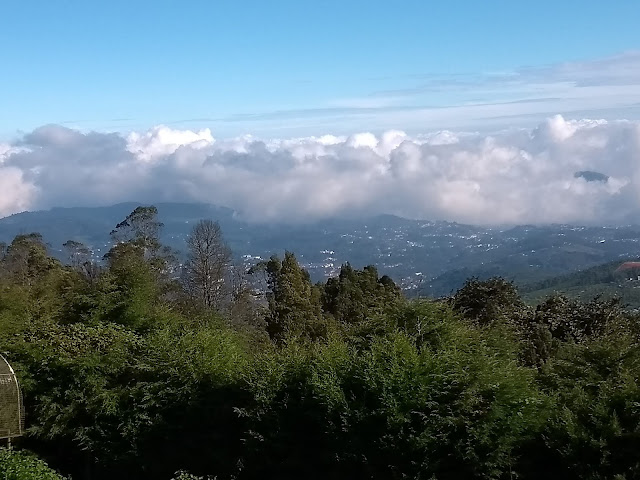 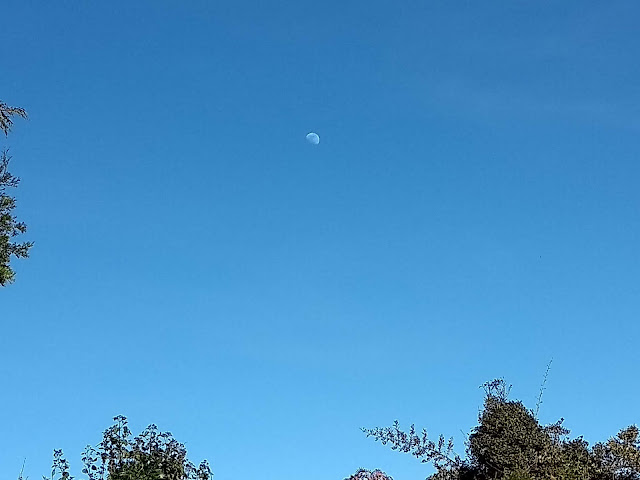 First stop: the Doddabeta peak has a cluster of trees on top and the view of the town of Ooty below is wonderful. On the way back, I happened to see the moon in the afternoon. It was a memorable sight. On the way, we  stopped at the local Botanical Gardens. The greenhouse with ferns was well-maintained and had many beautiful, exotic varieties of ferns. The lawns were thoroughly manicured, with very well-groomed hedges. Another hothouse had thousands of varieties of colourful flowers, including some very rare ones. Outside, there were cacti which were pretty old and exotic. A fossilized tree trunk was mounted on a platform. I wish I were able to see the rings in its trunk. 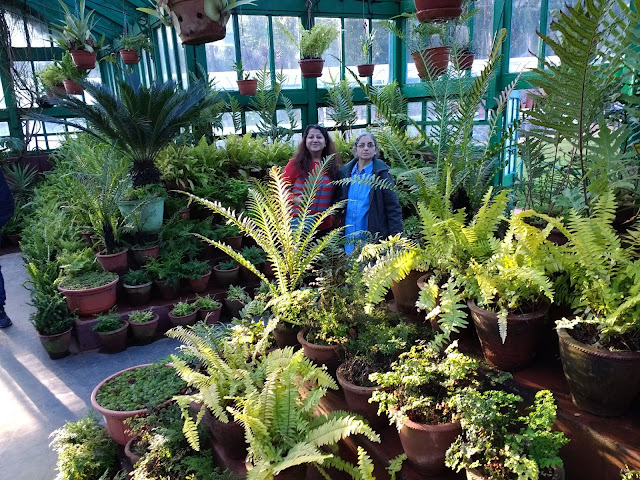 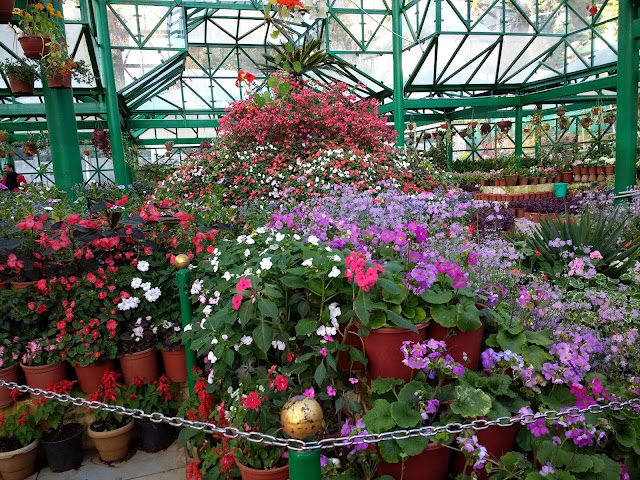 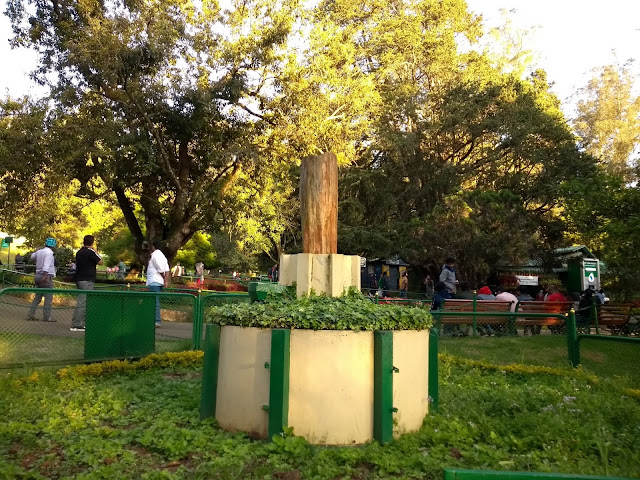 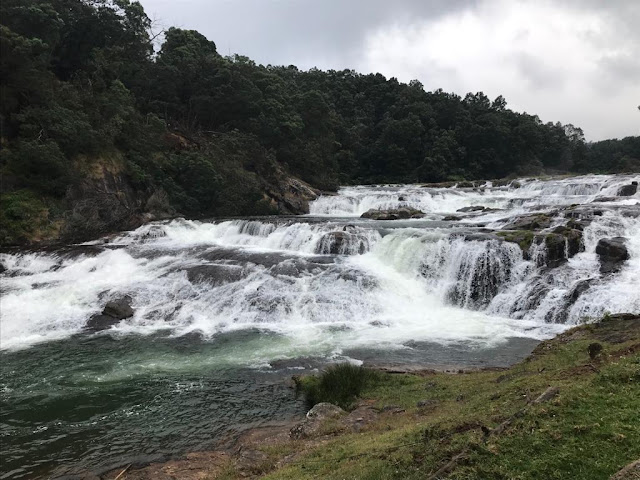 The next day, we started off on a day trip around Ooty. The first point was the pine forest. On a slope, the huge pine trees rose to great heights. Some were quite old. The edge of the forest was an emerald lake. The pristine beauty of the place was being spoilt by the human visitors who threw packets and other trash in that beautiful place. The next destination was the Pykara lake, a serene, placid, huge lake. You can take a boat ride on the lake. It inspires awe by the enormity of its size. Nearby, there were also the Pykara falls, part of the same river and dam system. This was slightly downhill and required us to climb up a slope, then down a few steps, but what unfolds before you is a huge fall flowing down in steps. There are no words to describe the beauty and enormity of the falls. So I thought it would be best to stand and remember one of my favourite songs – ‘Yeh kaun chitrakar hai’ in Mukesh’s voice. 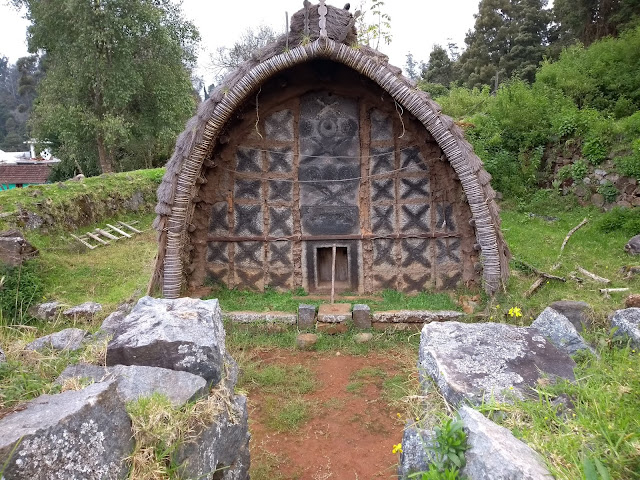 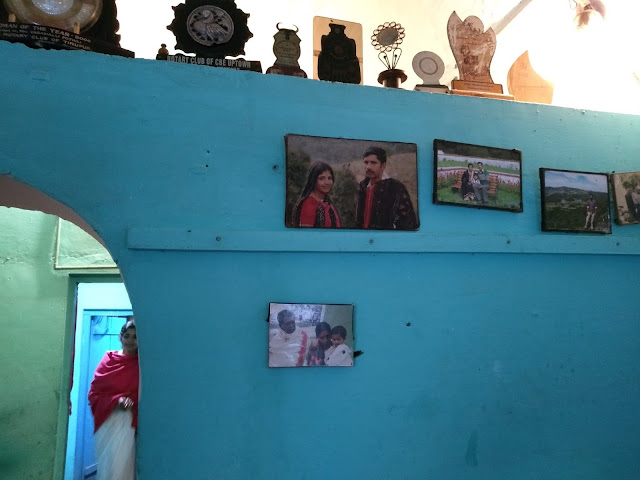 On the way back, we stopped to see the homes of the local tribals. These houses were oval in outline, rather than rectangular or box-like. A few feet away were their temples, which they have made according to their tradition in grey stone. These again left you spellbound and the carvings on them reminded you of some ancient practices. The woman who showed me her embroidery pieces has been awarded for her work by the local Rotary club. 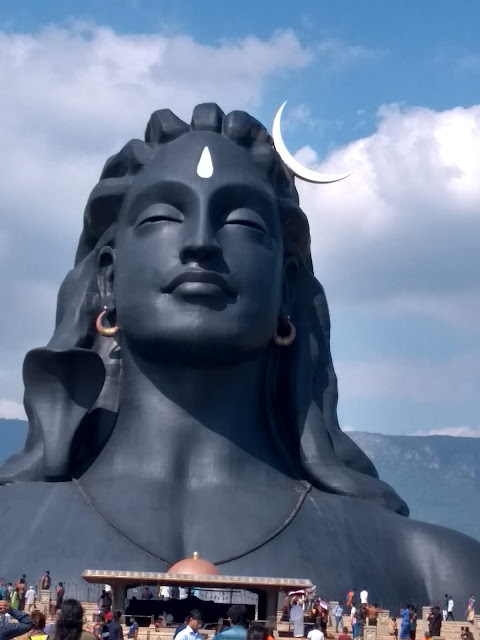 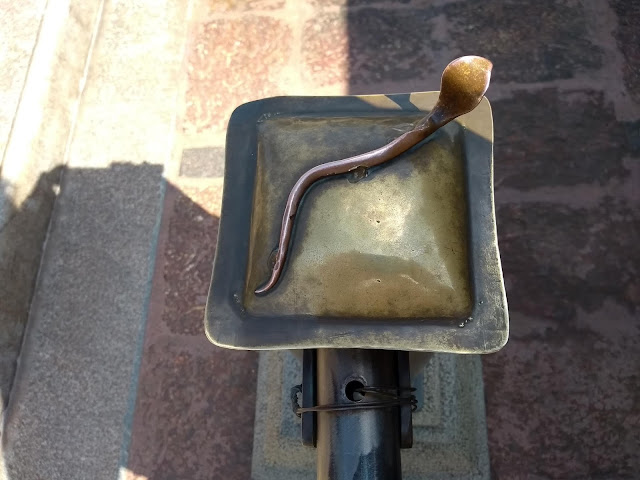 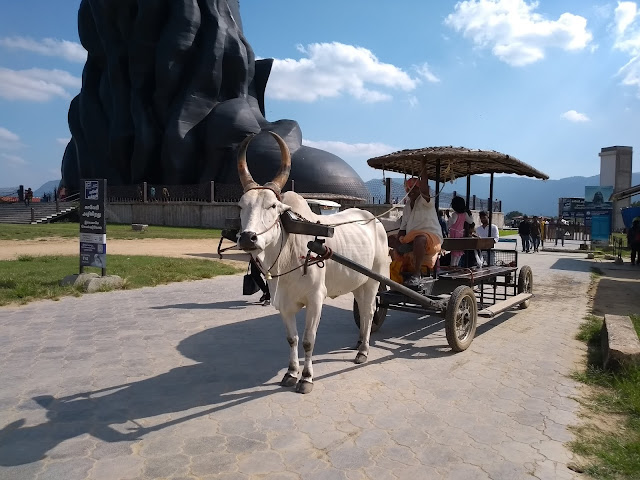 The next day we drove back to Coimbatore. It was the same long journey through lush green fields on both sides. We stayed at the Lemon Tree hotel. The next day was memorable since we went in the afternoon to Sadhguru’s Isha Yoga ashram. As you enter, the ambience of the place sucks you in. You arrive first at the Adiyogi statue and your jaw drops at the first glimpse. It is huge: 112 feet tall, all in black, with the eyes shut. Only the moon is in white and the tilak on the forehead. The dhyana mudra with the closed eyes is really impressive, the serenity on his face makes you calm and it is an experience to view it. 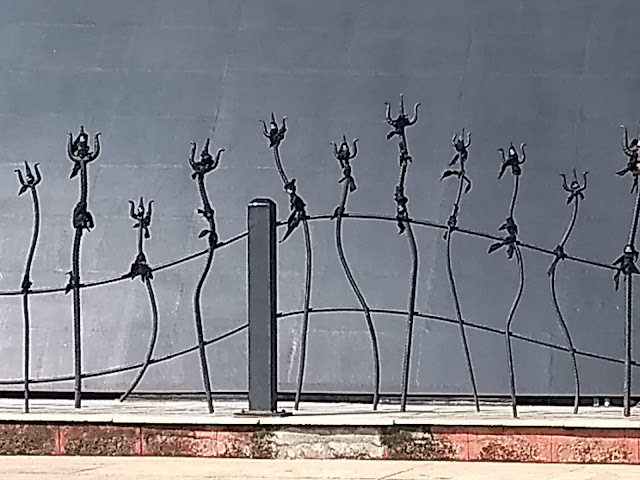 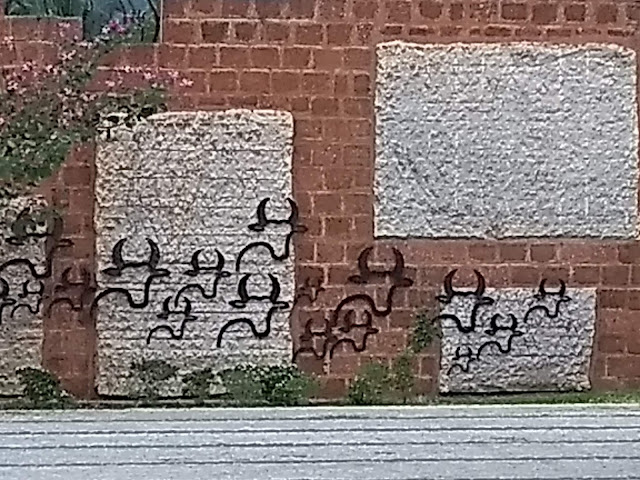 A few small additions in construction were also noteworthy: the Adiyogi statue’s boundary, made of trishools, the small snakes in the design of the railings that surround the pooja area. In front of it is a small cordoned area where there is a shivlinga and you can sit to meditate to the chanting of Shiva’s names. From here, there is a long path going to the Dhyanalingam. The path can be covered on foot or on a motorized cart. But a bigger attraction is a bullock cart, whose bulls are all decked up. On the way are the Suryakund and the Chandrakund, two separate tanks for men and women to bathe in. 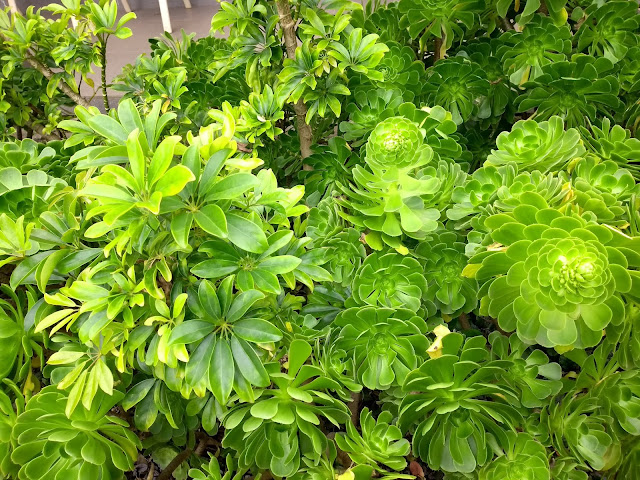 The Ling Bhairavi temple is on one side of the Dhyanalingam and was closed at that time. The Dhyanalingam complex has a massive Nandi sitting outside the dome-shaped structure made of bricks. A flight of steps leads to the area where you wait for entry. A few people are allowed inside at a time and inside, they are asked to sit for meditation around the linga in absolute silence. They even tell you how to try to meditate, but the aura inside is such that all thoughts leave your mind. One can offer lotuses or lamps in the small moat around the linga. And then you just sit and surrender till you are asked to move. They also offer free yoga classes at fixed times. In front of the temple area is a sculpture of a prostrating yogi. 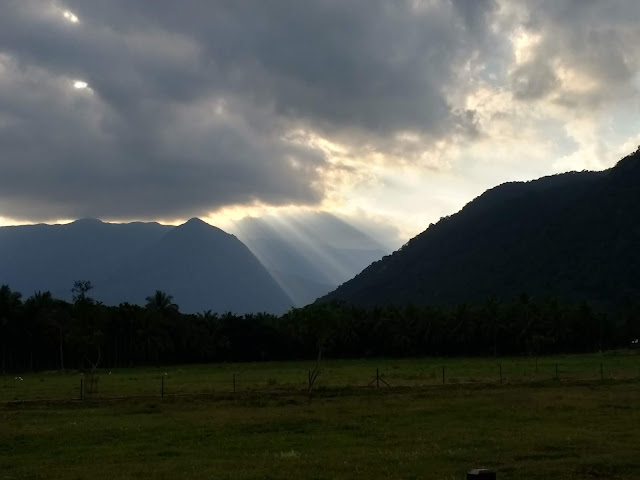 We started our journey back and visited the well-stocked Isha products store on the way. After some refreshing fresh coconut water, coffee and banana chips, we left. On the way back, we suddenly realized that we were standing in the valley among hillocks. The rays of the setting sun sliced through the evening clouds. Heavenly.I would want to spend more time here if sometime . 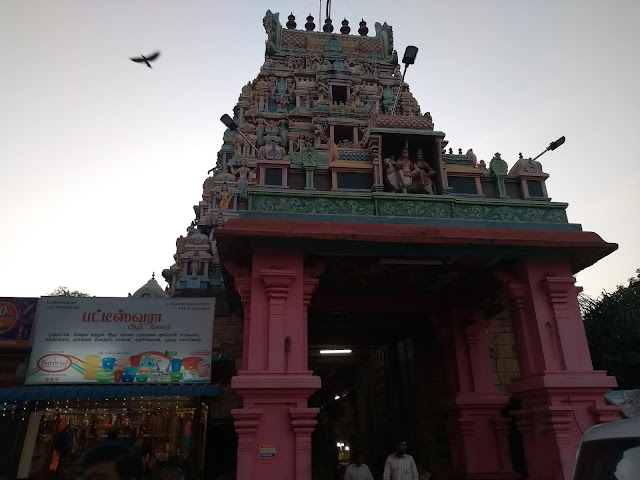 Going back towards the city , we visited the Perur Patishwara temple. It is an ancient temple with some sculptures, very intricate and ancient. The darshan was also an experience.
Email Post