Bharatnatyam dancer Shreyasi Gopinath gave a margam presentation in Bharatnatyam at IIC in Delhi. Shreyasi is an accomplished young dancer and her stage presence is very effective. 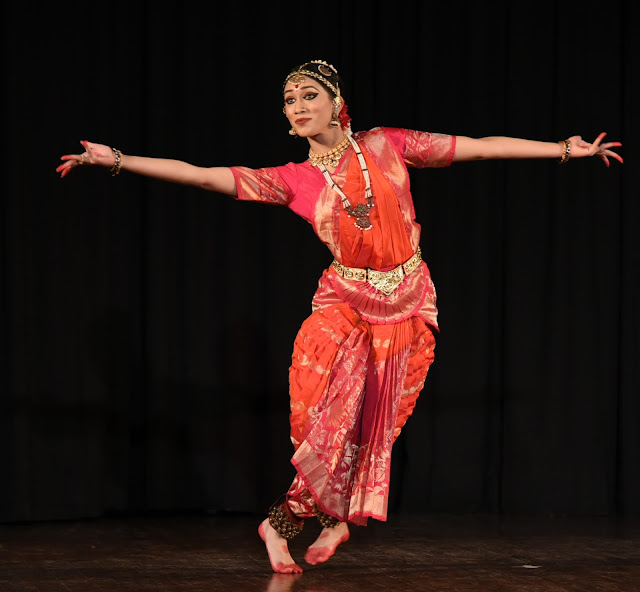 Shreyasi began her Bharatnatyam training under Guru Saroja Vaidyanathan, continued at Kalakshetra in Chennai, and is currently training under Guru Jamuna Krishnan. She has been learning since the age of seven and is now teaching and performing, both. 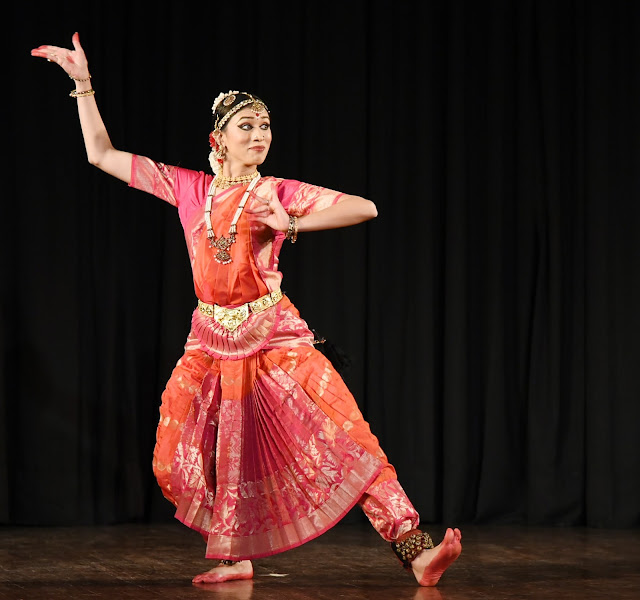 For this evening’s performance, the stage was bedecked with flowers. Shreyasi began with an invocatory pushpanjali in raagam Arabhi, aditalam, composed and choreographed by Guru Jamuna Krishnan. She offered the flowers to Nataraja. The nritta, footwork and expansive movements had a lot of precision. Her red costume added to the brightness. 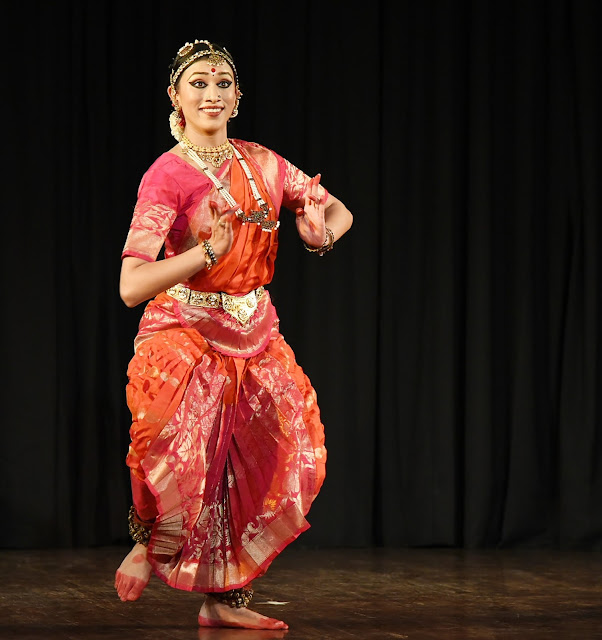 Guru Jamuna Krishnan has done an in-depth study of bhakta poetry and has successfully converted a lot of it to varnams, lending the pieces great aesthetic richness. This varnam was a composition from Sursagar by bhakta Surdas in raagam Yaman, aditalam. Surdasji plays beautifully with words to describe the beauty of his ishtadev, Shri Krishna. 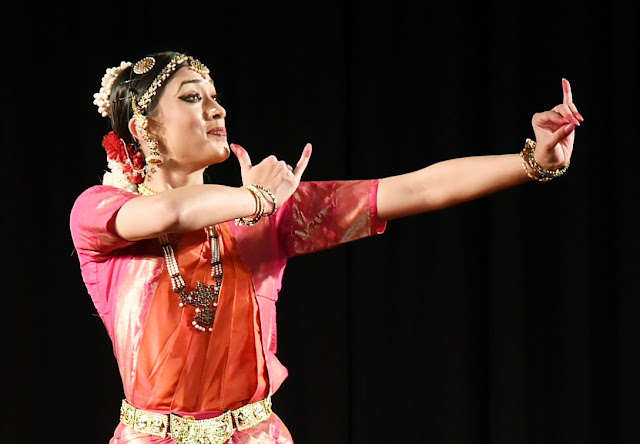 Lord Vishnu was depicted with his four-armed stance, carrying gada, padma, shankha and chakram, his conch-like neck with the vanmala and the kaustubh mani on his chest. The lyrics of the poetry said ‘Giridhar muralidhar brijdhar peetambar dhar, dharani dhar’. The vocals were very melodious and Shreyasi, with very smooth movements, depicted giridhar on his little finger and bansuri through varied stances, followed by leaps and footwork in the jatis. Kachhapavatar was depicted for dharanidhar, and besides that, mukutdhar, adharsudhadhar, kambhukanthadhar, kaustubh manidhar, vanmaladhar, muktamanidhar were very lyrical words which were artistically depicted. The conch stance for the neck, the morpankh on the mukut, the shine of the mani and the jewellery is blinding. 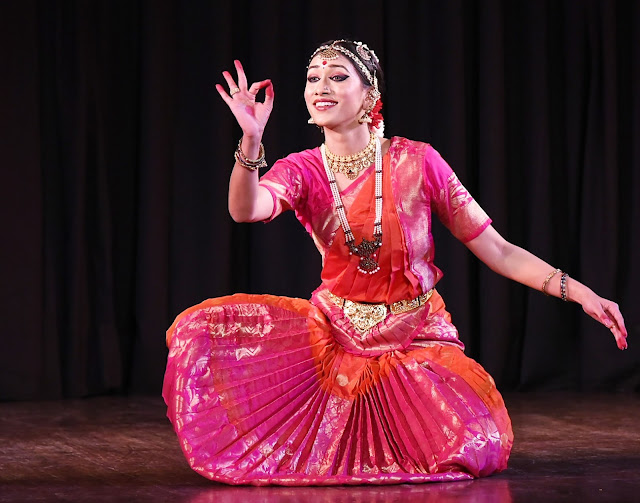 This was followed by the depiction of the stringing of the flowers for the vanmala and finally, the stance for Kaliadaman. In the next part, the composition used was ‘Prabhu tum deen dukh haran’, using powerful nritta and leaps in the bansuri stance. In the Sudama incident, where Krishna runs to embrace his friend, the energetic, wide movements were used effectively for complete stage coverage. The Draupadi incident was depicted, where Duhshasan is pulling the sari and finally, sweating and falling, is defeated when Krishna comes to her rescue. 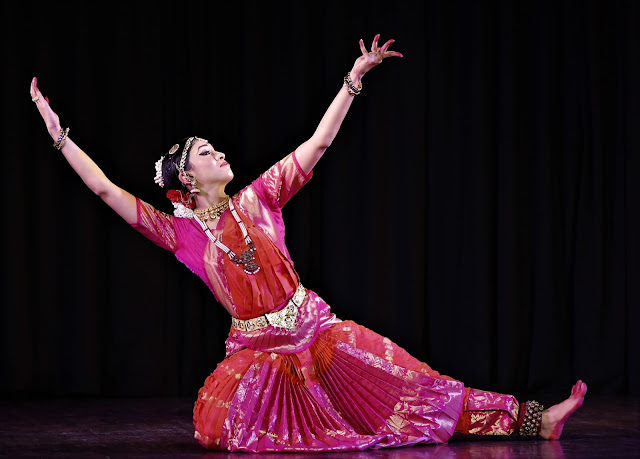 Shreyasi is a dancer with very chiselled movements, with a lot of accuracy in her hand and feet movements. Her movements are also very expansive, and the abhinaya too is executed well, especially the mukhabhinaya. It’s always a pleasure to see her and her guru’s choreographies. 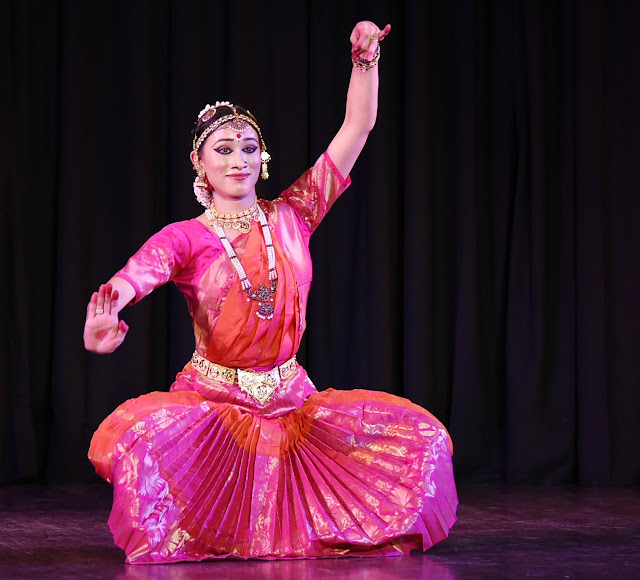 I had to leave at this point, but to narrate the entire repertoire presented - the next piece was a javali, where the young nayika pleads with the Lord to come to take her as Manmatha is tormenting her with his arrows. It was a composition by Pattanam Subramanya Iyer in raagam Kamas, set to aditalam. Finally, there was the thillana in raagam Kadanakoothuphalam set in aditalam, composed by the late Dr. M. Balamuralikrishna, choreographed by Guru Jamuna Krishnan. This thillana had been presented by Shreyasi at the Murali Samarpana Festival organised by Usha R.K, reported earlier in this blog. The Aarabhi Pushpanjali had been composed and choreographed by Guru Jamuna Krishnan, as had the varnam. 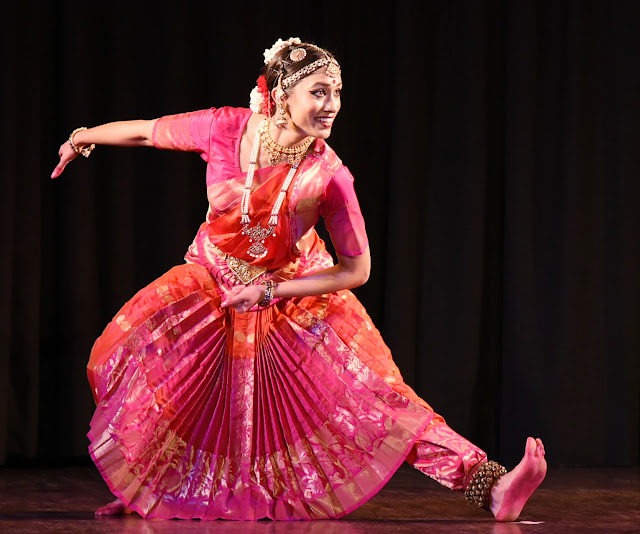