On the 28th of December, photographer Inni Singh launched his calendar. Inni Singh is a businessman and trained tablavadak who started photographing classical dance and music some years ago. He has been launching a calendar of portraits of dancers and musicians for a few years now, which features stunning photographs. 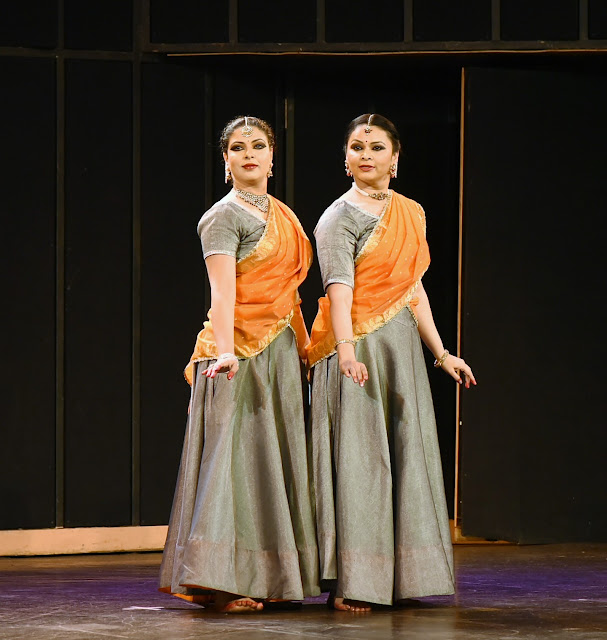 The launch was held at the Stein Auditorium. With events like this, where there are so many invitees, one has to face the mayhem at the entrance. Too many people were keen to get in, and the management and staff were at loggerheads with them. 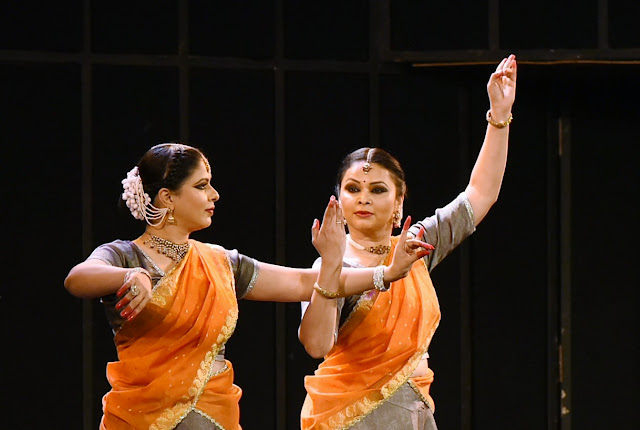 The evening started with dastangoi, following which there was a duet between the two shining stars of Kathak in Delhi. The two have really done their gurus proud and won the hearts of audiences all over the world. Gauri Diwakar and Vidha Lal, the two stars, came together for this launch and a lot of brilliance was expected. 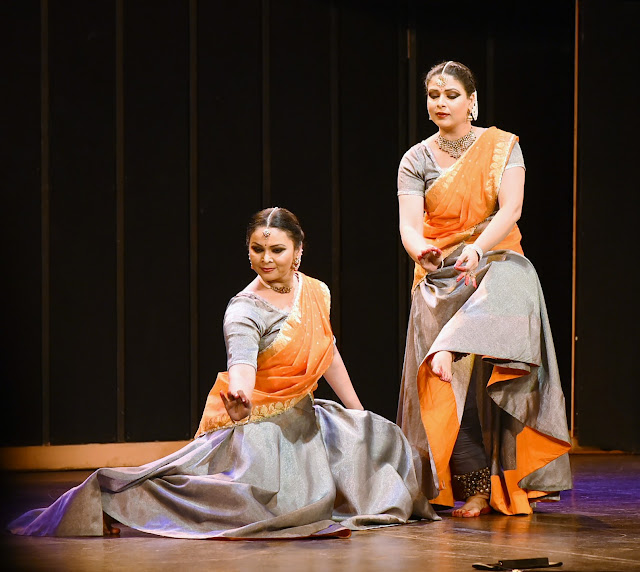 Gauri began her Kathak training under Smt. Sumita Chowdhary in Jamshedpur, and continued it in Delhi under Pt. Birju Maharaj and Pt. Jaikishen Maharaj in Delhi. She has also worked extensively under Aditi Mangaldas. Vidha is the disciple and daughter-in-law of Guru Gitanjali Lal. Both are seasoned performers and masters of their craft who also teach. Vidha is from the Jaipur gharana while Gauri is from the Lucknow gharana. Getting two such established but different dancers together was a coup for Inni Singh.

The first piece for the evening was a bandish, ‘Poojan chali Mahadev’, which they did together. They wore grey costumes with orange dupattas. Parvati Ma is heading to Mahadev pooja. ‘Chandravadani, mriganayani, hansagamani’, say the lyrics, and the two dancers used twisting feet and thaat, gestures and stances, for the depiction. ‘Pushpan ke gundhe haar’ was depicted, and then Shiva’s attributes were depicted – ‘jata Ganga, damaru trishul agni’ in one hand, with powerful nritta, footwork and stances, followed by tihai and gat. The nayika is described with solah shringar, maang tika, bhaal bindi, shvet pushp kesh gundhaye, kundal, kangan, karadhani, payal, mehendi, using very graceful movements. Finally, the dhoop, deep and aarti were depicted. This movement left an impression as the two swayed and performed aarti, and then as Vidha depicted holding the deepak, Gauri with one hand, dispersed the aura of the aarti. A very serene movement. 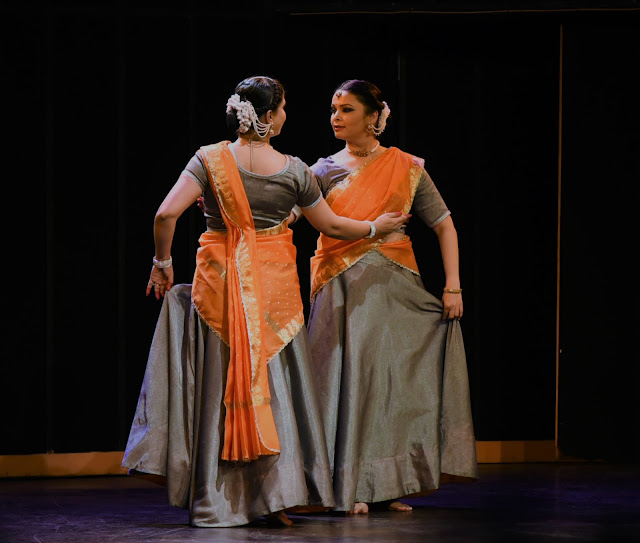 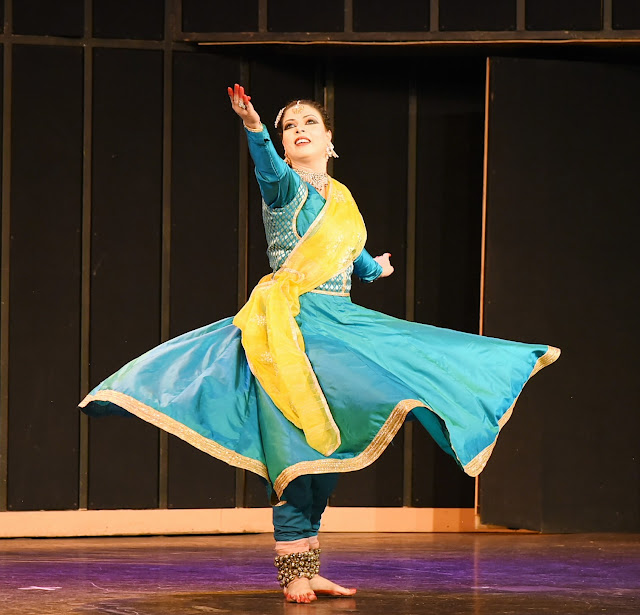 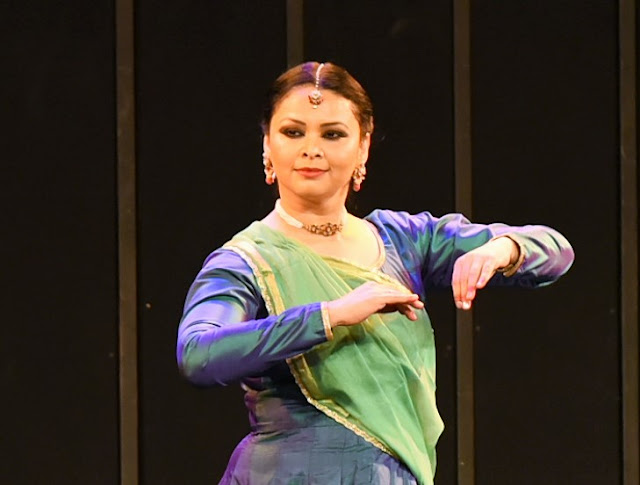 This was followed by solos in nritta. Gauri performed to gyarah matra and Vidha performed to nau matra, both exhibiting their technique, perfection, footwork and hand movements, using parans, tukdas and todas. 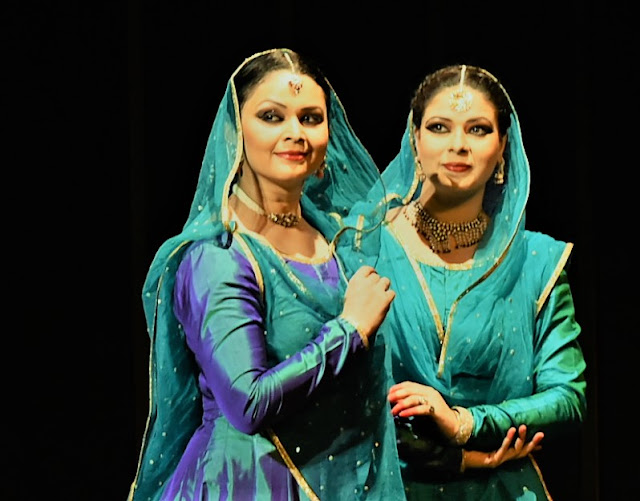 The last piece was again a duet to an Amir Khusrau composition, ‘Ae ri sakhi’, wonderfully choreographed, and together, they created magic. Their costumes, turquoise and blue, made them complement each other. 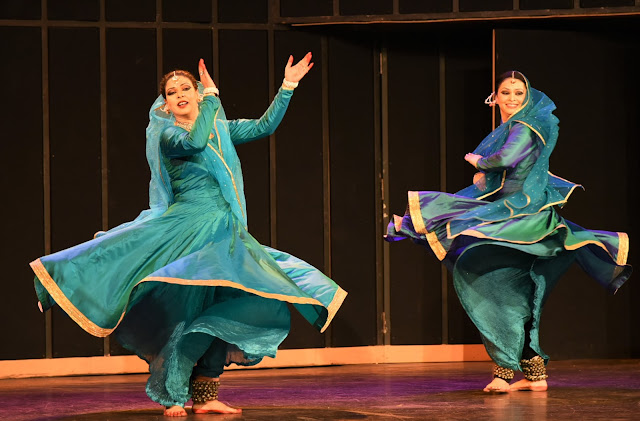 Vidha started with making Rangoli; as she sees her piya, she touches his feet and takes his charanraj on her head. Gauri did the ghoonghat gat and then the two depicted the lines ‘Khusrau baaji prem ki jo main kheli pi ke sang’, playing the dice game, Vidha letting the bird of her heart flutter and fly, and Gauri welcoming it back to her shoulder. ‘Jo jeeti to piya mile, jo hari to pi ke sang’ – the two dancers brought out the best in each other, partnering and complementing each other while transcending from the earthly to the sublime. 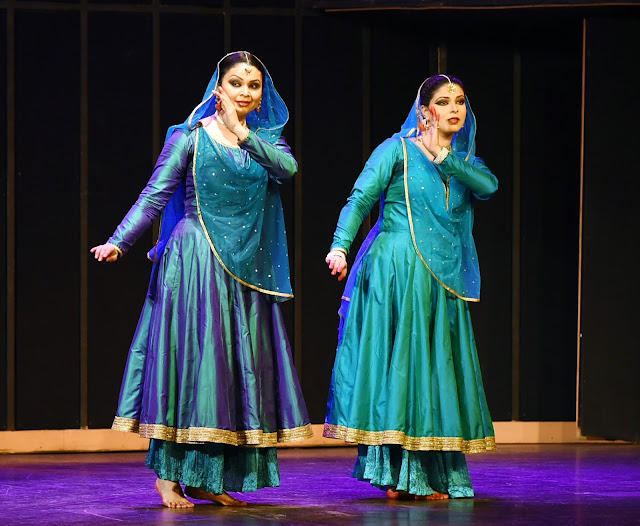 For this evening’s performance, the vocals were by Santosh, sitar by Salim ji, tabla by Yogesh Gangani and pakhwaj by Mahavir Gangani. The invocation and ‘E ri sakhi more piya ghar aaye’ were choreographed by Guru Gitanjali Lal. 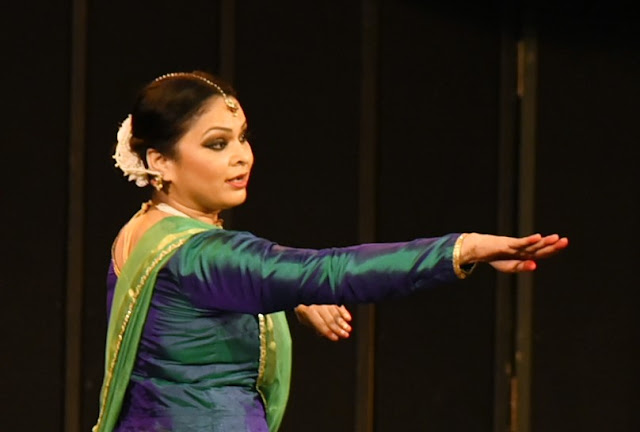 Later, Gauri spoke to me about the repertoire they performed, and the experience of performing together. ‘We did “Poojan chali Mahadev”, which is an old bandish sung by Dagar Bandhu also. It is usually sung in dhrupad. Then Vidha did khula nritya in nau matra and I did it in eleven. Then was another old bandish, “Piya ghar aaye”. It is a long bandish and we did only two antaras.’
On what it was like to dance with another great Kathak dancer, she said, ‘During our student years, we have danced together a lot. We have performed a lot together about 10 years back, when we were students and not professional artists. From the Kendra, when we were asked to represent different gurus from different gharanas, we did duets. We have worked together for Geeta didi. But that was ten years back. When Inni asked us to dance together, I don’t know what he had in his mind, but since we were asked, my intention was that it should look like a collaboration, not a competition. Since we are both professionals – though I do not believe in gharanas – and she also has a lot of tayyari, and since my year went well with international performances, including the Darbar Festival, it was very important to me.’ 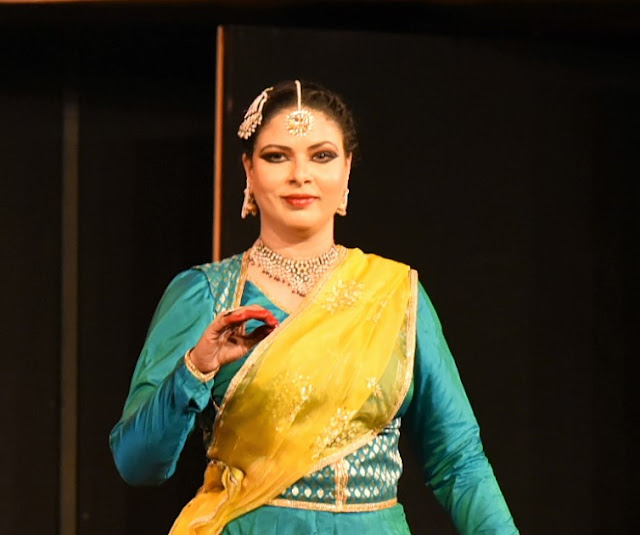 Elaborating on her experience, Vidha said, ‘In the nritta part, I did vasant taal, which is a time cycle of 9 beats, since we thought we could show something different and our command over it. I presented bandish of Jaipur gharana. I have danced with Gauri a lot since we are both the products of Kathak Kendra. So during our student days, we have travelled together often. In fact, we have performed together at Krishna Gana Sabha. We danced at the Ananya festival for Geeta ma’am. We have had good and positive bonding. Offstage understanding and bonding is necessary to dance together. Gauri being senior, she was very supportive. It is not the gharana that matters but ultimately, it is one show and we have to show oneness. That was the feeling we both had from day one, that it should come across as one show.’ 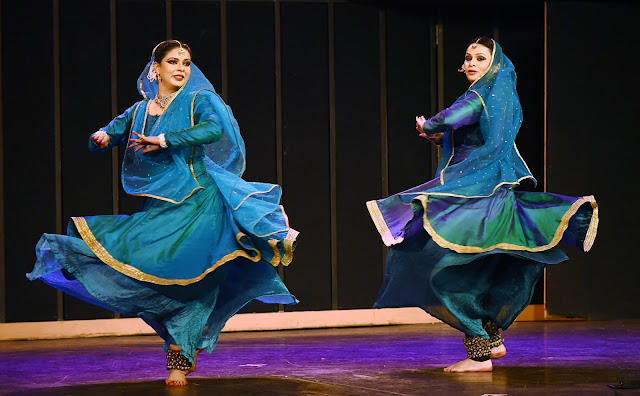 In the last piece, I felt that the two nayikas are calling out to the same piya rather than addressing their nayak, and about that, Gauri said, ‘When we talk about Khusrau, by “piya” we mean God, so it has to be the same piya, but in the worldly sense of the word  too, it could be the same piya. It is up to the choreographer also what bhava to portray.’