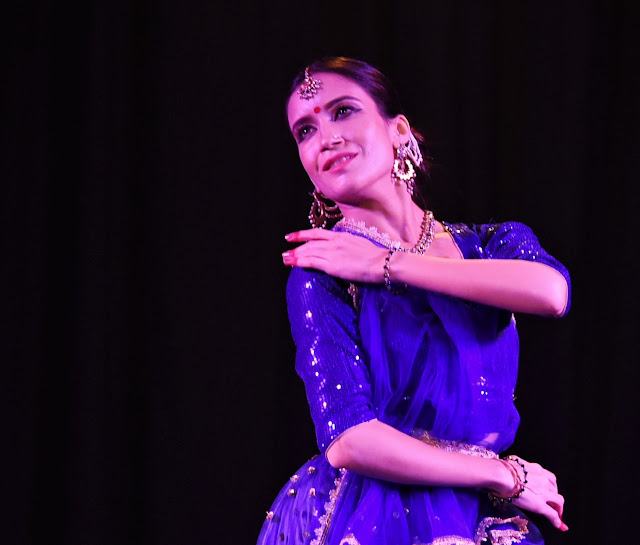 Kathak dancer Shivani Varma recently performed as part of the Uttaradhikar series organized by the Raza Foundation. This is a unique series in which the guru introduces one of his or her senior disciples. Shivani is the disciple of Guru Shovana Narayan. The performance was titled ‘Leela’ – as Shovanaji put it, life between birth and death is a leela. "Our existence is a brief crack of light between two eternities of darkness," she quoted before the performance. Love is the beginning, the pursuit, the end, whether we think of it in the worldly sense or the spiritual way, as all the bhakta poets have done.

The stage was lit by gently flickering candlelight, befitting the theme of shringara. Shivani’s costume was in blue, designed beautifully by Meera-Muzaffar Ali. Shivani as the nayika looked beautiful in it. 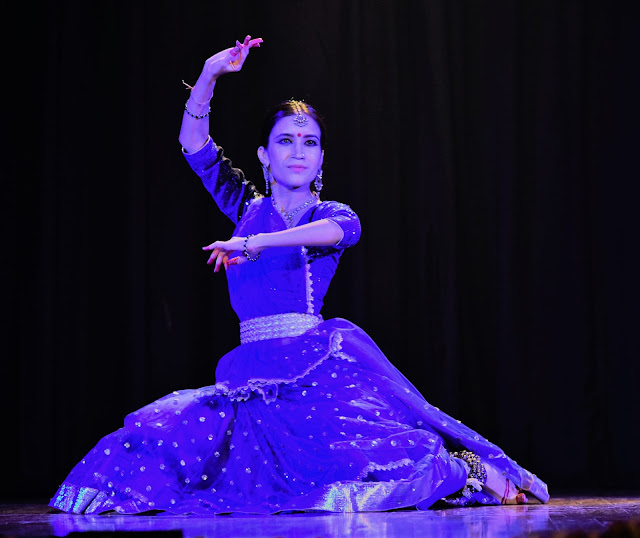 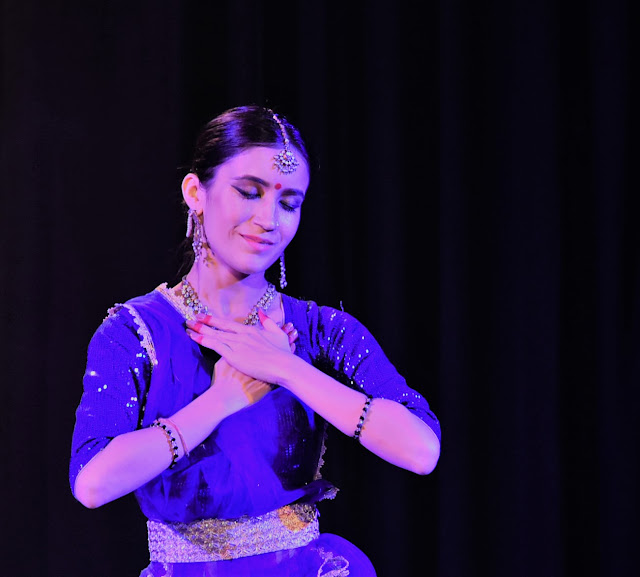 In the second piece, the moods of the nayika were shown. She has a dream and when her lover does not show up, the moods flow as follows – ‘hasti si, roothi si, kheejti si, risaani si, chhaki si, taki si, thaki si, thehraati si, beendhi si, bandhi si, vimohit si, vilokit si, bikani si’. Shivani, in her recitation, expressed the various moods of the nayika – ‘I am alone or am I alone?’ She feels his presence close to her. This was followed by a gat and footwork. 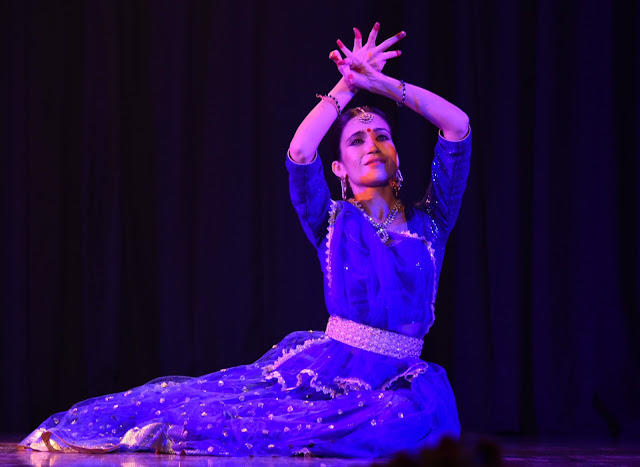 For the next section, she began with a gat,and a  thaat. The nayika is dressing up, kajal in her eyes, beni on her hair, teeka, earrings, necklace and kangan. She did a few pieces in vilambit laya, depicted Krishna’s murli and Radha’s ghunghat. Shivani elaborated on the shringar for the abhisaar in the dark, “Hey sakhi, neele kamalon ki maala aur mor pankh ke guchche hi upyukt shringaar hain.” This was a very romantic twist in the words of Jayadevji, which she depicted through a few gestures. She wrapped up the piece with nritta in tez aamad and chakkars. 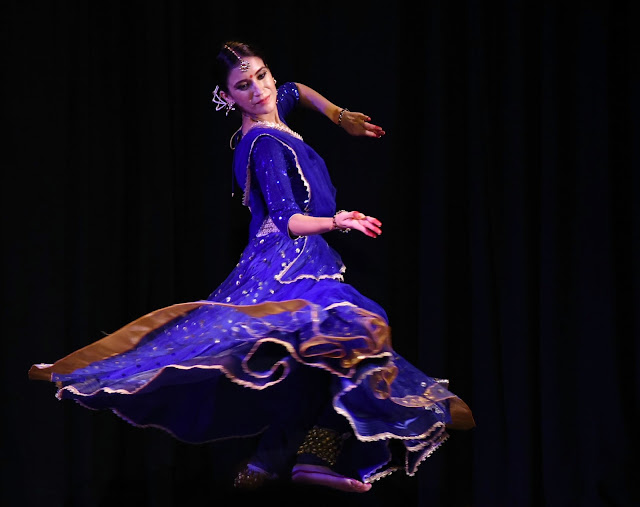 The next piece was about the abhisaarika nayika. 'Dhani  dhani chalo abhisaar' – the nayika leaves for abhisaar in the night while the clouds are still there. Manmatha, the God of Love, is still active. 'Trividh bayaar' – the wind, enriched by three types of virtues, is blowing – sheetal, mand, sugandhit. The nayika leaves holding a diya in her hand in the dark. Karma, dharma, kulguru – she has given up the restraints of all these for the sake of being with her lover. The clouds are rumbling, the lightning strikes – 'megh sang bijuri'. It is the merriment of love. This was a composition of the poet Vidyapati. The abhinaya was rendered with aesthetic sensuousness and sensitivity, maintaining the pace of the dance. This was followed by nritta, pairon ki uthaan, the jhoola act, sarp ki gat showing the presence of the snake during the night, chakkars and tukdas. 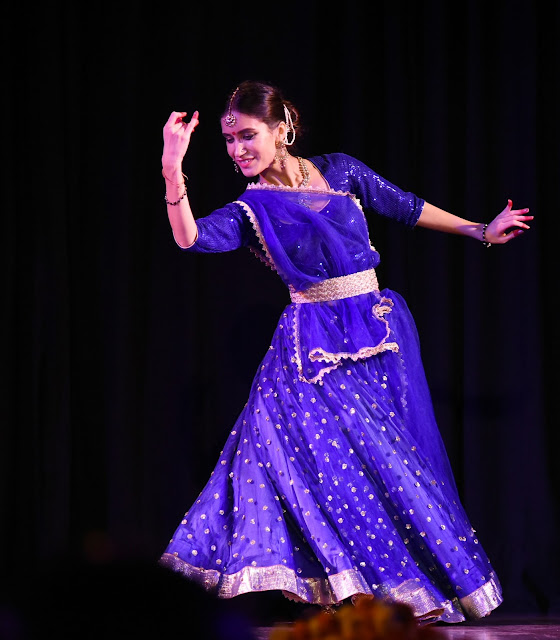 The final piece was a composition of Amir Khusrau – ‘Zehaal-e-miskeen makun taghaful, duraye naina banaye batiyan’. Here, she wanted to depict shringara rasa, but to deviate a little from the Radha-Krishna leela. “‘Who am I, who is he?’ - that is the existential question,” Shivani narrated. In the abhinaya, Shivani portrays a nayika rowing a boat and then mooring it to go to meet her lover. The love is like a burning lamp and the patanga, mar ke amar ho jaata hai (the moth becomes immortal in death). 'Na aap aaye na bheje patiyan' went the poem. It was a slow abhinaya piece to which Shivani did justice, showing the intensity of love. She ended the performance with a paran, requested by someone in the audience. 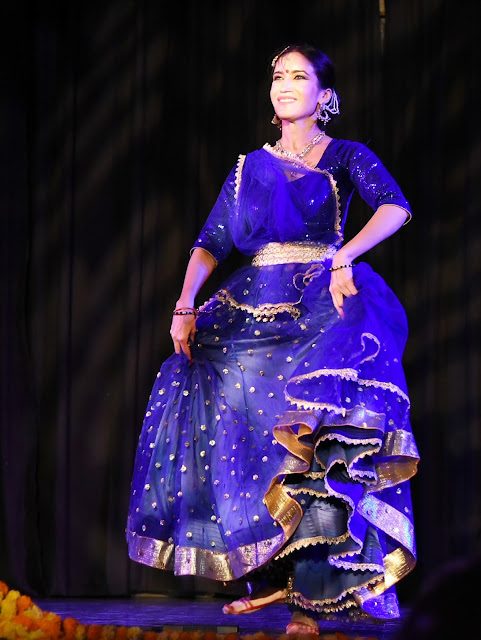 Shivani as a dancer has a good stage presence. Her technique is quite sound. Her presentation of the thematic nritya pieces is always sound. She has good energy as well. The theme ‘Leela’, based on shringara, was well-presented, but it thought that putting together a theme, reciting, doing abhinaya and infusing it with nritta pieces and interludes had all taken a toll on her stamina. As Shivani said, it was a great responsibility to be on such a big platform, and I thought I saw her catching her breath at times. But the performance did work the magic of Kamadev to spread the verses of love. She said she did not want to show abhisar as it is commonly done, and so she put it in the tayyari ang in the teen taal more a play on the traditional aspect. Kam is not worshipped commonly, she said, and the snake has been shown to be near the nayika in rasamanjari. “Love in life is important to all of us and we all strive for the same - to be loved and to love,” she concluded.

The presentation featured Pt. Jwala Prasad on vocals and music, Yogesh Gangani on the tabla, Salim on the sitar, Mahavir Gangani on pakhawaj, and Ahsan Ali on sarangi. Technical direction was by Manish Halder.