Parampara Series 2018 – National Festival of Music and Dance was held at the Kamani Auditorium on the 10th of August, 2018, by the Radha-Raja Reddy School of Dance, Natya Taringini. The entire Kamani Auditorium foyer and stage were bedecked with flowers, rangoli and brass urns.
On Day 1, Drs. Raja and Radha Reddy showcased their group choreography, ‘Suryam Pranamamyaham’. This performance and choreography were examples of the group’s hard work in rehearsals, technique and coordination, and it was also apparent, while talking to Yamini Reddy, how much research and thought had gone into the presentation. 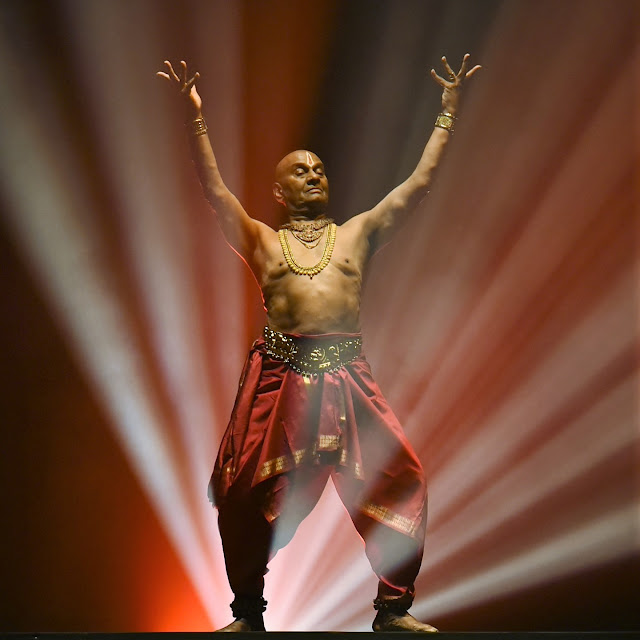 In the ancient Hindu scriptures, the belief is that when there was no creation, no existence, neither death nor immortality, neither day nor night, when there was utter darkness, an egg materialized, in the middle of which Pitamah Brahma was present atop a lotus stem. When the egg burst and Brahma emerged, his principal head released Rigveda, the eastern head gave the Yajurveda, the western head gave the Samveda and the northern head gave the Atharvaveda. Rigveda gave the powerful sound of ‘Om’. Yajurveda gave out the second circle of reverberations of ‘Om’. The third round of ‘Om’ was from Samaveda and the final segment was from Atharvaveda. The following sounds were ‘Bhu’, ‘Bhuvaha’, and ‘Swaha’. The sum of these three echoes formed the Surya. 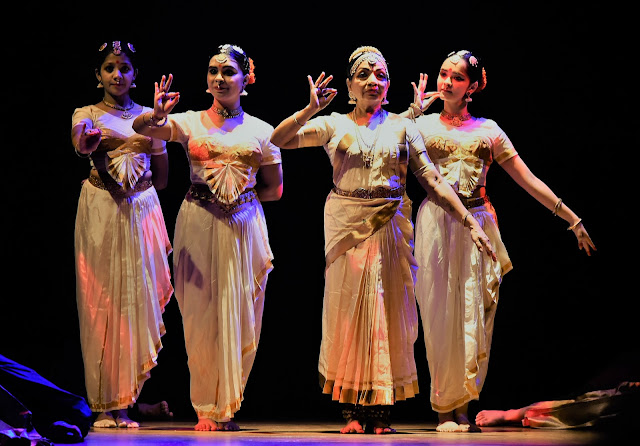 The depiction by the dancers of this very profound piece was as follows – dancers in black costumes encircling and enclosing Guru Radha Reddy as Brahma, representing the primeval egg. The dancers opened up with a jerk and Radhaji emerged in white as Lord Brahma. Three dancers joined her as the emerging Vedas, each of them performing a different wave-like movement with their hands, symbolising the reverberations of each of the Vedas. They would show the Om Bhu Bhuvaha Swaha. 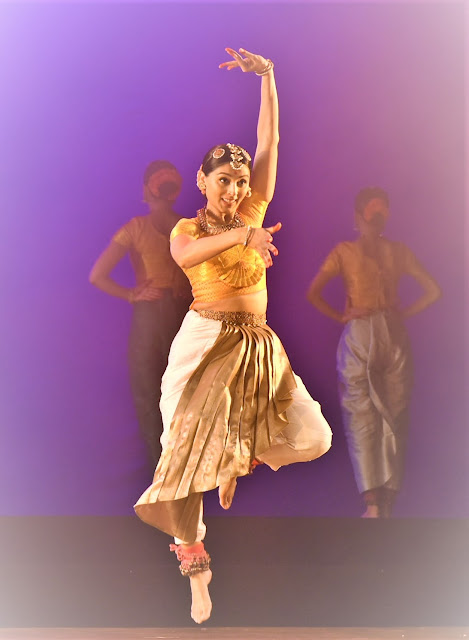 The god Surya is the creator of the universe. The sun is the centre that holds the other planets in their orbits through gravitational pull as they revolve around him. He is portrayed as riding a chariot pulled by seven horses. Surya is stationary, the planets are revolving around it. Guru Raja Reddy depicted the sun stationed in the centre. One dancer at a time essaying one planet would do their dance jatis and after rotating around Rajaji, would station themselves, or, as described in the literature, ‘tishtataha’ at a certain position. 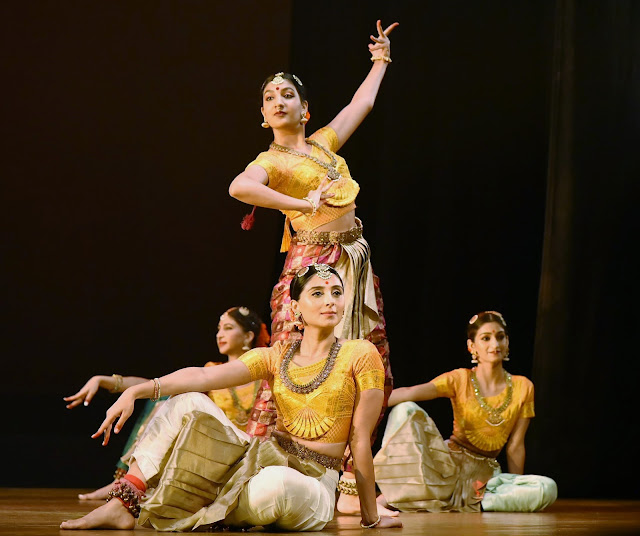 Radiance and radiation are essential to the evolution of srishti or creation. Surya is the source of life. Lord Brahma said that surya is the atmaswarupa, vishwarupa and vishwamurti. Surya is the embodiment of light and heat, the nucleus of the Vedas. He is savitur, stimulating and animating power. 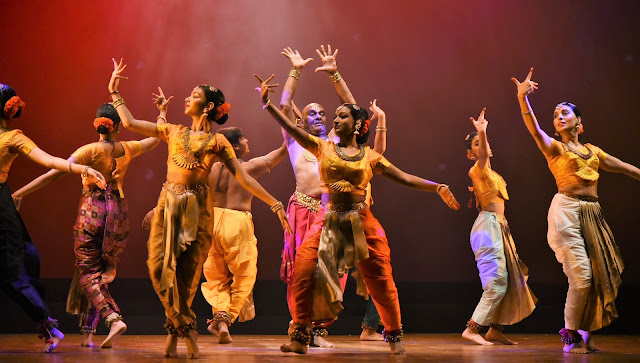 In the depiction for this section, the junior dancers of the academy were featured. Six dancers depicted green toads, hands wound around their legs, jumping like toads. ‘Horses’ in gold costumes were shown on the move, besides two elephants in green and three birds in brown costumes. 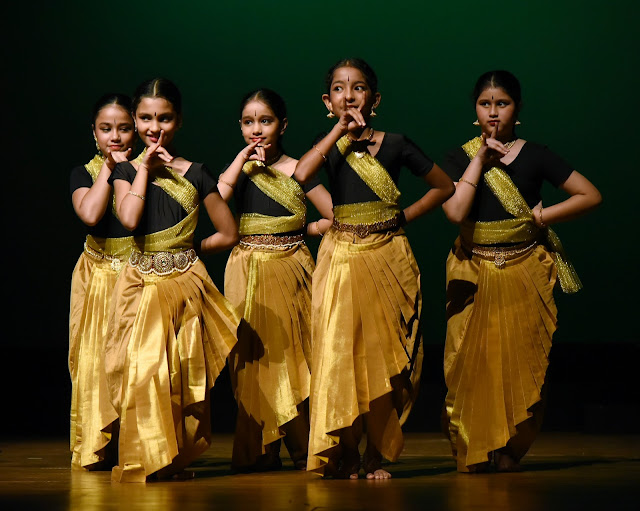 Together, they all brought alive the creation of God and surya, depicting it all through stances and postures. Radha and Raja Reddy were the male and female in God’s creation, romancing each other by presenting flowers. The surya thus is the Parah Brahma Swarupa, possessing all powers of creation, preservation and annihilation. 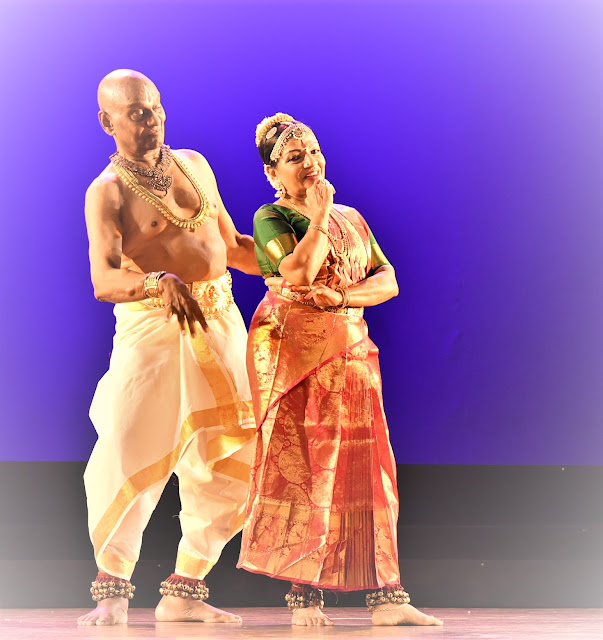 Finally, a group of dancers in orange and gold costumes danced jatis in nritta and then performed the surya namaskar. The dancers were like yogis performing the tough movements and asanas associated with the stotram. Yamini, with a couple of dancers, did an awe-inspiring regimen of asanas. The final stance, with the feet touching the head, was breathtaking. The surya namaskar stotram – the sun is the vision of the divine who removes darkness and fills our body and soul with his radiance – was conveyed in this performance through dance. 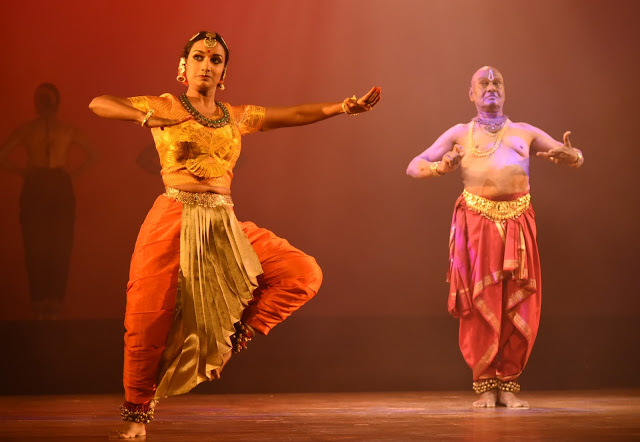 Later, talking about the production, Yamini said, “The mudras and positions for the navagraha or the nine planets were as per the grahas, like you find in temples. So after establishing the sun as the centre of the universe and the grahas around it, we had the voiceover saying that he also facilitated the emergence of the panchabhutas or the five elements which support life. After the panchabhutas came along with the sun, the process of creation began. Then came plants, birds, animals, humans, and once we established that the humans had come to life, then we showed the prayer to surya from the humans – how we pray to nature and God Surya to fill us with health and dispel all darkness. That’s where the Surya Namaskar comes. And then the concluding scene where we are praying to surya.” 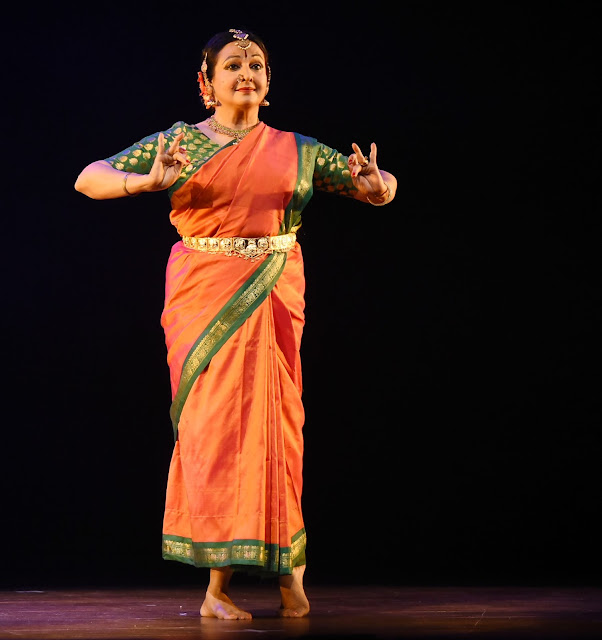 About working with so many dancers, she said, “It was wonderful – they’re all students and we’ve known each other for such a long time, I think we’ve built a very good coordination in stage. And, of course, Kaushalya mummy coordinated all the rehearsals – she’s a hard taskmaster so she really grilled them. Dad and I have been working on the concept for six months. I started the concept and he brought it to life with his choreography, and then that’s how our process started. I wanted to make it relevance to what we are today. Like the navagrahas – I wanted to make it relevant to what we read about the solar system in school and everything, to show that we’ve had this (in our texts) for a long time. I wanted to show the surya namaskar, for which we have movements in dance also.” 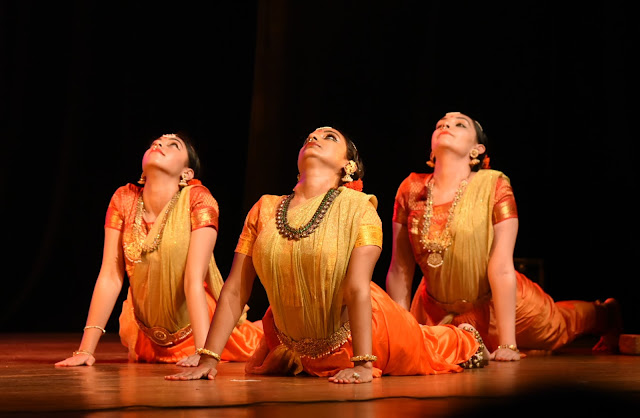