Madhura Bhrushundi presented ‘Nrityopasana’ at the Triveni Kala Sangam on the 21st of July in Delhi. Madhura has been learning Bharatanatyam under the tutelage of Padma Shri Guru Geeta Chandran for the last 10 years. She presented her arangetram in 2014, and as part of the Natya Vriksha Dance Company, has performed in group choreographies at many prestigious festivals in India and also abroad. She has also performed on various platforms as a solo performer and assisted her guru in SPICMACAY lecture demonstrations and workshops in schools and colleges. 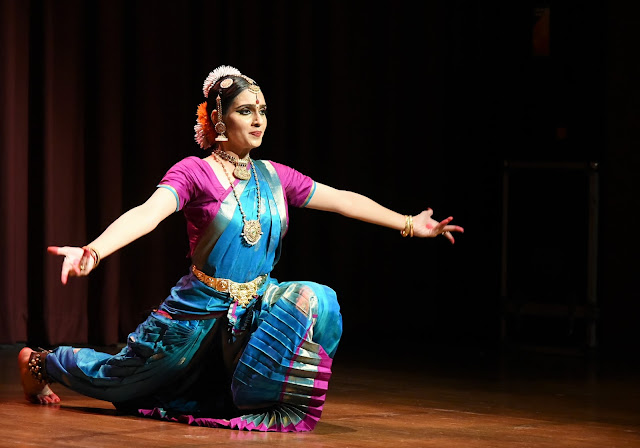 The entire stage was bedecked with mogra flowers. Madhura wore a blue magenta aharyam for the evening. Her tall, thin frame looked impressive. For the evening, she showcased the recent choreographic works of her guru, and a Tanjore quartet varnam in Kamboji ragam. 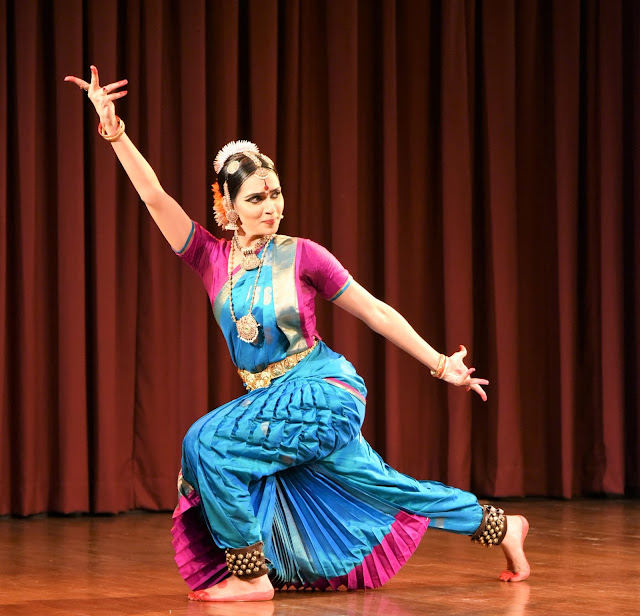 The first piece was a pushpanjali to Goddess Saraswati. Beginning with a stance to depict the goddess, she elaborated her attributes — tapasviney, kamalasaney, she holds the holy beads in her hand, kamalvilochaney, manahsviney, var prasadiney, with the hans as her steed. 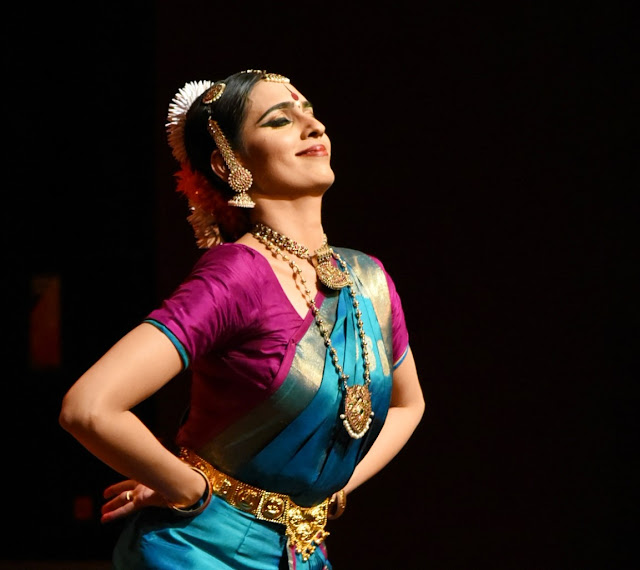 Next was a varnam, a composition of the Tanjore quartet, in raag Kamboji, aditalam. ‘Varnam’ means ‘colour’, and presents varied colours or expressions and aspects of a mood. The varnam ‘Sarojakshii’ talks about the yearnings of the heroine, who is in love with Maheshwara. She tells her sakhi, ‘The time is ripe for love, Cupid’s arrows are unbearable. The cuckoo’s chirping aggravates my pinning. Go and fetch Brihadeeshwara.’ Madhura started the piece with nritta – jatis, squats, leaps and footwork. The lotus-eyed sarojakshi is asked by the nayika to go and give the message to her lover. The expressions of yearning were brought out well by Madhura. 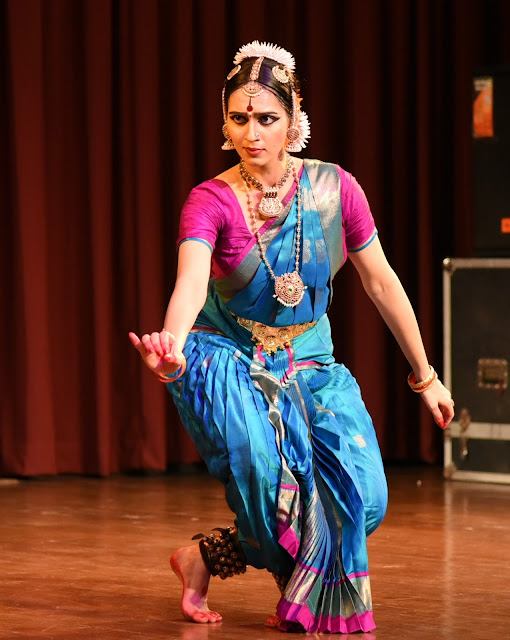 All of creation is conspiring to aggravate the suffering of the nayika. The bees on flowers, the birds, the bees, the butterflies, the doe-eyed deer, are all enhancing her pain. . Kamdev shoots his arrows and the cuckoo’s song aggravates the nayika’s pain. The gestures for Kamdev, with a bow and arrow, was interpreted in several different ways, with some very expansive movements and stances. Madhura’s abhinaya to show the pain caused by the cuckoo’s song, the burning of viraha, the arrows piercing the heart of the heroine, was executed with the skills given by her guru. 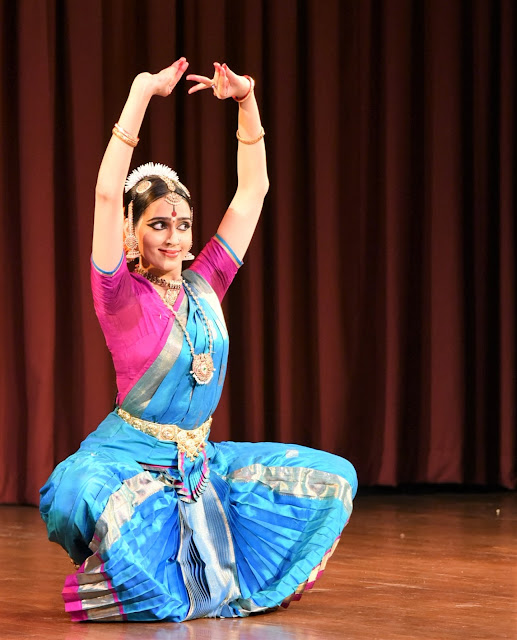 The next piece was a colloquial padam, in raag Saurashtram, aditalam. This is about jealousy between Devyani and Valli, the wives of Murugan. Devyani is the daughter of Indra and Valli is the daughter of a tribesman. Devyani thinks ill of Valli, also because she is the other lover of Lord Murugan. The depiction shows Devyani stringing flowers in her hair. She says to herself, today her (Valli’s) virtues are counted, and you speak highly of her. Today she rules. But there was a time when she came begging for jewellery with humility. So don’t sing her praises anymore. Madhura brought out that attitude of Devyani, since she is of a higher caste, and these expressions were very different from what was shown in the earlier piece. The jealousy and contempt of one woman for another was shown very well. 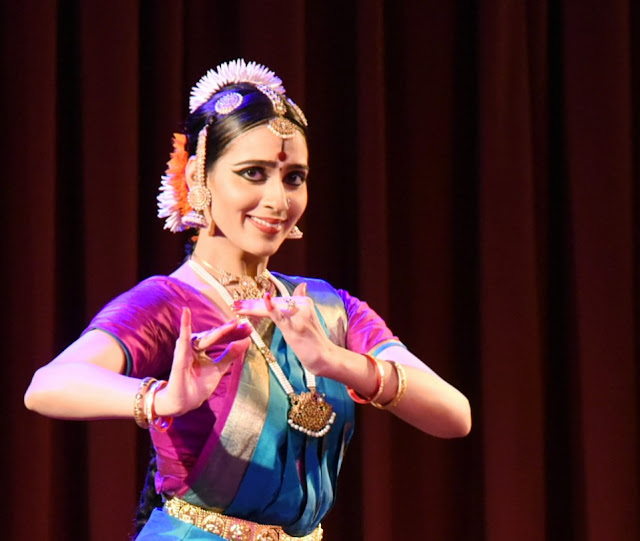 Next was a Meera bhajan, ‘Mane chakar rakho ji’, in raag Maand. The bhajan has been popularised by Bharat Ratna M.S. Subbalakshmi. The piece began with a violin solo by the young G. Raghavendra. Meera sits at the feet of Gopal, washing them, fanning him, stringing flowers for him, making chandan. While doing all this, she is begging to be his servant. The kirtan was done with khartal, mridangam and manjira. This bhajan is also Geetaji’s favourite and Madhura brought forth the unmad in Meera’s heart as she sings this bhajan to her lord. Dancing and singing is a state of ecstasy, and it was depicted very well. The bhajan and the nritya won the hearts of the audience. 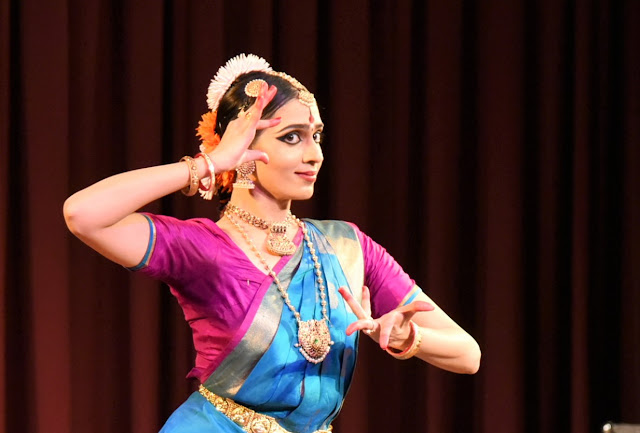 Finally, she performed a thillana in raag Raageshwari, aditalam. Music was given by Lalgudi Jayaraman. Her footwork, leg lifts, bends, expansive, open movements, balancing stances, precision — all were commendable, and a mirror of her guru’s excellence and perfection. Madhura truly soaks herself in the teachings of her guru. 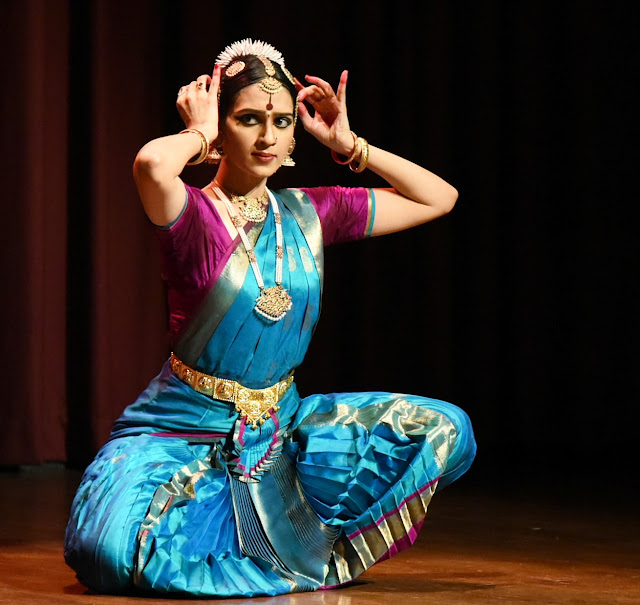 The nattuvangam and choreography were by Geeta Chandran, vocals by S. Venkateshwar, mridangam by Manohar Balatchandirane and violin by G. Raghavendra.
Pics: Anoop Arora