Impresario India and IHC celebrated the 20th year of the National Festival of Creative Arts on 21 and 22 March at the IHC in Delhi. On the second day, Rajashree Shirke , a leading exponent of Kathak, and her group presented ‘Mandodari ka satya’. A Sangeet Natak Akademi awardee for Kathak, Rajashree is also trained in both Bharatnatyam, and additionally, holds a Master’s degree in Hindi sahitya. 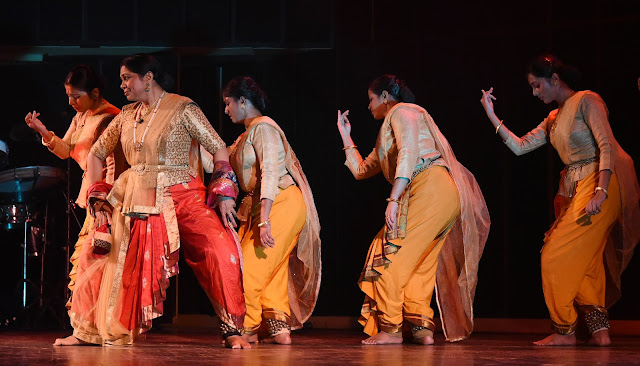 The tale for the production is a well-known one. Ravana abducted Sita from the woods and kept her captive in Lanka. Mandodari, Ravana’s wife, was a Rama bhakta, and for the love of her husband, tries to convince him that he should return Sita. However, he remains adamant.
This production is a dialogue between Ravana and Mandodari. It is in the Kathakar tradition, and the style reminded me strongly of Teejan Bai's style of narrating a story. The performance started with an ode to Lord Rama and the Ramayana – ‘Ramayana sata koti apara’ - with footwork. 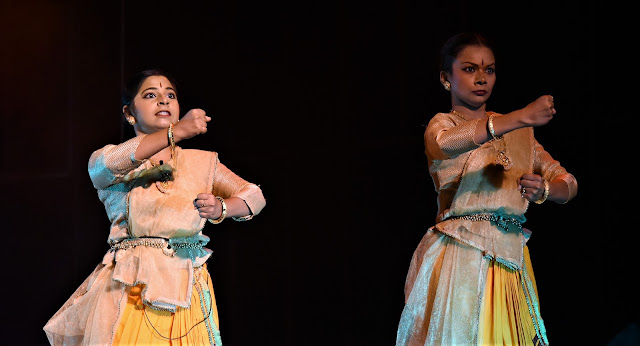 Rajashree starts the narration with Mandodari – ‘Mandodari janti thi satya aur asatya. Ravana kehta tum kayar ho. Kiski hogi jai aur kiski parajai? (Mandodari knew what was real and what was illusion. Ravana said you are a coward. Who will win, and who will suffer loss?)’ In the first scene, there is a huge ocean that has to be crossed by Rama's sainiks – ‘Ram kripa se patthar tair gaye, setu bandh gaya (by the grace of Rama, the stones float, the bridge is formed)’. Here again, the dancers start chanting loudly, as if it is a proclamation to Ravana – ‘Setu bandh gaya!’ in a chorus, followed by nritta. The narrative explains, ‘Sunte hi Ravana dasmukh se bol pada, nahin nahin! (as he heard that, Ravana’s ten heads exclaimed, no, no!)’ in an echo, ‘aur ghabrakar hanste hanste mahal mein chal pada’ (and, laughing with anxiety, walked into his palace). Mandodari comes to know of the bridge on the ocean being completed. Since she is a Rama bhakta, she is happy that Rama has landed on the territory of Lanka. But her advice to her husband, given in a humble tone, goes in vain. 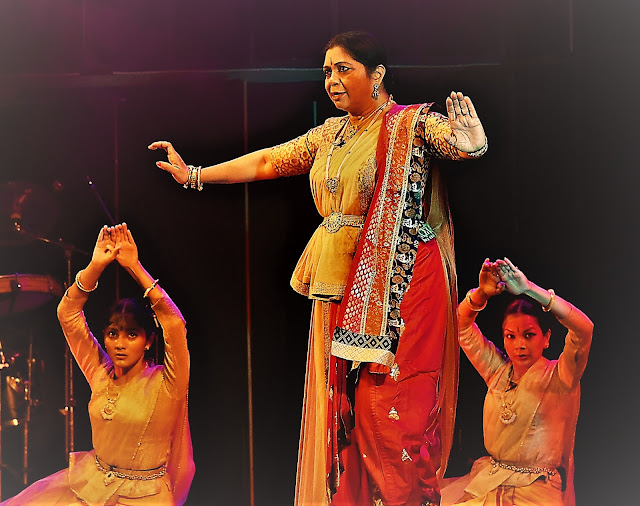 Again, Rajashree took on the tone and the act of Mandodari. Rama narrates how Sita was abducted from the Panchavati while he had left to look for the golden deer. ‘Ram manviya dasha mein vilaap karne lage (a grieving Rama begins to weep)’, and he asks every being in the forest about the whereabouts of Sita. 'He khaga-mriga, madhukar shreni, tum dekhi Sita mriganayani (birds, deer, bees, have you seen my doe-eyed Sita)?' The scene comes back to the present. The drums are beating to show the progress of the sena. 'Prabhu Shri Ram Chandraji ki agya hai ki setu bandh lo (by the order of Shri Rama, raise the bridge)', again, like a pronouncement. He progresses with his monkeys, Hanuman, Nal and Neel, to 'Uday bhaye Raghuveer', followed by tihais and nritta.
The entire sena comprising of huge monkeys and bears created the jayaghosha of ‘Jai Raghuveer pratap samuha'. Mandodari is still reasoning it out with her husband, who scoffs at her. For this particular scene, Rajashree’s postures of Ravana were influenced by her Bharatanatyam training. Mandodari then gives up because she realizes that his arrogance is irredeemable. 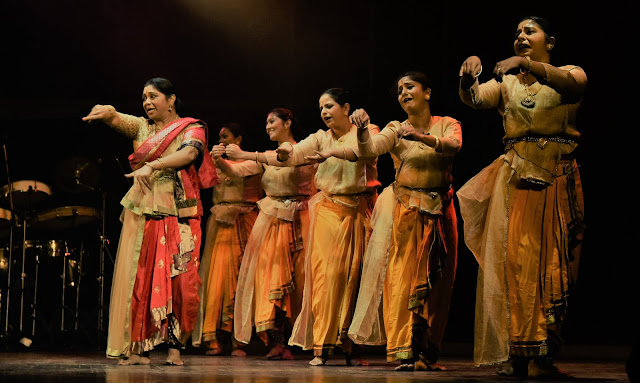 The next scene is in the Ashok Vatika, where Sita is sitting in extreme pain or viraha. Here, the four dancers enacted the distraught Sita covering her head, and Rajashree alone portrayed Ravana. Ravana requests Sita, 'He sumukhi, meri or dekho (my beautiful one, look at me).’ These lines of Sita are immortalized in the Ramcharitmanas - 'Kya kabhi khadyot ke prakash se kamal-neel khil sakti hai (can the light of a firefly cause the lotus to flower)?' An offended Ravana takes this as a challenge for war. The dundhui starts playing. 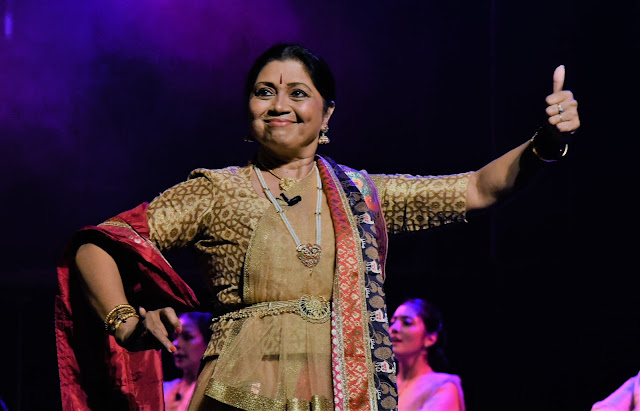 The dancers, as warriors, ‘fought’ with footwork, leaps and chakkars to the beats of drums. When Rama sees that he needs to step into the war and he picks up his bow and arrow. Even Lakshman, under his feet as the naag, starts to quiver. This was very well depicted by the four dancers. Ravana is shown rubbing his hands while Mandodari is still pleading. Here, a composition by Bindadin Maharaj was used. The fight was depicted through music and drums. 'Rama sadharan nahin hain, parai stree ka apaharan paap hai, vijay sada satya ki hi hoti hai'. Vibhishan gives off his secret about the amrit in the nabhikund and Ravana is killed. 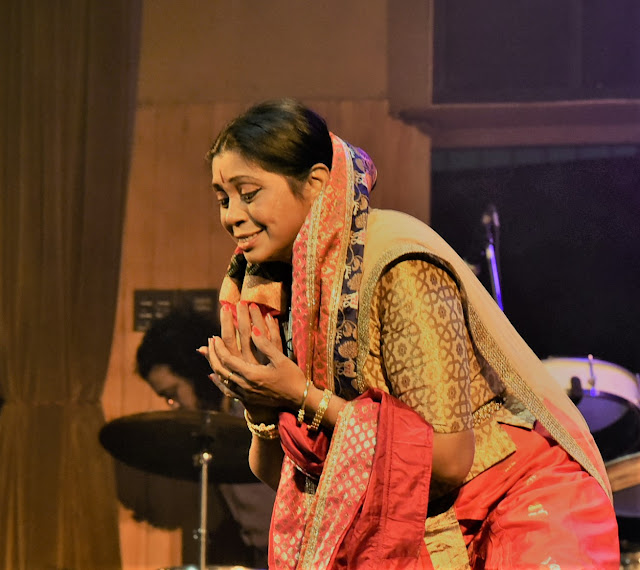 Here, a special mention for the musician, Rajashree's son, the costumes, the dancers, the choreography and the special effects. 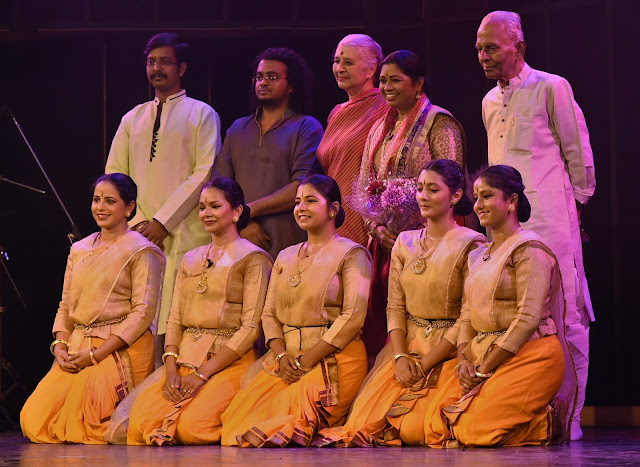 Later, Rajashree explained more about the production in a brief conversation.

Q: This a very novel type of choreography that you have used for storytelling. You have used live music and the dancer herself is relating the story, besides dancing. It is as if you have fused dance and theatre.
A: I would not call it fusion, I would call it ‘total theatre’. I myself am a student of the Natya Shastra. I have done my Master’s in Hindi literature, and Bharatnatyam and Kathak have been my passion for many years. Since childhood, I have heard “katha kahe so kathik kahave”. In Kathak today, tode, tukde, paran, tatkar – that expertise has to be there because it is the vocabulary of Kathak, which was developed afterwards in the Mughal darbar. But the origin of Kathak was in the temples, where tales of the gods and goddesses were related. Uska shodh lete lete main Ayodhya mein teen mahine rahi or Vrindavan me sab mandiron me travel kiya. In Maharashtra, where I’m from – in fact, in all of southwest Asia – there is a tradition of narrating a story. Even when I used to do Bharatnatyam, if I’m doing a varnam, a javali, I’m narrating the story. But it’s a classic, the framework within which we do it.
So then I thought (adding theatrical elements to it) ki is dupatte ko le kar, kabhi uska ghoonghat bana sakte hain, dono haath mein liye toh Ram ban gaya, kabhi narrator ban gaya (the dupatta can be used as a theatrical device, used as a ghoonghat, to show Rama when draped over both arms, to show the narrator etc.). Waise log mandir mein baithte the, aur isne kaha, usne kaha, aise unse samvad karte the (as it is, earlier, the spectators in the temple would be spoken to when the story was narrated to them). So I thought that must be there.
See, I don’t take the credit at all, but I felt that this is my interpretation of storytelling, with my technique. Of course, the stances and all I used from the Natya Shastra. But Ravana I want to show, I can’t show like this (in the straight stances of Kathak). Even Sita’s body, when she is longing for Ram – the stances I used were from the Natya Shastra.
Then I started doing this as a narrative art form. Kathak mein toh mic saamne laga ke logon se baat karte hi hain, so I thought ki main mic yahan laga ke katha kahoongi, aur woh katha kehte samay is dupatte ko le ke – abhi main toh akele dupatta use kar rahi thi, lekin body language se yeh kabhi bandar bane hain, kabhi Ram, kabhi Ravana, kabhi Sita, kabhi rakshas (as it is, Kathak has an element of addressing the audience, there’s a mic for the bols anyway, so I thought I’d use it to narrate stories, and add props and body language for various characters, in the style of traditional storytelling). This way, we portray different characters using our bodies, and change the character as we turn, which is what it says in the Natya Shastra. Aise karke hum katha kahenge, isliye isse Kathakar Paddhati kehte hain (we tell stories in this manner, that is why we call it the storytelling tradition).
As for the paran, tode, tukde etc., I have incorporated them into the music – itna sagar hai, the vocabulary of Kathak is limitless.

Q: What’s also interesting is that the dancers behind you are sometimes reflecting another character, sometimes the same as yours.
A: Yes, that’s because I employed the ‘total theatre’ concept – dance, music, etc. as an integral part of drama, which it initially was, before they all became separate forms.


The concept, choreography, script and direction of the production were by Rajashree Shirke; music, rhythm accompaniment and singing by Anirudha Shirke; vocal and harmonium by Mayur Mahajan; and lights by Sandeep Dutta. The dancers were Sheetal Kulkarni, Vedanti Bhagwat, Urvi Suki, Sheetal Kapole, Saniya Haque and Rajashree Shirke.