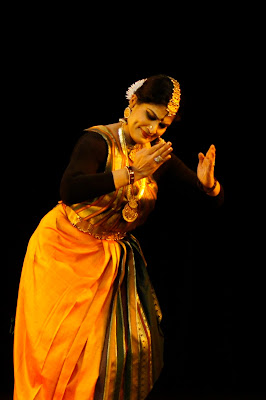 Geeta Chandran is a renowned Bharatanatyam dancer who needs no introduction. She started learning Bharatanatyam at the tender age of 5 years under the tutelage of Smt. Swarna Saraswathy. She has learnt from a galaxy of eminent gurus. She is also the artistic director of the Natya Vriksha Company, known for the high aesthetic quality of its group presentations. She has travelled all over the world with her performances and has danced at many prestigious festivals. She was awarded the Padma Shri by the President of India in 2007. 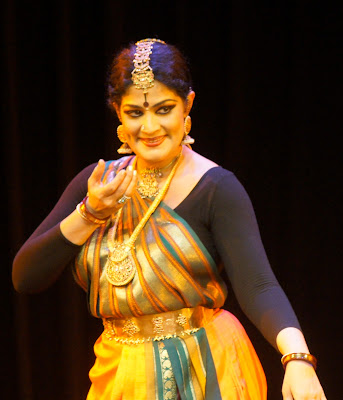 Geeta spoke thoughtfully about the production, “I have been to Orissa many times and I know what the ground reality there is. It is one of the poorest states. I was very touched by the work the NGO is doing there, so when they approached me to give my time, I agreed readily. When I thought about the concept ‘yuvati’, I did not think about the typically feminist angle, but instead, I applied it to a larger context of nation, earth and spaces. The mallari was conceived vis-a-vis space, since women are fighting for their place all over the world. So I used the metaphor in the composition. Aya giri nandini has been with me since childhood, since the chanting stays with you. Women look for energy to the mother, who embodies it.” 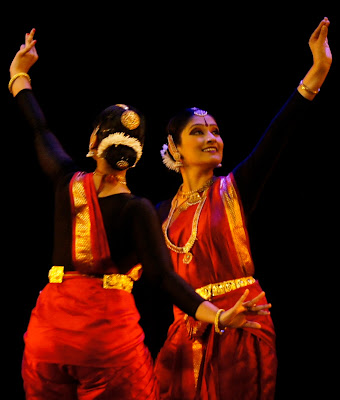 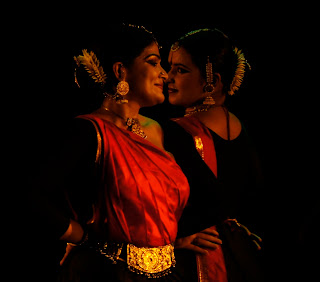 Speaking about Seasons, which was choreographed to 19th century Russian composer Pyotr Ilyich Tchaikovsky’s music, she said, “Sound has always inspired me. Some people choreograph a piece and then conceive the music. I listen to the music first, and then think of movement. Maybe that’s how I have been trained. I listen to the music many times. It has a classical background and they share the same grammar, so the effort has been to connect the two grammars. The soundscape is so grand and beautiful, it lifts you to another experience. The first impulse is to compete with the music. If the music is grand, then the movement has also to be larger. So the challenge was to bring subtlety while retaining the mood. It took me long since I had to divide the track into sections, since it was not conceived as seasons. After the breaking down, it was interpreting it into Bharatanatyam. Yes, it was difficult, but very enjoyable. There was not a single movement which was not Bharatanatyam. Every movement was classical. Whether it was the sun chariot with the ‘thaiya the hi’ beats or the metaphors of the lotus or a flower. It was all very gratifying. People call it fusion, but it was not fusion at all. It was just changing the soundscape, an experiment to push the boundaries of Bharatanatyam. Because the body, the spine, the posture, the footwork, the ‘hastas’, were all one hundred percent Bharatanatyam. I did not have to move away from my genre. I was so happy since I did not have to give up the vocabulary of Bharatanatyam. The soundscape was so grammatically there.” 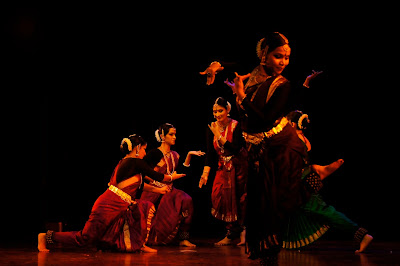 After the lighting of the ceremonial lamp by Dr. Karan Singh and Dr. Sayeda Hamid, the evening’s performance began with a contemporary dance routine by the boys of Salya Sahi, a slum in Orissa, which is one of the biggest in Asia. They were trained by the volunteers of Parichay. They brought a lot of energy to their dance, with lots of leaps, flips, somersaults and handstands. The dance exuded energy and showed how this could be positively channelized.

‘Yuvati’ began with a ‘mallari’. This was to highlight the need for society to be more sensitive to the young girls of India, who are demographically more than a quarter of India’s total population. The dance choreography highlighted the need to make public spaces safer for young girls. It was a ‘nritta’ piece, performed specifically to sanctify the performance space, with some excellent group discipline and rhythm. 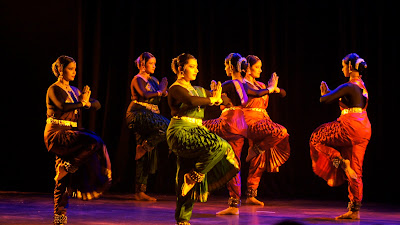 In the second piece, Geeta interpreted our nation, our mother earth as the radiant yuvati. This yuvati has a samadrishti towards all. The composition chosen was ‘Vande Mataram’ by Bankim Chandra Chatterji and sung by R Venkateshwara, to describe this ‘yuvati’. Sujalaam, sufalaam, malayaja shitalaam, shasya shyamalaam, suhasini, sumadhur bhashini, shubhra jyotsna, sukhadaam vardaam. It was a beautiful solo nritya piece where every word was interpreted to bring out the beauty of the composition. The grace and imagery left the audience mesmerized. The choreography and the rendition of the song created the image of a dazzling damsel. 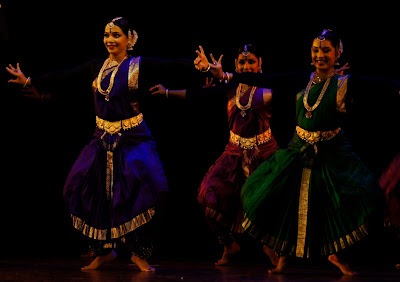 The next piece was a pure dance piece, a tillana. The gopis long for Krishna and he meets their aspirations. Radha is portrayed as a ‘yuvati’ who has the strength and conviction to make the choice of loving and longing for Krishna. The caliber of their guru shows in the execution of the piece by Natya Vriksha students. The energy, the rhythm, the synchronization – all of it was impeccable; there was some excellent choreography with graceful movements.

The next piece, Devi Mahatmayam, was a solo by Geeta herself. The Devi has many rupa. She is the mother, the sister, the consort. She is endowed with many weapons. The Devi Mahatmayam establishes her supremacy as she is navyauvana, or forever young. She is constantly fighting the battles within - that of intellect and conscience - and those with the outside world. Geeta started the abhinaya piece with a shlokam, ‘ya devi sarva bhooteshu, shakti roopen sansthita’. For the performance, Geeta wore a massive neckpiece that she had bought in Gujarat. It acted as an appropriate ornament for the performance, adding to all its grandeur. ‘Aya giri nandini, nanditamedini, vishwavinodini, nandanute’ is a prayer, and Geeta portrayed the devi as the vishwavinodini, vishwavilasini, shailasute, bhagwati, mahishasuramardini, tribhuvanaposhini, sindhusute, madhukaitabh bhanjani. Through the abhinaya, Geeta depicted, on one side, the beauty of the devi, and on the other, the ferocity of the devi and her steed, the lion. The final stance in a sitting position, with the devi depicted with her hair tied up in a knot and the naag swaying on her head, took the audience’s breath away. The composition was sung by Sudha Raghuraman. 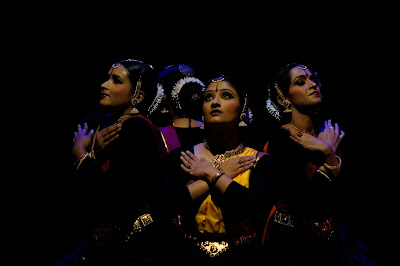 Finally, Geeta presented Mother Earth as the ultimate yuvati. She is the eternal yuvati, capable of rejuvenation and recreation. According to Kalidasa in the Ritusamhara, the earth goes through a cycle of seasons in nature. All creation - the birds, the flowers, the trees - go through this change. The surprise element in this performance was that the music was that of 19th century Russian composer Tchaikovsky. Since the dance was purely Bharatanatyam, and the music purely western classical, I would call it a Bharatanatyam ballet. The piece opened with human beings going about their daily chores, with the sun as the prime source of energy. But in summer, when the heat is intense and scorching, men are miserably sweating, and the earth is parched. The dancers formed the sun chariot as the music rose to a crescendo. The lights gave a red hue to the stage. Then follows the rainy season, which is a happy reprieve. The droplets of water fall gradually, and the peacock begins to dance. The peacock dance was done by Geeta herself very gracefully. And then the rain comes in torrents. The dancers depicted the pleasure of playing with the water. The earth takes on a blue hue. The next season is the autumn. The colour of the earth is brown with dried leaves, with the falling leaves being shown by the dancers through a swaying movement of their hands. The winter follows, with people covering up and huddling together to protect themselves from the cold. The hues change to white, and then life springs anew in the spring, the season of love, tenderness and togetherness. The ponds are filled with lotuses in full bloom, the bees are hovering over the flowers, the trees are laden with leaves and fruits, the blossoms are everywhere. The dancers created a beautiful imagery of a scene from the forest, where the deer are frolicking, the butterflies and bees are buzzing, and the maidens are collecting flowers to be strung together. The music, the pace of the dance and the technique, all created a mesmerizing image. Not once did you feel that the music and the dance were not meant for each other. The delight was unspeakable. In the entire performance, the beat from the footwork was pronounced as the dancers were not wearing their ghungroos.

The yuvatis of Natya Vriksha with Geeta were Divya, Anjana, Sneha, Amruta, Rashi, Radhika and Megha. The costumes were designed by Sandhya Raman. The costume for seasons, a black sari with a copper fringe and coloured dupattas, was very aesthetically done.