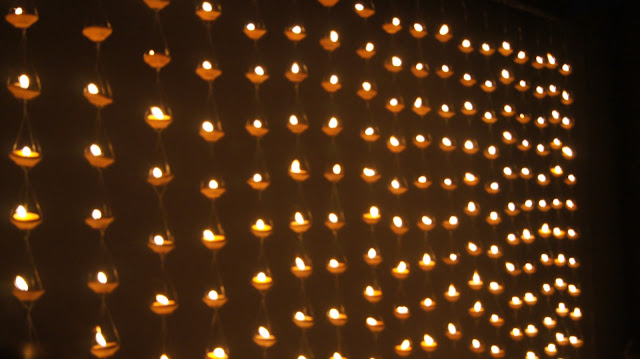 ‘Ananya’, the unparalleled, is the title of the classical dance festival held at ‘Purana Quila’, the old fort, from October 6th to 10th. It is called the ‘dialogue of Indian classical dance with a heritage monument’. ‘Ananya’ waits for the autumn or autumn awaits ‘Ananya’. The weather is very pleasant. One walks on a tree lined road to be greeted by a hundred shimmering ‘diyas’ at the entrance to the lawns. And in the backdrop of the stage is the ‘Purana Quila’, its arches lighted up. 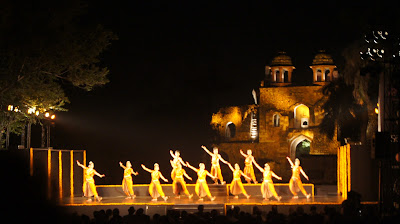 On Wednesday, 6th of October, Saroja Vaidyanathan’s group presented bharatnatyam. Saroja initially trained in bharatnatyam under Shrimati Lalitha in Chennai. She was later a student of the well-known guru Kattumannar – Muthukumaran Pillai of Thanjavur. She studied Carnatic music under Professor P Samhamoorthy at Madras University and obtained a D Lit in dance from the India Kala Sangeet Vishwavidyalaya, Khairgarh. She is the founder director of Ganesa Natyalaya in Delhi. She is the recipient of several honours, including the Sahitya Kala Parishad Samman and the Padma Shri in 2002.

The theme for the evening’s performance was ‘Shiva- Shakti’. Sarojaji said, “Ananya brings out the best in the dancers. The organizers do an excellent job. And the weather is so pleasant. Since Delhi is a cosmopolitan city and we have to appeal to all kind of audiences, we cannot be very rigid with the choreography. If we stick to the pure form of dance it will not interest everybody. So we do make improvisations.”

Shiva-Shakti is described as the union of the two omnipotent forces constituting the continuous cycle of creation and destruction. They are the infinite energy which is the beginning and end of existence. The first piece had three parts - Angikam Bhuvanam, Shivashtakam and Panchanadai Alaippu. Angikam Bhuvanam is a piece from Abhinaya Darpana. 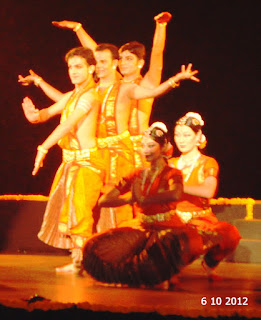 This Sanskrit ‘shlokam’ portrays Lord Shiva’s body as the entire universe. We bow to that omniscient lord. ‘Twam Vande Satvikam Shivam’. This was followed by composition by Adi Shankara, another Sanskrit ‘shlokam’, describing the Almighty. The various attributes of Lord Shiva – ‘Jagannath’, ‘Bhootnath’, ‘Gale Rund Maal’, and Ganeshaya Adibalakam’, were described through the language of dance. This was followed by a pure ‘nritta’ piece, a composition of Guru Saroja. The rhythmic beats and the tempo of the dance were excellent. 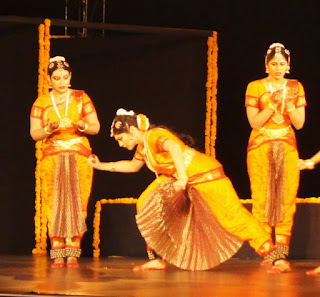 The next piece was titled – ‘Mahishasurmardini’. It was again a composition by Adi Shankara. As the title suggests, ‘Devi’ takes on the form of ‘Ashtabhuji Durga’ to destroy the demon, ‘Mahishasur’. The dancers enacted the fight. Finally the dancers lined up to perform the ‘Ashtabhuji’ form of ‘Durga’ – each one depicting each arm of the ‘Devi’, adorned with the weapon. The next part was ‘Om Shakti’ a composition by Subramania Bharti. It was about ‘Devi’ giving happiness to humanity and blessing her devotees. 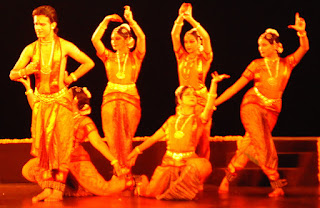 Subsequently, the third piece, titled ‘Panchbhoot’ was a composition by Guru Saroja herself. Lord Shiva is the manifestation of the five elements of the universe. Earth- the ‘bhasmi on his body, Fire- in his left hand, Air- in his ‘damru’, Space- represented by the crescent moon on his head and Water- the river Ganges flowing from his matted locks. Each element was taken up by the dancers and depicted in various formations. This composition was executed with a lot of technique and grace. It was the most beautiful piece of the performance. ‘Swaranjali’ was again a pure ‘nritta’ piece which shows the joy of dance. The finale was ‘Mangalam, Vande Mataram’.

The dancers wore vibrant red colour costumes that looked appropriate for the concept. The music, the rhythm, the technique and the timing was flawless. The group had immaculate coordination and the formation depicting ‘Shiva’s and Durga’s forms were awe-inspiring. The leg lifts and balancing stances were flawlessly executed. Indeed, a performance that gave goose bumps and left one asking for more. 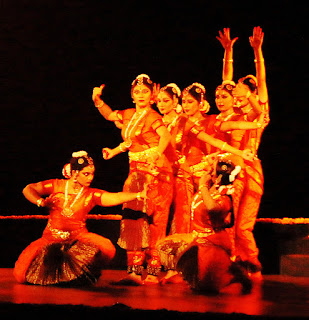