Anita R. Ratnam had first produced ‘Devi Diaries’ on Narthaki Official in 2020, and produced the second season in 2021. The series featured classical dancers performing odes to the devi for the camera in short videos, and so it also became a demonstration of how classical performing arts had adapted to the camera during the pandemic. I have written about some of the performances from 2021 in a previous post (link), and am writing about a few more here. 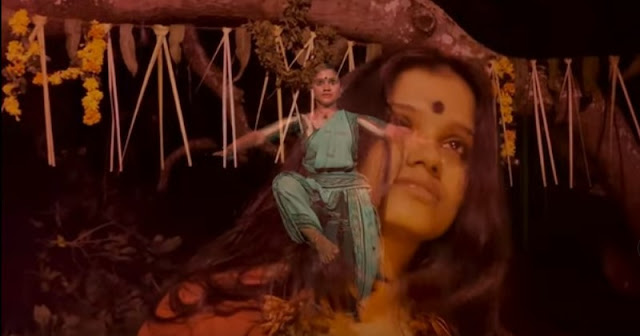 Karthika Madhavi, Kuchipudi: The Kodungallur Bhagavathi was shown by Karthika in Kuchipudi. The choreography is about invoking the goddess. The language is Malayalam and Tamil from Palakkad region. The video begins with the marble eyes staring at you and the drums playing. Karthika chose to show two parallel aspects of the devi puja. In one, she is wearing a green cotton sari and dancing about the attributes of the devi to a very catchy song. The devi is described as adishakti, bhagavathi, mahishasur mardani durga, narsingh roopini, chandi, chamundeshwari. Those were the names and attributes recited with the nritta bols. The dancing was agile, with stretches and leaps and rotation on knees, showing through gestures the attributes of the devi.
There was a parallel video showing Karthika dressed in a red blouse and skirt, sitting near an agni kund, and the entire area demarcated by flowers and sticks. In devi puja, there is a practice wherein during the puja, the devotee calls upon the devi to come and reside in her body. Karthika in her depiction calls upon the devi, and once she is possessed, jumps in ecstasy and continues her head movements and throws about her hair in occult puja. It was a mythical take on devi puja. Direction and camera: Sreelakshmy Govardhanan, music composer, vocal and violin: Shyam Kalyan, rhythm: Kalamandalam Sreerang, light designer: Jose Koshi, editing: Joy M. Raju, second camera: Mintu John, location: Avanthika Space for dance, Irinjalakuda and Thrissur. Aniruddha Knight, Bharatanatyam: Aniruddha Knight presented Maatangi/Kalpagamma. According to Aniruddha, devi worship is an integral part of his family’s tradition. The family traditionally plucked flowers and made garlands for the puja. The compositions chosen were ‘Kalpagamma’ (shabdam about godess Kalpagamma in Mylapore) and ‘Shyamala Dandakam’ about the goddess Maatangi. Both adhere to the family style of manodharma. The language was Sanskrit.
The video started with visuals of Durga Puja in Bengal. The first piece was Shyamala Dandakam. Aniruddha, wearing a blue top and white dhoti, his feet dipped in the ocean waves, his anklet bells tinkling, made for an aesthetic sight. The lyrics and the abhinaya praise the goddess as the one who plays on the veena, has a parrot on her shoulder, who sings and has a gait that wins the hearts of her bhaktas. Your music opens the mind to knowledge, it says. She is like a blue gem and komalangi or one with a supple body, adorned with flowers that weigh on her chest. She is the daughter of sage Matanga. The aesthetics of the video were very high. The setting, with the ocean in the background and its roar mingling with the sounds of the anklets, created a surreal effect. Aniruddha’s costume blended with the colours of the sea, and his gestures and gait created a magical effect. The vocals complemented the effect of the piece.
‘Kalpagamma shabdam’ started with nritta. The video was shot outdoors and Aniruddha wore a red upper and white dhoti. Kalpagamma is like a mayurika who roams to look for her husband, Neelkanth. She plays like a peacock on the seashore. Aniruddha took peacock stances and jatis like a dancing peacock frolicking in mangroves near the ocean. She offers flowers to Shiva with the five syllables Na – Ma – Shi – Va – Ye. She spreads her wings to cover him and embrace him. Neelkanth is your husband and you his pativrata, who roams around searching for him, said the poetry. Anirudhha gave all the coy looks of Amba in love, who wants her husband by her side. She is the one who stopped him from drinking all the poison and saved him. She threw her earring to make the new moon into a full moon on a dark night. The poet Raghav wants her to reside in his heart as he offers the lotus of sahasrarachakra at her feet. Aniruddha took the last stance of a mayuri again.
The composition is so aesthetically composed and the beauty of the lyrics were brought out in vocals and the abhinaya Aniruddha did beautifully in his grandmother’s bani. For this piece, mridangam was by Adyar Gopinath, vocals by T. Girish, nattuvangam by Ravi Subramaniyam, ganjira by Anirudh Athreya and flute by Devarajan, camera by Rio Graphics and Mr. Pictures, camera team: Rajarajan, Girinathan, Haran, Karthik Jeyaraj, Rajesh, Pradeep, Joel, editing by Azad Ali, production by the Balasaraswati Institute of Performing Arts for Narthaki.com. 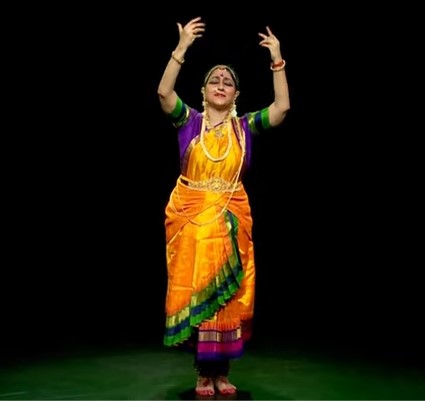 Priya Murle, Bharatanatyam: Meenakshi – Kamakshi – Visalakshi was performed by Priya Murle. ‘Eekshana’ in sanskrit means sight but also caring. The three compositions were by Muthuswamy Dikshitar, eulogizing the devis. In his kritis, he has presented occult knowledge in his compositions on the three goddesses.
The video begins with the beating of drums as Ma Durga is worshipped in Bengal. The costuming of Priya was elaborate and so were her ornaments. Meenakshi is depicted by the hastas for a fish. She resides in Madurai. Her beauty shames the moon and she plays on the veena. Her consort is Sundareshwar and she surrenders to him. She holds the parrot in her hand.
Ma Kamakshi is lotus-eyed, tripurasundari, with the gait of an elephant, manjul charane, shashivadane, kanj mukhe, mandahasane, shankari. The lyrics for each were simply sung and rendered in dance. There was no percussion used, only veena and violin, as far as I could tell. The stances of each devi were elaborated, their divine eyes extolled through a bell playing in the background. Vocals: Nandini Anand, veena: Anjani, nattuvangam: Sneha Mahesh, sound: Rakesh, videography and editing: Iyappan Aarumugam - a4 media, venue: Black Box, Sahrdaya Creative Studios, logo: Lekha Prasad. 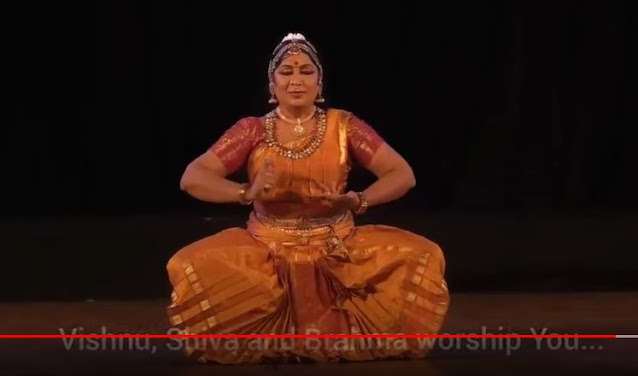 Narthaki Nataraj, Bharatanatyam: Narthaki Nataraj performed an ode to Kottavarai. The background was bare. She wore a bright orange aharyam. Kottavarai is the Tamil warrior goddess. She is one of the earliest forms of the devi to be worshipped in Tamil Nadu by the early people of the region. The verses were taken from ‘Vettuva Vari’ section of ‘Silpathikarm’ by Iilango Adigalon on tribal rituals.
The video started with the images of Durga Puja, where the beautiful eyes of the mother are looking straight at you. Three stone sculptures of the devi were shown which I think must be preserved somewhere, since they made an intriguing watch. Narthaki started with nritta with precise footwork. The depiction and the subtitles showed that the devi wears an elephant skin on top, a tiger’s skin on her waist and stands on the head of a wild buffalo. The hastas for the buffalo were done with precision. The devatas worship her and shower her with flowers. She is bigger than the Vedas and the flame of all knowledge. Again, the hastas for the jyoti were sharp and precise. In fact, in her orange aharyam, Narthaki looked like the jyoti herself. With an interlude of immaculate nritta, she depicted the devi holding a sword over her head. As she stands on the black buck, the trinity worships you. You are a glare more radiant than the sun. The eyes were very expressive. And the piece came to an end as one was expecting more.
For this piece, vocals were by Nandini Sai Giridhar, nattuvangam by Anantha Shree, mridangam by Dr. Gurubharadwaaj, flute by E. Devaraj and veenai by Anjani Sreenivasan. 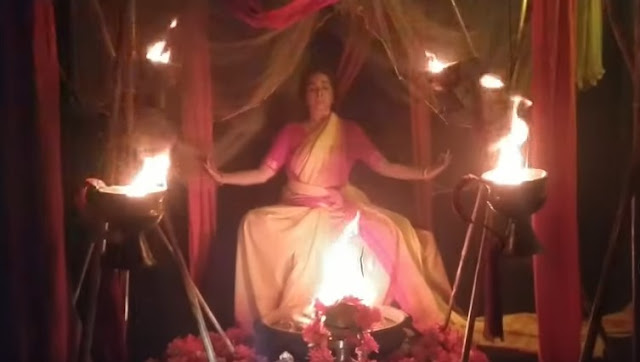 Sharmila Biswas, Odissi: Sharmila Biswas presented Chandi in Odissi. Chandi is worshipped in Bengal with dhak, Chandi Stotra and hibiscus flowers. The language was Sanskrit. The video began with images of the Durga idol before the ornamentation and then after.
Sharmila walks in with the camera showing her mahavar-reddened feet from behind. She is wearing heavy silver anklets, a black saree with a red paad or border. The dramatic gait created the impression of Chandi herself walking in. She lights the lamps around a structure made in the studio with bamboos and cloth. In the centre is a brass plate, around which there are flowers. She places a kalash with the trishool drawn on it in red. Water is poured into it and a dhak or a green nariyal placed on it, which bears a swastik in red. She puts a garland of hibicus flowers on the arrangement. And then she pulls along a white saree with a red border, which is the conventional colour of Durga Puja. She drapes it. All these images of rituals are portrayed very aesthetically with just the mardala playing in the background, and create a mystical aura. The Chandi Stotra follows. A lamp is lit in front of Sharmila, where she had placed the kalash. The chhavi of Chandi is described and depicted. Panch mundhivainim, bandhuk pushpa vasa, wearing a mukut and surya and chandra as the ornaments on her head. Holding a book and a mala, wearing a red saree and mundamala. Bearing the third eye on her forehead. And then the chanting of her names: jayanti bhadrakali, kapalini, depicting her holding a slashed head in her hand. To her bhaktas she endows roop, jaya, yash and removes all obstacles.
Sharmila is adept at portrayals using various elements. The setting of the puja sthala using bamboos and cloth and large pots lit up around her creates the aura of the shakti puja. The first shot of her feet, in fact, takes you on a journey into the puja griha. Then the ritual aavahan with kalash, nariyal and flowers makes you feel the presence of the divine and then the abhinaya for the stotra as fire rages in the pots around her (I hope they had a fire extinguisher ready!). You could almost watch it with your hands folded in awe of the devi. It was presented in memory of musician Shaoni Mitra, who had recited the composition flawlessly in monotone. Mardala was by Haramohan Khuntia, film direction and set design by Neelay Sengupta, editing by Raaginni Hindocha.