In the 18th episode of Sankalp: The Journey Shall Continue, Vidha Lal began with the doha ‘Bade badaayi na kare, bade na bole bol; Rahiman heera kab kahe lakh taka mor mol’ by Abdul Rahim Khan-i-khanan, to underline how true greatness is obvious to everyone without boast or advertisement. Vidha has also dedicatedly picked out some of the young gems of Kathak today from all across the country to provide them a platform during this winter of the performing arts.

The performer for this episode was Arshdeep Kaur Bhatti, who has learnt Kathak from Punjabi University Patiala under Dr. Daisy Walia. Dr. Walia said that Arshdeep’s selection for Sankalp sparked a celebration in the department and among her teachers, and also mentioned that besides being a dedicated dancer, Arshdeep is also a singer and theatre artist.

Arshdeep’s words were fragrant with the tehzeeb wali Punjabi, which was very pleasing to the ear. The first piece she performed was an ode to ardhanarishwara, which Arshdeep depicted through nritta, gestures and stances. She showed the opposites in Ma Parvati and Shiva. The jatas and chandra of Shiva, kumkum of Parvati, bhasma of Shiva… where one has feet adorned with noopur, the other has snakes bound around his feet. Shiva is accompanied by bhoot pret and he is the one who holds the vish in his throat. Ma Parvati is the symbol of Srishti, whereas Shiva symbolizes sanghar. One is the mother of this entire creation and the other the father. Shiva holds the damru in his hand and the final stance of the trishul, taken with a leap and coming to sam, was impressive. There was pace in the dance, without compromising on the grace and precision of movements and stances. 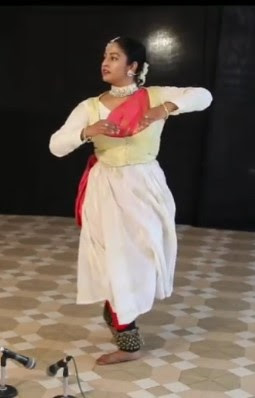 The second section of her presentation was nritta in gyarah matra, rag Shankara. The attitude of the dancer as a soloist was apparent in her padhant, which was assertive and confident. She went on to show thaat with stances, incorporating the bhava of chhed-chhad, aamad with 27 chakkars done with speed and power, footwork, chalan with strong footwork, tukda, paran with ek pair ke chakkar, uthaan, a toda in teen taal, a chakkardar paran with leaps where she popped up and down like a spring. Before the chakkardar paran in the nritta section, she did Holi ke bhava to Suresh Talwalkar’s bols, though for me, it was a little too fast-paced for bhava. The entire section of nritta was handled with great precision and attitude and the confidence of a soloist. 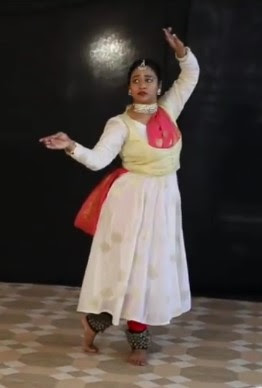 The last part was the bhava section. Here, I would like to present my opinion that whenever a dancer fuses nritta and nritya, the nritta portion performed in the interludes between the bhava should match the mood and pace of the rest of the piece and should not take you away from the soul of the lyrics. However, that is the dancer’s personal choice and this is also just a personal viewpoint, not an expert’s comment. 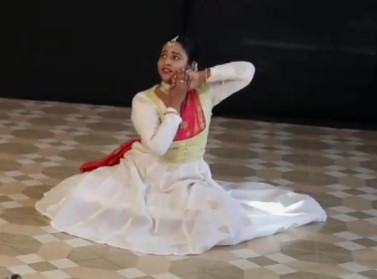 The final piece that she presented was Sufi poetry by the famous poet Amir Khusro, ‘Naina apne piya se lagale, koi nari gawari chahe jo kahe’. She began with the doha ‘Kaga chun chun khaiyo’. The nritta portion was rendered very well, with great pace, power, neatness, precision, intelligent stage coverage, and the entire rendition was done with a lot of perfection. As I was talking about nritta having a soul, we saw that she embellished bits of her nritta with bhava like chhed-chhad, Holi etc., which adds to the interest that is generated in the audience. And for the same reason, I felt at times that the pace and the tempo of the Sufi composition could have been toned down a little to allow the nritta to be in the same mood as the composition. However, Arshadeep wowed with the sheer power of her Kathak, balanced with neatness, control, perfect rhythm and such assured flamboyance. Her effortless kneeling and rising also testified to her exemplary fitness and stamina.

She was accompanied by Gurchetan Singh on the tabla and Yogesh Garg on nagma and vocals. You can watch her performance here: https://www.facebook.com/VidhaLalKathak/videos/424092468613239