Bharatanatyam dancer Sharanya Chandran recently performed online for the Upaj Academy of Performing Arts. Sharanya is the daughter and senior disciple of Guru Geeta Chandran and an accomplished soloist in her own right. This performance was remarkable in many ways: for one, there was a clean canvas on the screen with no distractions. There was ample space to move in the space Sharanya chose, the volume of the vocals was just right, and Sharanya’s eloquent introduction of every piece added to the pleasure of an irritant-free performance. This young but mature dancer has imbibed her guru and mother’s style of dancing but has added her distinct sensibilities to it. The impressive expanse, energy and precision of each move is her hallmark, as are her intelligence, gentle smiles and humility.

The first piece in Sharanya’s performance was a Shiv Stuti, a composition of Dayanand Saraswati, in raag Rewati, sung in a very effective manner by Sudha Raghuraman. Sharanya began by depicting the attributes of Shambhu – the dhyana stance, the nataraja stance, the damru in his hand, pinakinaye, shashishekharaye, shool pani, ambinathaye, ganga dharaye, Nandi, jata dharaye, sadashivaaye, and many more. The rhythm and the music were outstanding, bringing the visuals and feel of Shambhu to life. The nritta had much precision, grace and expanse. In the climax, she depicted the kundalini rising into the sahasrara chakra. The rhythm, the expanse of each complete movement and the vision of a large space available to the dancer and her use of it, and the vocals, all made it an enjoyable experience.

The second piece was an abhinaya piece, a Meera bhajan, ‘Baso mere nainan mein Nandalal’ in raag Kedar. She depicted Krishna's stance with bansuri and morpankh. His heart-warming music emerging from the bansuri, he is giridhari, ghan sanwal or one who is the colour of the clouds, kamal nayan, meena nayan, wearing the arun tilak, neck adorned by vaijanti mala, accompanied by gwal bal. Her eyes followed the pitter-patter of his feet and finally, she took the stance of Gopal. The bhajan has been sung very emotively by Sudha Raghuraman and Sharanya’s abhinaya was very expressive, touching just the right chords. 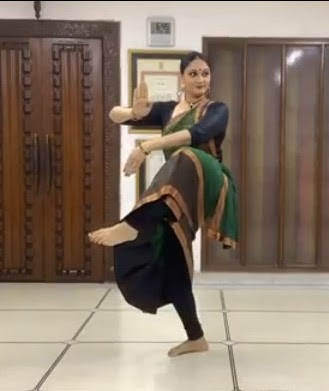 The final piece was a thillana in raag Raageshwari in a cycle of eight beats, dedicated to lord Shiva. The technique was flawless and Sharanya displayed a lot of agility in covering the entire space without compromising on the precision of the footwork. She used multiple korvais in this piece. Her neck and eye movements to the rhythm were remarkable. The final stance she took of Shiva, with the Ganga enthroned in his jata, was very impressive. Apart from vocals by Sudha, the nattuvangam was by Geeta ji, mridangam by Ramamoorthy Sriganesh and flute by G. Raghuraman for all pieces.