It has been a delight discovering very talented and tayyar young Kathak dancers through Vidha Lal’s performance series called Sankalp: The Journey Shall Continue. Kathak dancer and teacher Vidha curates a performance by a young, upcoming Kathak dancer every Sunday which is prefaced by an introduction by the dancer’s guru and is broadcast on Facebook. I am writing my impressions of the Sankalp performances at Vidha’s invitation.

On 13 September, in the seventh instalment, Vidha presented the young dancer Raina Parikh, the disciple of gurus Ishira Parikh and Maulik Shah. Ishira Parikh put it very beautifully when she said that Raina ‘let’s dance adorn her’. That’s exactly what was exhibited in her performance. Raina showed great ease, confidence and style in her dancing, which made her a true stage performer – I can’t wait to see that effortless ownership of the stage in person one day.

Raina started her performance with an ode to Ma Kali, followed by a Durga stuti. The piece was prefaced with very aesthetic nritta. The Ma Kali stuti was ‘Jayanti Mangala Kali’, in which Raina took stances for Ma Kali with her trishul, her tongue hanging out, the vanquisher of all evil. She ended with the Ma Durga stuti ‘Ya devi sarva bhuteshu’, depicting her as shaktiroop, matriroop and dayaroop. Choreography was by her gurus and music was by Pt. Neeraj Parikh. 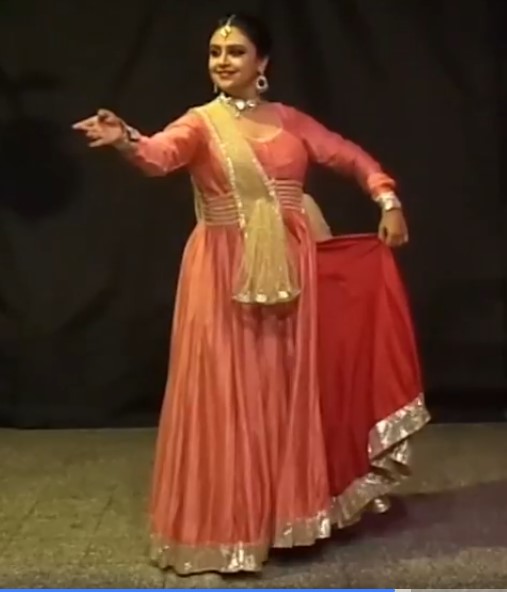 For the technical portion, Raina presented taal Dhamar with the fourteen-beat cycle. Throughout the performance, Raina showed a lot of attitude and confidence in her nritta and the padhant of the bols. She presented tatkar, thaat, tukda and chakkars, very neat, sharp hastak and paran. She was very energetic with leaps and slides, squatting at the sam. She presented ladi with footwork on count. On the whole it was a very neat presentation, displaying her mastery over the technical part of Kathak. But again, the dancer must remember that we are watching the performance either on a computer or a mobile screen. She should make sure that her costume does not hide her footwork. 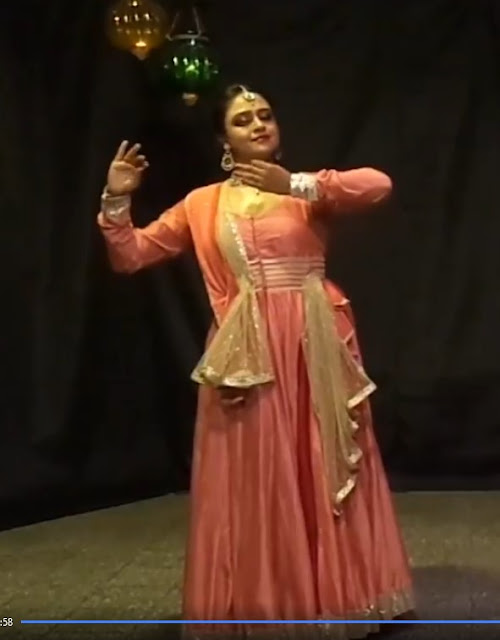 For the abhinaya portion, Raina presented a thumri, ‘Kahe rokat dagar pyare’, on the romance between Radha and Krishna. She presented gat bhaav, acting out both Radha and Krishna. Her ada in presenting the chhed-chhad was very graceful. Krishna was shown as trying to block the path of Radha, who was going to the panghat. In the climax, she presented Krishna playing the flute and Radha retracing her steps as she gets attracted by the madhur dhun, which was quite expressive and graceful.